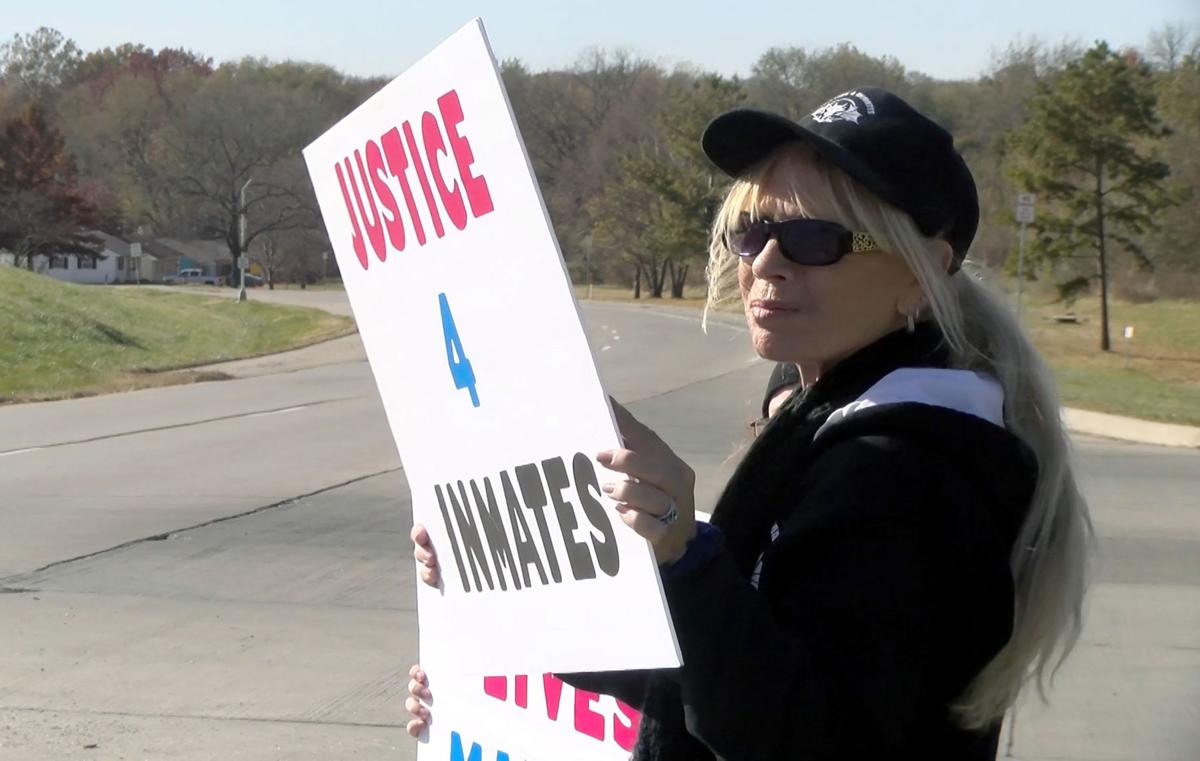 Victoria Ferguson, founder of Justice 4 Inmates, protested outside of the Western Reception, Diagnostic and Correctional Center last week. The group was voicing concerns about medical treatment, drug abuse and visitation rights for the men inside and plans to go to other prisons in Missouri. 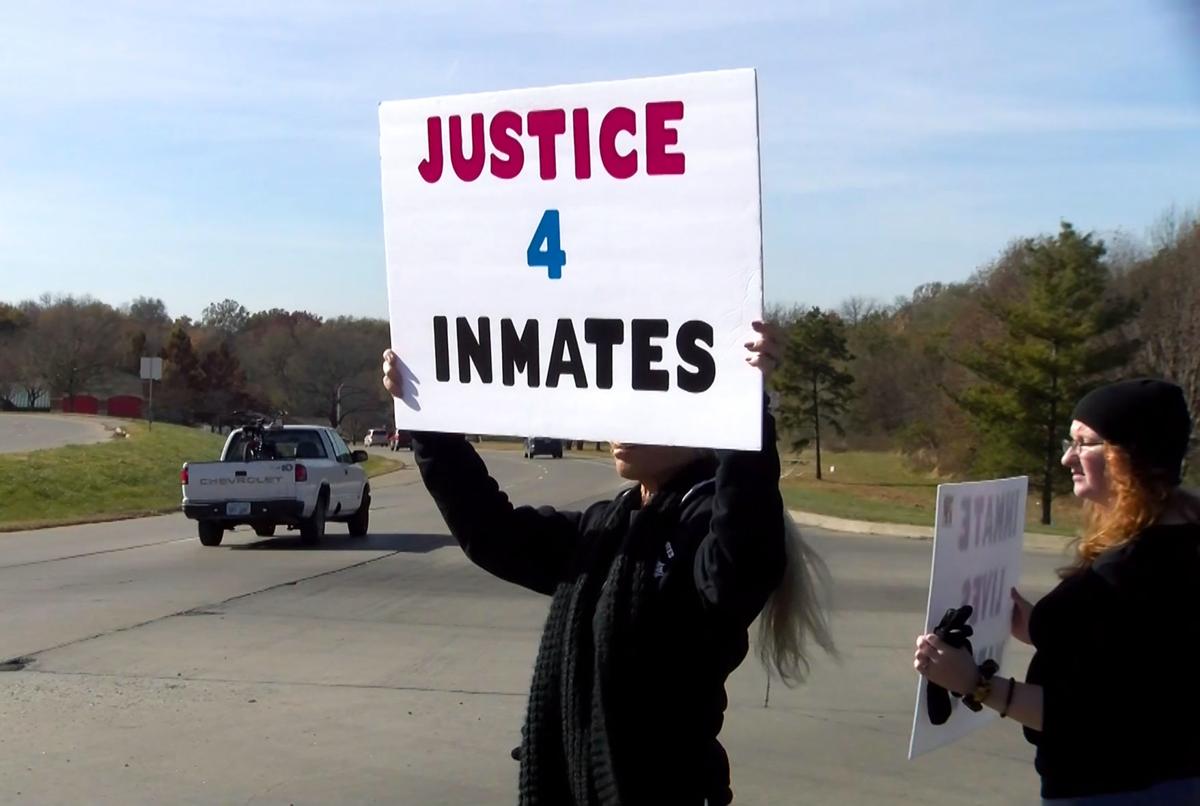 Victoria Ferguson protests in front of the Western Reception, Diagnostic and Correctional Center in St. Joseph. Ferguson said she plans to protest at other prisons and the Missouri capital.

Victoria Ferguson, founder of Justice 4 Inmates, protested outside of the Western Reception, Diagnostic and Correctional Center last week. The group was voicing concerns about medical treatment, drug abuse and visitation rights for the men inside and plans to go to other prisons in Missouri.

Victoria Ferguson protests in front of the Western Reception, Diagnostic and Correctional Center in St. Joseph. Ferguson said she plans to protest at other prisons and the Missouri capital.

Three women stood outside the Western Reception, Diagnostic and Correctional Center recently holding signs saying “Justice 4 Inmates” and “Inmate Lives Matter.” Those who stopped and talked with the group learned they were voicing concerns about medical treatment, drug use and visitation rights for those inside the prison.

St. Joseph was only the first stop on the journey for the group, Justice 4 Inmates, with protests planned outside other facilities and in Jefferson City.

Victoria Ferguson, founder of Justice 4 Inmates, said she began speaking out against the Missouri Department of Corrections when her husband nearly died. Ferguson alleges that while being held in Moberly Correctional Center, her husband had a seizure and was administered Narcan by a guard who thought he was on drugs.

“It rendered him unconscious at that time,” Ferguson said. “He was given it, and you cannot give that to a seizure-disorder patient. It can and it did stop his heart. He went into full cardiac arrest.”

Though her husband survived and has been out of prison for nine months, Ferguson said there are other inmates who have been given improper medical treatment, referencing one man she said did not receive treatment for cancer until it was too late to be treated. She alleged patients are denied treatment for days, and sometimes even months.

“I can assure you that offenders have access to high-quality, on-site medical care around the clock, provided by Corizon Health,” Pojmann said. “As in the outside community, patients make appointments for non-emergency medical concerns, and trained health professionals make treatment decisions.”

Another concern shared by both Justice 4 Inmates and the D.O.C. is substance abuse by inmates. According to the National Institute on Drug Abuse, 65 percent of the prison population has a substance-use disorder, and 88 percent of people in Missouri prisons are engaged in substance misuse during the year preceding their incarnation.

While the D.O.C. offers programs to help those who may be coming into prison with an addiction, Justice 4 Inmates alleges that some still are getting drugs through employees.

“The death rate of men overdosing is just unreal within the Department of Corrections,” Ferguson said. “They blame the family, and obviously with staff being arrested on it, the public sees it’s not just family. It is a lot of staff.”

Ferguson was referring to Dallas Twyman, a corrections officer in Moberly who was found with a meth pipe in his duty belt during a patdown by a senior officer, according to court documents. The man was fired for his offense, but he was not charged with distributing drugs, according to Pojmann and court documents.

“We investigate and may terminate any staff member suspected of bringing contraband into a facility,” she said.

Though Twyman was not charged with distributing the drugs, Ferguson claimed there were inmates who overdosed the Moberly prison last week. Pojmann denied that allegation.

“There have not been any confirmed drug overdose deaths at Moberly Correctional Center in 2019 or 2018,” Pojmann said. “Recently there were deaths from natural causes, following long illnesses, as well as two deaths with unknown causes. We are still awaiting autopsy reports. Moberly Correctional Center has a dialysis unit and therefore holds a larger number of offenders with serious illnesses.”

Along with drugs and medical treatment, the protesters also said they were concerned with visitation rights. Jessica Upton said her husband was inside the Western Reception, Diagnostic and Correctional Center, and she had been denied visits to him.

Upton’s husband currently is incarcerated for a domestic violence case, but Upton said she is not the victim in the case.

“They have paperwork proving that I’m not the person on this case, the reason why my husband’s currently incarcerated here, and yet they’ve still denied visits to my husband,” Upton said. “He’s been in county (jail) before, but with county, we visited him there, but here it’s it’s a whole different ball game.”

According to the Missouri Department of Corrections’ visitation guidelines, several things can prevent a visit from occurring, like the improper filing of a visitor applications, criminal background checks, previous incarcerations, violating the dress code, violating the rules of conduct or safety concerns for staff, inmates and visitors.

Members of Justice 4 Inmates plan to continue protesting, with plans to go to Moberly on Nov. 23, the DOC offices on Dec. 6 and the Missouri capital on Jan. 23. Ferguson said she also is talking with lawmakers like Sen. Ed Emery, who serves on the prison committee, to make the D.O.C. listen to their requests.

“Stop prioritizing the cost of of a treatment over a human life,” Ferguson said. “Their punishment is to go to prison, not to be punished and left just to die. Literally, they’re dying.”