The Parks Tax Citizens Committee finished its project list Wednesday night. The list names close to 40 projects that could receive generated revenue from the proposed tax.

The process was a long one. Parks Director Chuck Kempf gave the committee a long list of park projects that needed funding. This list totaled more than $77 million. Over four meetings, the committee trimmed that down to a total of about $60 million. 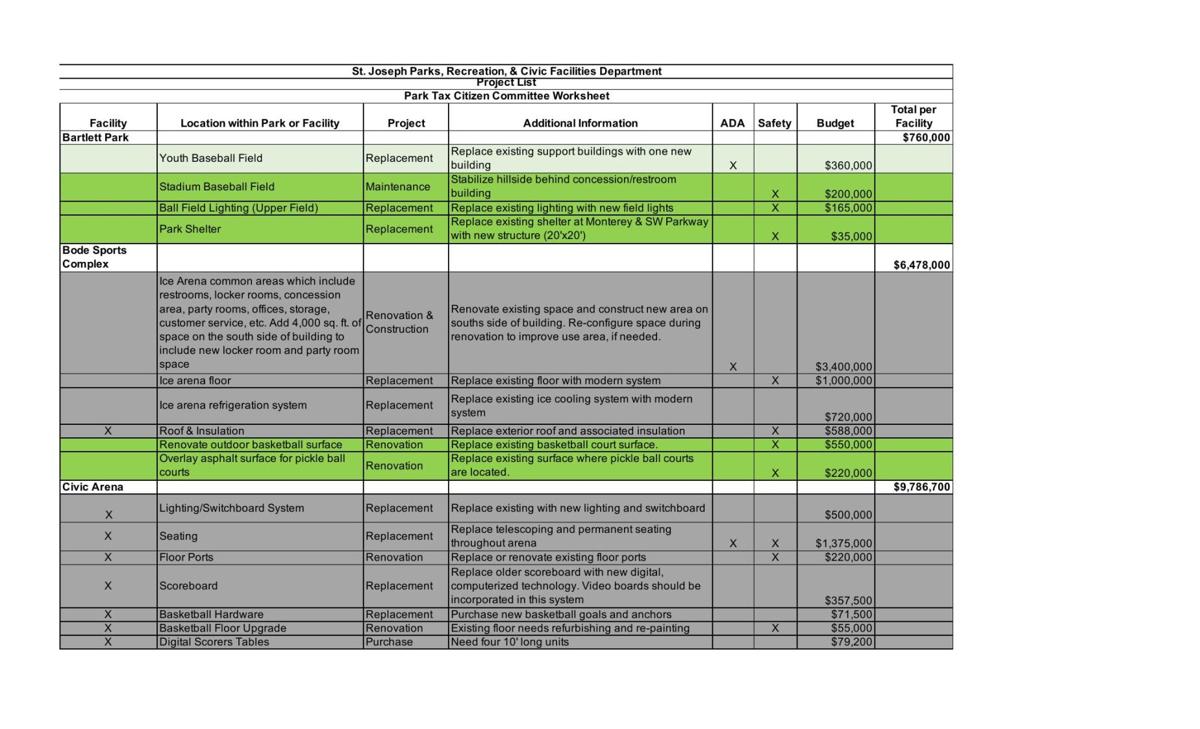 “This was a lot of money,” said Chris Clark, the committee chairman. There's a lot of need, there's a lot of passion in a lot of these projects. I'm extremely happy that we were able to come together and get the job done.”

The projects that would receive the most money are Krug Park at $12.775 million, which includes the amphitheater, the children’s circus and the castle, and the lap pool at the aquatic center for $7.7 million.

The top priority for the committee was to take care of what the parks department already has. This is why Krug Park was the first project chosen by the committee. It is also why more than $6 million was added to the list to address restrooms, lighting, sidewalks, shelters and playgrounds throughout the parks system.

“Walk through our parks, you can see the dilapidation and you can see that there's not enough resources or funds there to make that happen,” Clark said “So us, as the committee, saw that walking in day one, minute one, that we need to take care of what we've got.”

The committee also emphasized diversity, not only geographically but also in the types of projects. For example, the committee set aside $2.4 million for a park on the east of town. The project includes a playground and a dog park.

“I'm very happy with the final list,” Clark said. “I think we show a very wide cross section geographically in need across the entire city. A lot of people have a lot of passion and a lot of heart and a lot of emotion tied to a lot of these places.”

Many residents were concerned that the tax revenue could be used on civic facilities, such as Civic Arena. The committee was well aware of the residents’ apprehension and it was discussed at length during the meetings. However, the parks department listed Civic Arena as a top priority, so the committee added $1.2 million of structural repairs at the arena to the list. This includes the roof, floor and lighting.

The committee added another $1 million to the list for Civic Arena but with a caveat. Before those funds can be allocated, other funds have to be raised by public or private sourcing.

Although the committee unanimously approved this list of projects, it can still be changed. The committee will present the list to the St. Joseph City Council on Tuesday during a work session. City staff will recommend a priority order for the projects over the 10 years. But the council has the ultimate authority and can make any changes to the list or priorities.

Once the list is determined by the city council, the campaigning begins. The committee still has a lot of work ahead, as they have to educate and convince voters in a short time before the August 3 election.

“If you enjoy the park system and you would like to see it in a better place, I don't think there's a an option,” Clark said about voting for the parks tax.

Here is the current primary list of projects in monetary order (can still change):

Here is the current supplemental list of projects in monetary order. These projects will be completed if there is leftover revenue (can still change):