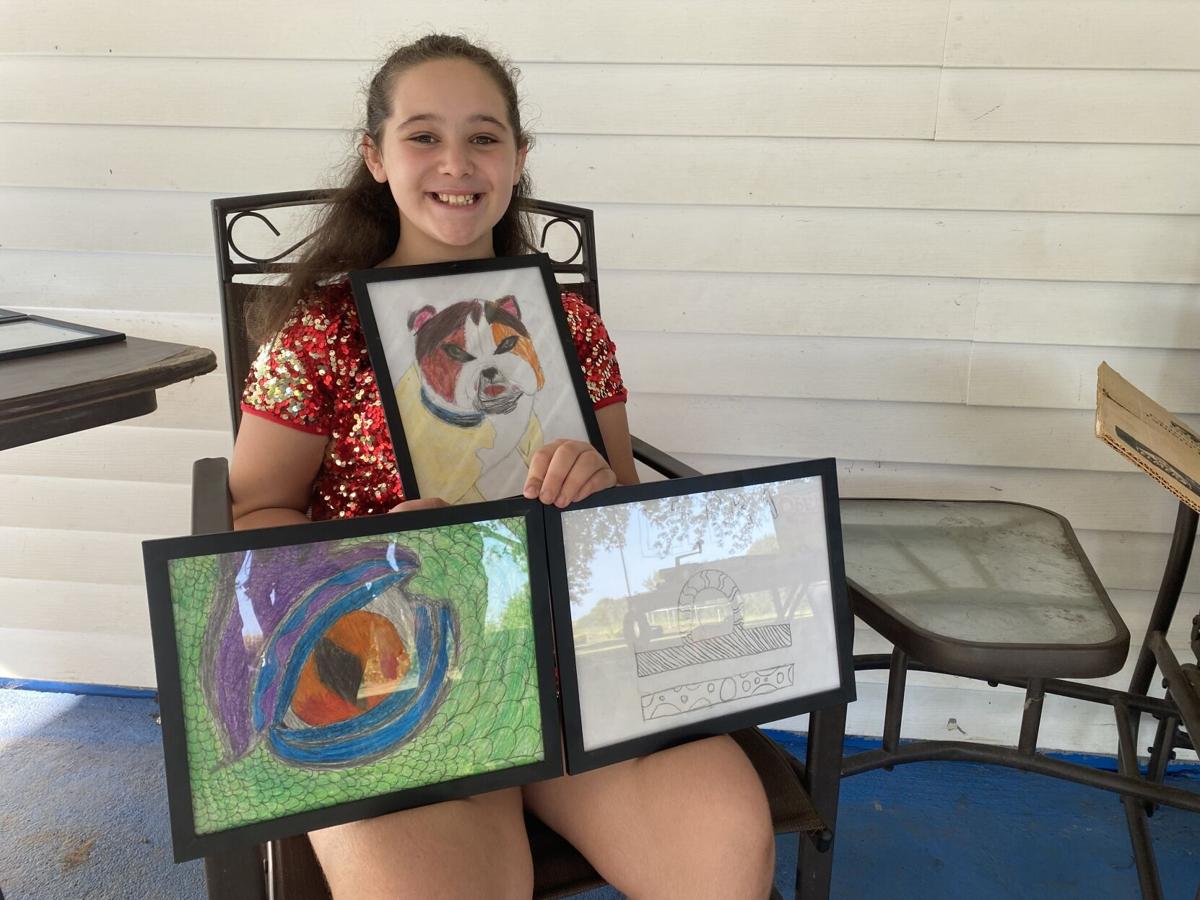 Fourth grader Ellissa Brown shows off a few of her favorite pictures that she has drawn. She is selling drawings to raise money for 62-year-old Larry Hansen and has already raised over $340. 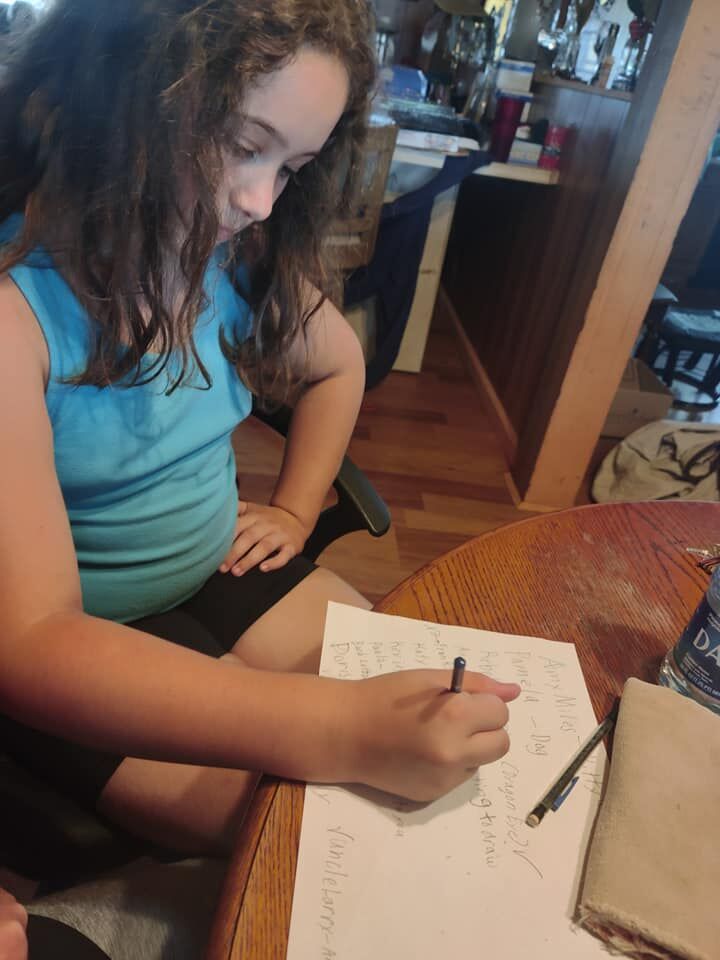 Ellissa Brown writes down requests for her drawings. She has always loved to draw, and her mom said she has never drawn a stick figure.

Fourth grader Ellissa Brown shows off a few of her favorite pictures that she has drawn. She is selling drawings to raise money for 62-year-old Larry Hansen and has already raised over $340.

Ellissa Brown writes down requests for her drawings. She has always loved to draw, and her mom said she has never drawn a stick figure.

One fourth grader from Maitland, Missouri, has started a ripple effect of selflessness.

Nine-year-old Ellissa Brown is drawing pictures and selling them to raise money for 62-year-old Larry Hansen, or as Ellissa knows him, Uncle Larry. Hansen was diagnosed with stage four lung cancer earlier this year, and Ellissa wanted to help him financially.

One night, Ellissa’s grandma, Lisa Tittsworth, was video chatting with one of Hansen’s family members about his illness. What Tittsworth didn’t know was that her granddaughter was listening in on the conversation.

“I go over and I sit in my recliner and there on the table beside me was a little notepad,” Tittsworth said. “It says, ‘Money for Larry.’ This picture 50 cents, front and back 25 cents, and that’s kind of what started this all.”

Ellissa’s goal was to raise $300 by selling her individual drawings for a few cents each. But when she began to doubt her goal, her aunt took to social media. Ruby Brown posted her niece’s fundraiser on her Facebook page, and it took off. In less than a week, Ellissa had raised $340 and still has more orders on the way.

“We had people be like, ‘Oh, I’ll take $25 for a detailed picture’ or this or that, and it kind of just kept stacking up,” Ruby Brown said.

Some people request certain drawings from Ellissa and others let her draw whatever she wants. Her favorite things to draw are zodiac signs, but she draws lots of animals, as well. One of her favorites is a dragon eye that she came up with on her own. One person sent her a picture of their dog that Ellissa recreated.

One day, Ellissa even begged her mom, Lacey Brown, to let her stay home from school just because she had so many pictures to draw. Her mom still made her go to school that day, but she said a lot of her free time is spent drawing pictures right now.

After Ellissa shared her idea for a fundraiser, the rest of her family followed suit. They started a Go Fund Me page in Hansen’s name that has currently raised over $500, and they are putting together gift baskets and taking item donations to auction off. Ellissa’s mom and aunt laughed about how their fourth grader started the fundraising.

“The 9-year-old started it,” Lacey Brown said. “So we’re just going to follow lead with the 9-year-old this time.”

Unlike Ellissa’s goal of $300, her family members don’t have a specific amount of money they’re trying to raise. They said Hansen is a paycheck to paycheck kind of person, and they are raising money to help him pay for treatments that he has already received and any other expenses that he currently needs, such as a nurse, oxygen or just bills that might need to be paid.

“The least we can do for him is make sure whatever time he does have left is well spent with no worries,” Tittsworth said. “Don’t worry about the hospital bills, don’t worry about your house bills, because they’re going to get paid. I think that’s our goal.”

Tittsworth first met Hansen 33 years ago and said he’s been in her family’s life ever since. While only a friend, he feels more like family to the Browns as he’s been around for all of Lacey and Ruby Brown’s lives, and all of Ellissa’s as well. Tittsworth said he is someone they can always count on.

“No matter what, no matter how far away we were, if these kids had a birthday party, if it was Easter, or whatever, he was there. He would drive, it didn’t matter where, he’d be there,” Tittsworth said.

Hansen was diagnosed with stage four lung cancer in July and spent a little over a month at Truman Medical Center before spending a few days at Mosaic Life Care. Tittsworth said the cancer has metastasized through his entire body, and he has since been sent home, and the doctors say he doesn’t have much time.

The family has been trying to see Hansen as often as they can, and Ruby Brown said they recently dropped off some money that they and Ellissa had raised.

“He’s a private person but never wants to take help. So I think that’s kind of hard for him,” Ruby Brown said. “We took today and gave him what we collected so far, and he kind of had this little grin on his face.”

Ellissa is happy to be helping and drawing pictures for people, but she didn’t quite know how to explain how it made her feel.

“I don’t know, it’s like all emotions mixed together,” Ellissa said.

She said she hopes to inspire others to be good people. Her family said they were moved to tears by her servant’s heart, and they hope this story encourages other people to help, too.

“If a 9-year-old can help, there’s plenty of others that can join in on the giving,” Ruby Brown said. “Anything goes a long way.”

“I would hope when other kids would see her story, what she’s trying to do, for her age and what grade she’s in, I would really hope that other kids out there would want to do similar things … hopefully that will put some kindness back into the world,” Lacey Brown said.

Morgan Doyle can be reached at morgan.doyle@newspressnow.com