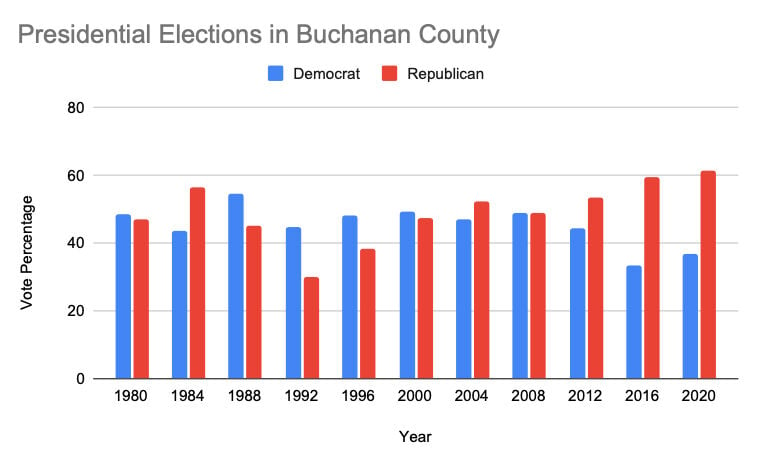 News-Press NOW conducted an analysis of general elections held in Buchanan County between 1980 and 2020. 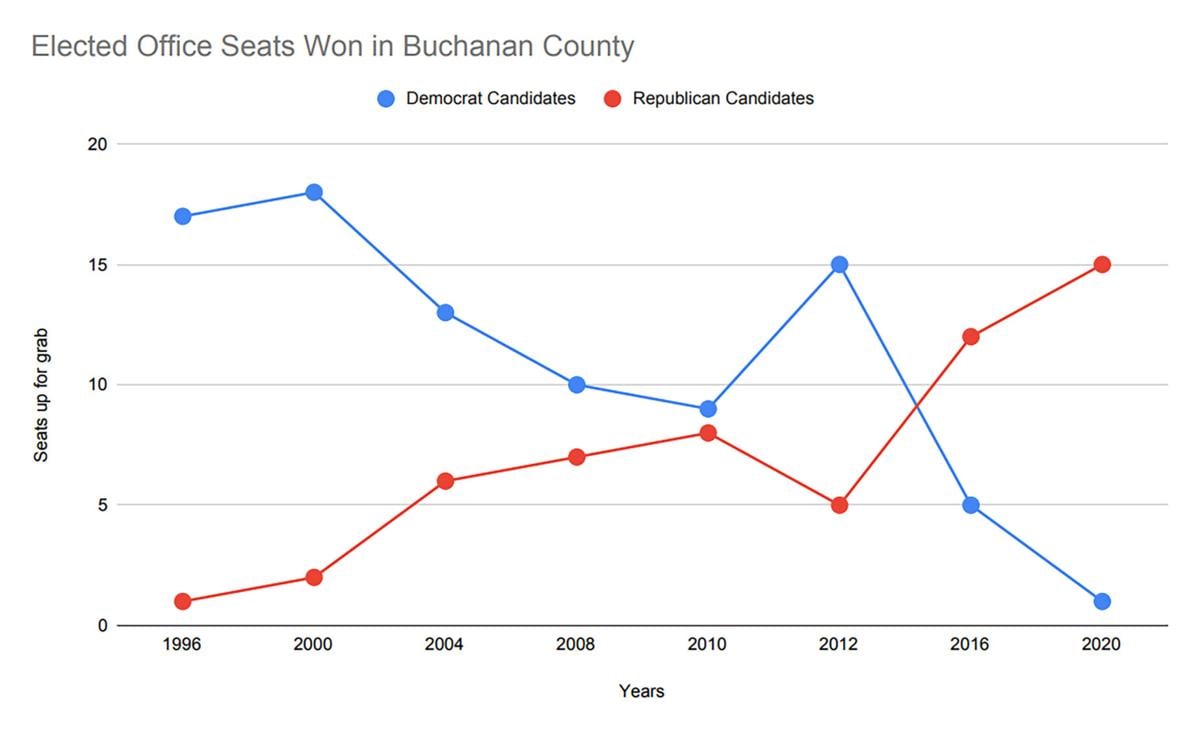 News-Press NOW conducted an analysis of general elections held in Buchanan County between 1980 and 2020.

Buchanan County hasn’t always been a red county as far as voting Republican in the general elections. Back in the 1980s, the county was very much dominated by Democrats.

Even in the general election held on Nov. 7, 2000, Democratic candidates won 18 out of the 20 offices up for grabs – including national and local races. In Buchanan County, Al Gore defeated George W. Bush for president, Bob Holden defeated Jim Talent for governor. Even U.S. District 6 Rep. Sam Graves was outgained in votes by Democrat Steve Danner locally.

The 2020 general election showed a stark contrast, with 15 out of the 16 elected official seats going to Republicans.

Conway, a Democrat, was the Buchanan County clerk, serving as chief election official locally, for 27 years, beginning that service back in 1982. He then moved onto the Missouri legislature as the District 10 representative between 2010 and 2018.

“I think (1980), I think that was the beginning of the turning point,” Conway said. “When (Jimmy) Carter ran for reelection, he barely won Buchanan County.”

In that year, Carter won the county by one percentage point against Ronald Reagan. But, of course, Reagan won the nationwide election and became the 40th President of the United States.

Presidential candidates running on the Democrat ticket would win Buchanan County in the next four general elections, but the red shift was beginning for local offices.

“I think beginning in 1990, when Charlie Shields got elected as a Republican (to State Representative District 9), and he was kind of the forerunner of a lot of the Republican efforts in Buchanan County,” Conway said. “(It) culminated in being fairly successful over the next 30 years.”

Shields was the first Buchanan County Republican to be sent to the Missouri House of Representatives since 1946.

Democratic candidates for president still held a strong preference in Buchanan County until 2004. President Barack Obama won the county by 54 votes in 2008 and since then, voters have overwhelmingly supported Republican candidates for the nations top office.

The case can be made that union workers used to be a stronghold for blue votes, but the manufacturing plants on the South Side and the former Goetz Brewery on the North End have lost those roots.

“Because of their linkage, you know, going back to the FDR and (Harry S.) Truman days, their family were Democrats, and they voted Democrat,” Conway said. “I think when the industries started having to leave, the unions lost a lot of their clout, and subsequently, the Democratic Party lost a lot of their solid votes.”

Democratic candidates narrowly won Buchanan County overall in 2008 with 9 elected offices out of the 17 available.

In 2010, another red wave was hitting Buchanan County, and much of the rural areas in the state of Missouri.

“I became the last Democrat outside of a metropolitan area to be elected to the State House north of I-70,” Conway said. “In subsequent elections, all of the Democrats now are in St. Louis, Kansas City, with the exception of a couple in Boone County and a couple in Greene County.”

Buchanan County did switch back to blue in 2012, with 15 out of the 20 elected offices going to Democrats, but since then Republicans have held the advantage.