Hospital officials worry a new travel stop in Cameron, Missouri, will impede emergency vehicles, but a Clinton County judge has ruled construction can continue for now.

Cameron Regional Medical Center has filed a lawsuit against Love’s Travel Stop and the city of Cameron, Missouri.

According to its filings, officials at the medical center believe the placement of a travel stop across the street from the hospital could cause pollution and impede emergency vehicle traffic because the road is narrow.

“In making this determination, the court finds that the harm suffered by CRMC, at this point, is not greater than that which will be inflicted on some of the defendants,” the judge wrote in an online court filing. “Regardless of the type of facility to be built on this site, the construction now underway would be a necessary part of that process.”

Cameron Regional Medical Center named Love’s Travel Stop, the city of Cameron, the city council and members of the city’s zoning board in the lawsuit.

City officials believe they had no choice but to grant Love’s Travel Stop a permit because the company met all requirements of conducting business in a “Commercial #2” zone.

“As far as we’re concerned, Love’s Travel Stop is coming here, and the city is very happy about that,” said Steve Rasmussen, the Cameron city manager. “We’re happy because of the large number of jobs, the revenue and the economic development.”

A spokeswoman for the hospital said in a statement that the organization supports a Love’s Travel Stop coming to Cameron, just not to the location next door.

“We remain deeply concerned at the precise location and its impact on our ability to provide timely and urgent care,” said Carol Arthur, the hospital’s marketing director. “Cameron Regional has offered to support moving the potential location approximately 300 feet to decrease congestion substantially while maintaining the general location ... for the community.” 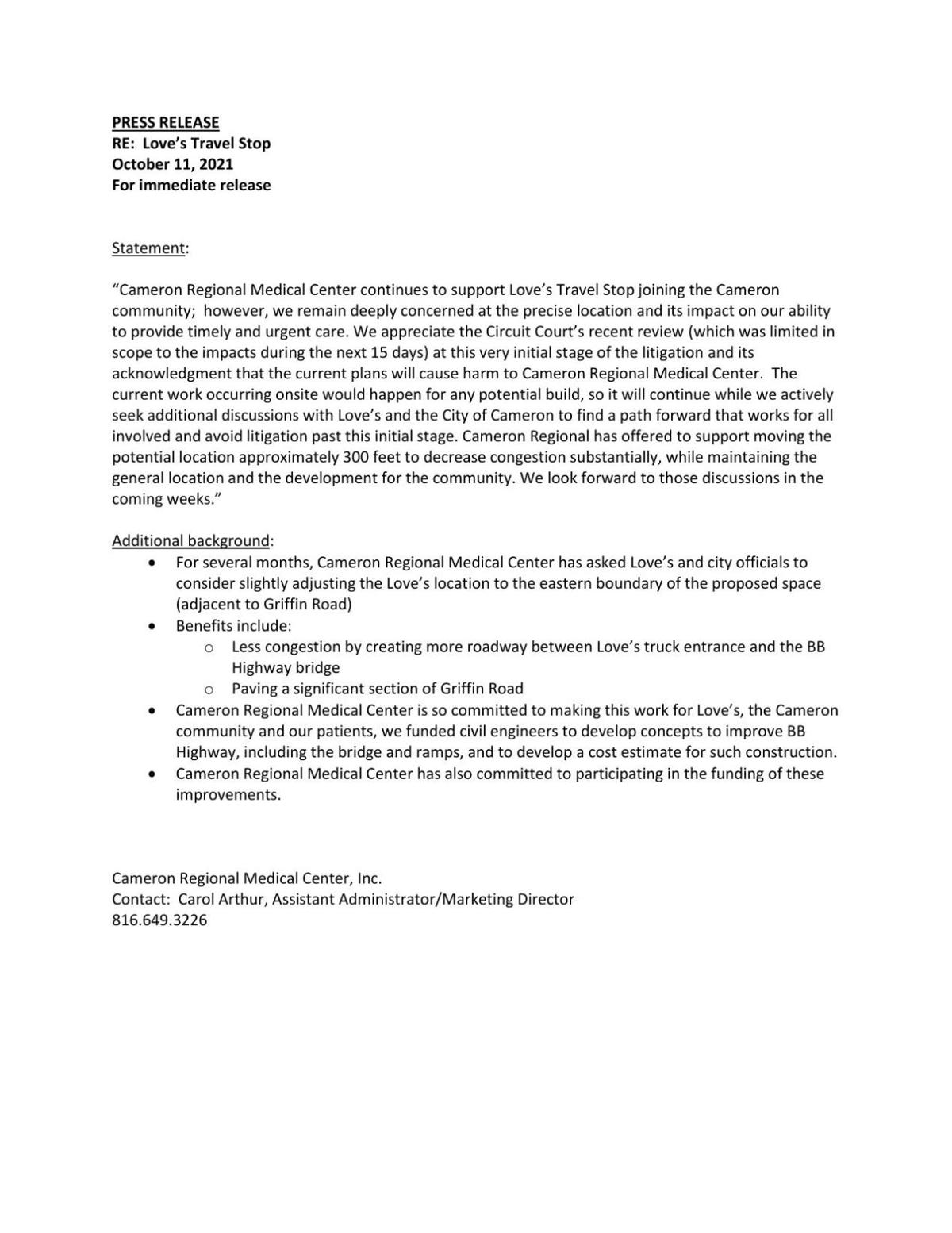 According to The Clinton County Leader, lawyers for the city told the judge at a hearing last week that the owners of the hospital had a chance to buy the property Love’s wants to develop but declined to do so.

The hospital also argued that two members of the zoning board are city employees, and thus their votes to approve the travel stop were invalid.

Judge Darren Adkins was unpersuaded by the hospital’s arguments and denied a temporary restraining order to stop construction. A hospital spokesperson said the judge’s review was limited in scope to the impact on the hospital in the next 15 days.

While the hospital’s request was denied, the litigation continues. Adkins noted that any harm the hospital has suffered could still be repaired.

Online court records indicate another hearing date has not been set in the matter. Rasmussen told News-Press NOW that he hopes the city now can settle with the hospital out of court.

The medical center and the new Love’s Travel Stop are located just off Interstate 35.