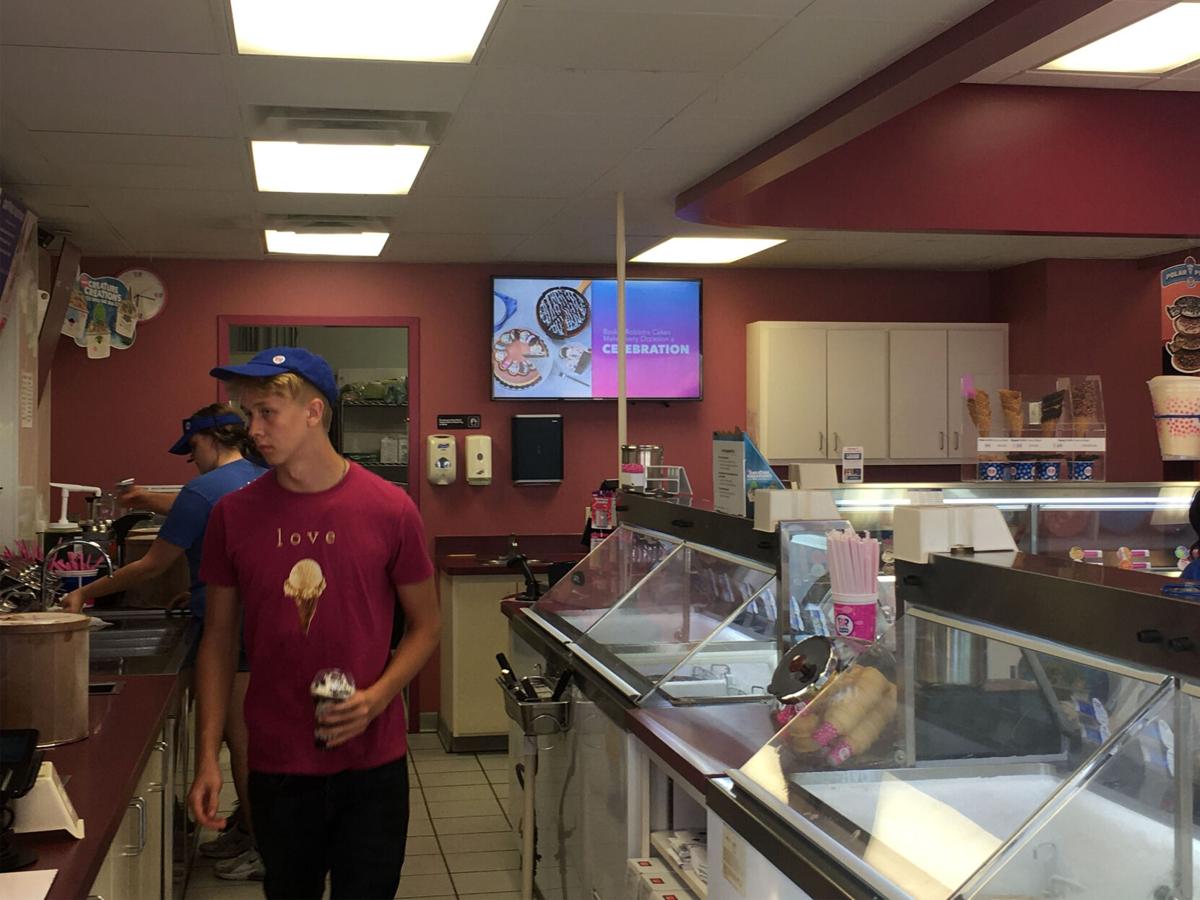 Garrett Wallace serves up ice cream at the Baskin-Robbins in St. Joseph. The franchise owner limited in-store hours on school nights because of staffing issues but has been able to remain open seven days a week. 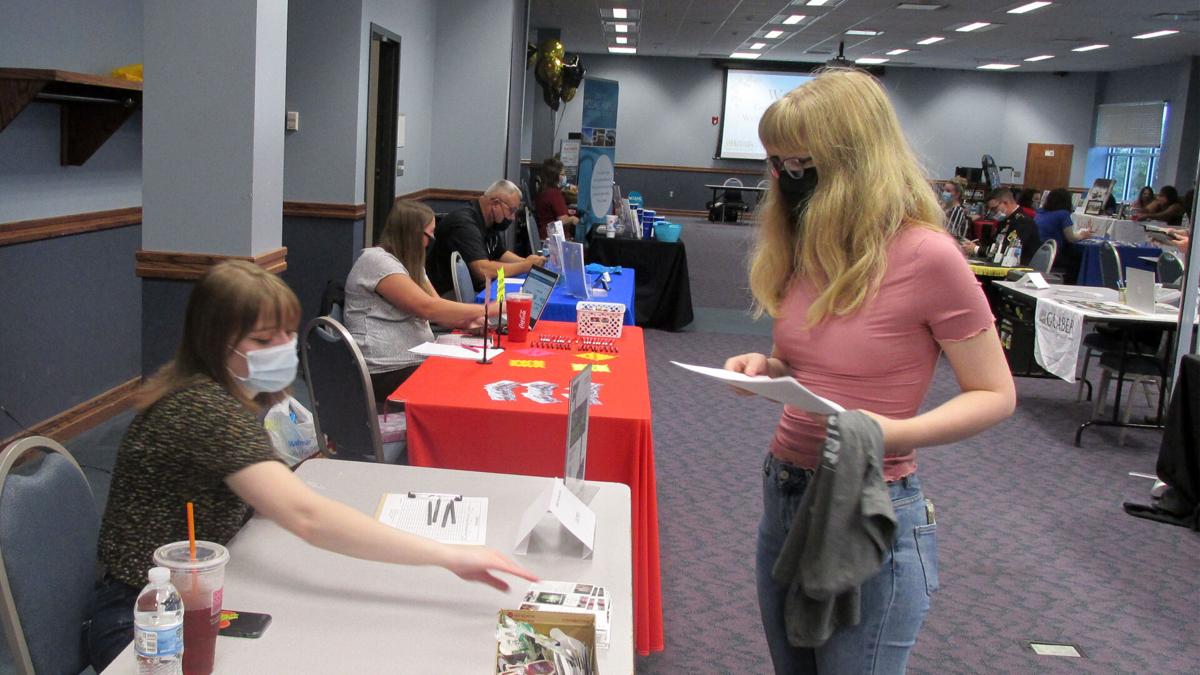 Rian Thierry, right, talks to a prospective employer at a Missouri Western State University job fair. She said she wants to eventually get a job so she doesn’t burn through her savings for college.

Garrett Wallace serves up ice cream at the Baskin-Robbins in St. Joseph. The franchise owner limited in-store hours on school nights because of staffing issues but has been able to remain open seven days a week.

Rian Thierry, right, talks to a prospective employer at a Missouri Western State University job fair. She said she wants to eventually get a job so she doesn’t burn through her savings for college.

When Ryan McDowell bought the Baskin-Robbins franchise in St. Joseph, he never realized it would be this hard finding employees to scoop ice cream.

But the ice cream shop had its own booth at a recent Missouri Western State University job fair, along with banks, social service providers, clothing retailers and a bowling alley. There was even a manufacturer advertising $1,000 signing bonuses.

They were all chasing the one element that’s become scarce in this economy: workers.

“We’ve always wanted a restaurant,” said McDowell, who bought the franchise with his wife, Anna. “It’s so hard right now to keep a full staff. We spend as much time trying to recruit people as we do trying to run the store.”

On the other side of town, the St. Joseph School District faces its own staffing challenges, searching far and wide to fill about 120 teaching openings every year. This year, Dr. Brian Kraus looked all the way across the Pacific Ocean. The district is bringing in six teachers from the Philippines to fill some key positions in math and science.

“It was kind of a working-outside-the-box strategy for us to try to fill some of our hard-to-fill positions,” said Kraus, the district’s director of human resources. “Unless it happened a long time ago, it’s new to the district. I know it hasn’t happened in the last five years.”

On this Labor Day, employers large and small might be asking the same question: Where have all the workers gone? The answer is complicated.

Missouri’s labor force participation rate, which measures active employees and those searching for work against the total working-age population, bottomed out at 60% in May of last year. It stood at nearly 64% in July, close to where it was in July of 2019, before the pandemic.

“Before the pandemic, we had a very tight labor market,” said Dr. Mardy Leathers, director of Missouri’s Office of Workforce Development. “We still see that strain and stress on the labor market. We still have some people on the sidelines that we need to be able to bring back into the workforce.”

Some have pointed to expanded unemployment benefits keeping workers on the sidelines. Leathers said that played a role, but the labor shortage remains after the benefits expired in Missouri. Surveys point to lack of transportation and child care as major reasons for people leaving the workforce. Some parents with school-age children may be reluctant to take jobs until they’re sure schools will remain open during the pandemic, Leathers said.

“As of last week, we had well over 85% of schools back open,” he said. “Hopefully this will make people feel more confident about going back into the labor market.”

For employers, one of the biggest challenges has nothing to do with child care, transportation or unemployment benefits.

The 2020 census showed a 2.4% increase in Missouri’s population, growth that was steady if not spectacular. The overall number masks trends that should be deeply concerning to employers. Missouri saw an 8.8% decrease in its younger population, those below the age of 24. The group between the ages of 45 and 54 — prime years for working adults — fell 8.1%.

At the same time, nearly 1 in 5 Missouri residents is over the age of 65. The population is graying, a dynamic that spells trouble for employers as well as schools.

“On the upper end, we have a lot of people aging out of the workforce,” he said. “On the lower end, we have fewer people coming in, and in the middle, we have this hole. It’s a frustration for employers. They want to say, ‘Hey, I don’t have anybody to work in food service, or hospitality or some of these entry-level jobs because the youth are missing. I am losing all my institutional talent because the older workers are leaving.’”

For the St. Joseph schools, one statistic proves especially troubling. In the last five years, Missouri colleges have seen a 14% decrease in students pursuing teaching degrees.

“For the foreseeable future, it’s going to be difficult to attract and retain teachers,” Kraus said.

The teachers from the Philippines won’t solve all the staffing challenges, but they help in a small way. There will be two at Benton High School, one at Central, one at Lafayette, one at Robidoux Middle School and a special education teacher who is yet to be assigned. Only three have arrived so far, and all will undergo a background check and other paperwork reviews before being allowed to teach in the classroom. All of them speak good English, Kraus said.

“We’re learning as we go along,” he said. “At the end of the year, we’ll evaluate if it’s something we want to continue. They’re all excited to be here. I don’t have any doubt their content knowledge is good.”

One question is whether new hires will be able to keep pace with those who continue to leave the workforce. A statistic called voluntary quits tracks workers who choose to leave their jobs. The nation broke a record for voluntary quits in June and July, with many older workers accelerating retirement plans because of the pandemic. Unlike the recession of 2008, when the stock market tanked, it’s easier to walk away because 401(k) retirement plans fared well during the pandemic.

“That’s very unique from the last recession,” Leathers said. “There’s an inflection point where individuals are saying, ‘OK, is it worth staying at work any longer? I just got through this pandemic. I’m at risk.’”

The void, ultimately, will have to be filled by young people like Rian Thierry, who attended the job fair at Missouri Western last week. She’d like to find work so she doesn’t burn through her savings, but she’s in no hurry.

“It isn’t really that important,” said Thierry, a freshman. “I haven’t really looked that much.”

At Baskin-Robbins, McDowell still remembers walking to his first job when he turned 15. Now, he said, only about half of applicants even show up for an interview.

Still, he’s hopeful that some will take him up on a job offer. His trump card doesn’t revolve around census dynamics or the minimum wage. It’s that most people like being around ice cream.

“We try to make this a fun place to work,” he said. “This is a place where people will come in, and they’re happy to give you their money.”