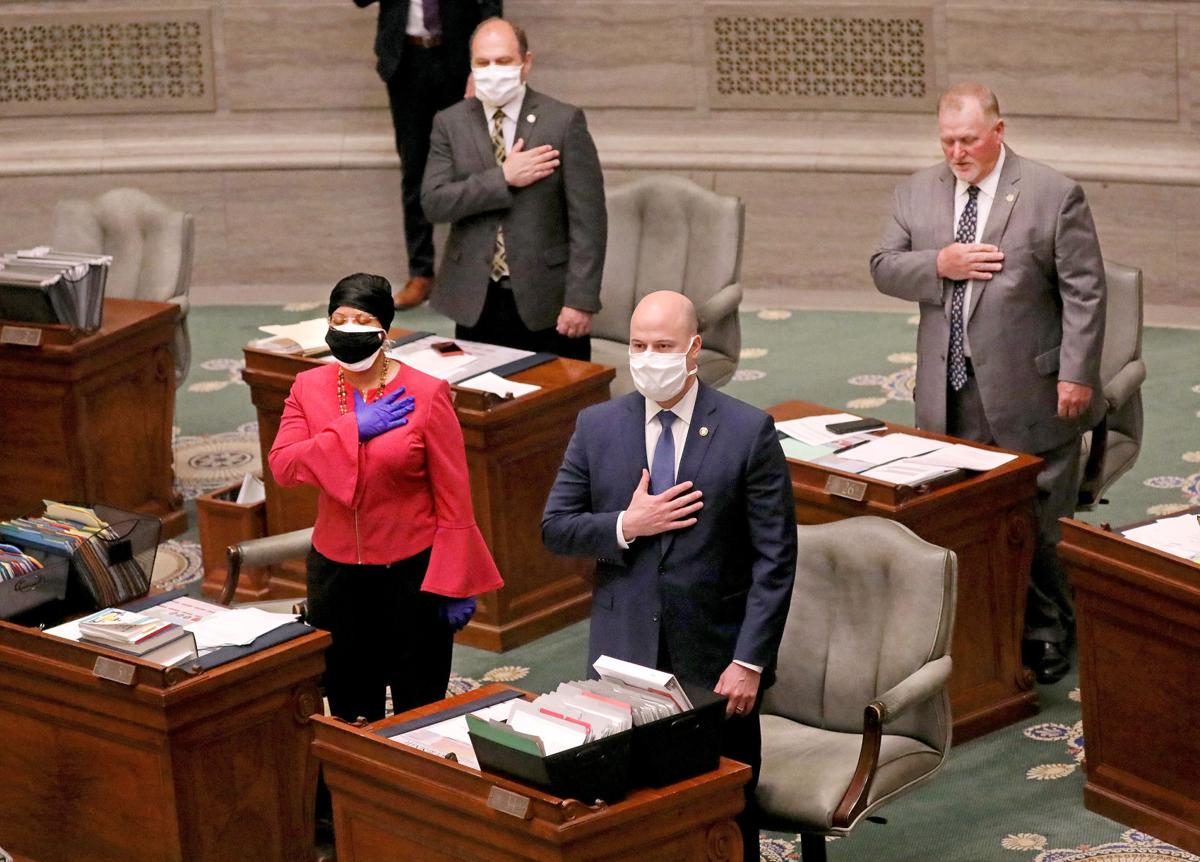 Missouri State Sen. Jamilah Nasheed, D-St. Louis, stands alongside Sen. Tony Luetkemeyer, R- Platte County, during the pledge of allegiance at the state of the session April 8 in the Senate at the Missouri Capitol in Jefferson City. Lawmakers plan to reconvene later this month to tackle a looming budget shortfall. 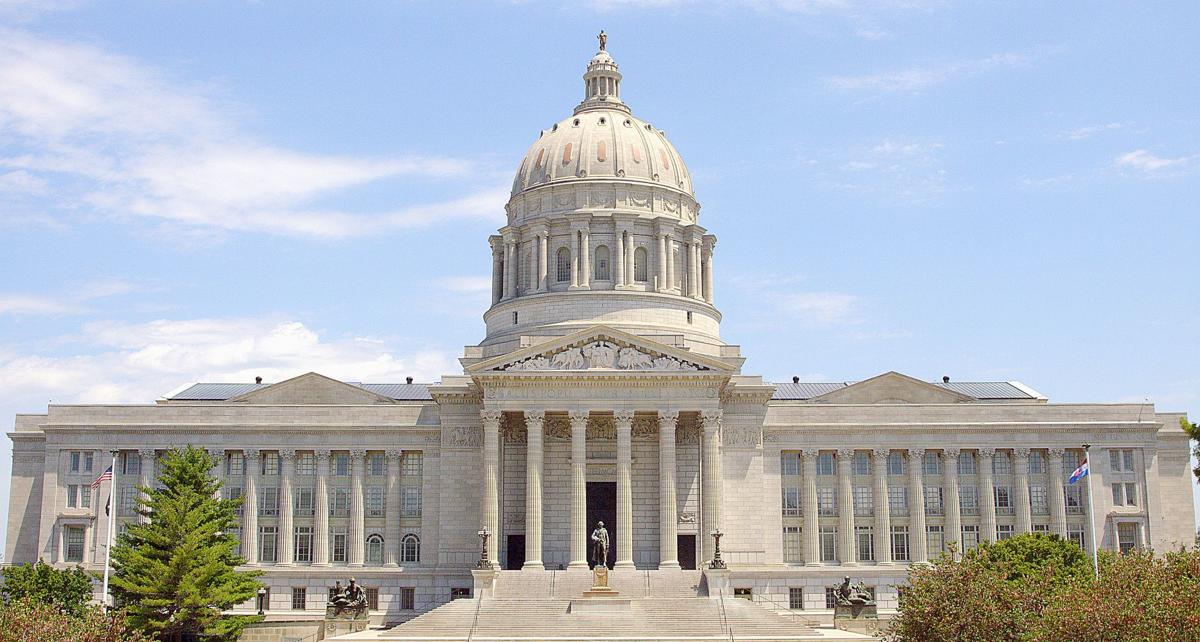 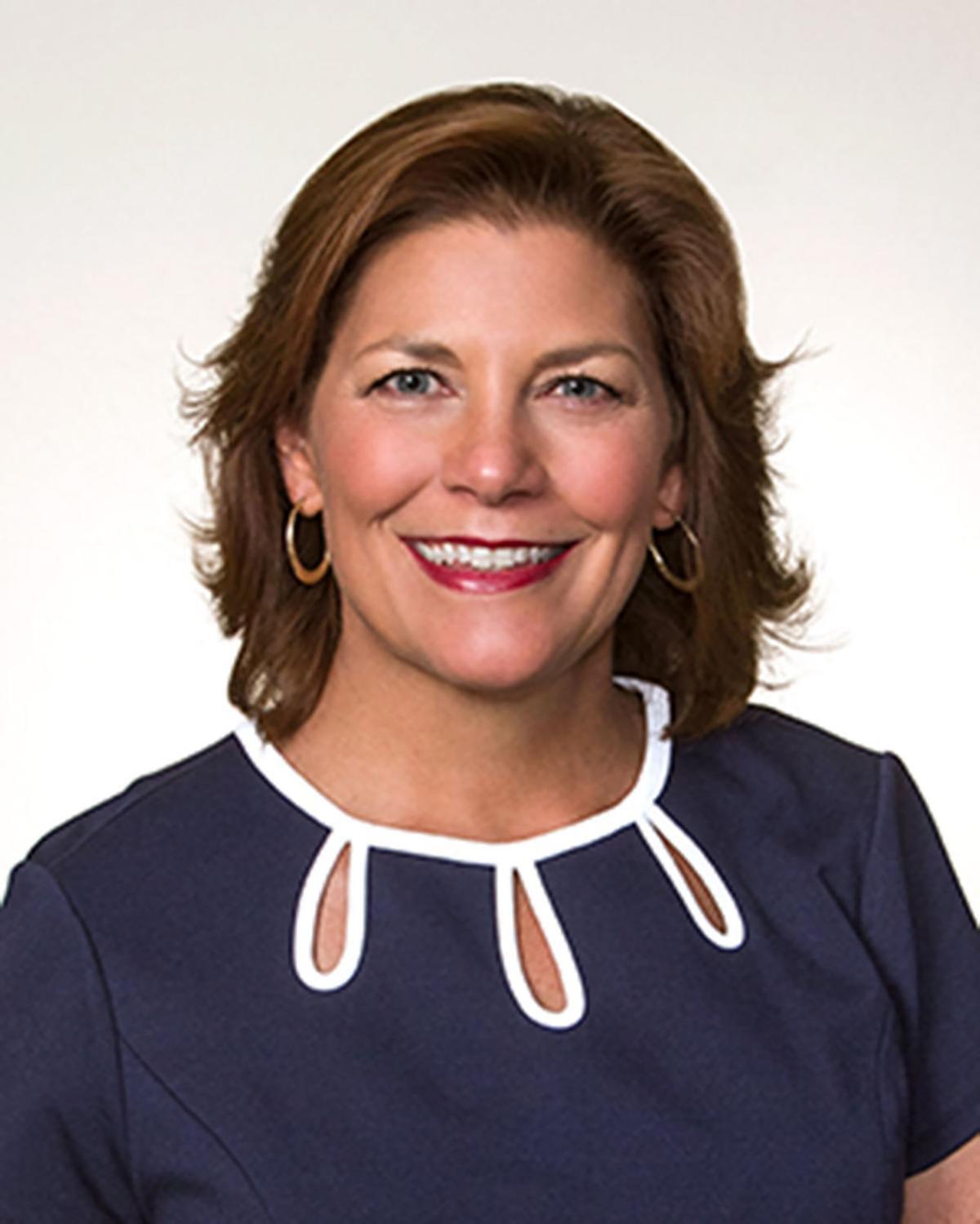 Missouri State Sen. Jamilah Nasheed, D-St. Louis, stands alongside Sen. Tony Luetkemeyer, R- Platte County, during the pledge of allegiance at the state of the session April 8 in the Senate at the Missouri Capitol in Jefferson City. Lawmakers plan to reconvene later this month to tackle a looming budget shortfall.

Despite a statewide stay-at-home order in place through May 3, Missouri lawmakers plan to reconvene later this month to tackle a looming budget shortfall also while trying to prioritize which other pieces of legislation will make it to the finish line.

Legislators have been in and out of the capitol over the last month, with scheduled and precautionary breaks mixed in. Earlier this month, both the House and the Senate gathered for a week to pass a $6 billion emergency supplemental spending measure to deal with the COVID-19 crisis.

When the legislature reconvenes, lawmakers will be faced with solving perhaps an even bigger budget crisis that is being fueled by plummeting state revenues.

St. Joseph State Rep. Brenda Shields said there are a lot of uncertainties with the fiscal year 2021 budget, which begins July 1, but one thing is certain: There will be have to be some steep cuts.

In particular, Shields said there will be an estimated $1 billion shortfall from the current $10 billion general revenue fund.

“We’re going to lose a billion of general revenues,” said Shields, a Republican. “So it’s going to be some pretty significant cuts.”

Shields said a lot of cuts are likely to come from education, which is one of the biggest beneficiaries from the state’s general revenue fund.

State Rep. Sheila Solon, R-St. Joseph, said the budget may end up being a basic work-in-progress mechanism where lawmakers can come back to reassess revenues and federal dollars then re-appropriate funds using supplemental budgets. But either way, she said the main focus is on passing a budget.

“The one thing we’ve got to do is pass a budget by May 8,” she said. “If we’re coming back, that’s the one thing we really must do.”

As the budget process floats through committees and chambers, legislators also will be focused on getting as much legislation as they can to be fully passed so it can be delivered to the governor.

With having missed several weeks of critical legislative time, State Sen. Tony Luetkemeyer, R-Parkville, said there will be a lot of “triaging” of legislation that have advanced to a certain stage.

“The focus is going to be on bills that either already passed the Senate and are over in the House or bills passed in the house that are already in the Senate,” Luetkemeyer said. “Those bills have progressed far enough in the process and it’s more realistic to be able to get them to the governor’s desk.”

Outside of the emergency COVID-19 supplemental package that Gov. Mike Parson signed on April 10, no other legislation has made it to the governor’s desk, which requires a single measure to be approved by both the House and the Senate.

Other legislative priorities Luetkemeyer hinted at are issues that he sees as requiring immediate attention.

“What are the most important things we think we need to get done in a limited amount of time?” he said. “So certainly things related to public safety and taxes will be among the big-ticket items.”

Shields agreed that legislation that already had passed one chamber would be the easiest to fast-track, but she wanted there to also be a focus on bills aimed at combating the coronavirus.

“It’s going to be limited to the things that we already have out there, possibly what we already have on the Senate side and what they possibly have on our side, leadership is going to do a lot of prioritization on what we’re going to work on,” Shields said. “The first things we’re going to work on are things that are COVID related, so we can make sure that we are doing what’s right for the state of Missouri right now.”

Beyond the typical end of session in May, some lawmakers are wondering if a special session may be instituted to handle excess legislation and budgetary concerns.

“Depending on how much we’re able to get done this next couple of weeks, that will say whether or not we come in for a special session,” Luetkemeyer said.

The Missouri Legislature is set to adjourn on its previously scheduled date of May 15.

Last week, Parson said it’s fine for lawmakers to return to work then “as long as they abide by the rules and be careful on the safety issues.”

“I’m glad they’re coming back,” Parson said last week, before making his new May stay-at-home deadline. “I think there’s work to be done at the state Capitol, so I think it’s good.”

Despite pushback from some Democrats, the Republican leaders of the House and Senate issued a statement this past week saying the decision to come back on Monday, April 27, “was not an easy one.”

“However it is absolutely critical for the people of Missouri that we keep the state government funded and services operating without interruption,” the statement said. “We will use the intervening time to monitor the trajectory of Missouri’s coronavirus cases as well as assess the impact of newly issued federal guidance and disaster funds on the state budget.”

But the plan drew immediate pushback from Democrats, who raised concerns about spreading COVID-19 and setting a bad example for the rest of Missouri.

Senate Democratic Minority Leader John Rizzo in a statement said lawmakers would be returning to the Capitol at the same time a University of Washington model predicts the coronavirus will peak in Missouri.

“The Republican proposal to gather everyone together during the worst week of the coronavirus outbreak is the wrong plan at the wrong time for all the wrong reasons,” Rizzo said.

“If we come back prematurely, we’re not only putting ourselves and our fellow legislators at risk, but everyone else that would need to come to the Capitol,” Aldridge said in a statement.

contributed to this report.