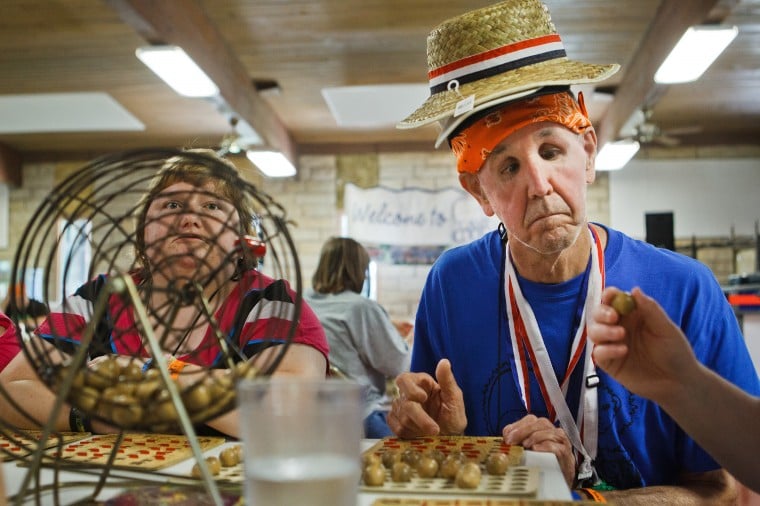 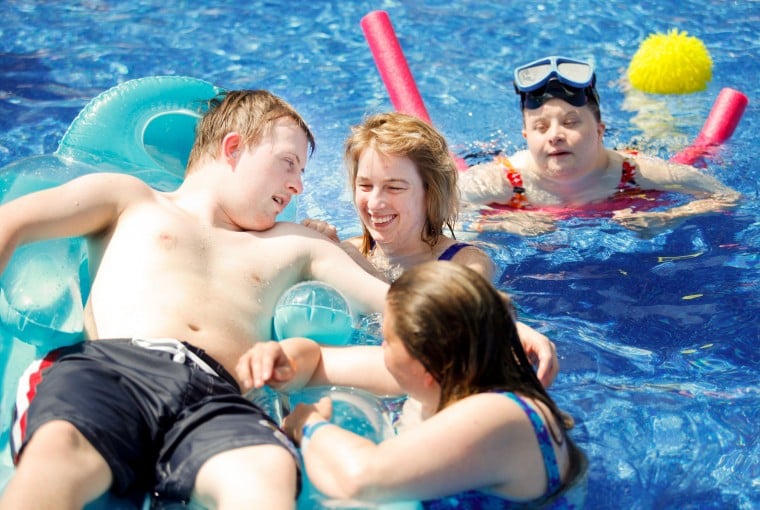 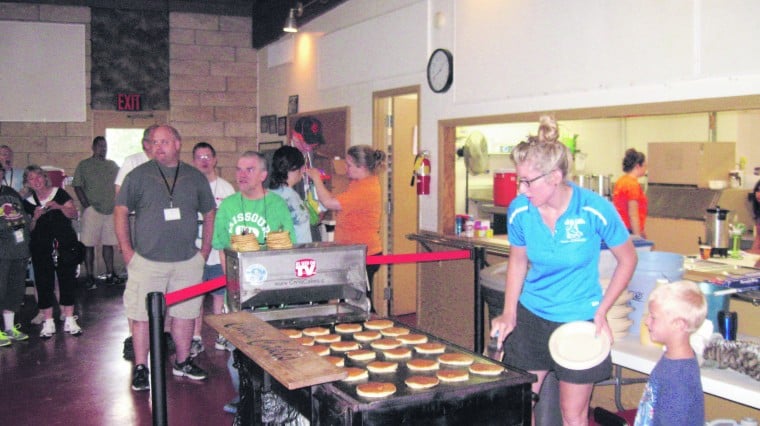 The camp, held for the past four days at Camp Farwesta just outside of Stewartsville, Mo., is designed for adults 21 years and older with developmental disabilities — yet whose disability fits safely into the program.

Staff and volunteers thanked campers for attending this year’s event, to a round of applause that echoed throughout a dining hall. Then it came time for the finale: pancakes almost as though they were Frisbees.

That’s where Rachel Werkowitch of Chris Cakes stepped in with her cooking and other skills to delight the campers. The Kansas City area business specializes in personnel who know how to flip pancakes to hungry diners. Ms. Werkowitch was able to slap a couple dozen globs of batter on the griddle at one time.

Each in turn, campers lined up for their plate of pancakes. On many occasions the plates served as landing pads for the doughy discs, as Ms. Werkowitch deftly lofted the cakes through the air. A few brave campers challenged her to make the distance, to which she complied, even though their catches may have failed. At least one person pulled off the over-the-back routine.

Every success in bringing down a pancake on a plate resulted in a round of wild cheers. The misses netted a chorus of groans.

This year’s edition of Camp Courage Missouri was built around a theme of “On The Farm.” Campers sought volunteers to autograph the 2013 yearbooks, exchanged hugs and posed for a last photo or two.

Plans for 2014 — the 37th version of Camp Courage — already are under way, said co-director Steve Woodward. No dates have been set.

“We’ve already announced next year’s theme,” he said. “We’ve never done that before ... tell the campers.”

During a break of a Saturday night dance, the campers were told the theme will be “Comic Book Superheroes.” Costumes and decorations will be encouraged.

“They got pretty excited about that,” Mr. Woodward said.

During an impromptu Camp Courage board meeting, a decision was made to hold a prom for next year’s program as the final dance.

A total of 48 campers attended this year’s session, hailing from such areas as Stanberry, Mo.; Albany, Mo.; and Johnson County, Kan.

“For years, it was just people from around here,” Mr. Woodward said. “We’ve expanded it.”

One camper said she now enjoys Camp Courage after becoming accustomed to its design and making many friends.

“I’ve been going to camp for about two years,” said Caroline Lobo of Overland Park, Kan. “It’s like a big family to me.”

Camp Courage can boast of a 90 percent return rate among its participants, she added.

The camp is operated by a nonprofit corporation based in Johnson County, Kansas. About 40 volunteers assisted at the camp. For more information, visit www.campcouragemo.org.