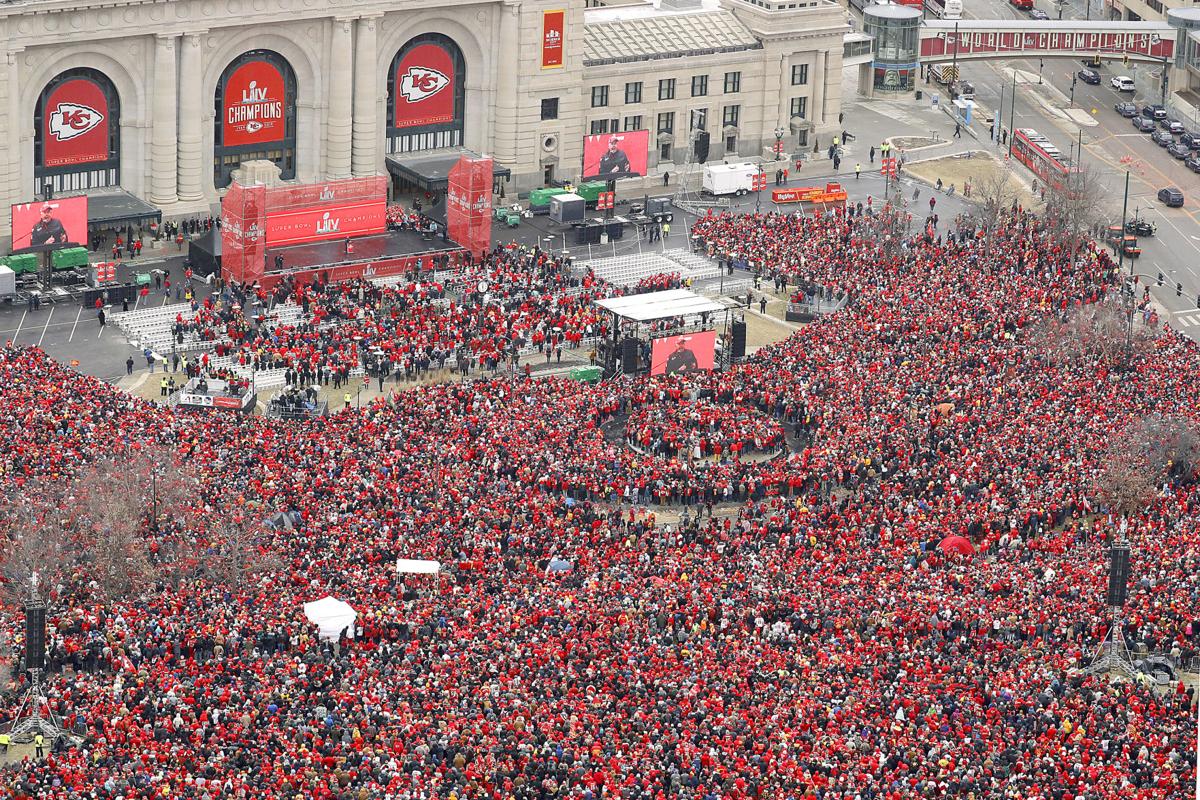 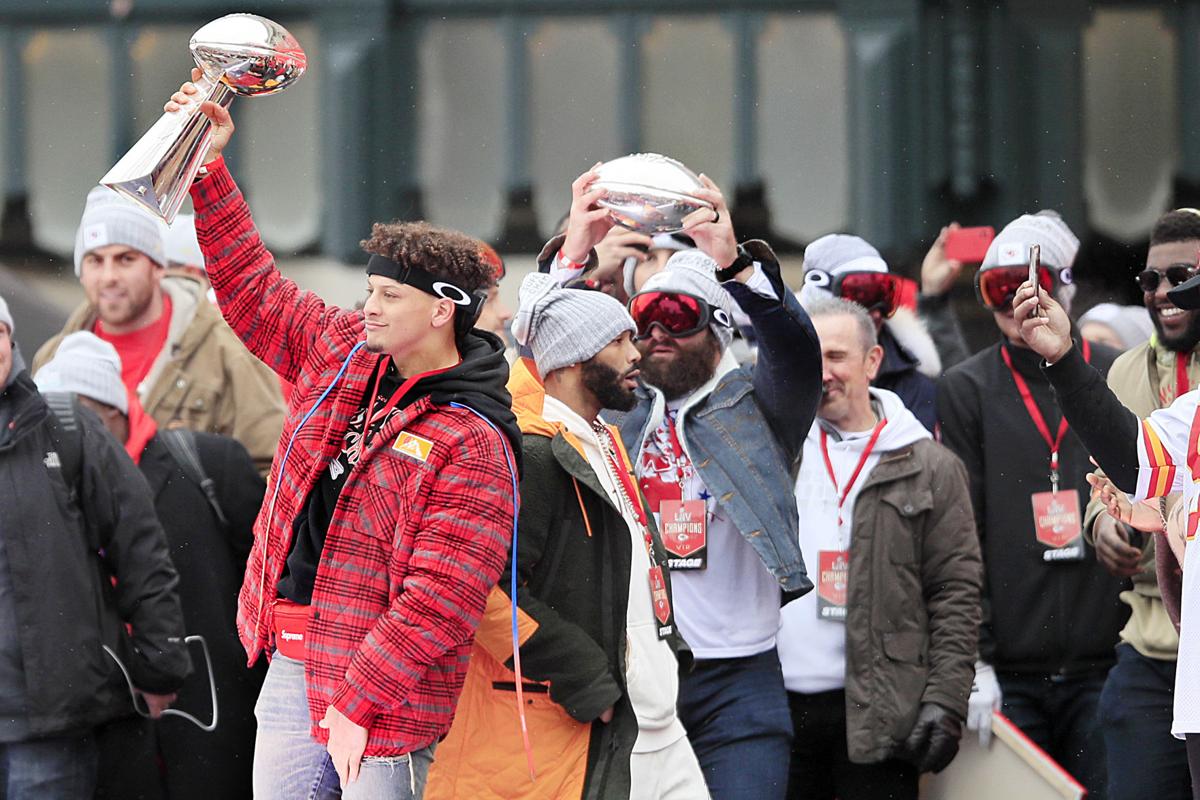 KANSAS CITY, Mo. — Hundreds of thousands of Kansas City Chiefs fans braved Wednesday’s sub-freezing wind chills to celebrate the team’s first Super Bowl victory in 50 years, and if coach Andy Reid is to be believed, they’ll be back for an encore next year.

Fans lined the 2-mile parade route to thank their football heroes for bringing the Lombardi Trophy back to Kansas City and ending a Super Bowl drought that began after the Chiefs won Super Bowl IV in 1970.

Reid thanked the fans for their continued support and for attending the parade.

“Next year, we’re coming right back here,” Reid said in a brief speech. “One more time, baby, one more time.”

Quarterback Patrick Mahomes, the Super Bowl MVP who has captured the fans’ devotion in only his third NFL season, struggled with a strained voice but said the championship fulfilled two goals he set when he became the team’s starter.

First, he said, he wanted to bring the Lamar Hunt trophy for winning the AFC championship back to Kansas City. The late Lamar Hunt and the Hunt family founded the team as the Dallas Texans in 1960 before moving the team to Kansas City in 1963 and changing the name.

“The second most important thing I wanted to do was get the Lombardi Trophy for the greatest coach of all time, Andy Reid,” he said.

Hunt’s son, Clark Hunt, said his father told him before he died in 2006, that the parade and celebration after the 1970 Super Bowl was the best day of his life because of the joy of the fans.

“Thank you for giving my dad and I some the best days of our lives,” he told the fans. “We love you.”

Tyreek Hill, the speedster wide receiver, also promised fans the team would be back for more Super Bowl parades. He told the fans that their support and love fueled the team’s success.

“That’s what makes us ball every day,” Hill said. “Get your tickets, you are going to be in this same spot next year.”

During the parade, several players, including Chris Jones, Tyrann Mathieu and Travis Kelce, got off their double-decker buses to high-five fans and dance down the street. Reid left his bus to show The Lombardi Trophy to fans along the route. Other players sprayed fans with champagne and some drank beer during the parade. At one point, Mahomes was seen pouring a beer from the top of a double-decker bus into the mouth of Kelce, who was in the street.

The event was nearly marred about three hours before the parade began, when an impaired driver broke through a barrier and sped along the parade route. Stop sticks were thrown and patrol vehicles put the car into a forced spin, stopping it near a crowd of fans. The driver and another person were arrested at gunpoint, according to officials and video footage of the incident.

No one was injured. Police said in a news release the driver is under investigation for impairment. No weapons were found in the vehicle and there were no indications of terrorist activity, said police, who were trying to determine the suspect’s motive.

Mayor Quinton Lucas told WDAF-TV he was proud of the quick response of officers, who were cheered by fans who witnessed the incident.

“We have even more heroes to cheer today,” Lucas said.

Some fans slept overnight and others began arriving in downtown Kansas City in the early hours Wednesday to reserve choice viewing spots.

“This is so awesome,” said Shauntel Lyons, 40, of Kansas City, who was a Chiefs cheerleader from 2003 to 2005. “I learned so many great lessons from my time with the team. To see them bring home that trophy after 50 years is so gratifying. I’m just glad to be part of it.”

Fans bundled up for chilly conditions but the forecast for 2 to 3 inches of snow did not materialize, with only light snow falling intermittently.

Wind chills in the teens didn’t deter fans like Dana Reynolds, of Holt, who has been a Chiefs fan for more than 30 years. She and others arrived at 5 a.m. and were taking shelter under a canopy, complete with electric hand warmers, food and everything needed to survive the hours-long wait.

“We want to celebrate the Chiefs season and bring the city together,” she said. “It’s been worth the wait. What Andy Reid and this team have done for the city is amazing.”

The Kansas Legislature took the day off to celebrate and their Missouri counterparts scheduled a light workday. Many area businesses also planned to close or open on a reduced schedule. At Children’s Mercy Kansas City, the emergency room at the main downtown hospital was open, but appointments and some surgeries were rescheduled or moved.

The Chiefs Super Bowl win came five years after the city’s Kansas City Royals baseball team won a World Series. An estimated 800,000 people flocked to that victory parade, shattering expectations in a city with a population of about 470,000 and a metropolitan area of about 2 million. There was no immediate estimate of the crowd size of Wednesday’s rally.