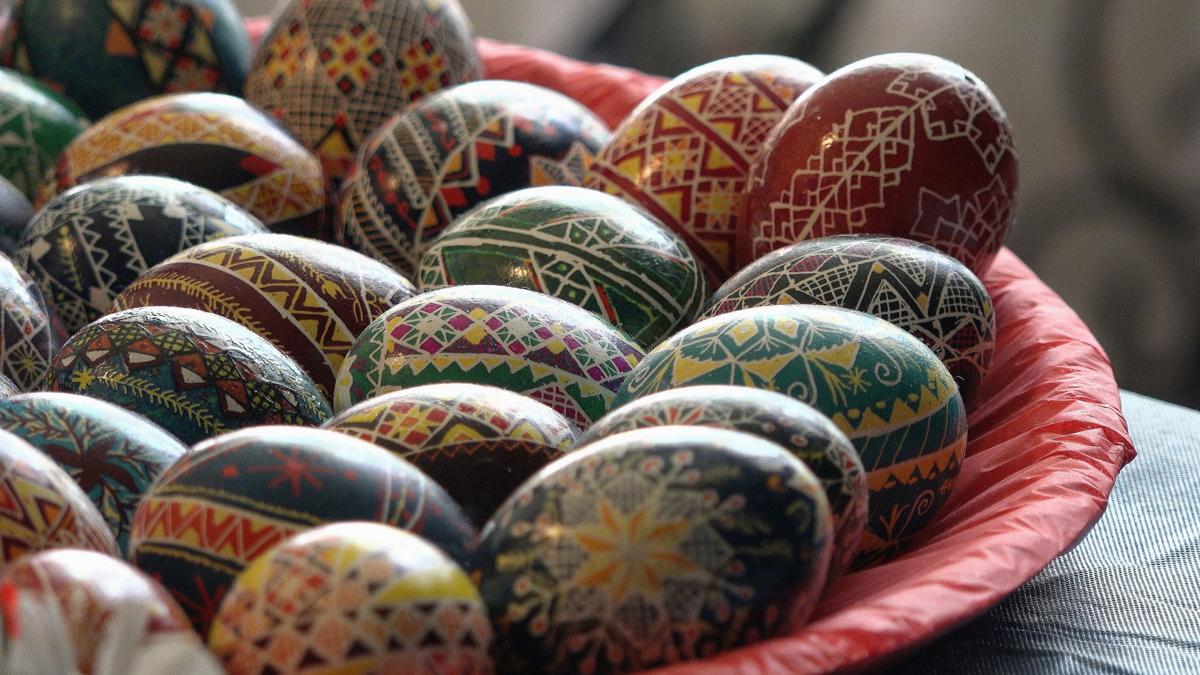 Ukrainian easter eggs, or pysanky, are made by painting intricate designs using wax and then dyeing the shells. 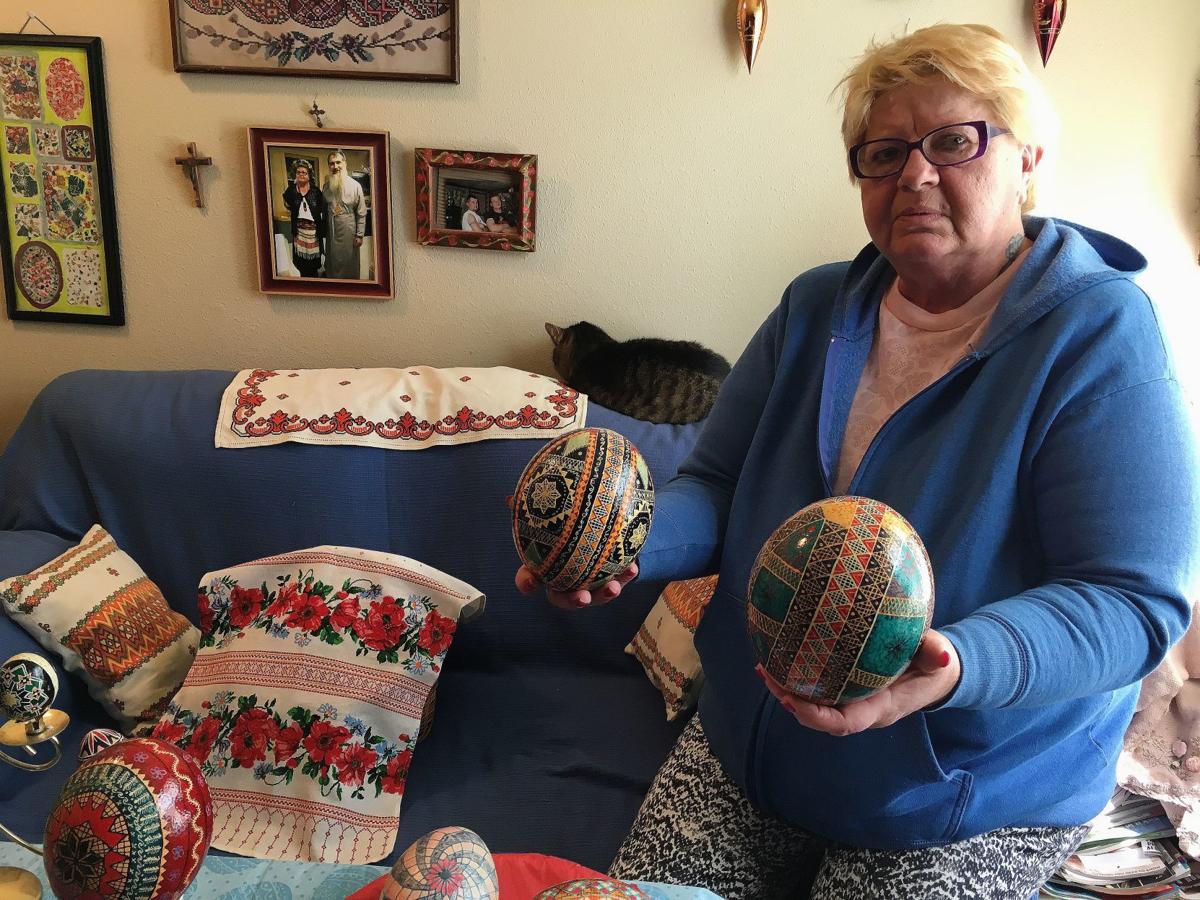 Olga Kalamon Smith, whose parents emigrated from the Ukraine to the United States before she was born, has been painting pysanky since she was 14 years old. 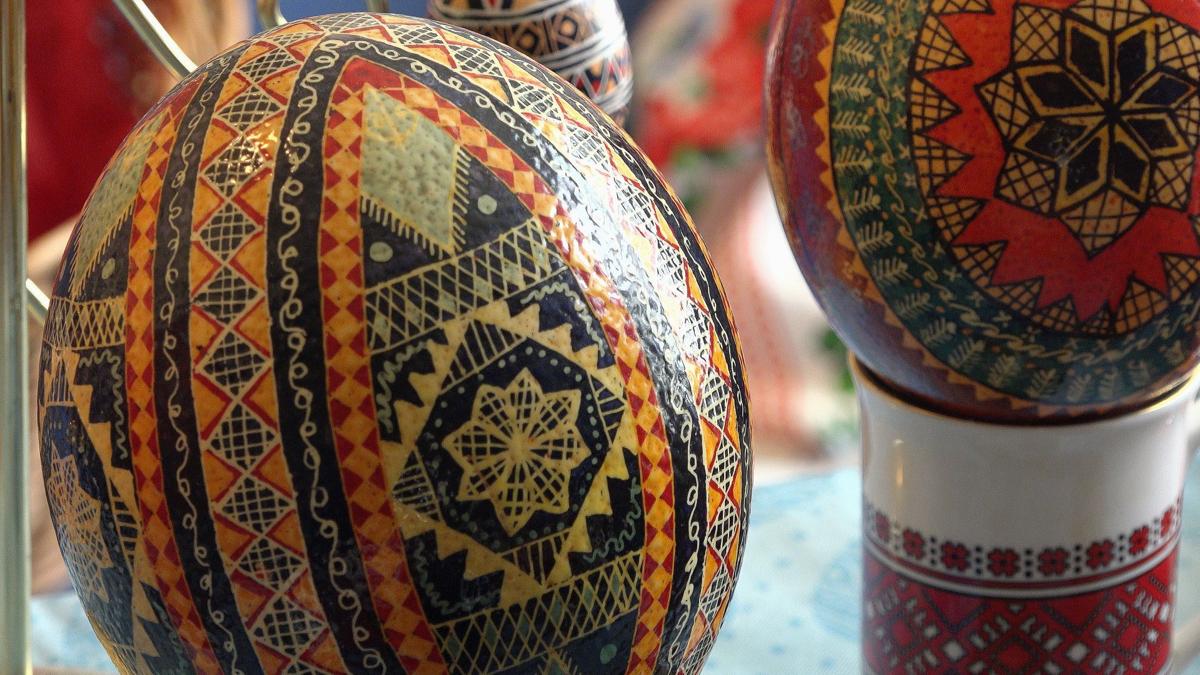 Smith's favorite (and biggest) creations are ostrich eggs she ordered from New Mexico and painted.

Ukrainian easter eggs, or pysanky, are made by painting intricate designs using wax and then dyeing the shells.

Olga Kalamon Smith, whose parents emigrated from the Ukraine to the United States before she was born, has been painting pysanky since she was 14 years old.

Smith's favorite (and biggest) creations are ostrich eggs she ordered from New Mexico and painted.

The daughter of Ukrainian immigrants was born in the United States and grew up speaking both Ukrainian and English. While she and her sister, both born in the 1950s, have since fallen out of practicing Ukrainian regularly, there’s one tradition Smith refuses to let go.

“Around Easter time, we do our eggs,” she says. “And then we set up a basket. We put paska in it, that’s what we call Ukrainian bread, and then we put our eggs and cheese and kielbasa and whatever else you serve that day. Then we take it to church and the (priest) blesses it.”

The traditional Ukrainian eggs Smith makes around Easter are called pysanky. They are hand-painted eggs featuring bright colors and intricate designs. The method of creating pysanky using wax and dye has been used by Slavic cultures for thousands of years and was later adopted as a Christian tradition.

Now, Smith continues to make pysanky the way her mother taught her — even though Smith’s creations are a little more intricate.

“She didn’t do those designs. I kind of upgraded it as I got older,” she says. “Her and dad are gone now, but that’s what I do. I do it in honor of them and the tradition, and I give them to family.”

To make pysanky, Smith draws a design of her choosing on the egg using a wax pen called a kistka. The egg is then dyed in a variety of colors. Once the wax is removed by melting or scratching it off, the final design is revealed and a coat of varnish seals the egg. Smith uses hen eggs most of the time but has also painted bigger eggs.

“I’m pretty proud most of the time. I was surprised when I did ostrich eggs. Oh my goodness, I was so happy,” she says.

Smith has created hundreds of pysanky since she started painting at age 14, and while hand-painted pysanky can fetch between $25 for a hen egg and up to $400 for an ostrich egg online, Smith gives them to friends and family for free.

“They’re in awe, they just think it’s really cool,” Smith says of the reactions she receives when showing off her pysanky.

Smith says she often thinks of her parents when she makes pysanky around Easter and hopes her mother and father would be proud of her for continuing the tradition by teaching her grandchildren.

“Shay, my oldest, when his kids were small we were doing them together,” Smith says. “And Justin, he lives in Kansas City, and he’s got four kids. I went to his house and they were doing it with the kistka and they did it from their own thoughts and they did excellent.”

Smith has been busy making pysanky for this year’s Easter celebration and likes to work without taking a break once she’s started. When asked about her favorite egg she has painted over the years, Smith first points to the ostrich pysanky but then hesitates.

“They’re all my favorite,” she says.

‘It’s up to you to speak first’