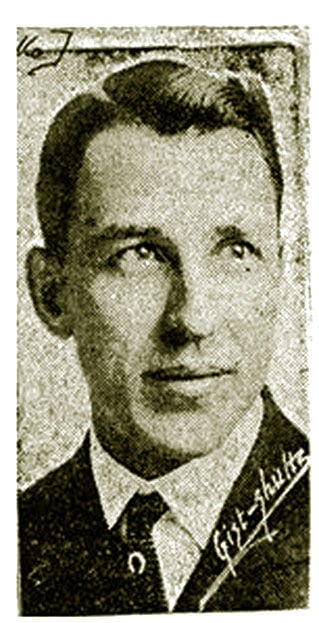 Cub newspaper reporters, if they’re smart, will stay close to their city editors. Those editors can share a wealth of information, from the best way to manage your time, to dealing with news sources, to information about old, memorable stories.

When I was a cub reporter at the News-Press in 1973, my city editor was Harold Slater, a 50-year-plus veteran who was fascinated with the Oscar McDaniel murder case and never tired of talking about it. But why not? It had so many twists and turns that you couldn’t help but be intrigued.

McDaniel was the Buchanan County prosecuting attorney who, in 1916, was charged with killing his wife, Harriet. Rumors abounded that he was having an affair, and that he beat his wife to death the night of July 14 during an argument. He denied the charges. That’s interesting enough, but in addition:

For 16 days after his arrest, he ran the prosecutor’s office from his county jail cell.

While incarcerated, he was allowed to have dinner at a friend’s house one evening, and to have lunch at a saloon another day.

McDaniel was up for re-election while awaiting trial, and, out on bond now, rented the Lyceum Theater for a speech to make his case. He lost the election.

❯ McDaniel was acquitted, and possibly one reason is because the state insisted on only one outcome: death by hanging (Too much to ask of a jury in a case like this, legal observers have said).

He remarried and the new family moved west. Years later, word filtered back that his second wife had been killed in a mountain accident.

McDaniel’s final wish, friends said, was to be buried next to Harriet. In 1936, the News-Press received a tip that a secret burial had been made at Mount Mora Cemetery. Slater, who by then was courthouse reporter, went to the site and found a fresh grave next to Harriet’s. Word was that it belonged to a man named Oscar Mack (which had been one of McDaniel’s aliases years before).

But let’s go back to that crazy idea of running a prosecutor’s office from a jail cell. Mike Insco, who served as Buchanan County prosecutor from 1977 to 1990, said it would be possible, but awkward.

“If you have a well-organized office, you could delegate the work, at least for awhile,” said Insco, who now is in private practice. He pauses and chuckles. “What a story.”

Slater thought the same thing. He was 9 years old in 1916 and said in his book, “Behind the Headlines,” that it was the one thing that got him reading newspapers. And back then, reporters had better access to law enforcement agencies and the articles were more detailed.

I can just envision an impressionable 9-year-old boy at the kitchen table, poring over the latest story in the News-Press. And in this case, a new one came out every day: A metal rod, possibly used in the murder, found in a closet in the McDaniel home … An anonymous letter, written to the sheriff, threatening to blow up the jail if any more privileges were granted to McDaniel … A story revealing that McDaniel had told detectives he knew who killed his wife.

When I was 9, it was the summer of 1960 and little impressionable me was keeping a scrapbook on Major League Baseball. I remember sitting on the floor in the front room, gathering sports sections from the News-Press and the Gazette around me, and cutting out stories: Senator Kennedy (soon to be president) throwing out the first ball at a game … Mickey Mantle knocking another one out of the park … The Pittsburgh Pirates, led by a guy named Bill Mazeroski, continuing a climb to the top in the National League.

Slater went to his grave ever fascinated with the Oscar McDaniel case. I continue to follow baseball in the summer. Some things you pick up from the newspaper and never put down.