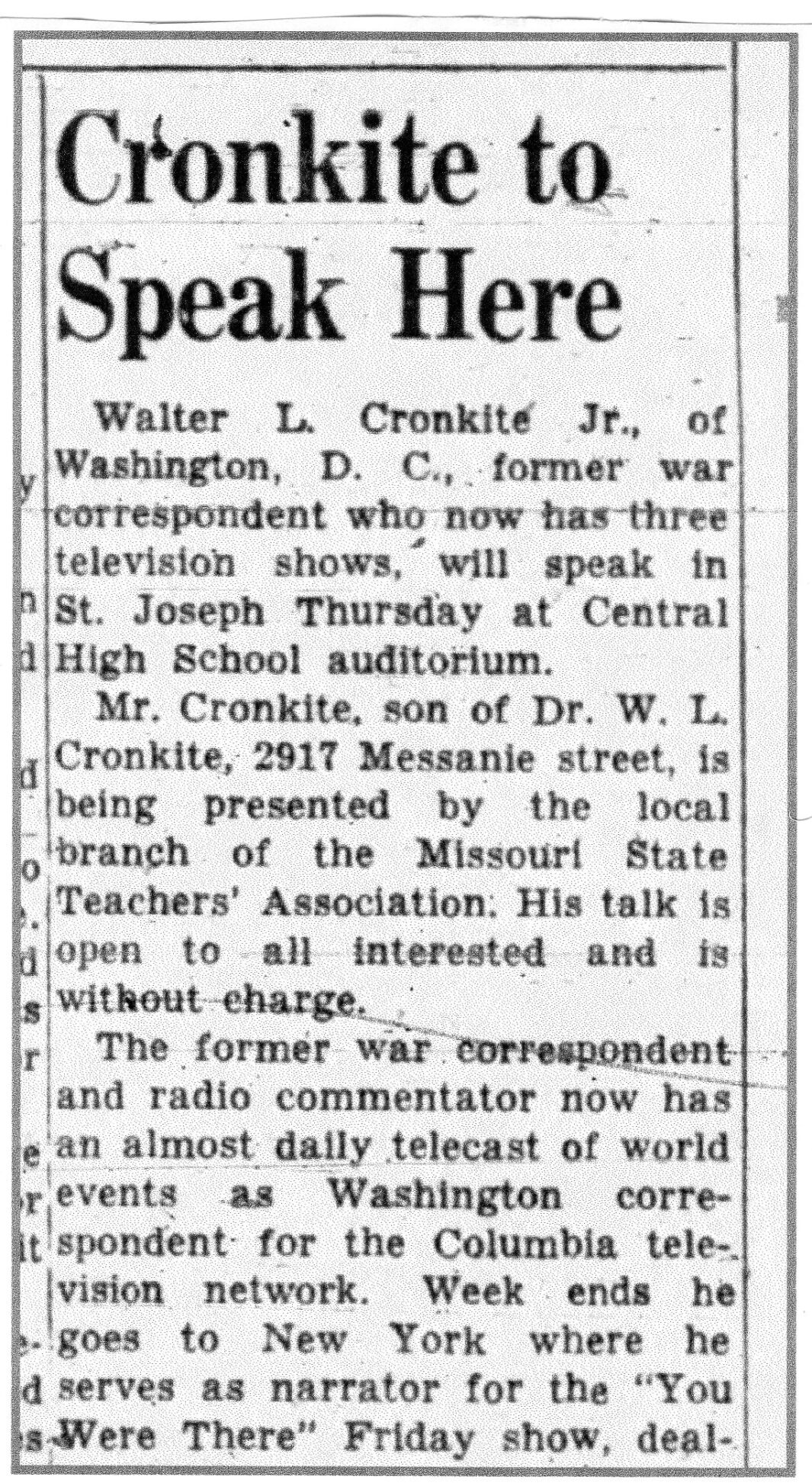 An old friend called the other day, all excited.

“I just watched a movie from the 1940s, ‘It Started with Eve,’ and there were two people in it from St. Joe,” he said. “Dorothea Kent and Irving Bacon.”

I had heard of neither. “It makes you wonder how many other entertainers are out there who were from St. Joe,” he added.

Hmm. Interesting idea for a column. And maybe we could take someone more famous and mention something you didn’t know about them.

So here we go, folks. Let’s see what we can find in the files.

Born here in 1916 to Mr. and Mrs. Tony Schaefer, Dorothea starred in 42 films between 1935 and 1948. One News-Press account said the star of “Million Dollar Legs” is “known for her portrayals of roles that call for a saucy blonde type.”

She returned to St. Joseph in November 1939 to visit her grandmother, Mrs. Emma Schaefer, 723 S. 15th St., and other relatives. “She was en route to Hollywood from New York, where she had been on a motor trip with friends,” the News-Press reported.

Miss Hite, the author of “The Hite Report on Female Sexuality,” was born in St. Joseph in 1942 and attended Hall Elementary School and Central High. Her book, released in 1976 and compiled from questionnaires, sold more than 6 million copies.

In June 1979, she was visiting in St. Joseph and stopped by the News-Press offices to talk to reporter Carol Stout. She told Stout she was working on a new book, this one on male sexuality, and couldn’t reveal any details. “I will say this, that men are all very different,” she added.

Betty Garrett Best known to many of us as Irene Lorenzo, Archie Bunker’s feisty neighbor in “All in the Family,” Betty Garrett was born in St. Joseph in 1919. She won a Golden Globe in 1974 for that TV role, but her great love was theater.

A News-Press story in April 1946 recalled that she had won a scholarship to study dance in New York after high school, and two years later joined Orson Welles’ Mercury Theater. Award-winning performances in musicals such as “Call Me Mister” followed, opening the door to Hollywood.

But although Garrett landed choice roles in movies like “On the Town” (with Gene Kelly and Frank Sinatra), her heart belonged to Broadway. She was interviewed by the News-Press‘ Preston Filbert in November 1989, shortly before beginning another play, “Meet Me in St. Louis.”

“I just figured you shouldn’t turn down challenges,” she told Filbert. “That’s what keeps you going.”

Most people think of Walter Cronkite as the venerable CBS newsman who sat in the evening anchor’s chair for decades. Some might even believe he was born in that chair.

But News-Press and Gazette readers had been introduced to him long before. Then, he was known as Walter Jr. (his father had been a dentist here) and he was a World War II correspondent for United Press International.

His bylined stories filled our pages for years. Some headlines: From May 1945: “German Says Nazis Had Planned to Invade Ireland”; From December 1946: “Soviet Press Asks Patience and Good Will”; From November 1947: “Average Russian Believes Soviet Now Has Atom Bomb.”

Cronkite returned to St. Joseph in April 1953 to speak to students at Central High and visit his parents at their home, 2917 Messanie St. By then he had joined CBS News and was hosting his own program. “Though only 36, Walter Jr. already has had a colorful career,” a Timely Observations piece noted.

Yes. And in a way, he was just getting started.