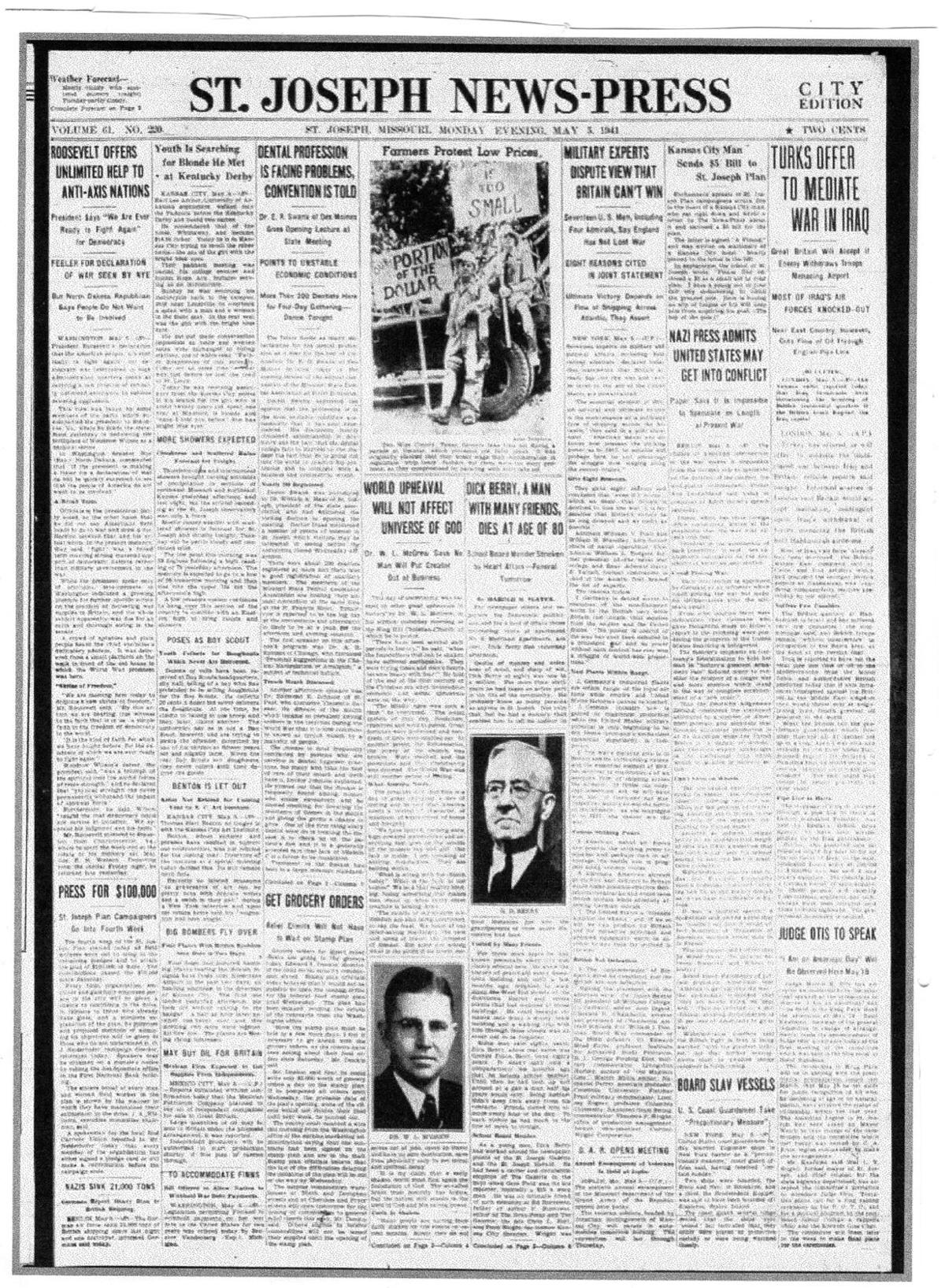 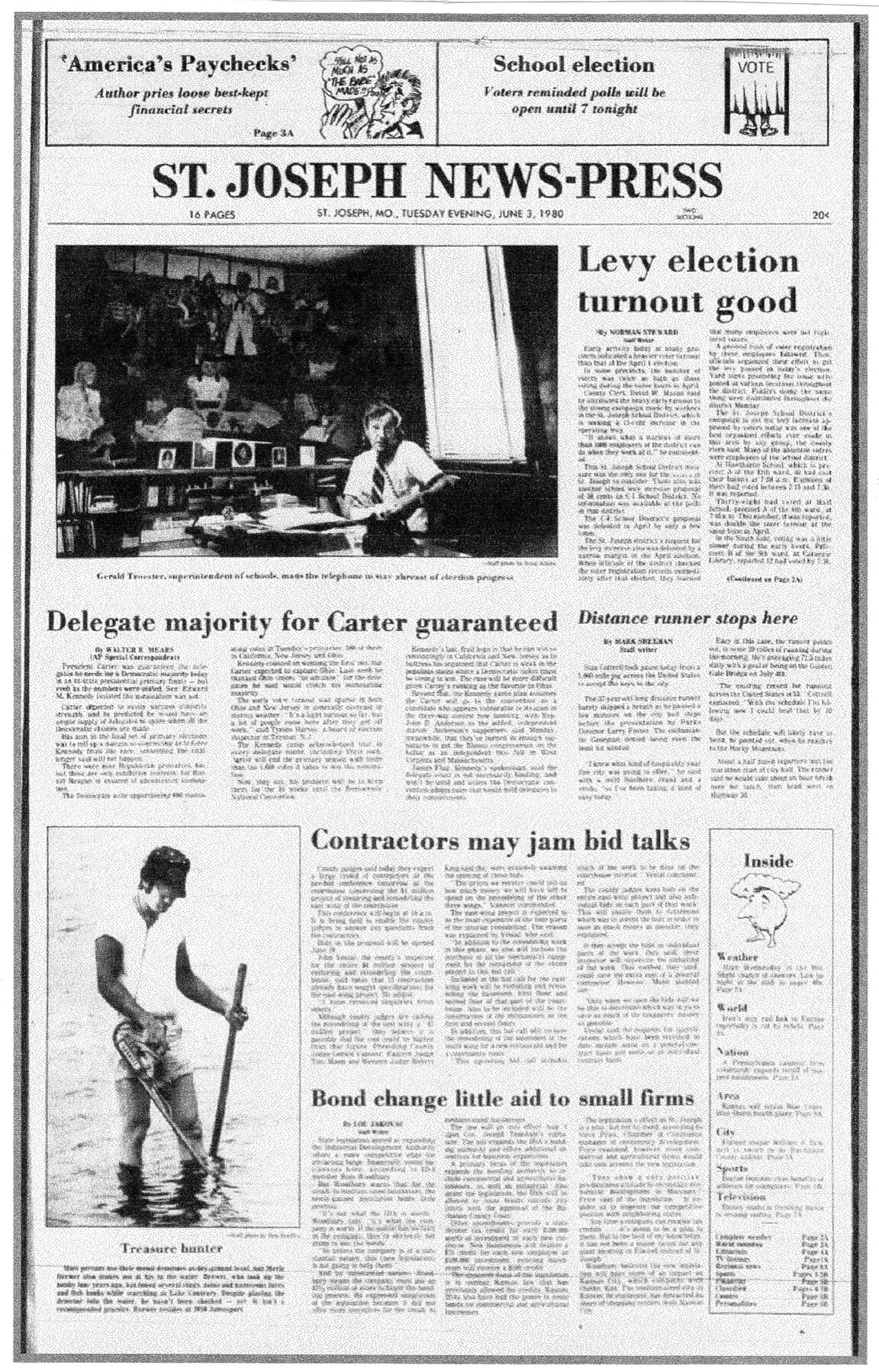 Take a look at the front page of today’s News-Press. How many stories are there? Three? Four? Five?

And I’ll bet there are a couple of large photos, right?

But before then — the vast majority of time the News-Press and the Gazette have been publishing — we had vertical makeup, where most stories were laid out in one column and photos were few (and all of them small). After all, you had to make room for the multitude on stories on the page.

“When I started, we ran anywhere from 10 to 20 stories on Page One,” said Lee Schott, who worked on the wire desk from 1958 until his retirement in 2005. “And back then, most of it was national and world news.”

That makes sense, though. Television was in its early stages, and the only other media was radio, which just covered highlights of the top stories. To get details on a variety of topics, you had to read the local newspaper.

“Back then, the pages were bigger and the columns were wider,” Schott recalled. “We had a system that used linotype machines — what we called hot type — and it was easier to lay out pages in a one-column format.”

That all changed in the 1960s, when the newspapers moved to cold type, or offset printing. Stories came out on sheets of film, which were pasted up on blank pages and photographed. Plates then were made of those images and put on the press.

“This made it easier to lay out multi-column stories, and it also improved the quality of the photos,” Schott said.

At the same time, more and more newspapers were experimenting with new formats, such as large photos and fewer stories per page, a trend that continued through the 1970s.

A big change here took place about 1980, when many older employees retired and younger ones took their place. One of them was Jean Shifrin, who graduated from the University of Missouri in 1979 and worked at the News-Press and Gazette the next two years.

“During my job interview they told me I could do photo stories, and that was important,” she said. With photo stories, the photographer both writes and takes pictures. It’s probably the height of photojournalism.

“I liked the fact that the News-Press was a smaller paper that practiced community journalism. That allows you to do things that you probably couldn’t do on a major newspaper.”

Meanwhile, the News-Press and the Gazette were looking more and more like those major newspapers. Vertical photos that before would have been sized at two columns now became three. The old three-column photo became four. That reduced the Page One story count to five or six, a far cry from Schott’s early days.

Local news and sports got their own sections. So did the society pages, which expanded their offerings and became “Lifestyles” or something similar. With larger photos in mind, everything was laid out in a horizontal format.

Stylistically, it was a huge improvement. And yet, there’s something quaint, even charming, about the old days. I recently was going over the front page of a paper from 1941, and in addition to the heavy stories about the economy and Nazi Germany, there was this: “Youth Is Searching for Blonde He Met at Kentucky Derby.”

Human nature demands that you read a story like that. And why do we read newspapers anyway?