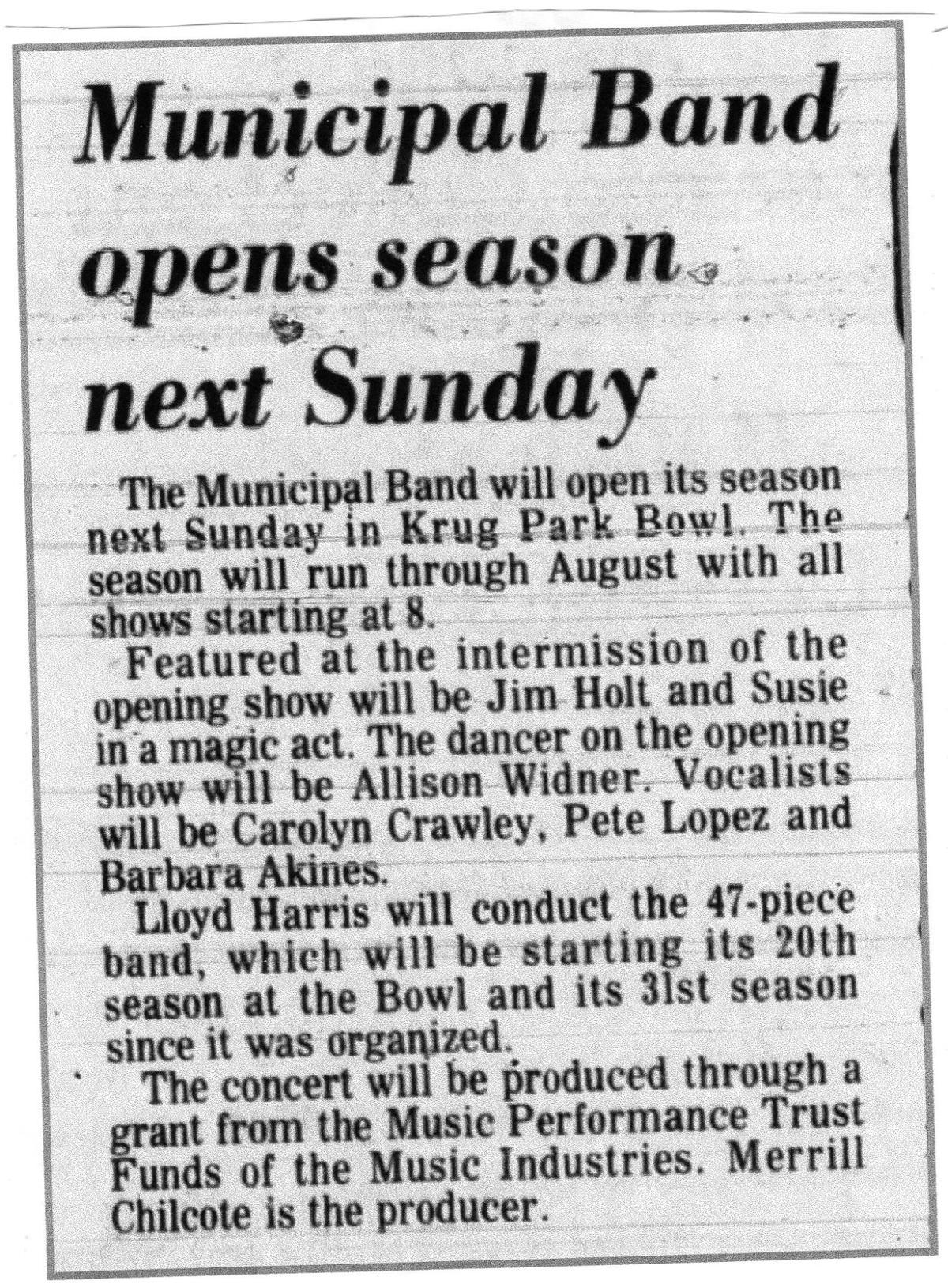 City officials are studying plans to renovate the Krug Park Bowl, making it more suitable for concerts. This column is not designed to pass judgment on any such plans, but to recall past events, as documented by this newspaper.

And if today’s topic is concerts at the bowl, there’s a world of information out there. That’s because for more than 50 years — from 1928 to 1979 — the bowl was used regularly for band concerts in the summer.

Krug Park opened in September 1888 on land purchased by the Union Railway Co., which operated the trolley service in town. The bowl wasn’t completed until 1928, but that doesn’t mean there wasn’t music. In fact, it took only a year for a July 4 concert, complete with fireworks, to come along.

“The music, provided by Pryor’s Full Military Band, was exquisite,” the Gazette reported the next day. “Arthur Pryor’s trombone solos were exceptionally fine.”

Wonder why the trolley company was so interested in the land? Here’s a clue: “Early in the evening, great crowds commenced to flock to the popular resort, and the Union line cars were crowded to overflowing, both going and returning.”

From the beginning, then, public transportation was the key to getting large numbers of people to the park. Those overflowing cars were filled with paying customers, which certainly helped Union’s bottom line.

Early concerts, held at different places in the park, continued through the first two decades of the century. Meanwhile, the wheels were turning to shape the bowl into a first-class venue.

The grand opening, in August 1928, featured a performance of “The Passion Play,” and officials were quick to note that the outdoor theater would seat 13,000. That’s in large part because a grandstand was being built at the top of the hill that could handle more than 4,000 spectators.

“There is said to be nothing of the kind in the country, other than the famous Hollywood Bowl,” the News-Press reported.

The shows caught on fast; a Gazette clip from July 1929 reported that 10,000 people attended a concert by Maupin’s Municipal Band and the Community Singers. Those large crowds continued through the 1930s, prompting Police Commissioner Henry Rix to urge citizens to leave their cars at home and take buses to the shows. This idea was reinforced a few years later when officials instituted a trolley service for a performance of the popular “The Merry Widow.”

Over the years, the bowl has been used for everything from Woodstock-style music festivals to religious services to Lafayette High School graduations. But most people probably remember it as the home for the St. Joseph Municipal Band’s summer concerts.

Those shows ran for 24 years — from 1955 to 1979 — with Lloyd Harris as conductor and Merrill Chilcote as producer. There was always good variety, as dancers, magicians and the occasional circus act joined in the fun. Some singers were so popular that they performed regularly: Sharmyn Thompson, Pete Lopez and Etta Green among them.

The ending came when the concerts’ benefactors, the Music Foundation’s Trust Fund and the City Council, both pulled back their allocations. Chilcote, longtime News-Press editor, bemoaned the move in a “Timely Observations” piece:

“We offer our best wishes to those courageous people who have gone to the city with hat in hand,” he wrote. “They’ll need them.”

Still, public funds or no, the Krug Park Bowl has provided some wonderful entertainment over the years. Many of us hope it can happen again.

If only parking wasn’t such a problem and we weren’t such a car-truck culture. Or, perhaps we could return to the days when it was a normal practice to take buses and shuttles everywhere.

Ah, but that was a different time.