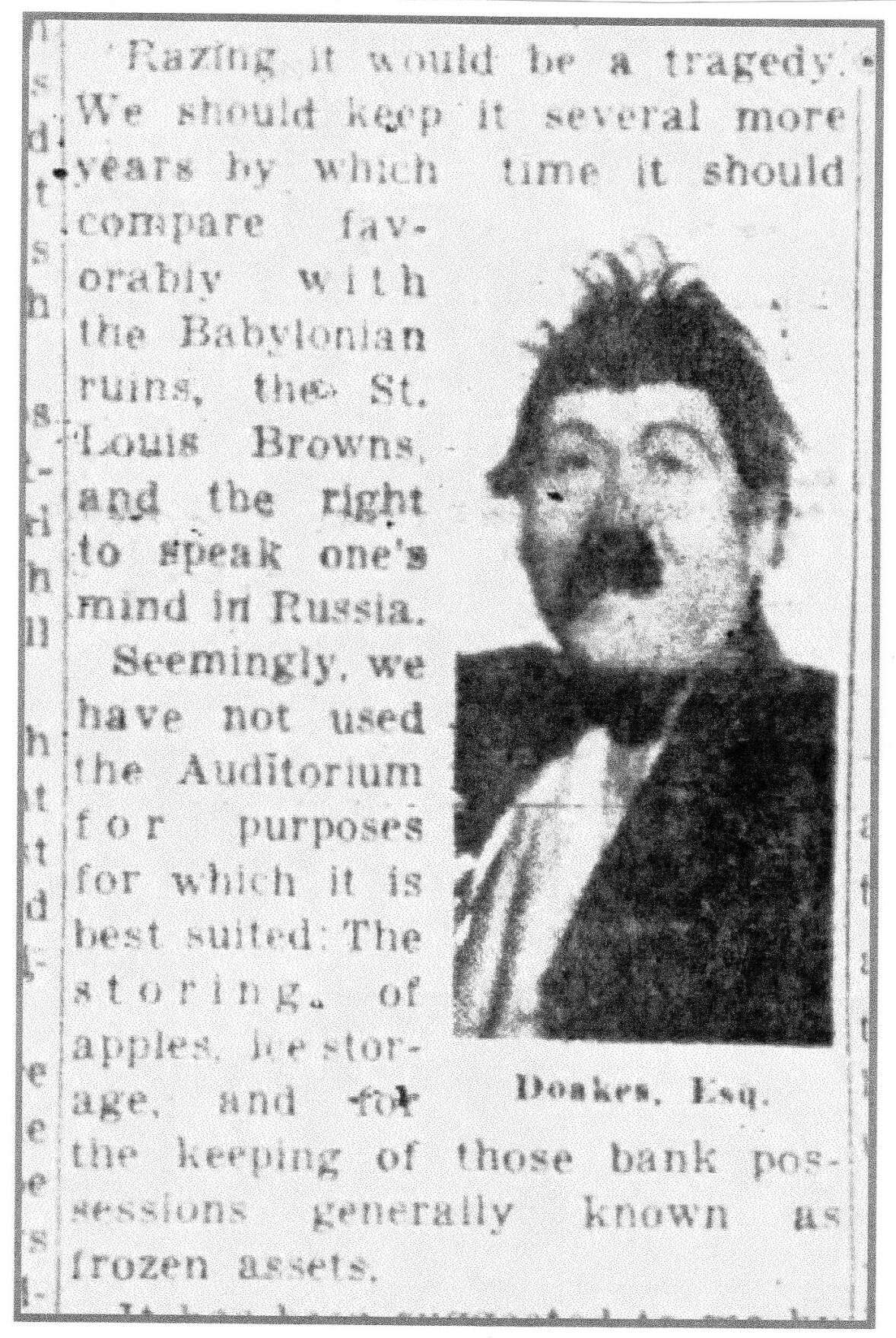 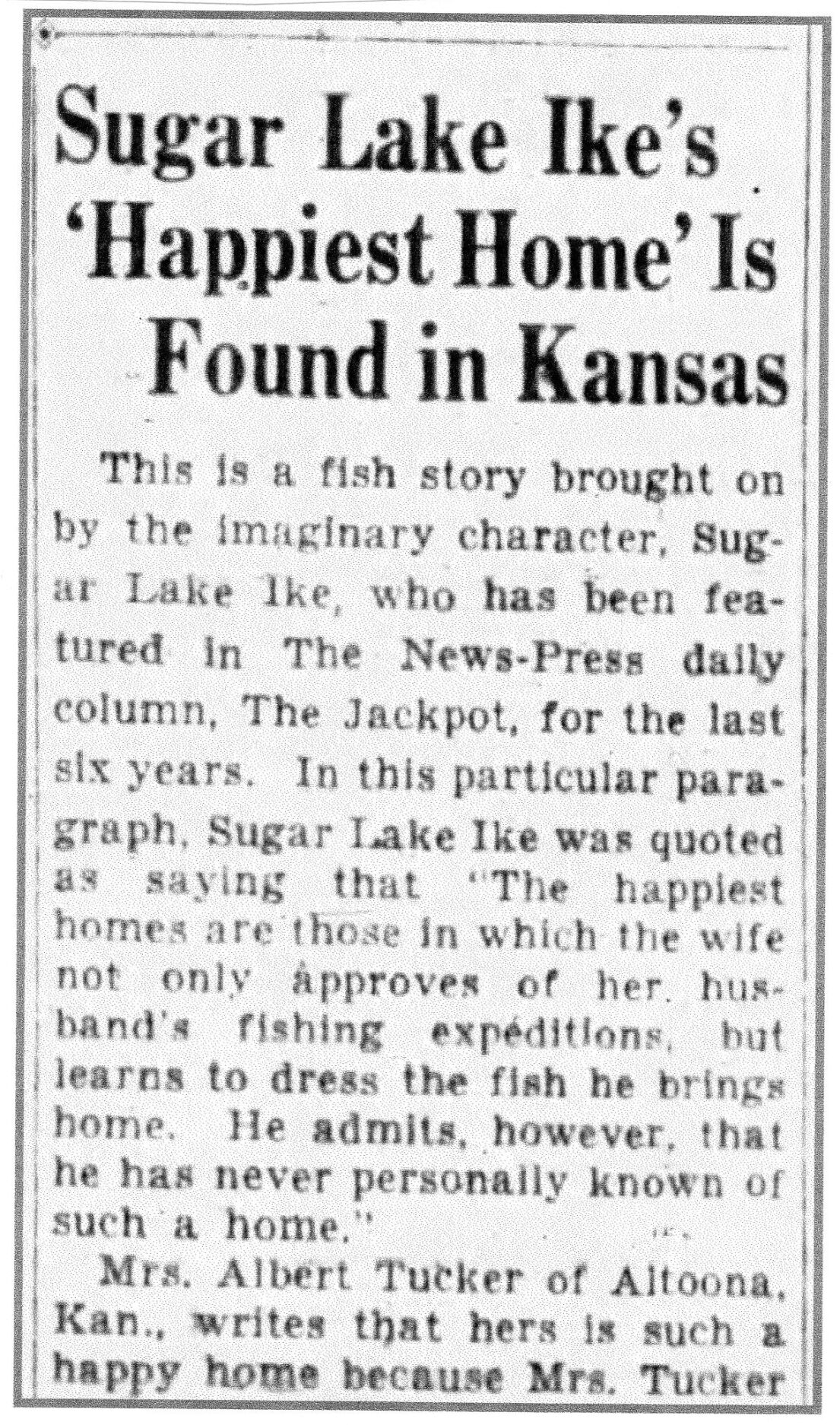 Do you remember Sugar Lake Ike? Edmond Street Ed? The fellow at the next desk?

How about J.J. Doakes Esq.?

If so, you’re old enough to recall the whimsical humor of Merrill Chilcote and Harold Slater, two News-Press editors who each served the paper for more than 50 years.

Day after day, year after year, Chilcote wrote “The Jackpot” for the editorial page, a column of one-paragraph tidbits that owed more to small country newspapers than a medium-sized daily. Full of light, corny humor, it had the power to make you smile when so much of the news surrounding it was heavy and depressing.

Doakes, written by Slater, was in story form and ran in different parts of the paper, many times on Page One. It carried an old picture of a circus clown as the supposed writer, which told you right away this was not something to be taken seriously. Or was it? Read between the lines, and you’ll see a lot of universal situations that make sense.

Chilcote’s and Slater’s characters were amazingly consistent through the years. Here’s a sample:

From 1952: “The fellow at the next desk is happy his children are now grown. For years it was an awful task for him to think up clever things for them to say for the benefit of visitors.”

From 1972: “The only thing worse than Monday morning, says the fellow at the next desk, is Tuesday morning when Monday is a holiday.”

Meanwhile, Edmond Street Ed “was referring to himself as the mastermind of his family. Well, he’s the master all right, but he has to mind his wife” (1948). And Sugar Lake Ike “notes that postal service isn’t as good as it was 30 years ago. But Ike recalls that, even then, people were complaining about it (1983).

“The Jackpot” also contained some poetry. Titled “His Own Fault”: “Hard luck he brings/As I recall/He starts big things/And then he’ll stall.”

You got the distinct impression that Chilcote had encountered some of these people or scenarios in his life and, in a sense, Sugar Lake Ike and his cohorts were alter-egos. Similarly, J.J. Doakes Esq. was designed as satire, but there were a lot of truths here.

For instance, in May 1980, Doakes came out with a column in which he offered his services as a college commencement speaker, especially promoting his “Happiness Speech for Graduates.”

“It offers high hopes of such glorious things in the future,” he said, “as mandatory free lunches at all taverns, free pool tables in all post offices, free laundromat service at all public libraries and an absolute ban on folk dancing and lengthy sermons.”

In real life, wouldn’t Slater have liked a ban on lengthy sermons? Wouldn’t we all?

Twenty years before, Doakes wrote that he had tried to convince Mayor Arthur Meers to hire him as his executive aide: “If a long-winded committee was in your office, I could drop in and say, ‘Mr. Mayor, it’s time for you to take your smallpox shot. You know, folks, the mayor discovered yesterday he had kissed three babies with smallpox.’

Would The Jackpot and J.J. Doakes Esq. work in the News-Press today? Possibly. But remember that much of this was published in the days before television (to say nothing of computers), so there were few other sources of information available. Yes, you had radio, but folks relied more on newspapers to give them the heavy news – and the lighter stuff, too.

The lighter stuff? Even today, we could use more of that.