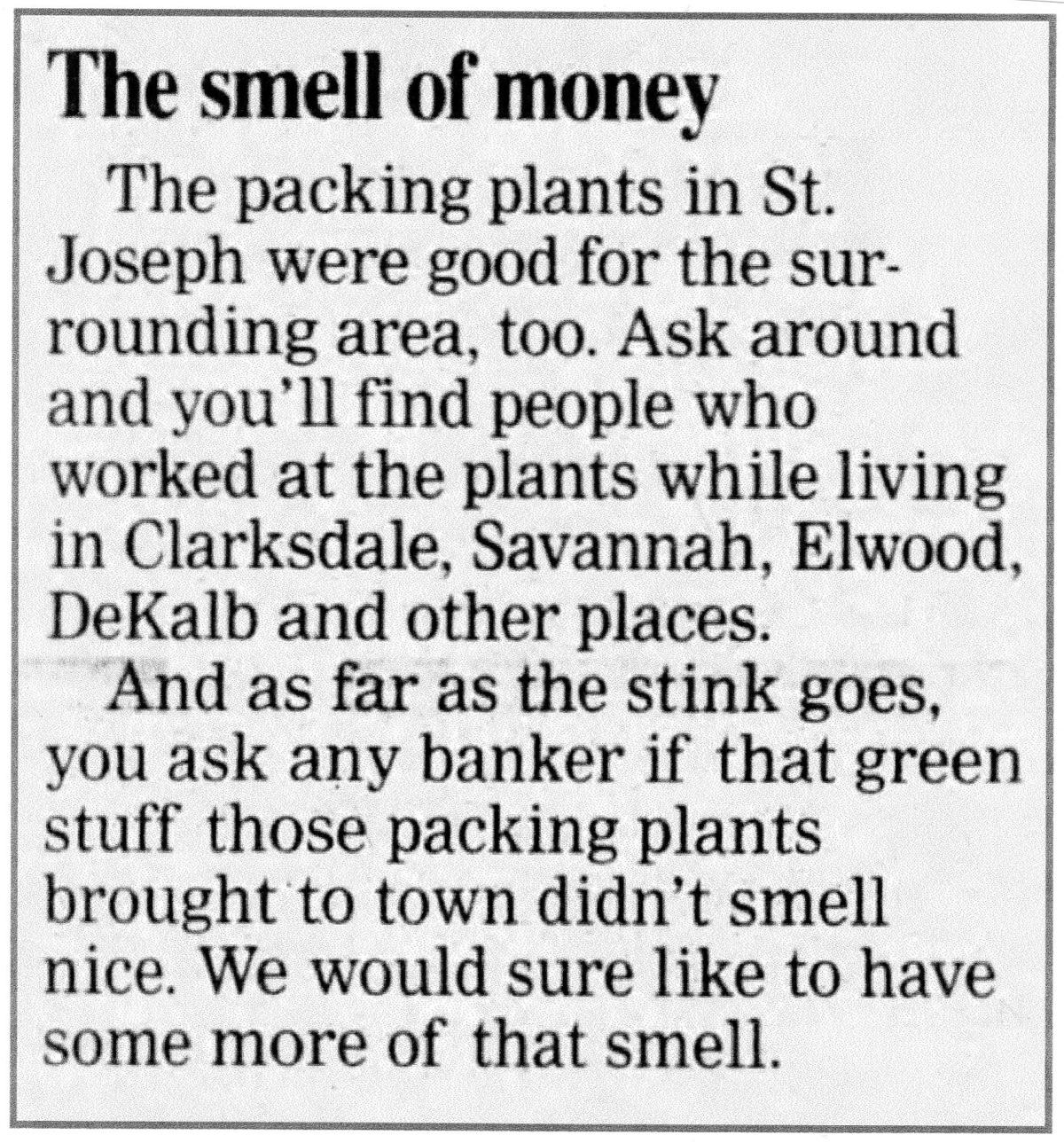 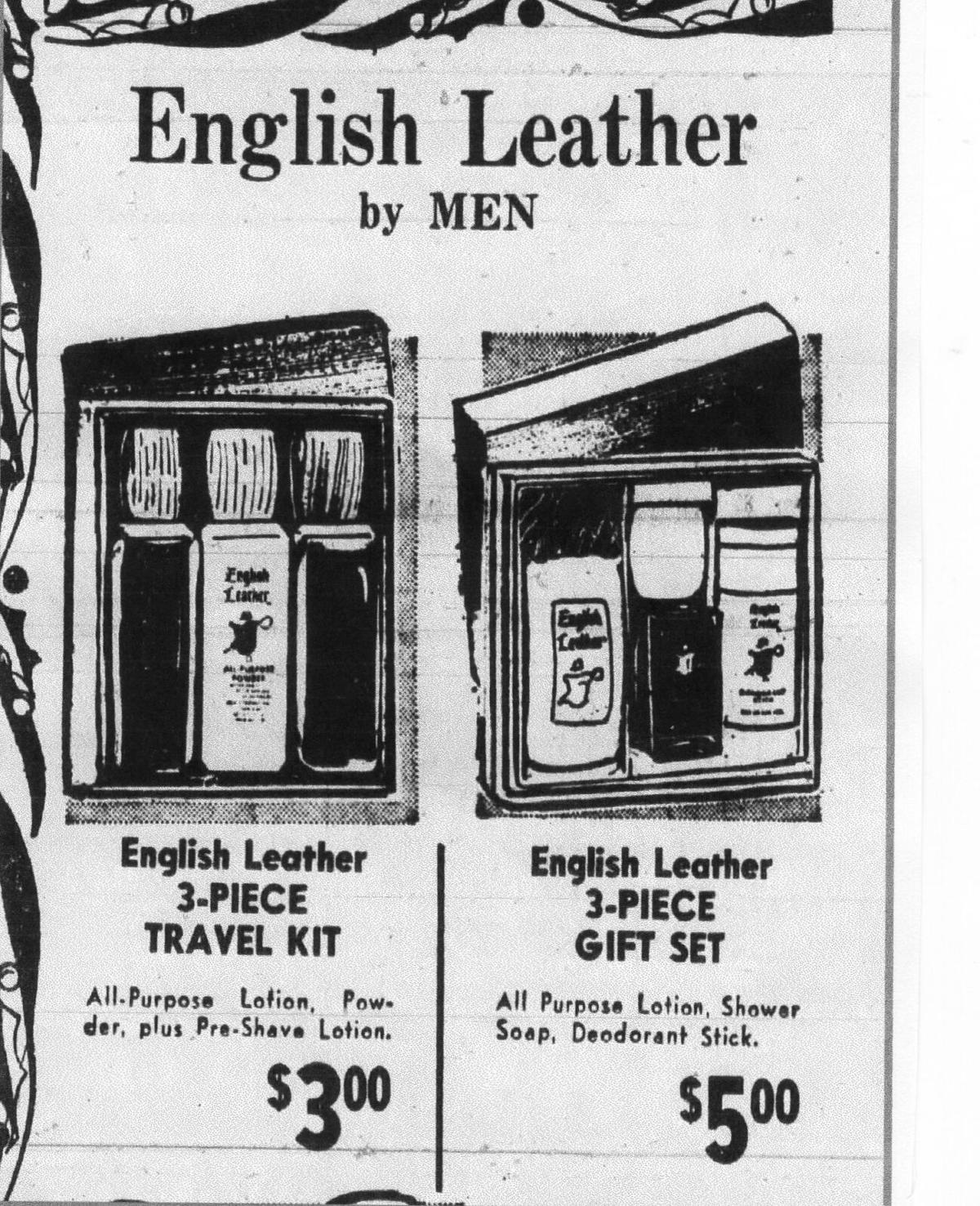 Our senses are crucial in bringing back memories. More than once, I’ve looked at 1940s and 1950s-era photos to get a sense of Downtown’s heyday, heard a train whistle and remembered visiting friends 50 years ago in the South Park area, or bit into a hot dog and recalled those great franks we got years ago from Swift’s and Armour’s.

For Bill Kent, it’s all about the nose.

“When I visit St. Joe these days, it’s the smells I remember,” said Kent, a 1967 graduate of Lafayette High who now lives in Sabetha, Kansas. “The earthy smell of the old Speas Vinegar Works … the enticing, yeasty smell of the Goetz Brewery … the smell emanating from Quaker Oats that always reminded me of Cheerios.”

All fine and good, you say. But isn’t this column supposed to be about old clips from the newspaper? Bet the paper never tackled the “fragrance” topic, especially when it came to the St. Joseph Stockyards.

Over the years, many News-Press and Gazette stories have made reference to aromas coming from various spots around town, especially the stockyards, where it’s been a bone of contention. One side felt the smell was offensive; the other side, realizing that the packinghouses were paying a lot of people’s bills, said, no, that’s the smell of money.

The smell of money. It’s a term that’s been repeated over and over on these pages. Retired reporter Ken Newton referred to it in a 2002 column. So did my late co-worker, Fred Slater, in 1992.

Then there were the “It’s Your Call” battles. “I am sick and tired of people saying the meatpacking plant smells like money,” a caller said in 2003. “It’s disgusting.” Which drew a retort from another caller: “If you don’t like it, don’t come down here. These factories support people like me.”

Let’s face it: The industrial process sometimes produces um, interesting odors, shall we say. In a 2009 column, business editor Susan Mires described the variety: “Walnut Products smells like a forest on an autumn day … Triumph Foods gives a whiff of singed hair … Prime Tanning has a distinctive chemical smell … You can catch an aroma of grain from Ag Processing.”

Then there are the smells that we all find pleasant. Another “It’s Your Call” item: “The wonderful aroma coming from the old Federal Bakery downtown.”

Contributors to “Young at Heart” had some remembrances over the years, too:

Marjorie Helmer: “Freshly baked bread from the Wonder Bakery at 11th and Penn, and the old Cripes Bakery (later Rainbo) at 23rd and Frederick.”

Jeannetta Danford: “Fragrant, creamy gardenias for sale on the corner where Katz Drug Store was located.”

Bernadine Smith: “The smell of coffee in the old cafeteria at Swift & Co.”

As for me, I recall an incident that takes me back to St. Patrick’s gym, at a 1960s teen dance. A bunch of us guys were standing around and one blurted out, “Wow, who’s wearing the Leather?” Yes, the smell of English Leather, a favorite cologne for many of us, was that strong.

And when you danced with the girls, you got a whiff of Estee Lauder, or Tabu or Ambush.

Ah, those wonderful teenage years. But were they always that great? I’m reminded of the times when my folks wouldn’t let me borrow the car … or I brought home a lousy report card … or I couldn’t get a date with a girl I liked.