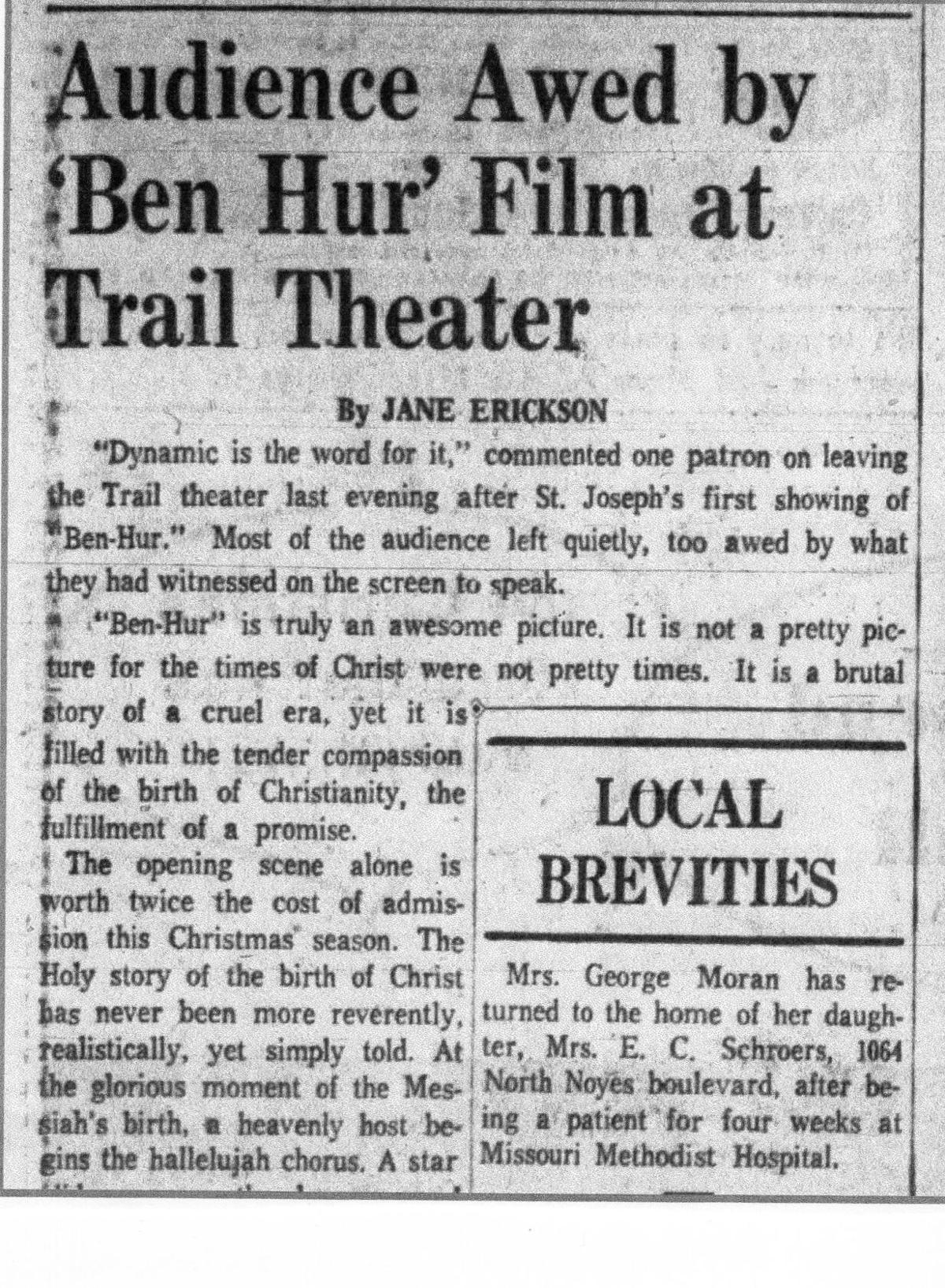 What places in St. Joseph hold the best memories for you? A lot of folks would put the old Trail Theater on that list.

And it’s about to get a new life. News-Press NOW reported recently that the Montee family has bought the theater and will turn it into a multi-use facility with a focus on movies and live performances.

The Trail opened on May 4, 1951, with “Father’s Little Dividend,” starring Spencer Tracy and Elizabeth Taylor, as the main feature. Mayor Stanley Dale gave a speech, and a reception followed at the Hotel Robidoux.

“We welcome this newcomer to the entertainment field,” the News-Press said in an editorial at the time. “It is a pronounced asset to our downtown district.”

The Trail held the honor of being the groovy new theater in town all through the 1950s and until 1965 when Fox East Hills opened. A whole generation of us went to our first movies during this period.

Sure, we liked the Electric and the Missouri because we could sit on the balcony, and neighborhood theaters like the Regal, Plaza and Rialto offered convenience. But there was just something neat about that pink-and-teal Art Deco look at the Trail.

Besides, it got some blockbuster movies. “Audience Awed by ‘Ben Hur’ Film at Trail Theater,” proclaimed the News-Press headline on Dec. 23, 1960. “You’ll shudder in horror at a bloody sea battle and during the chariot race,” reporter Jane Erickson wrote. “St. Joseph is privileged to have this fine motion picture at the Trail Theater.”

One of my starkest memories of the Trail goes back to December of 1970. Some buddies and I wanted to see “Catch-22” on a Saturday night, and we parked in the lot at Manning’s Grocery and approached the theater from the north.

There was a line at the box office, so we kept walking south on Ninth Street to find the end … and walked and walked … around the corner and up Felix Street, finally finding our spot in front of the Downtown Library.

“That happened a lot back then,” said Mike Heye, who managed the theater for a number of years. “We normally had long lines for the first show on Friday nights and for both shows on Saturday.

But changes were on the horizon. Video players came along in the late 1970s, allowing people to watch films in the comfort of their homes. Better quality was offered with DVDs a few years later.

The changes hurt the theater industry, and in 1986 the News-Press reported the Trail was becoming a “dollar house,” with $1 admission. But it carried on until May of 2006 when a sign in the box office announced the theater was closing temporarily. Shortly after that, it closed for good.

Kim Jennings and Winston Bennett later bought the property and promised a renovation that never came about. One feels the Montees will be more successful.

Regardless of the theater’s future, its past holds wonderful memories for a lot of us. In 2001, News-Press columnist Alonzo Weston and his wife were among those invited to a special screening of “Gone With the Wind.” In his column, he mentioned films he had seen there: “Lady and the Tramp,” “To Sir With Love” and “A Clockwork Orange,” among others.

“You were guaranteed to get lost in a movie at the Trail Theater,” he wrote. “The big screen and the big speakers put you right inside the action.”

And whether you’re talking about a thrilling film or a knockout band, that’s a good place to be.

No increases for sewer rates

When the Heckmans ruled the courts