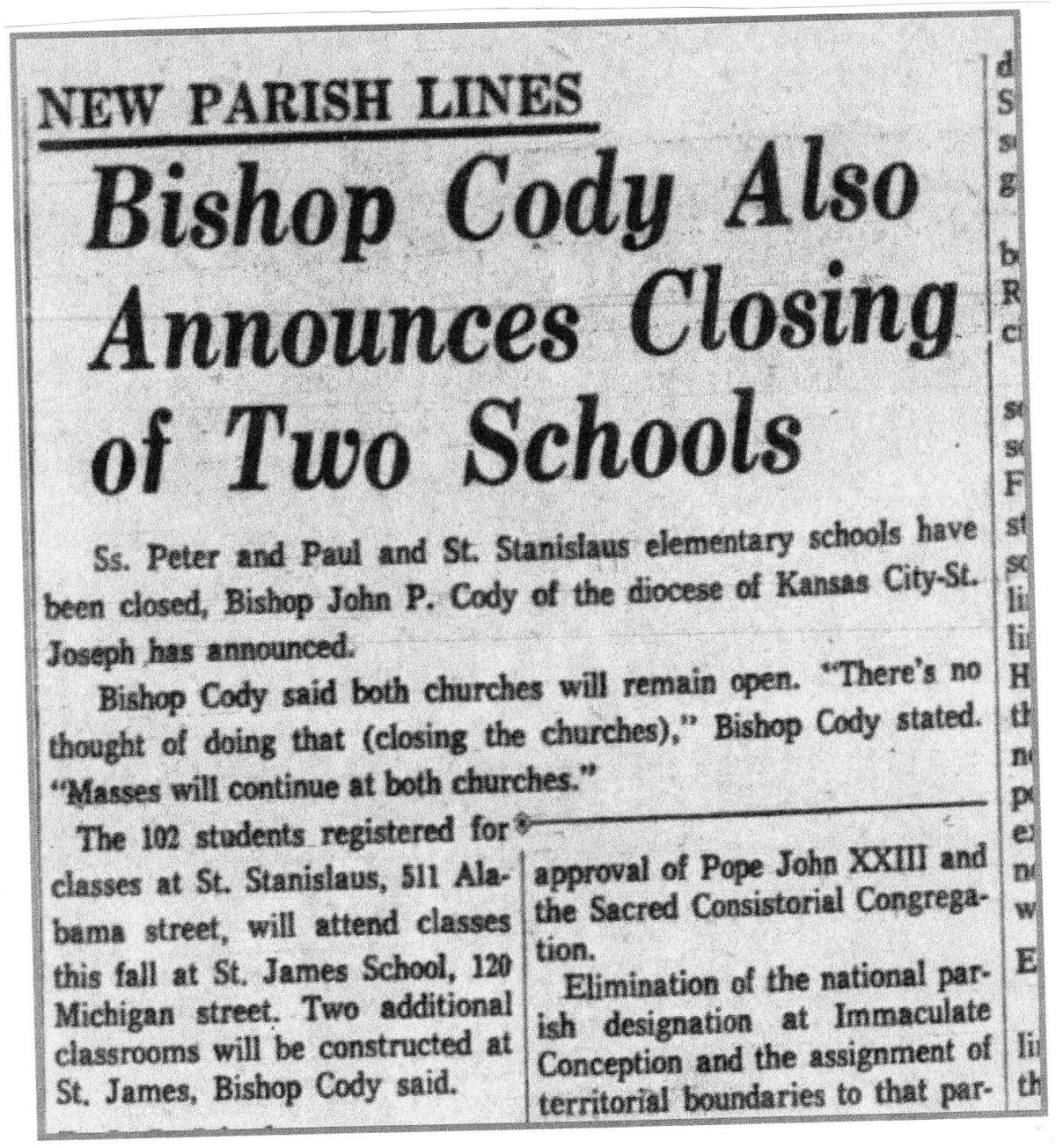 In the mid-1960s, I was a student at Co-Cathedral Elementary School and a guard on the basketball team.

We played in the Parochial League, a group that included St. Mary, St. James, St. Francis, St. Patrick and Immaculate Conception. Many of our games were in the old Christian Brothers gym. And as I recall, the big stars of the league were Roger Karkoski of St. Francis and Jim Nadolski of I.C.

Go back 10 years before that, though, and you’ll find the league was bigger, with teams representing Sts. Peter and Paul, Holy Rosary, St. Stanislaus and the Catholic Orphanage.

Those schools, along with the orphanage itself, were closed in the late 1950s and the early ’60s by the Kansas City-St. Joseph diocese, led by Bishop John Cody. The students at St. Stanislaus, located at 511 Alabama St., would attend St. James, and students at Sts. Peter and Paul, on Warsaw St. just south of Messanie, would attend St. Francis and I.C.

“In each school, Bishop Cody noted, only three teachers have been available,” the News-Press reported on Aug. 1, 1960. “This means two or even three grades are taught by one teacher. A more thorough education will be possible under the new arrangement.

“By modern requirements, Bishop Cody added, both schools are of sub-standard construction.”

Holy Rosary School, at Sixth and Jackson streets, had closed a couple of years before. Pastor James Brown announced in August 1958 that the move was being made because not enough nuns could be found to teach. Most of the students, he added, would attend St. Patrick School, located six blocks to the east.

The church remained open for two more years before it, too, closed. “The parish, founded in 1888, once had more than 100 families,” the News-Press reported on July 20, 1960. “In recent years, due largely to condemnation of land for highway purposes, the number of families has declined to around 15.”

The orphanage, which sat on the site of the current LeBlond High, was closed in August 1959. Bishop Cody said the nationwide trend was to keep independent children in a Catholic family home. “Placing them in any kind of an institution is seen as a last resort,” he added.

Of the teams in the Parochial League when I was playing, only Cathedral, St. Francis and St. James remain, as I.C., St. Patrick and St. Mary closed in subsequent years. The diocese blamed low enrollment, declining revenues and, in some cases, outdated facilities.

Bishop Cody, who took over the diocese from Bishop C.H. LeBlond in 1955, was praised by some for his actions 60 years ago — and heavily criticized by others. For better or worse, he left the area a year after the closings, being named archbishop of New Orleans in 1961.

“Bishop Cody has earned a reputation as a strong executive held in highest esteem by the Vatican,” the News-Press said in an editorial. “He may yet have further steps on the ladder.”

Indeed. Cody eventually became archbishop of Chicago. And a cardinal.

The old Catholic schools have their disciples. I have a friend who’s proud of graduating from St. James, yet still talks lovingly of her early years at St. Stanislaus.

Expand that to our public schools, and you could write a book. Webster, Bliss, Everett, Sherwood, Noyes (to name only a few), all have former students who stand by their alma mater.

Maybe it’s because as we age, memories mean more and more to us. And our schools hold a special place in that.

Corby Pond once was a lively place