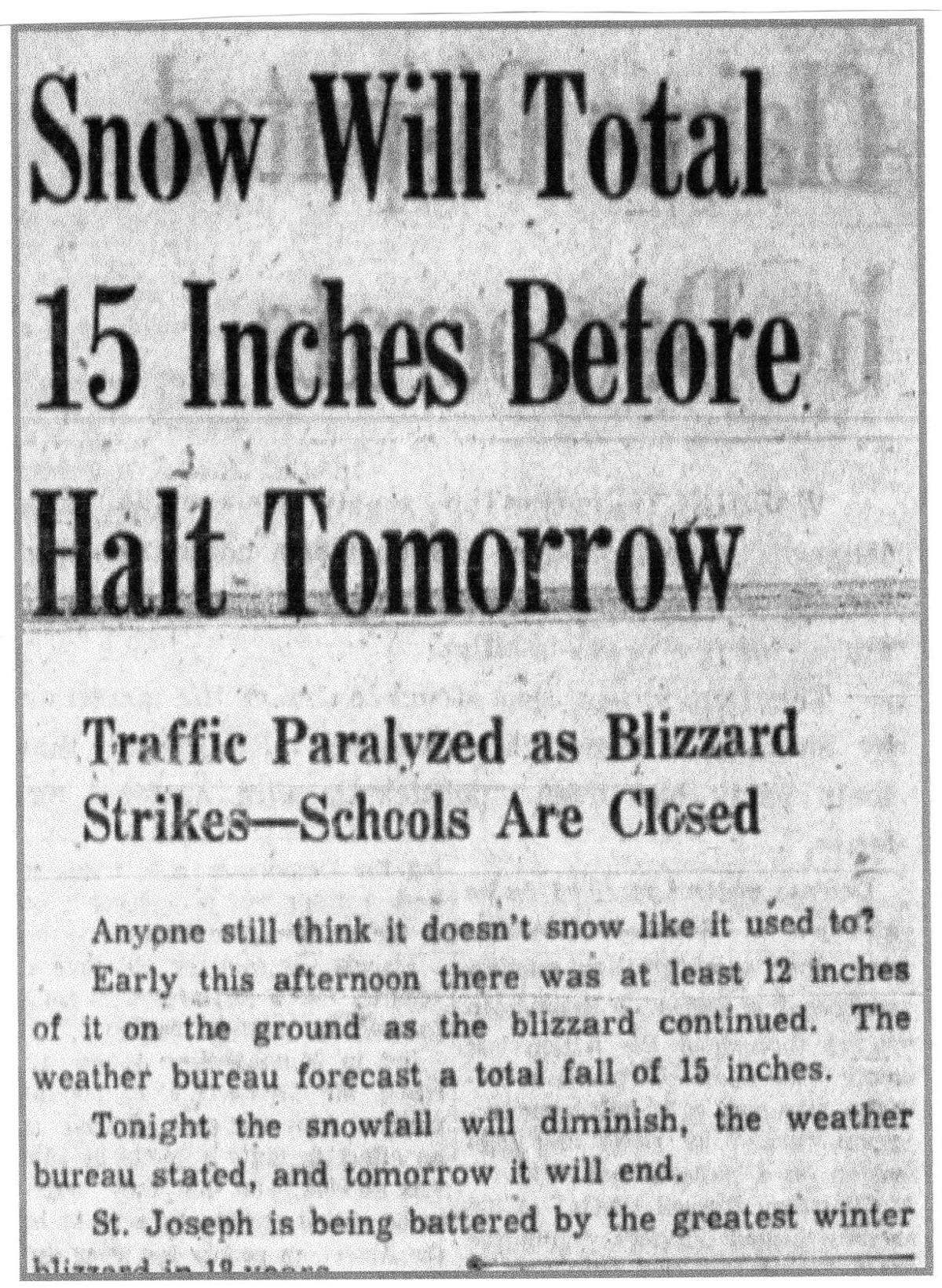 George Cordonnier believed the one in 1958 was the worst he’d ever seen. Considering he worked years for the city streets department taking care of these things, that’s saying a lot.

Alonzo Weston, News-Press columnist, remembers 1979 as the worst one.

As for me, I’d have to say 1978. Two of them, in fact, one over Valentine’s Day, which threw a wrench into many couples’ dinner plans.

What is the “worst one?” A snowstorm, of course. And this being the season for them, it seems a timely topic.

Oddly enough, though, the storms had a bright side in some cases. Read on.

For Cordonnier, 1958 was difficult because city crews were trying to battle a 15-inch snow with only two graders and no plows. “That’s all we had at the time,” he told a reporter years later.

The snow arrived on Jan. 21 that year. “Motor coaches were used in place of trolley coaches on the Jules Street line this morning,” the News-Press reported. “Trolley power was kicking out yesterday because of the heavy drain by coaches making their way through the thick, wet snow.”

Then there was the 10-inch blizzard over Christmas in 2009. In a story headlined “THE WEATHER OUTSIDE IS FRIGHTFUL,” reporter Andrew Gaug noted “overnight snowfall accumulated enough to keep most people at home, harsh winds created blizzard conditions and snowdrifts kept most people from venturing outdoors.”

It was even worse in northern parts of the Midland Empire. “Interstate 29 was closed from Mound City to the Iowa line,” Gaug continued, “as was U.S. Highway 71 from Maryville to the Iowa line.”

“This is as bad as I’ve ever seen it,” Patton said at the time. Added Scherer: “The really sad thing is that it happened right at Christmas. So many families had to cancel their plans for holiday get-togethers.”

For me, the two monster storms we got in 1978 — a foot-high each, on Feb. 13 and March 2 — certainly created problems, but aided my career. I was promoted from reporter to assistant city editor the next year and am convinced my snow stories helped me attain that spot.

“Literally everyone and everything was dependent on the snowplows to free them from the shackles of the storm,” the Gazette reported on Valentine’s Day. Added Mayor Bill Bennett: “This is something that happens once every 20 years or so … I hope.”

Fast-forward to the next year, 1979, when two 9-inch storms during the first half of January threw the town into a tizzy again. “Snow this weekend immobilized the area, curtailing mail delivery and hampering newspaper delivery,” Susan Hahn reported on Jan. 15. “Readings at Rosecrans Field indicate the amount of snow on the ground doubled to 18 inches.”

Roofs partially collapsed at Woolworth’s at East Hills Shopping Center, at St. Joseph Packaging and at a storage shed at Walnut Products. Ken Christgen, Walnut president, told the Gazette “the snow cannot be removed because the roof probably would not support the workers.”

It was an interesting time for News-Press columnist Alonzo Weston. “My daughter was born during all of that,” he says, “and the drifts were so deep we had problems getting to the hospital.

“On the other hand, I had just been laid off from my job at Rainbo Bakery and was able to pay my bills that winter by shoveling snow.”

See? There indeed is a silver lining in every cloud. And maybe in some snowdrifts, too.

Perils, fruits of the winter