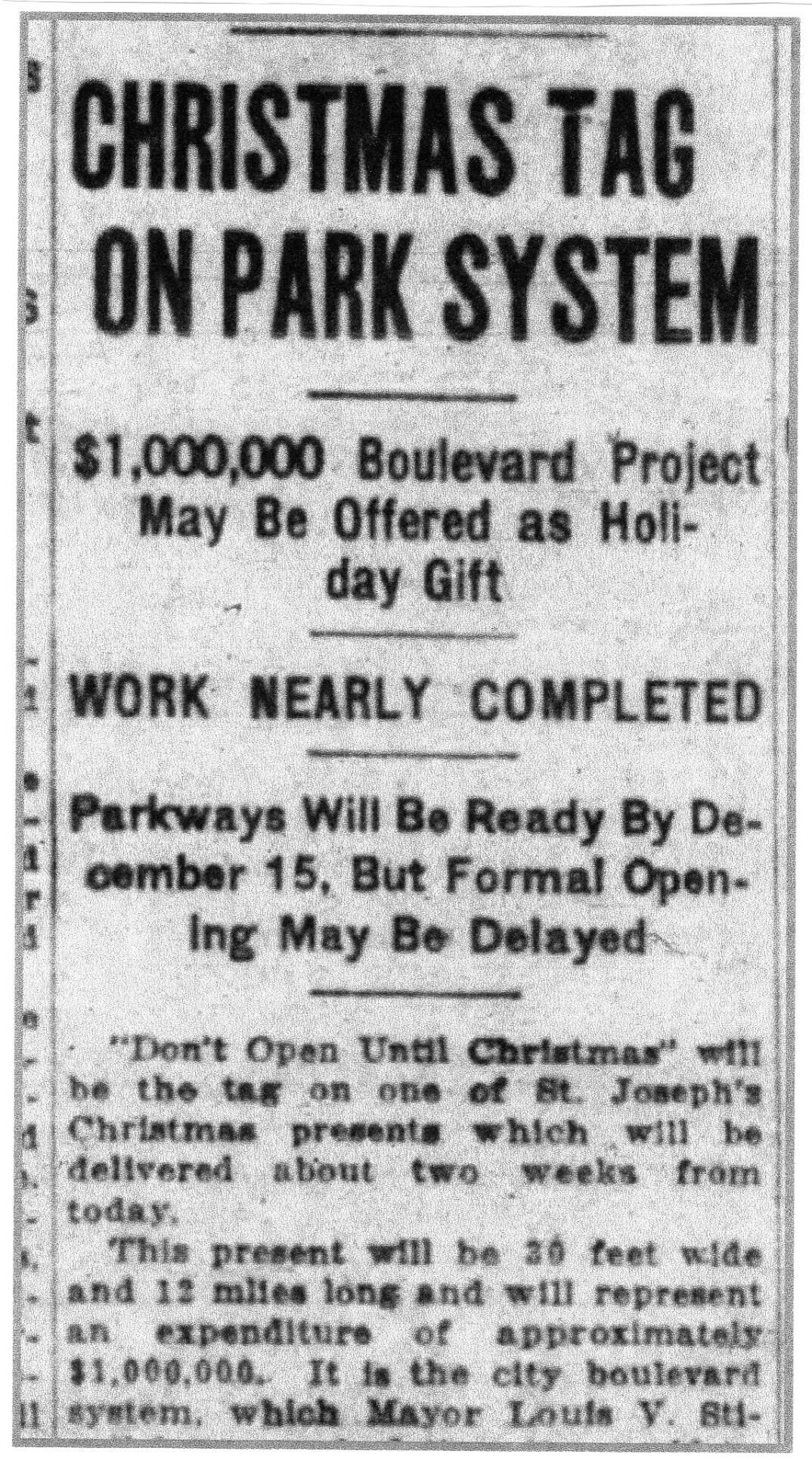 Do you call it The Boulevard? Or The Parkway?

Whatever the answer, it’s one of St. Joseph’s finest assets, a meandering, scenic drive (or walk or bike ride) through the city. Several times over the years, friends have visited St. Joseph and asked me, “What’s there to do here?” I always take them for a drive on the boulevard, and they’re always impressed.

Surprisingly — or maybe not, considering the length of the drive — it took 18 years to put it all together. Another interesting fact is that Wyeth Hill, known then as Prospect Hill Park, and Carden Park, known as Observation Park, were at one time planned as part of the system.

The initial idea came from the nation’s “City Beautiful” movement, which encouraged cities to use parks and other green spaces to “dress up” their towns. A new City Charter, approved in 1909, gave St. Joseph officials the power to condemn and purchase property for park and boulevard purposes and also authorized a park tax. Shortly thereafter, the St. Joseph Ad Club brought Charles Robinson, an architect from Rochester, New York, to the city to survey the town and suggest a plan.

Robinson’s proposal was published in the News-Press on April 27, 1910. His boulevard started at Prospect Hill Park, winding through the North Side to Krug Park, and continuing on Karnes Road to Ashland Avenue. From there it took a sharp turn to the southeast (yes, east!) until eventually meeting up with 28th Street (Noyes Boulevard) and on to 30th Street and Bartlett Park. At that point it turned to the west and took 22nd Street into the South Side, then on to Hyde Park.

But not everyone was sold on the plan, and Robinson began working on another big project for which he was hired: drawing up plans for a new City Hall. Officials then hired George Kessler of Kansas City as an adviser, and he urged the inclusion of Carden Park (what many of us know as Devil’s Backbone): “A driveway to connect Observation Park with the rest of the boulevard system will have to be provided,” the Gazette reported on Oct. 4, 1912.

Kessler, though, had problems with Mayor George Pfeiffer, and he wasn’t around long. Meanwhile, a number of property owners objected to valuations the city had placed on their land and filed lawsuits. In all, 15 “park condemnation” suits were filed.

The project progressed slowly, but still progressed. A big year was 1917, the News-Press reported, quoting park superintendent L.C. Tilton: “Much of the work has been centered in the 12-acre parkway from Noyes Boulevard and Messanie Street to 30th Street, which is to form the connecting link of the formal boulevard system.”

Probably the biggest step was taken in 1918, when the city hired noted architect George Burnap. Park board president Milton Tootle Jr. told the News-Press of Burnap’s first assignment: “To proceed with the development of Hyde Park, where no systematic work has ever been done.”

Well, the Hyde Park work was indeed done, Burnap developed a simpler route going from Krug Park to Hyde Park, and all the lawsuits were finally settled. A bond issue to help pay for the work was passed. The Parkway System opened on Dec. 22, 1927, with Mayor Louis Stigall and members of the park board — Tootle, John McDonald and Thomas Richey — taking the first drive.

“An ambition of many years is being realized today,” the News-Press reported in its lead story. “The 12 miles of park drives rival in beauty any other city in America.”

A subhead on the story read: “Not constructed for speed, sharp curves make careful driving necessary for safety.”

Postcards from the past: Missouri Valley Trust

Keep active during a pandemic winter

A rainy Monday and Tuesday ahead then drying out by Thanksgiving