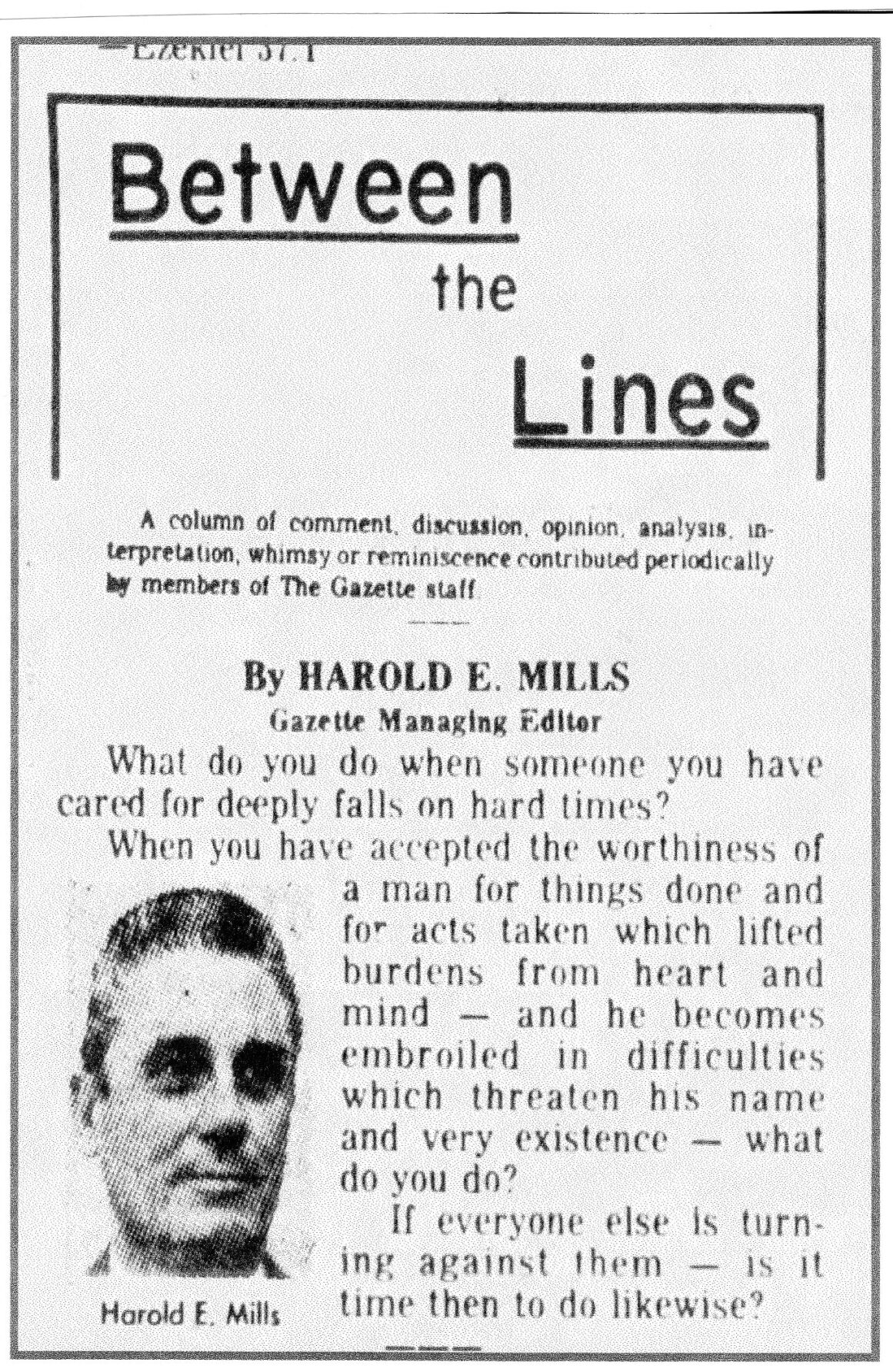 Go back through old issues of the News-Press and take a look at “The People’s Forum,” and you’ll see that a large share of the letters dealt with the Timely Observations column. Some are complimentary and others are critical, but they all possess one trait: The columns stirred the reader enough to pick up pen and paper and write a letter.

What were the Timely Observations, you ask? Well, at the time (we’re talking roughly the 1930s through the 1980s), the News-Press ran four or five short editorials every day — as opposed to the lengthy, single one that runs today. That left room for a long, rambling, more detailed account of one of the day’s top events.

Which is where Timely Observations came in.

The Gazette had a companion piece, Between the Lines. We’ll get to that in a minute.

It’s my understanding that Timely Observations was created in the 1930s by long-time editor Arthur V. Burrowes, who wrote most of the columns through the years (although other staff members contributed also).

“Socialism! Socialism! So says our popular and energetic mayor, when he talks about public housing,” Burrowes wrote in a Timely Observations piece on Aug. 6, 1951. He was speaking about Mayor Stanley Dale and his opposition to a federal public housing program the city was considering.

“There are several million people in our country who today cannot find decent housing at rentals they can afford to pay,” the column continued. “The problem cannot be solved by private enterprise.

“Socialism? Nuts! Rather, as that Catholic priest and that St. Joseph minister said at a recent meeting: ‘True Christianity’.”

That drew an angry retort from St. Joseph businessman Walter Bartlett a few days later. “It is strange that thoughtful people should be so blind as to refuse to recognize socialized housing as another long step in the direction of an actual socialistic state,” he wrote in a letter to the paper.

In the end, the voters agreed more with Bartlett than Burrowes, as the issue failed 2 to 1.

Regarding Between the Lines, an especially interesting one was written by Harold Mills, Gazette managing editor, in November 1973. Richard Nixon was under attack for Watergate, but Mills came to his defense:

“There grows a nagging feeling that Richard Nixon made missteps. Not that others haven’t. Heaven knows, they have. But Richard Nixon is expected to be perfect.”

Mills said nothing regarding Watergate had been proven so far and noted that recent presidents had made mistakes that in some circles were not challenged: Harry Truman’s actions in Korea, John Kennedy’s moves in the Bay of Pigs and Lyndon Johnson’s decisions regarding Vietnam. “But Richard Nixon,” he added, “must not err.”

“You who want to destroy Richard Nixon, don’t count on us to be a party to the lynching. We don’t believe in such things.”

A few days later, the Gazette ran a page of letters it had received. A sample: “There is always a first time to write a fan letter, and I feel this is such a time,” wrote Mrs. Clark Brown, 1908 Clay St. “You have put into words my feelings, and have made my day.”

Every single letter was in support of the president, and in praise of Mills’ column. Sometimes you just strike a nerve.