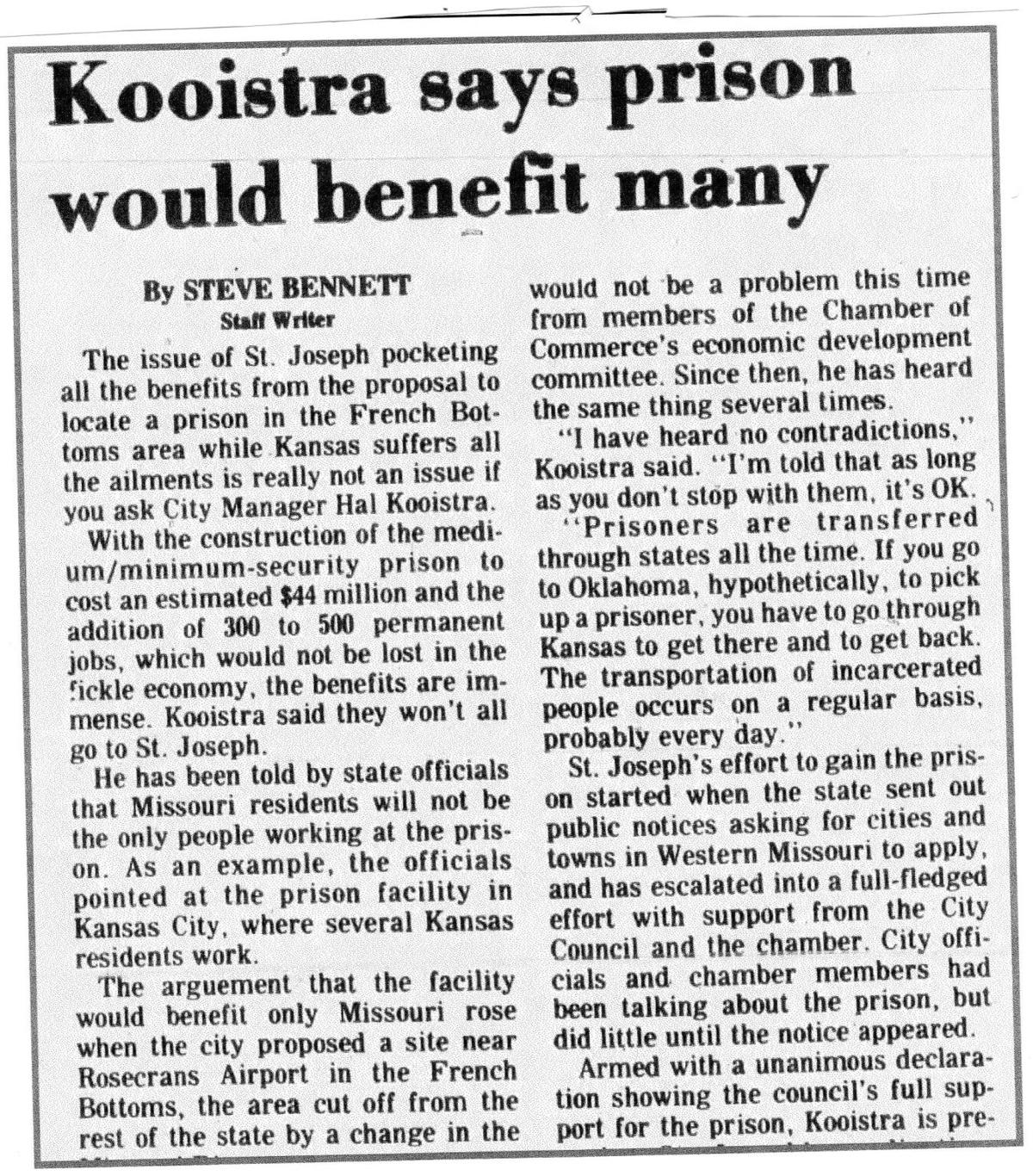 I ran into an old friend the other day who complimented me on this column. But he had a concern:

He had a point. Many of the topics I’ve covered so far have dealt with post-World War II America. So I thought, well, why not take a look at the news during a week in the 1980s, maybe 1985? How about Oct. 19 through 27, when the Royals were playing the Cardinals in the World Series? Here we go:

Oct. 19 — Robin Carolus of the Chamber of Commerce said the World Series has done much to promote St. Joseph. Local hotels and motels are filling up and restaurants are crowded, as all motels in Kansas City are sold out.

Oct. 20 — St. Joseph’s council-manager system is still the best form of city government, Frederick W. Slater wrote in a Timely Observations piece. An anti-charter group, he noted, “is trying to return the city to a ‘good old boys’ form of political maneuvering.”

Oct. 21 — The Lafayette High girls’ tennis team swept the singles matches on its way to a 7-2 victory over Cameron. Winning their contests were Lisa Wattenbarger, Amy Fuston, Erica Dugger, Sherri Wattenbarger, Kathy Reynolds and Tammy Watkins … Syndicated columnist Andy Rooney always has a gripe about something, and this time it’s Howard Cosell: “Words flow from Howard Cosell’s mouth like lava from Vesuvius,” he writes. “Why can’t sports announcers leave us alone?”

Oct. 22 — City Manager Hal Kooistra is praising a plan to locate a prison in the French Bottoms area, near Rosecrans Memorial Airport. The Missouri River would serve as a “moat” for the prison, Kooistra said, and the Air Guard unit there would add security … Samantha Grider and Amy Arnold have been selected as student directors of the musical “Grease,” which Benton High School will present in November.

Oct. 24 — Enrollment at Tarkio College is up 15% for the fall semester, said president Dr. Roy McIntosh, adding “We’ve been attracting people from the county, from across the state line and a lot of non-traditional students.” … Sassafras Lass, a craft store owned by Mary Jane Clement, Connie Tannett and Carol Hunt, is something new in St. Joseph, reported Nancy Gaarder: A thriving small business owned by women.

Oct. 25 — The United Way raised more than $1.6 million in exceeding its goal for this year, campaign chairman Terry Steinbecker announced last night at a victory dinner. Steinbecker thanked all contributors, with special mention to Johnson Controls, which pledged $105,000, the largest single gift ever.

Oct. 27 — About 20 seniors at Bishop LeBlond High are participating in the school’s Service Program, designed to help them reach their goal as a “Christian servant,” said instructor Theresa Rizzo. Among other tasks, the students play Bingo with senior citizens and help elementary school children with their studies.

Oh, yes. The Royals took the Series in seven games. But you knew that already, didn’t you?