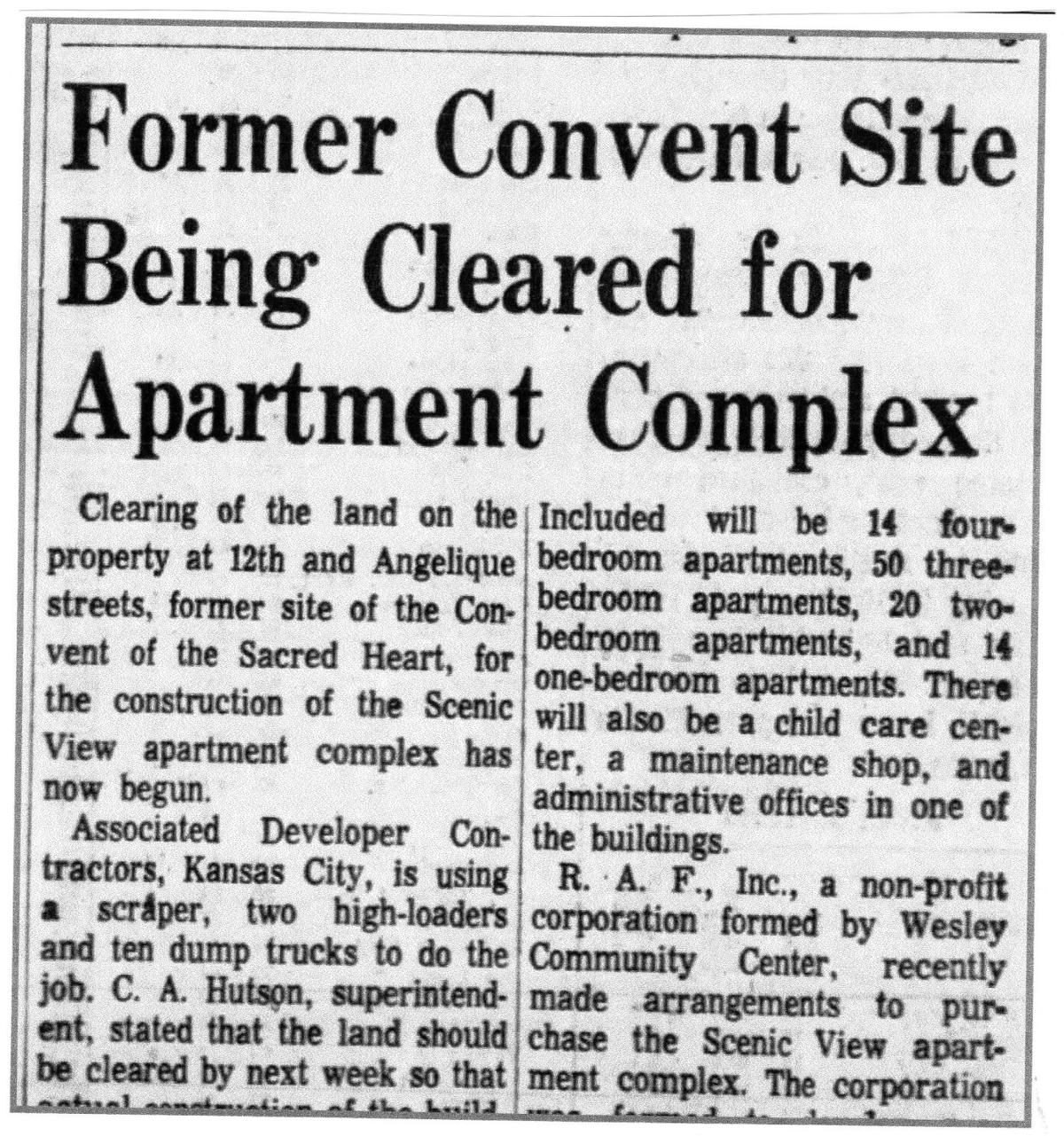 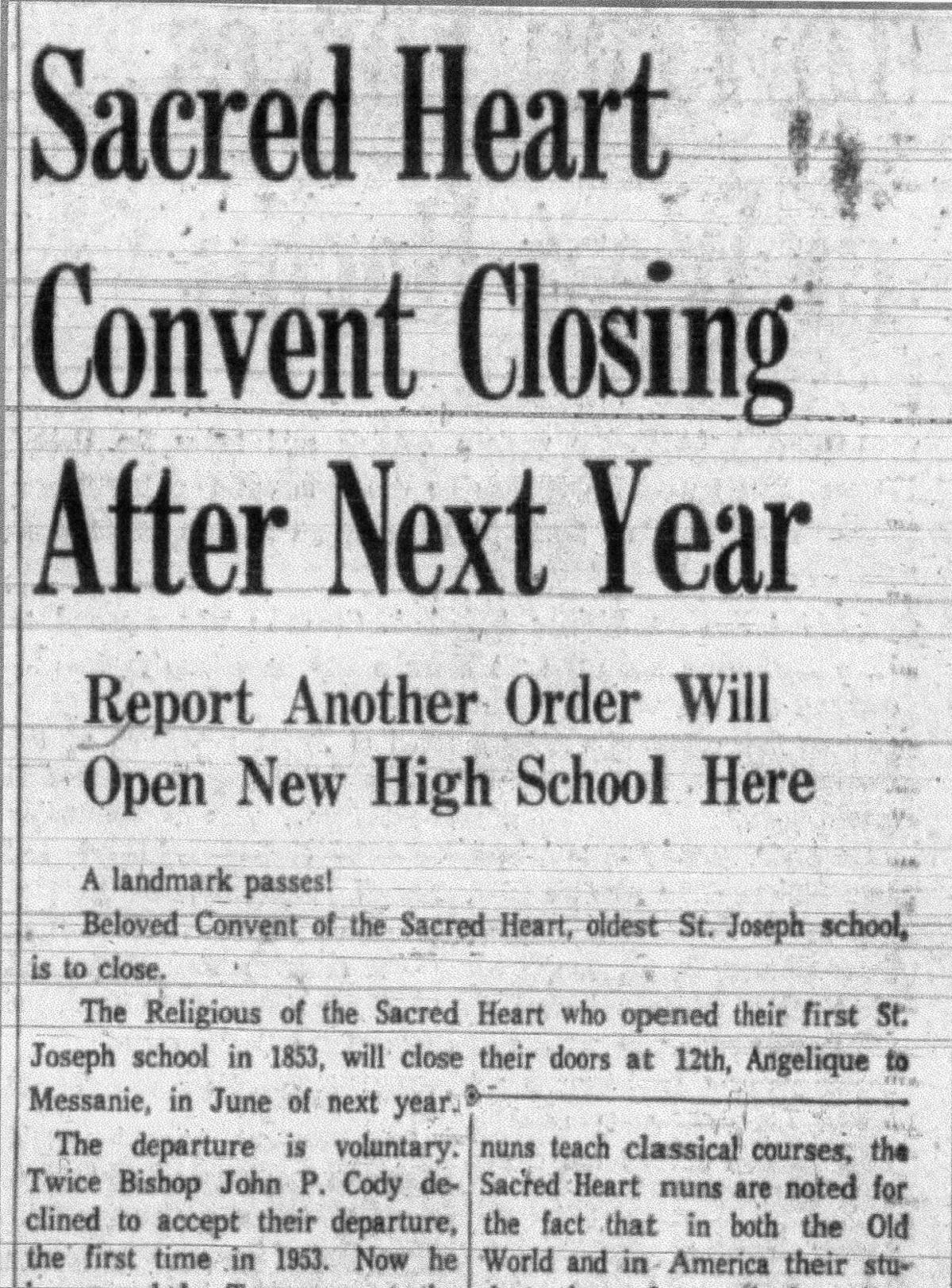 Did you attend Lafayette High School? How about Benton? If so, you may have cringed when a proposal came along to close those schools in a reorganization effort. That would be only natural.

A number of us are around, though, whose high schools — Christian Brothers, the Convent, Bartlett and Pickett — closed years ago. I thought it might be interesting to look at the reasons for those moves, and we started last week with C.B. Today it’s the Convent of the Sacred Heart

“A landmark passes! Beloved Convent of the Sacred Heart, oldest St. Joseph school, is to close.”

That’s how we got the news on June 4, 1959, in a News-Press story that led the front page. It went on to say there were three principal reasons for the closing: Our local nuns were needed to fill positions in other cities; the curriculum no longer met current needs; and costs had become too high.

The nuns operating the Convent, on 12th Street between Angelique and Messanie, had educated Catholic girls in St. Joseph – and Protestants as well – since 1853. That’s before the Civil War.

“The school has never offered the courses that seem to be in demand today,” we reported. “This society has given its efforts to college careers rather than home arts and business education.

“Also, the operation of the St. Joseph house is a financial burden. Expenses have far exceeded tuition fees.”

The next day, Bishop John Cody announced that the Benedictine sisters of Atchison, Kansas, had agreed to open a high school for Catholic girls here. Details were still being worked out, but reports were that the new school would be near 36th and Frederick, the site of the former Catholic orphanage.

Shortly after the announcements, the True Davis Jr. Foundation purchased the Convent property and offered it to the St. Joseph Museum. Director Roy Coy had said the museum was running out of space, and the Convent building could be a solution.

“The Convent of the Sacred Heart is a revered institution to the people of St. Joseph,” the News-Press said in an editorial. “There are legions manifold, sons and daughters of ladies long gone, who for memory of those dear ones, would like to see the Convent converted into St. Joseph Museum.”

But it was not to be. The museum board rejected the offer, saying it would take more than $250,000 to renovate the facility. “We just don’t have the money,” Coy told the Gazette.

A plan then emerged to have the building used as a branch campus of Tarkio College, but that, too, died for lack of money. At that point the building was razed and the land offered to the city for use as a park, but both the parks board and the City Council were cool to the plan.

All this time, there had been reports of developers wanting to build apartments there. In March 1970 came word that a Kansas City firm, Sarco, was doing just that. A few months later, the News-Press reported that Wesley Community Center would buy the property to provide low-income housing.

Reporter Mary Helen Burrowes, a Convent alumna, wrote an op-ed piece several years back in which she asked one big question: Where were the preservationists?

“That beautiful building … if it could no longer be a school, there were still many reasons for saving it — the hardwood floors, the curved staircases, the flagstone walks, the stained-glass windows.”

I’m sure many folks agreed with Mary Helen when she wrote that in 1987. I’ll bet even more would today.

‘It’s up to you to speak first’