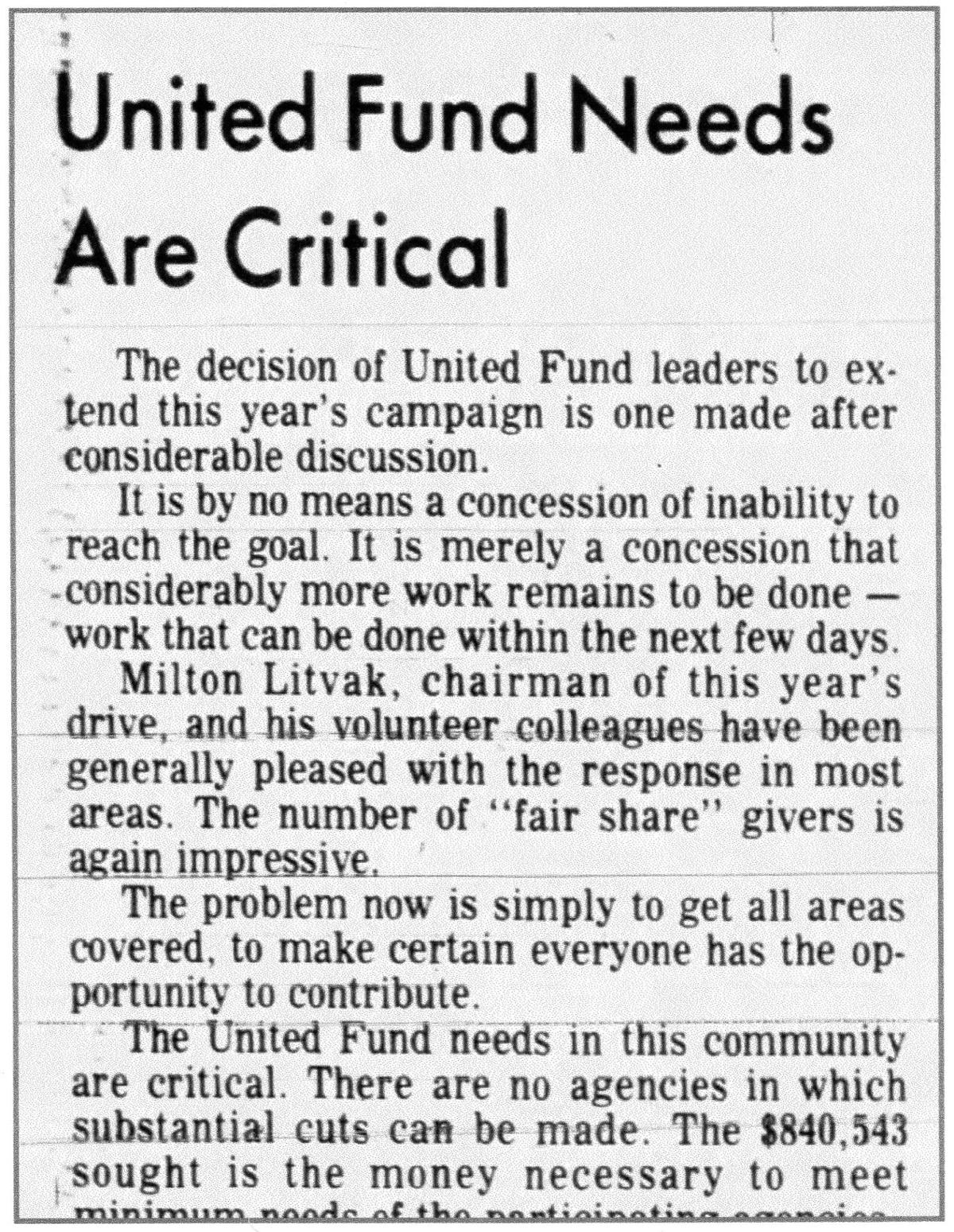 A recent News-Press story reported that the United Way of Greater St. Joseph was beginning its 2021 campaign and had set a goal of $2.4 million. It made me think of 1974, the first year I covered the campaign as a new member of the News-Press cityside staff.

Then, however, it was known as the United Fund. Which is one reason for today’s column.

Whether it was called the United Fund … or the Federation for Charity and Philanthropy … or the Community Chest … or the United Way, the goal has been the same: To help the less fortunate in our community.

The other reason is that, well, I haven’t thought about that 1974 campaign in years and am curious as to what’s in the files. Let’s take a look.

The drive that year was held in October, with a goal of $840,543. “If people of the community will respond, we will meet our goal,” Milton Litvak, campaign chairman, told more than 200 volunteers at the kickoff dinner at the Ramada Inn. Associate chairman Walter Crandall added: “We have seen some positive indications during the pilot campaigns.”

Indeed they had. Industrial division chairmen Dick Larson and Bill Brown told the crowd that the Wire Rope Corp. had achieved 110% of its goal. Urban division chairman Mike Meierhoffer reported that merchants at East Hills had increased their contributions 122%. Federal chairman Lou Pinger said donations in his division were up 129%.

Lest you think only men were involved in this campaign, think again. Mrs. Robert Keatley was board president, and Mrs. Douglas Esson, Mrs. Charles Richmond and Mrs. G.T. Carpenter were division leaders.

Throughout the month, tours were given of five selected United Fund agencies: The Family Guidance Center, the Bee Hive, United Cerebral Palsy, the Sheltered Workshop and the Black Citizens for Progress Youth Center. They were among 22 agencies supported by the organization.

Report luncheons were held every week at the Hotel Robidoux. On Oct. 9, the total raised was $261,770. By Oct. 16, that number had risen to $525,251. Originally the drive was due to end Oct. 24, but leaders discovered they were thousands of dollars short. So the campaign was extended to Oct. 31.

“This will give us more time to contact potential donors,” Litvak said.

The News-Press chimed in. “The United Fund needs in this community are critical,” we wrote in an editorial. “Reaching the goal is possible. For the sake of the thousands of beneficiaries, it must be reached.”

That last-minute push was a good idea. “United Fund goal topped,” the Page One Gazette headline proclaimed on Oct. 31. Litvak told volunteers at the victory dinner that the goal was reached “through the efforts of hundreds of volunteers, through dedication and hard work and through the generous support of individuals and firms.”

As it turns out, this was the last year for the United Fund in St. Joseph. The organization became part of the United Way in 1975. It was the 18th successful United Fund drive, which followed the old Community Chest (which in turn, had succeeded the Federation for Charity and Philanthropy, formed in 1916).

Looking through the clips, I’m struck by a statement from Litvak at that victory dinner: “We are a community that shows we care about people.”

That’s been true through the 105 years of charity giving in St. Joseph. Here’s hoping the winning streak continues.