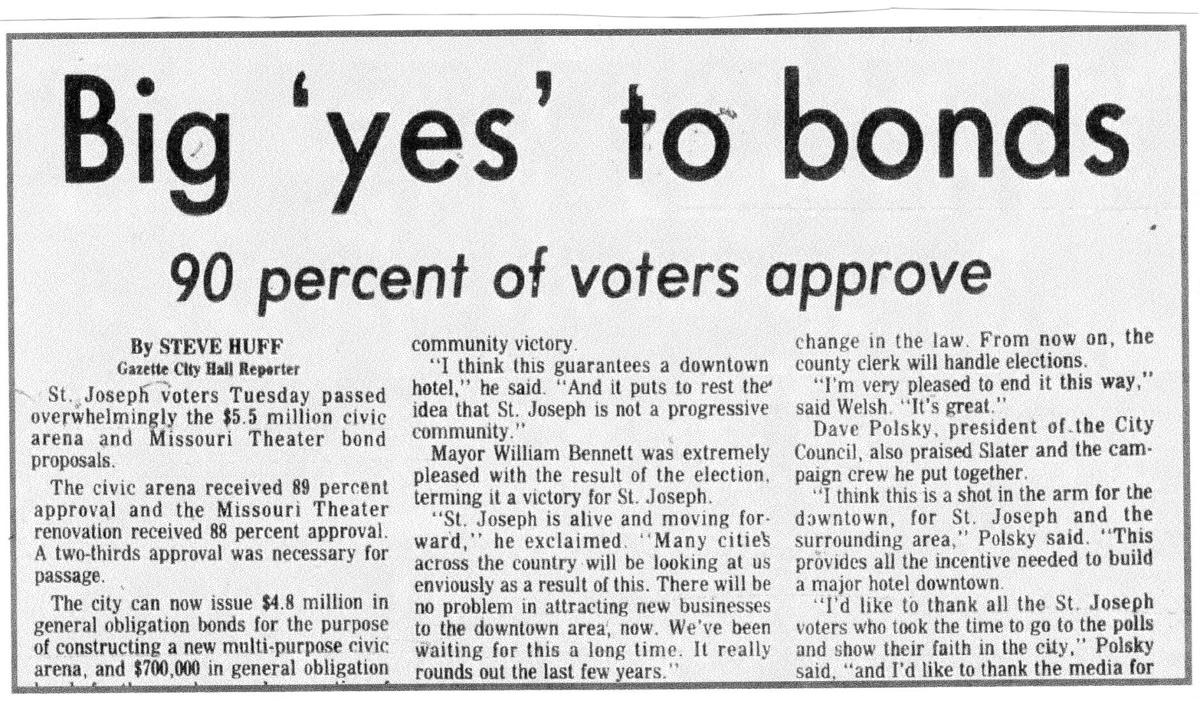 Local voters will go to the polls next month to consider a $107 million bond issue that would build a new high school, renovate Central and convert Lafayette and Benton to middle schools. While this seems an ambitious plan — and in this day and age, it probably is — a bond election we had here in 1938 simply staggers the imagination. And one in 1977 was also impressive.

Hold on to your seats.

The football field and bleachers at Central High

New gymnasiums and auditoriums at Lafayette High and at Sherwood, Hall, Blair and South Park schools

A new sewer system for

The total cost of the plan was $2.5 million. The proposal was broken up into 14 bond issues, separated by subject. All the improvements listed above passed by a required two-thirds majority, with the school bonds being approved 3 to 1.

Regarding Rosecrans, the News-Press reported, “The site lacks only the runways to make it one of the best flying fields in the country.” And elsewhere in that story: “The present Central Police Station at Seventh and Messanie streets is regarded as far inferior to those of the average cities of St. Joseph’s size.”

Mayor Phil Welch told the Gazette: “By their vote today, the people of St. Joseph have shown their faith in the future of this city. They knew we needed the improvements and realized that now was the time to obtain them.”

Regarding the 1977 election, a little background is in order. The old City Auditorium had fallen into disrepair, with problems ranging from a bad roof to a broken, outdated heating system. An attempt to bid out the work yielded no takers. None. So a new arena was the only solution.

Meanwhile, the Missouri Theater also had its share of problems, and there were even some voices urging demolition. The theater was owned by Town Hall Inc., but officials thought it would be in the city’s best interests to own it.

The arena carried a $4.8 million price tag, while it would cost the city $700,000 to buy and renovate the theater.

“But it has been our feeling that St. Joseph needs another first-class facility to meet other needs. The Missouri Theater is a building that can serve a variety of purposes, from symphonies to stage plays.

“St. Joseph needs both facilities — and I hope the voters agree Tuesday.”

They did. Overwhelmingly. The arena received 89% approval, and the theater came in at 88%.

“St. Joseph is alive and moving forward,” Mayor William Bennett said. “Many cities across the country will be looking at us enviously as a result of this.”

Alive and moving forward. A lot of folks would like to hear a little more of that today.

Perils, fruits of the winter