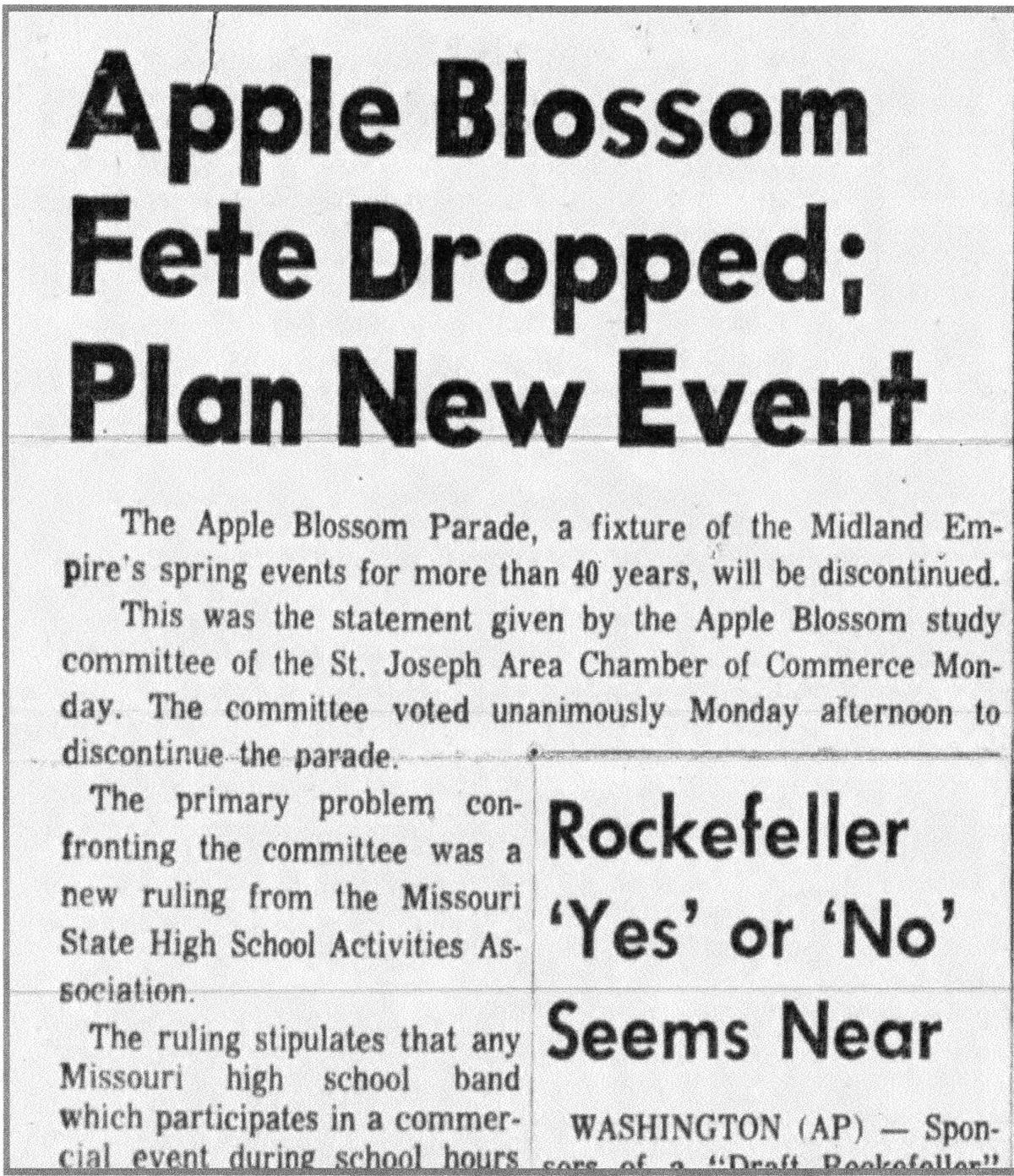 The return of a much-loved event next month is a chance for St. Joseph area residents to “have a little fun,” in the words of the organization’s president.

But it runs deeper than that. Seventy-five years ago, when the event resumed after a hiatus, the News-Press said its return was vital to the public morale.

We’re talking, of course, about the Apple Blossom Parade, which will be held May 1 after being canceled last year due to the COVID-19 virus.

“We believe everyone is ready for a return to some normalcy — especially a fun normalcy like the parade,” association president Ken Rosenauer said last month.

In a nice side note, the theme celebrates the News-Press and its 175th anniversary. “We encourage you to tell us your stories in your parade entries,” executive director Michelle Wolfe said.

It’s hardly unusual, though, for the festival to be canceled for one reason or the other. War, rule changes, urban renewal, deaths … all have forced the event to take a little break or undergo a makeover. In fact, we all should be thankful that COVID disrupted the schedule for only one year.

The Apple Blossom Festival began in 1924 as a celebration of orchards in St. Joseph and Doniphan County; a parade, banquet and queen contest were added two years later. Things went fine until World War II came along, when the event was either cut back or canceled entirely.

That’s why the big return in 1946 was so welcome. “Once again we will see lovely girls smile from flower-decked floats, and high school bands will vie in breadth and skill,” the News-Press said an editorial.

Those lovely girls continued to ride their floats through the 1950s and early ’60s, years that many believe represent the festival’s heyday. Parades were held on Fridays then, schools were dismissed early and everyone congregated in Civic Center Park afterward for the Sonny Meyers Carnival.

But the event hit another snag in 1968, when the Missouri State High School Activities Association, which holds sway over marching bands, ruled that any group performing at a commercial event during school hours be banned for at least one year.

OK. How about holding the parade on a Saturday? Area bands were surveyed. “Those results were overwhelmingly negative,” the News-Press reported.

So there was another break, and it got even worse a few years later, when urban renewal came along and Downtown streets were torn up.

By 1974, though, the streets had been put back together, area bands finally agreed on a Saturday parade and the festival was back on, sponsored by the St. Joseph Jaycees. Ron Rosenauer (Ken’s brother), a Jaycee member, took the lead on the matter and ran the parade for 20 years before his death in 2000. A few days later, a News-Press headline said it all: “Future of parade now in question.”

But not to worry. The News-Press and the Downtown Association agreed to sponsor the event, with Ken Rosenauer’s help. Within a few years, Rosenauer and Wolfe had taken the reins, which they still hold today.

Looking through the clips, I’m especially struck by an editorial the Gazette ran in 1943, when only parts of the festival were held: “It is well not to eliminate too many of the things people enjoyed in peacetime, if they do not interfere with the prime business of beating Hitler,” it said.

“Public morale must be maintained, and as a morale builder the apple blossom comes pretty close to the top.”

I ask you: What could be more noble than beating Hitler? And if you can have a little fun along the way, all the better.

A royal scandal from 85 years ago