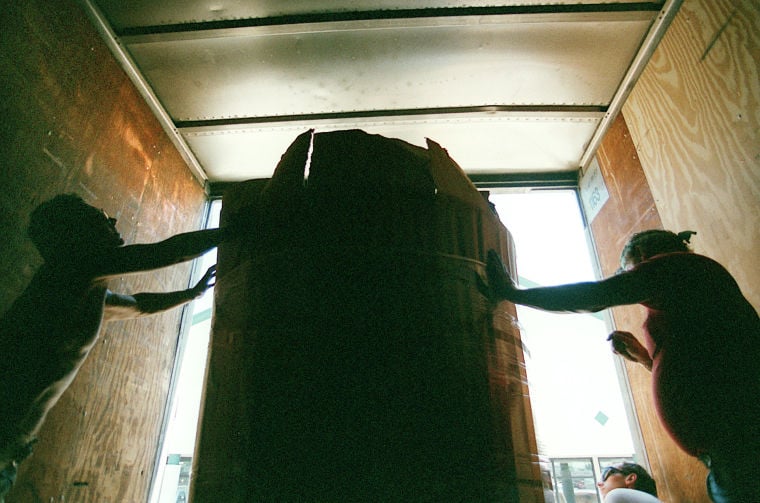 While standing in the back of a trailer, Tom Cook, left, and Bill Lightbody position a copper kettle that was used in the brewing of beer onto a forklift. The kettle held 224 gallons of beer. 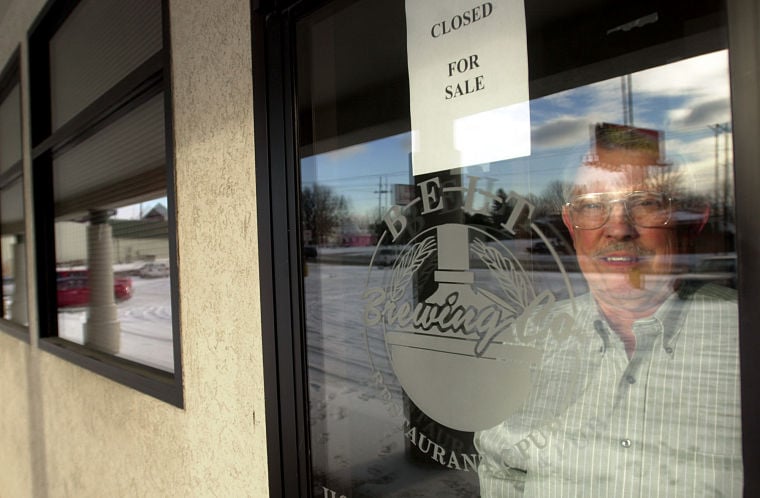 The Belt Brewing Company, which used to be located on the North Belt Highway, closed in 2003. 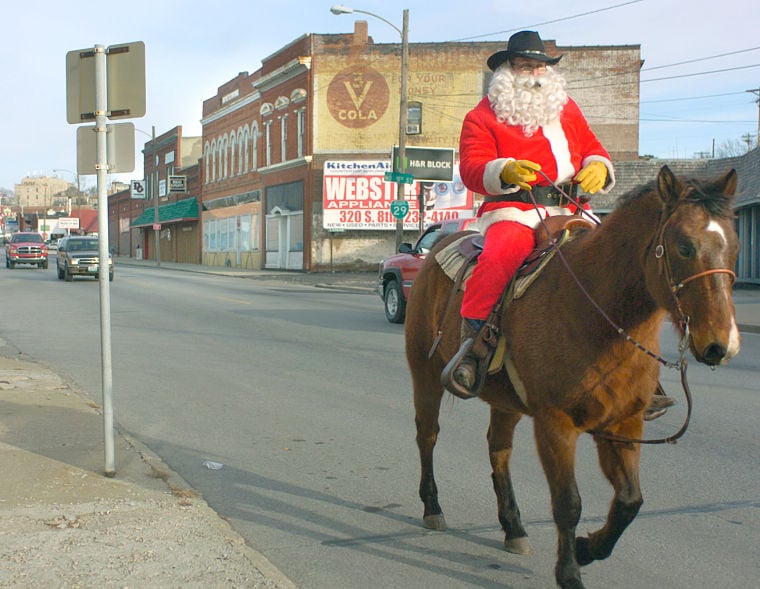 Mark Steiner, a farmer from Maysville, Mo., played Santa, delivering beer to promote the Pony Express Brewing Co., a beer company that once existed based on the St. Joseph iconic mail service. The beer was brewed in Olathe, Kan.

While standing in the back of a trailer, Tom Cook, left, and Bill Lightbody position a copper kettle that was used in the brewing of beer onto a forklift. The kettle held 224 gallons of beer.

The Belt Brewing Company, which used to be located on the North Belt Highway, closed in 2003.

Mark Steiner, a farmer from Maysville, Mo., played Santa, delivering beer to promote the Pony Express Brewing Co., a beer company that once existed based on the St. Joseph iconic mail service. The beer was brewed in Olathe, Kan.

Something has been bugging Norty’s owner Jason Horn, along with other local beer aficionados for more than a decade — St. Joseph has no local microbrewery.

The local brew flavors of St. Joseph left town in 2003 after the closing of The Belt Brewing Company, once located at 2317 N. Belt Highway, and never came back. In response, Mr. Horn wanted to start up his own.

The problem he ran into is the same one other prospective local brewers have found — making a local beer is expensive.

“It’s expensive as hell to get all of the equipment to make it. I mean, we looked at one off-hand,” he says. “You’d have to have a couple hundred thousand dollars to buy all the equipment, then you have to hire someone that knows how to make (it). Either that, or you have to go to school.”

Even for a restaurant and bar that has local name recognition and a loyal customer base, it was still too risky, as the beer would have to be sold at a higher price point than most of the bar’s other beers.

“You’ve got so much invested in it, a pint’s four bucks or more. Now, it’s probably closer to five, and at that point, people in St. Joseph just aren’t buying it,” Mr. Horn says.

It’s a similar problem Belt Brewing ran into more than a decade ago, when microbrews weren’t receiving the popularity and buzz they are now.

In a previous interview, Greg Taylor, former Belt Brewing Company manager, said one of the toughest aspects of the job was getting people to buy its brews over the traditional brands like Miller, Budweiser or Coors.

“There’s a lot of blue-collar demographics in St. Joseph, and those people like domestic beers,” R.D. Johnson, manager of the High Noon Saloon, a pub and microbrew in Leavenworth, Kan., said in a previous interview.

Recent numbers show that may not be the case anymore. Yearly sales of domestic beers have gone down while craft-beer sales have seen a 20-percent sales growth to $14.3 billion in 2013.

Missouri also has seen the number of breweries increase since 2011, from 43 to 49.

Brewing in St. Joseph for about eight years and a co-founder of Foamy Express Beer Club of St. Joseph, Vinny Weille says now is the perfect time to start a microbrew in the area since its presence is nonexistent and business for it in the U.S. is booming.

Seeing previous generations of microbrews in St. Joseph boom and bust, from the successful M.K. Goetz Brewing Co., which closed in 1976, to Mr. Johnson’s failed business venture with The Ale House in Downtown St. Joseph, which was shuttered in 2000, State Rep. Pat Conway still believes that it’s a business idea with potential in the area.

In fact, it’s one that Mr. Conway has seen succeed in Jefferson City, Mo., which has 30,000 less residents than St. Joseph, with Prison Brews, a microbrewery and restaurant that opened in 2008.

“I know it’s expensive, but it seems to me that they’re the same types of population. I think it has the niche for being successful,” he says.

Having been an owner and sales manager of the Midland Bottling Co., which distributed Miller Beer to the area, Steve Culver says he has seen the trends in beer shift, from when Falstaff and Schlitt’s Beer were top sellers to Miller Lite and Bud Light taking over to now.

Much like Mr. Johnson and Mr. Taylor, he saw St. Joseph as a population that wanted something cheap over something crafted.

“St. Joe just hasn’t been able to support a microbrewery,” he says. “St. Joe always did tend to (buy) the competitive-priced beers.”

Though Mr. Culver doesn’t hesitate to add: “Your younger generation coming on, they’re into the imports and craft beers,” he says. “These kids will spend money, and they’ll spend it on the super premiums. In this environment, a microbrewery might be good in St. Joe.”

In every conversation concerning the possibility of a microbrewery coming to St. Joseph, it always circles back to costs and, just as important, weathering the dips in business when the hype dies down.

“You’re not going to be profitable for a few years, so you’re going to have to suck up the losses and fight your way out of the hole,” Mr. Horn says.

Each talk offers tips to these hypothetical microbrew owners — balance a good menu with beer of equal quality and have a good location. While dreaming of being the next Boulevard Brewing Company is nice, it’s not realistic.

“If you make it a local beer, people in town would be all behind to where your goal is not to distribute, but make St. Joe a destination for beer drinkers to come to,” Mr. Weille says. “The whole point of it would be to benefit your local community.”

As it remains, it’s still a hypothetical.