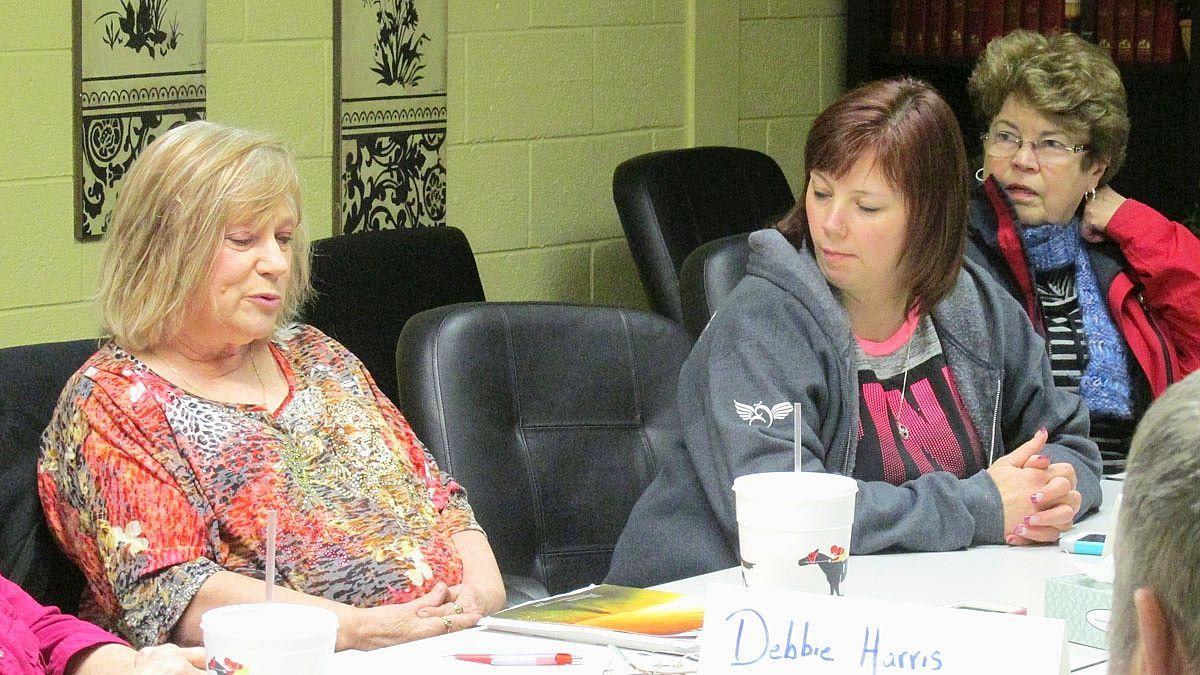 Debbie Harris, left, talks about her late husband, Bill, during a GriefShare gathering at Brookdale Presbyterian Church in mid-February. This will be the sixth year for the free 13-week classes to help those who are grieving. 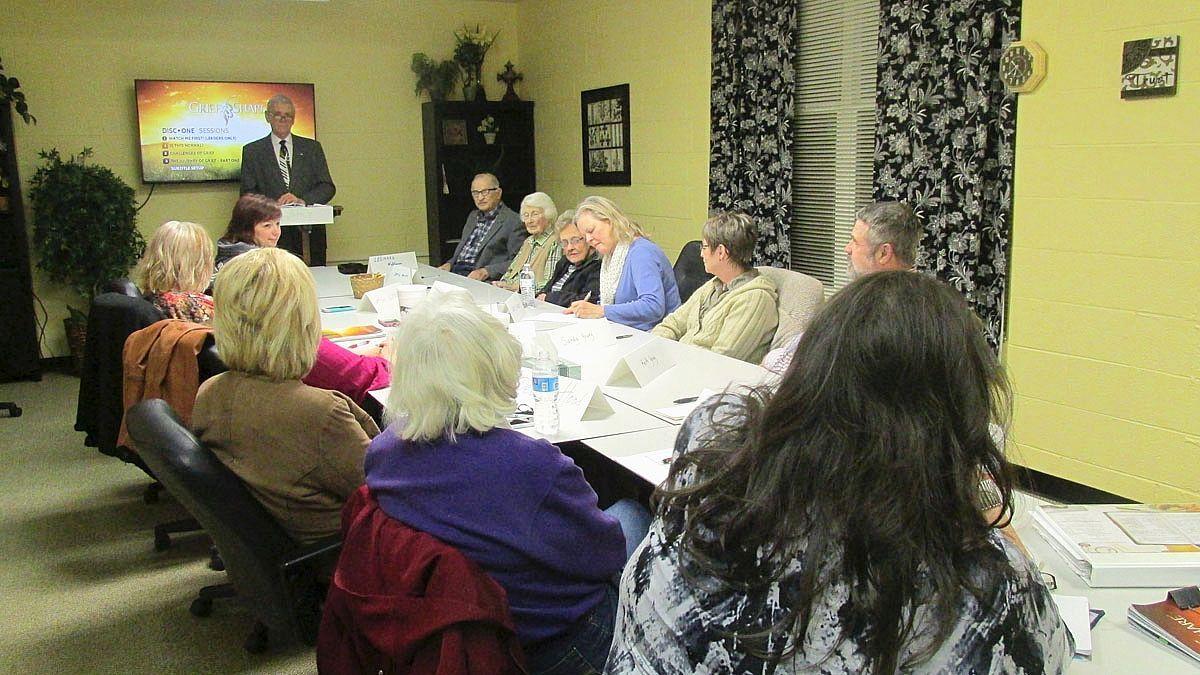 Gary Butler, one of the leaders of GriefShare, addresses the group at one of the weekly gatherings at Brookdale Presbyterian Church. The free 13-week program can help people work through grief and is grounded in Scripture. 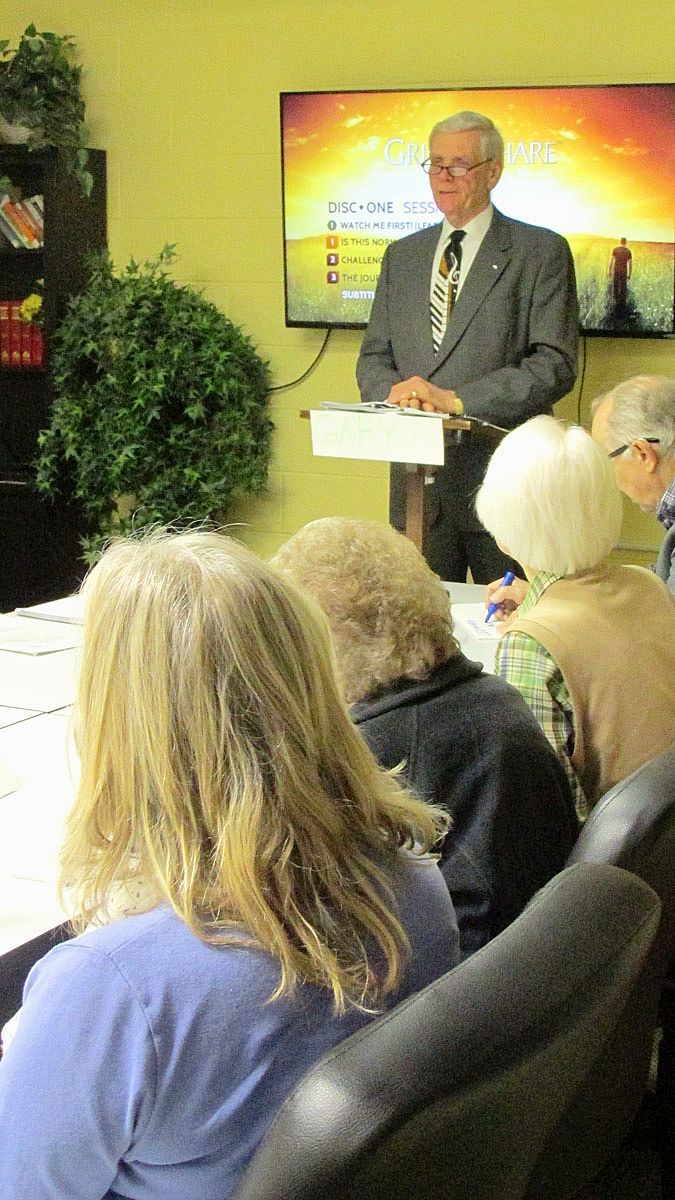 Each Griefshare, led by Don Weston and Gary Butler (pictured), includes a video, discussion and pages from a workbook. Their hope, Weston and Butler say, is to help people work through their grief after losing a loved one, no matter how long ago.

Debbie Harris, left, talks about her late husband, Bill, during a GriefShare gathering at Brookdale Presbyterian Church in mid-February. This will be the sixth year for the free 13-week classes to help those who are grieving.

Gary Butler, one of the leaders of GriefShare, addresses the group at one of the weekly gatherings at Brookdale Presbyterian Church. The free 13-week program can help people work through grief and is grounded in Scripture.

Each Griefshare, led by Don Weston and Gary Butler (pictured), includes a video, discussion and pages from a workbook. Their hope, Weston and Butler say, is to help people work through their grief after losing a loved one, no matter how long ago.

Everyone’s journey through grief after losing a loved one looks different, but it isn’t a journey that should be taken alone.

“It’s one of the most upsetting events you can have take place in your life,” says Gary Butler, one of the leaders of GriefShare at Brookdale Presbyterian Church. “A lot of people have it happen to them and they don’t do anything about it. They carry it with them for years and years and years.”

Butler and Don Weston, both members of Brookdale Presbyterian Church, run GriefShare, a free, 13-week grief recovery support program designed to help those who have lost a loved one walk through the grieving process with the support of others. The national program is based in North Carolina.

The program, which is based in Scripture, includes videos, discussions and a workbook, but “it isn’t like homework,” Butler says. They welcome anyone, whether the loss was experienced recently or decades ago.

“Somebody comes in here, they’ve got all these emotions built up. It doesn’t matter if it was six weeks ago or six years ago or 16 years ago. You’ve still got them and you haven’t gotten rid of them,” Butler says. “The difficult part is people lose someone in death and they don’t know what to do. There’s no book that says ‘OK, when your mother dies, you have to feel this way and then you need to go see a doctor.’”

During the sessions, there is talk about forming a new identify after a loss, Butler says.

“Who used to be a Mrs. — that changes. If they used to be a father or mother and the child has passed, their identity has changed. Getting used to that is key. It’s a gradual thing,” he says. “Two people can be sitting across from each other and may have both lost a spouse, but they won’t be the same. ... There’s no rhythm or reason to the timeline. It’s up to the individual.”

The key is to determine if someone is working through the grieving process no matter how long it may take, Weston says. The group can help people who are “stuck,” he says.

The most important part of the group, Butler says, is the relationships that are formed. Many people attend several of the cycles, which are held in the fall and spring.

Debbie Harris, who lost her husband, Bill, on Feb. 11, 2015, attended a GriefShare meeting in mid-February. He had fought lung and brain cancer for two years before he passed, Harris says.

“I just thought this isn’t something I could handle on my own,” Harris says. “I’ve had my dad die. I’ve had my mom’s mom die, my grandma. I’ve seen death as a nurse. But it’s different when it’s somebody you’ve been with for 27 years. It’s a whole different ball game. I just felt like I needed someone to help me through it.”

The support and relationships are what’s really important about GriefShare, Harris says.

“I’ve met people here and made friendships,” she says. “This is my third time here and I probably don’t need to come anymore, but I’ve got friends who I can see when I come so I do. ... You can call Don or Gary at any time. We are all just here for each other. I think that’s what makes it unique, that there are other people who have shared that experience.”

Some people are hesitant to attend GriefShare or choose not to return for an entire 13-week session, Butler says, and that’s OK.

“It’s fear, anxiety, pride,” he says. “They are afraid that they will get in here and they will break down and start crying and make a fool of themselves, in their eyes. When they get in here, (they) realize, everyone is going through the same thing.”

There is one question they don’t address, Weston says, and that’s “why.”

“You’d have to talk to someone with more power than we have to answer that,” Butler says.

The biggest reward, Weston says, is watching people make progress in their grief recovery and seeing the occasional smile. The program is supported by donations from the community and past participants, Brookdale Presbyterian Church and the AseraCare Foundation.

“The most rewarding part is just to see the change, to see them come in and look glum and they think they are supposed to look that way because they are going through grief,” Butler says, “But then we see them change, to smile.”

A cloudy and rainy weekend ahead in Saint Joseph and rain chances lingering into next week.