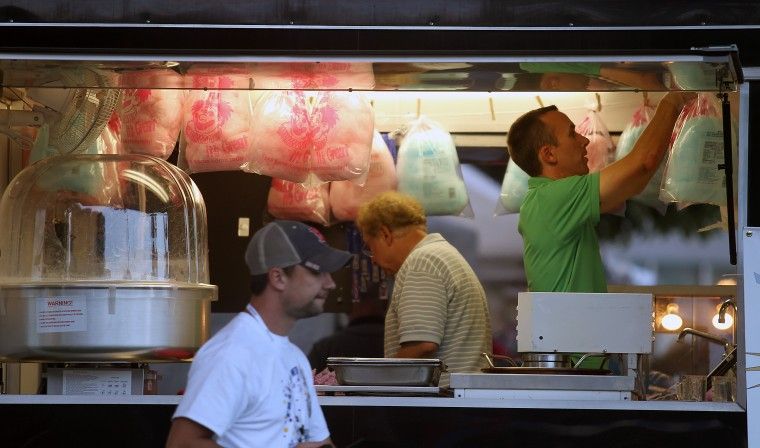 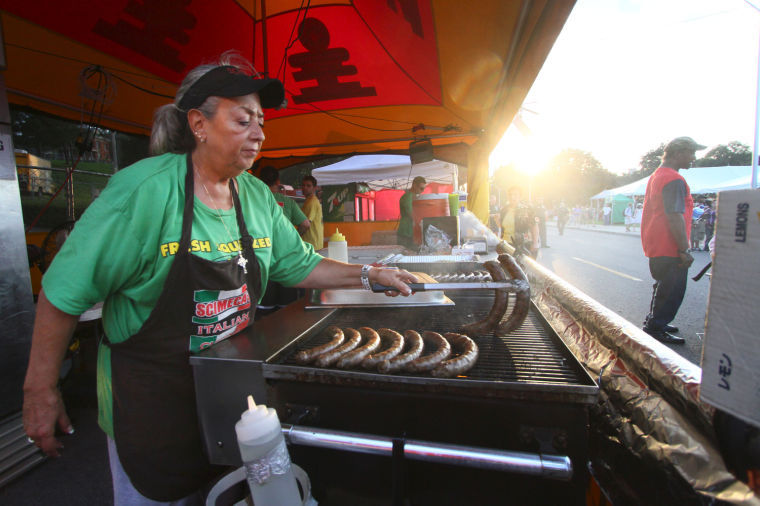 Annice Cherrito works an open grill in the Scimeca’s tent during the Trails West! festival Friday night at Civic Center Park in this August 2011 photo. 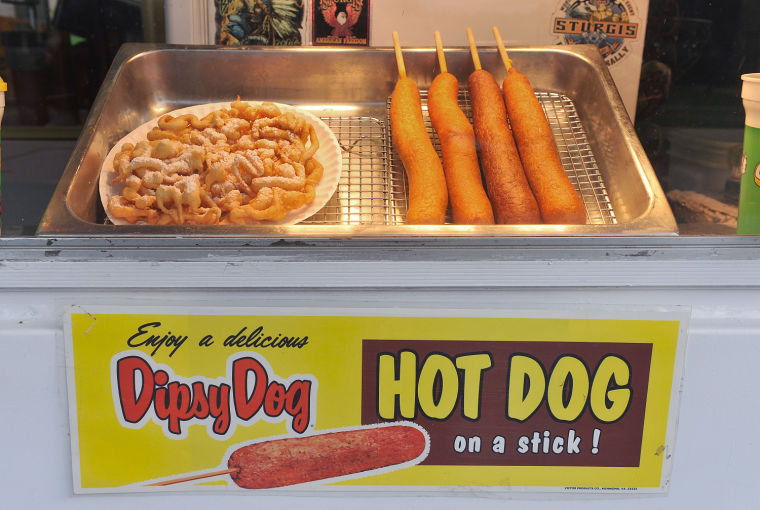 From corn dogs to funnel cakes, Trails West! is known for opportunities to sample unusual food. 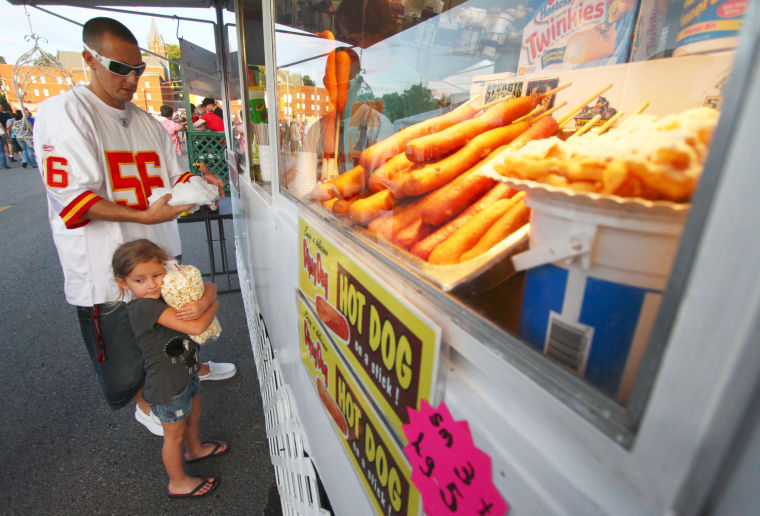 Dan Barr wraps his food up while Jaylee Blanton, 4, hugs her popcorn during the Trails West! festival at Civic Center Park in this August 2011 photo.

Annice Cherrito works an open grill in the Scimeca’s tent during the Trails West! festival Friday night at Civic Center Park in this August 2011 photo.

From corn dogs to funnel cakes, Trails West! is known for opportunities to sample unusual food.

Dan Barr wraps his food up while Jaylee Blanton, 4, hugs her popcorn during the Trails West! festival at Civic Center Park in this August 2011 photo.

Summer festivals offer a lot to look forward to. Great music, interesting art and socializing with friends are big draws for eager crowds. But arguably one of the best parts is the food.

This year’s Trails West! festival, happening Aug. 15 to 17 in Civic Center Park, will feature more food vendors than there have been in several years, says festival co-chair Jeremy White. Along with favorites such as Keck’s Longhorn Root Beer and Ma & Pa Kettle Korn, many new vendors will join the delicious lineup.

“We think that Trails West! this year is just going to be a great thing. There seems to be some buzz about it this year, and certainly food is one part of that,” Mr. White says.

New vendor Justin Burns, from Cameron, Mo., will roll in with his 1,000-gallon smoker for Blazing Burns BBQ. He and his wife used to park their food truck on the Belt Highway before raising enough money to open a restaurant in Cameron. The tough winter made them reassess their business plan, so he says they decided to focus on going mobile.

“You’ve just got to start one step at a time. ... We thought (Trails West!) was a good opportunity to grow, another notch in our belt,” Mr. Burns says.

After finding success at stints like the Cameron Air Show, which racked in 40,000 visitors in three days, he says he’s excited to travel to other events and festivals to share his hickory-smoked specials like pulled pork and brisket sandwiches, smoked sausage and baby back ribs.

“This is not our first festival, but it’s definitely one we’re most looking forward to,” he says.

The big orange Pepos Taco Truck also is new to Trails West!. Offering authentic Mexican fare like tacos al pastor and alambres, this truck already is a local favorite. Don’t miss your chance for a spot in their line.

Those looking for something meatier can try Dry Creek Buffalo Co., another festival newcomer. It specializes in entrees like burgers and nachos made from grass-fed, hormone-free buffalo raised near Wamego, Kan. Co-owner Joanne Rolph says while buffalo doesn’t taste exactly like beef, people always are surprised at how good it is.

“A lot of people have a misunderstanding that it’s very, very dry, and it’s really not. It does taste different than beef, it has a richer flavor. ... Buffalo is the original red meat,” she says.

Perhaps the most exciting food announcement for this year’s Trails West! is about its payment system. Festival goers won’t have to wait in long food ticket lines anymore, because the ticket system will no longer be in place. Each individual vendor will once again accept cash (and credit or debit, depending on the vendor).

Mr. White says doing away with food tickets has been in the works for quite some time, and the organizers are pleased that they reached an agreement that works well for the vendors, the consumers and Allied Arts. Having attended Trails West! as a patron in the past, he understands the frustrations of standing in an extra line just to get food.

“I thought, ‘Man, if we could eliminate some of (the lines), that would be wonderful,’” he says. “... The public loves the idea of no tickets, obviously. The other thing is we have more vendors this year than we’ve had in years past. Vendors at other festivals, they’re more inclined to come to Trails West! now because we don’t have the ticketing system.”

Trails West.....kudos to you for making some changes this year. Free entry between 10:30 and 2 on Sunday, food tickets, worship, addition of vendors of all kinds. Great job.

Wow, another year has past. I'm looking forward to another great weekend of fun, food, entertainment and seeing people I don't see very often through the year. Thanks Trails West! You have put on great festivals now for over 20 years uniting the city for a weekend to just relax.

It always marks the end of summer and the beginning of school the next week. We have lots of memories of good times! See you there.