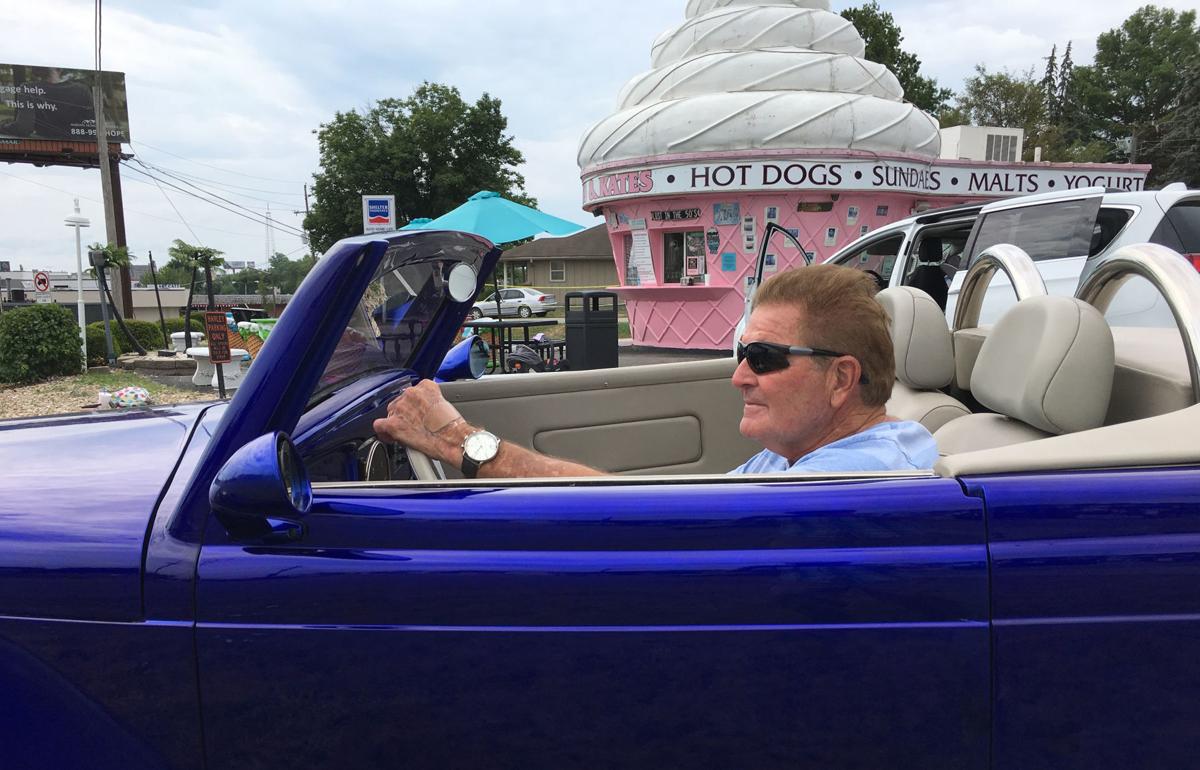 Gary Power, one of the founders of Kris & Kates, drives out of the parking lot. For the restaurant’s 20th anniversary, a car-and-motorcycle show will be held in September, along with a number of other activities geared toward families. 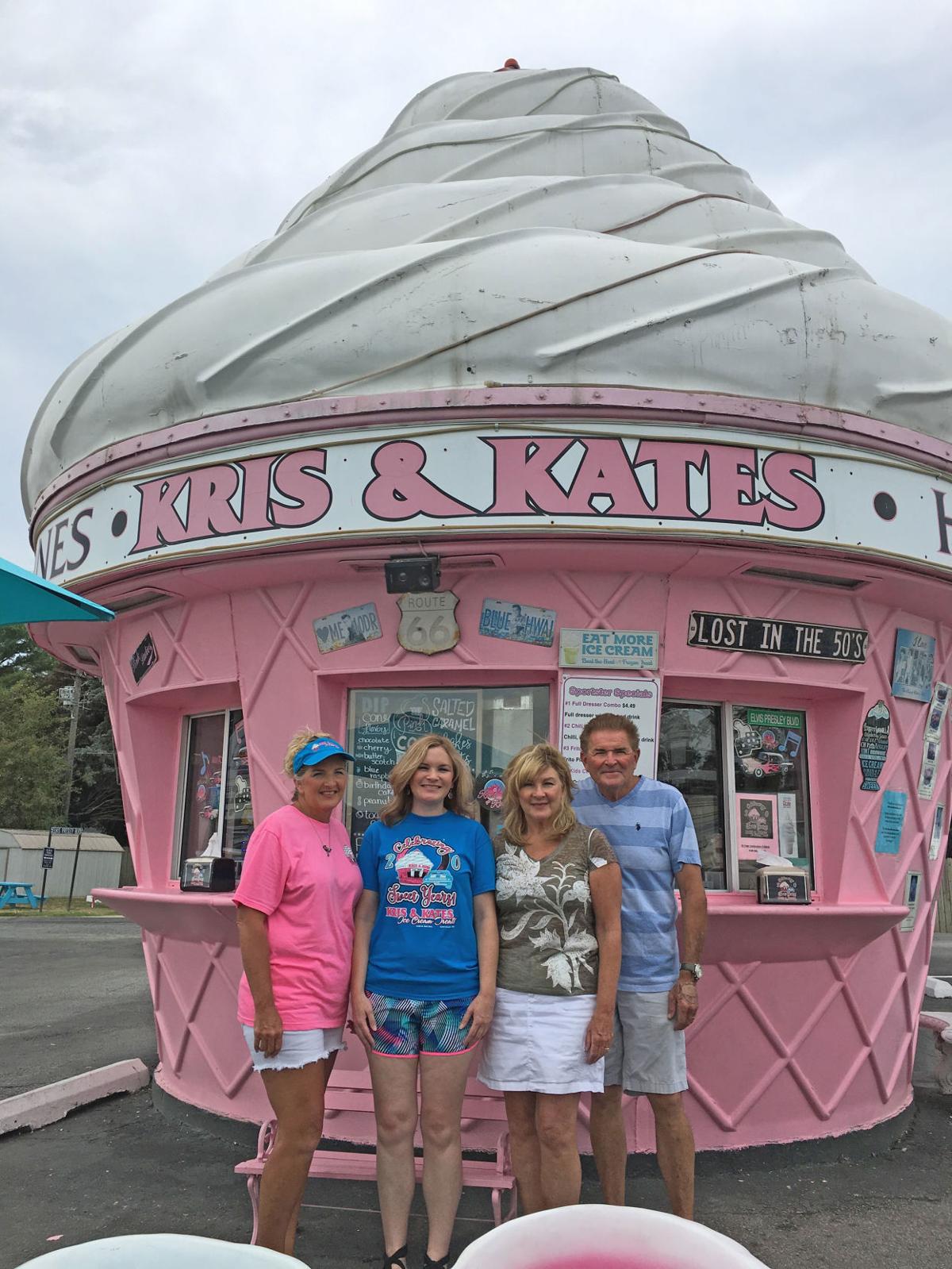 Kris Garrison, Katie Power, Dianna Power and Gary Power stand in front of the family restaurant, Kris & Kates. Gary and Dianna purchased it in 1997, and the restaurant will celebrate 20 years in operation this September.

Gary Power, one of the founders of Kris & Kates, drives out of the parking lot. For the restaurant’s 20th anniversary, a car-and-motorcycle show will be held in September, along with a number of other activities geared toward families.

Kris Garrison, Katie Power, Dianna Power and Gary Power stand in front of the family restaurant, Kris & Kates. Gary and Dianna purchased it in 1997, and the restaurant will celebrate 20 years in operation this September.

Sisters Kris Garrison and Katie Power gathered their families around Kris & Kates, the ice-cream-shaped restaurant that shares their names, taking pictures and providing ice cream to the children, before Katie tilted her head to the side, listening to the ’50s music that was playing on the speakers.

“Same music,” she laughs. “That hasn’t changed. You’d think by now the tracks would skip.”

Kris and Kates, located at 2330 N. 36th St., is hard to miss. The giant pink-and-white ice-cream cone sits right off the Belt Highway.

“We’ve got it in the name,” Kris says, referencing the sign in front of the restaurant. “Everybody knows when we say, ‘Meet me at the cone.’”

Originally called Twisty Treat, the restaurant was purchased Gary and Dianna Power, who gave ownership to their children, Kris and Kate.

“Since I was in sixth grade, my dad always talked about how we would have an ice cream store, and it actually came true in November of 1997,” Katie says. “I was a sophomore at Missouri Western and he handed me the key and said, ‘I just bought Twisty Treat up the street,’ and I remember coming here and it was all pink already, and he had actually already named it Kris & Kates.”

From there, the two established a ’50s and ’60s theme, featuring pictures of Elvis Presley, old signs with era-appropriate vehicles as well as the aforementioned music that plays over the restaurant’s loudspeakers.

Car and motorcycle shows were held in the first few years that the restaurant was open, and the staff at Kris & Kates even represented this theme in the Apple Blossom Parade two years after opening their doors.

“Our dad purchased an Elvis Cadillac back in the day,” Katie says. “In ’98, we were in the car show, and in 2000 he (dressed up as) Elvis, and we actually did the ‘Grease’ float — (the theme) was Rocking Through the Decades — and we actually won the grand prize for 2000 Apple Blossom Parade.”

But maintaining a family-friendly environment is also a top priority at Kris & Kates, from producing a volleyball court to a small playhouse and sandbox for children to play in while they wait for their food.

In ’98, the menu began with Kris & Kate’s Favorites, two items that still are featured prominently at the top of the restaurant’s menu. For Kris, the Old Fashioned Soda (a carbonated shake with a fruit topping) is the undeniable favorite, and for Katie, it’s the “Twistin’” Turtle Sundae (a sundae with hot fudge, caramel, pecans, whipped cream and a cherry), though she prefers it with a brownie nowadays.

And that’s one of the best aspects of the menu, Kris says. While it has changed to incorporate chili dogs, Frito pie, chili-cheese nachos, and a variety of other foods, yogurts and even gluten-free treats, the menu itself is merely a recommendation, because as long as customers see the ingredients, there’s a good chance the staff at Kris and Kates can make it.

“You think it, we can make it,” Kris says with a smile.

“You can make anything off the menu,” she says. “I know that some other places don’t do that, but if we have the topping, we can blend it, add it to a sundae, whatever you want. As long as you see that item (on the menu), you can mix and match.”

The community of St. Joseph has even influenced items on the menu. The Cake Batter Mania, for instance, made up of vanilla ice cream, cake batter, maraschino cherries, cookie dough and pecans, was thought up by a customer who ordered it every time she stopped by. Management liked it so much that it was added to the menu.

The Oreo volcano as well as the cookie-dough topping are very popular, Kris says, and gluten-free almond milk coupled with pineapple, strawberry, orange and eventually lime Dole whip ensures that everyone can find something they love at Kris & Kates.

On Sept. 29, the restaurant will celebrate 20 years in business with a car-and-motorcycle show. Activities such as an ice-cream-eating contest and a hula hoop competition will be held, and even “Elvis Presley” will make an appearance, the sisters say before looking at their father.

“Oh, he retired that costume,” Katie laughs. “We have a younger version this year.”

The restaurant is open from March through October, and is currently operating in summer hours, from 11 a.m. to 10 p.m. from Sunday to Thursday, and 11 a.m. to 10:30 p.m. on Friday and Saturday.