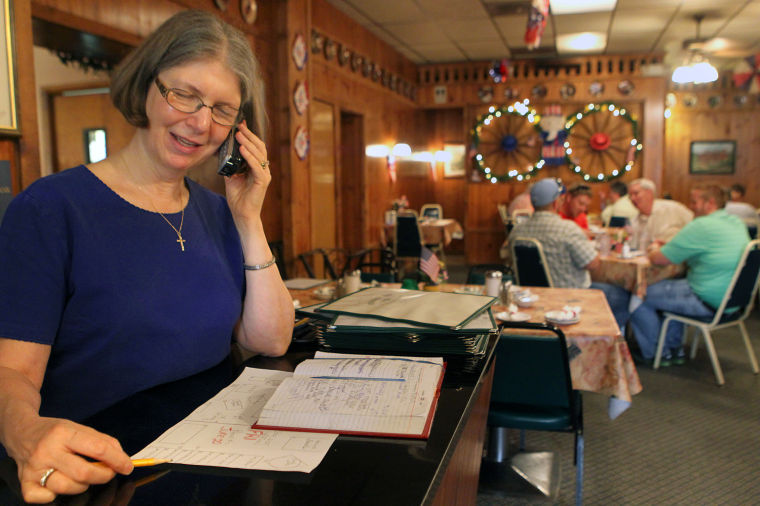 Karen Evans, owner of Fredrick Inn, takes a reservation. She and her husband, Fred, opened the restaurant in 1980. Fred died in 1992. 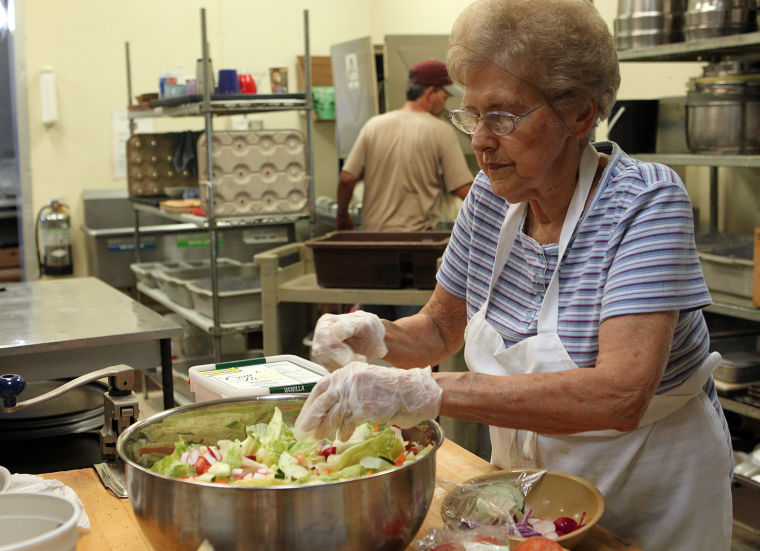 Rosie Miller, Karen Evans' mother, works at the restaurant three days a week. Ms. Miller is the former owner of The Hoof and Horn Steakhouse. 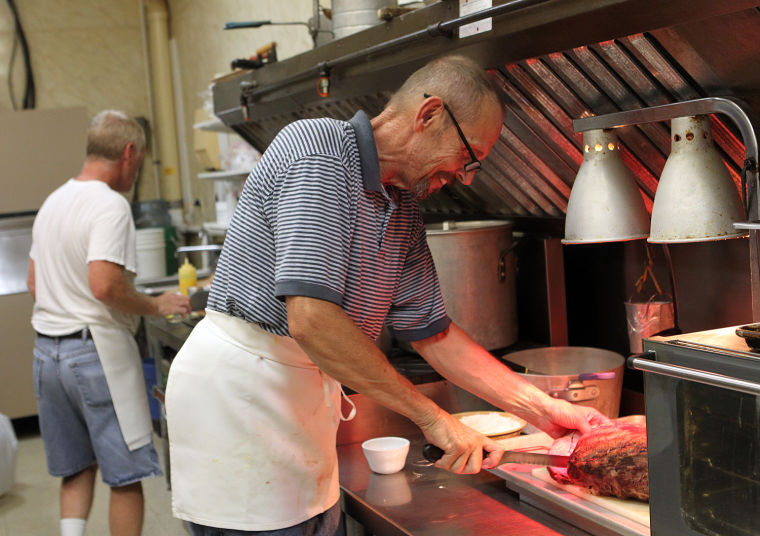 Rick Miller, Karen Evans' brother, also works at Fredrick Inn. He says he's worked there for 20 of the 34 years it's been in business.

Karen Evans, owner of Fredrick Inn, takes a reservation. She and her husband, Fred, opened the restaurant in 1980. Fred died in 1992.

Rosie Miller, Karen Evans' mother, works at the restaurant three days a week. Ms. Miller is the former owner of The Hoof and Horn Steakhouse.

Rick Miller, Karen Evans' brother, also works at Fredrick Inn. He says he's worked there for 20 of the 34 years it's been in business.

It's not spelled wrong, it's just different.

That’s the response owner Karen Evans gives whenever a customer asks about the spelling of Fredrick Inn Steakhouse. The restaurant has been a fixture at 1627 Frederick Ave. for 34 years, but the twinkling sign beckoning patrons inside often causes confusion. However, it’s spelled that way on purpose.

“(My husband) went by Fred. It was William Fredrick but he went by Fred. ... And at the time we opened, my brother Rick was here too, so Fred, Rick,” Ms. Evans says. “Plus everybody was always saying we spelled it wrong, and I said, ‘Well, that gets people talking about us!’”

Ms. Evans grew up in the restaurant business. Her parents were the former owners of The Hoof and Horn Steakhouse, and she worked there for years before setting out on her own. When the owner of the old Carriage House restaurant on Frederick wanted to sell the building, she and her husband jumped at the opportunity.

“My first husband always wanted his own business, and so when this opportunity arose, he thought that would be kind of a natural fit because of my background,” she says.

Fredrick Inn opened in 1980 and has endured the ebb and flow of a changing city ever since. Her husband died in 1992, but Ms. Evans continued running the restaurant with help from her family and longtime staff. Her mother and brother still work there a few days a week. Today, Fredrick Inn serves as an example that great food and a friendly environment are all it takes to keep people coming in the door.

The restaurant’s most popular specialties are the juicy prime rib and hand-cut steaks, but its other claims to fame include a well-stocked salad bar, fresh cinnamon rolls in the bread basket and rotating lunch specials.

“Our lunches are homemade, and you don’t get a lot of homemade places anymore either, where they make it from scratch,” Ms. Evans says.

You also don’t see many places with handwritten lunch menu fronts. Each day she writes up the daily specials, including selections of homemade pies and cobblers, and places copies inside every menu. This small detail, though subtle, reminds customers of the restaurant’s commitment to simplicity and quality.

Besides its dedicated staff members, some of whom have worked there 15 years or more, Fredrick Inn has its loyal customers to thank for helping it remain one of St. Joseph’s most well-known institutions. Ms. Evans says many patrons come in at the same time each week and sit in the same spot. Although the clientele is a bit older, she does see more young people coming in for the first time. This is partly due to more restaurants and businesses returning to the Downtown area.

“There’s getting to be a lot more events Downtown so I think that’s kind of helped get people to this area. ... This last year and a half, they’ve really been kind of pushing for that,” she says.

When il Lazzarone opened in May, for instance, Ms. Evans and her family didn’t see it as competition to fear, but rather an opportunity to attract more people across the street.

“Our business is up probably 10 percent (since il Lazzarone opened). ... He sells one item and we sell everything else, I like those odds,” Ms. Evans’ current husband, Jeff Evans, says with a laugh.

“I always ask people, ‘Where have you heard of us?’ and they say at their hotel. ... They say, ‘We wanted a hometown restaurant instead of going to a chain,’” Ms. Barnes says.

Fredrick Inn is open 11 a.m. to 9 p.m. Monday through Thursday, 11 a.m. to 10 p.m. Friday and 4 to 10 p.m. Saturday. It’s closed Sundays and major holidays. The restaurant will return to regular hours after being closed June 30 through July 6 for vacation.

Eating Unchained is a new food series featuring locally owned, non-chain restaurants. On the fourth Wednesday of each month, we will focus on businesses, from newcomers to established classics, that are an integral part of the city's thriving food scene. Rediscover what it's like to dine at some of St. Joe's finest.

A cool change for only one day!