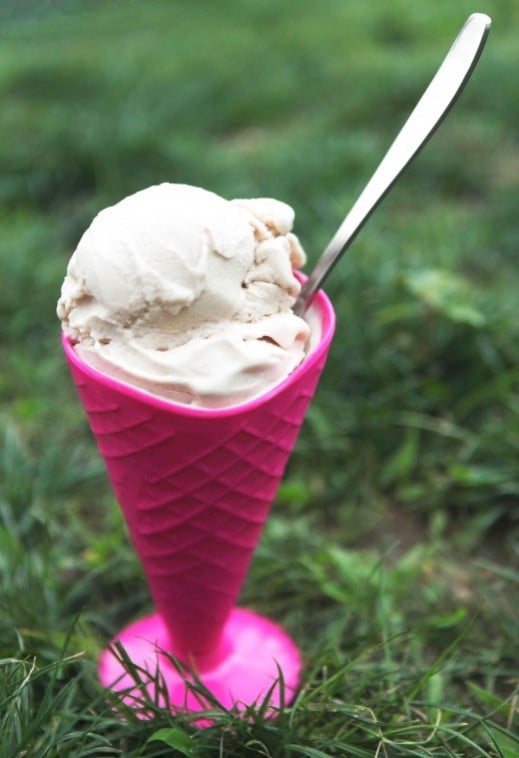 This salted caramel ice cream is made from two cans of coconut milk, 3/4 cup sugar, 1 tablespoon vanilla, 2 teaspoons caramel extract (like Watkins) and 1 teaspoon sea salt, then prepared in an ice cream maker according to manufacturer's directions. 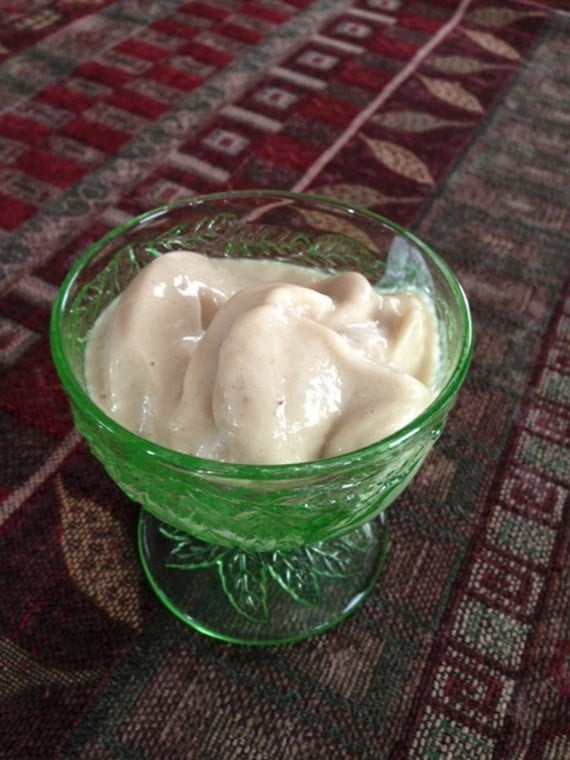 This simple vegan 'ice cream' is made with two frozen ripe bananas and one teaspoon organic vanilla, blended in a high-speed blender. 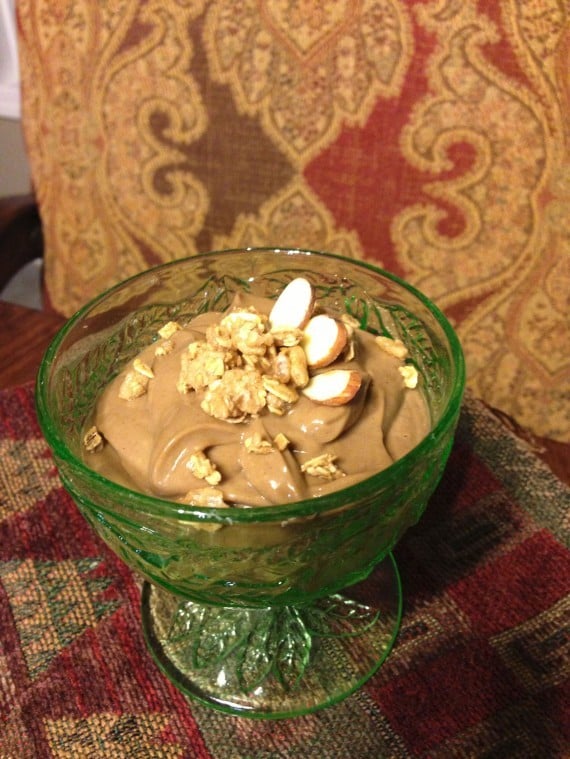 This chocolate pudding made from avocados can be frozen and used as a substitute for chocolate ice cream.

This salted caramel ice cream is made from two cans of coconut milk, 3/4 cup sugar, 1 tablespoon vanilla, 2 teaspoons caramel extract (like Watkins) and 1 teaspoon sea salt, then prepared in an ice cream maker according to manufacturer's directions.

This simple vegan 'ice cream' is made with two frozen ripe bananas and one teaspoon organic vanilla, blended in a high-speed blender.

This chocolate pudding made from avocados can be frozen and used as a substitute for chocolate ice cream.

One of the best parts about summer is the ability to eat certain foods in much higher volumes than the rest of the year and no one bats an eye. One of those foods is ice cream.

Unfortunately for vegans or people with dairy allergies, forgoing this sweet treat can be frustrating, especially when they have to settle for a boring fruit pop while everyone else indulges. A growing upswing in the number of vegan tips and recipes available online and in cookbooks now makes it possible to create ice cream variations that everyone can enjoy.

Area resident Dianne Koelzer decided to make a lifestyle change a year ago after battling chronic muscle pain for much of her adult life. After watching the documentary “Forks Over Knives” and doing some research, she stopped eating all meat and dairy and adopted a vegan diet in hopes that it would ease some of her problems.

“(The film) revealed things to me that I had no clue about, like concerning a lot of what I was eating was causing a lot of my pain issues,” she says.

She created a Facebook page, Luv My Crazy Vegan Life, to share recipes and tell her story. She began to notice almost immediately that her body was improving, which she largely attributes to cutting dairy products out of her diet.

“I was drinking a pretty considerable amount of milk but a lot of it was cheese products too. ... You just don’t realize how much milk and cheese you consume,” she says.

Giving up dairy didn’t mean she had to give up some of her favorite desserts, though. She quickly found out that the easiest way to create faux-ice cream was by using one surprising ingredient: bananas.

“You get ripe bananas, like if you want a single serving, it’s two ripe bananas that you pop in the freezer, then throw them in a high speed blender,” Ms. Koelzer says, noting that regular light-duty blenders will struggle with frozen fruit.

The result is a smooth, sweet, creamy dessert that does a good job of posing as ice cream. She says the riper the bananas are, the sweeter they are, and the natural sugars mask the banana taste. You also can add ingredients like vanilla, peanut butter or espresso powder to change the ice cream flavor.

“There’s just so many variations and it starts with two frozen bananas,” she says.

Another recipe Ms. Koelzer has tried is a chocolate pudding made from cocoa powder and avocados. Again, she says the avocado flavor is almost undetectable. Once prepared, the pudding can be frozen so that it resembles chocolate ice cream.

Sandi Bruegger is a mother of five and food blogger from the St. Louis area. Her whole family eats a vegan, dairy-free, gluten-free diet due to her children’s food allergies. She and her husband also wanted to lose weight and lower their cholesterol, and they were heavily influenced by “Forks Over Knives” just like Ms. Koelzer.

“Two cans make a whole ice cream maker bowl full of deliciousness and it’s low in calories and low in fat,” she writes in an e-mail interview.

She says she likes keeping natural extracts around the house, not only to flavor the ice cream different ways but to use in her other recipes. Many can be found on her blog, sweetnothingsinthekitchen.blogspot.com.

”So far, for ice cream, my favorite is a Watkins caramel extract. By adding a little sea salt to the mix, it makes the most decadent salted caramel ice cream,” she says.

Ms. Bruegger thinks coconut milk-based ice cream is sometimes creamier than regular ice cream, so even non-vegans would love it. Since the ingredients are simple and all-natural, she says it’s also beneficial that there aren’t any weird preservatives or additives in the mix.

”The key is to refrigerate the mix before you put it in the machine. The colder you can get your liquid ingredients before freezing, the less crystallization occurs and the creamier the final result. Creaminess is all about fat, so whether it’s plant or animal based doesn’t really matter,” she says.

Find 29 ice cream recipes like the ones above, as well as others using soy or almond milk bases, in this Buzzfeed Food article: http://www.buzzfeed.com/rachelysanders/amazing-vegan-ice-cream-recipes.

For vegans who aren’t keen on making their own ice cream, many stores now carry alternatives in the freezer section. Check out brands like So Delicious and Tofutti, and non-dairy milks like Silk and Almond Breeze. The availability of more vegan and dairy-free grocery products makes it much easier for people with all kinds of dietary restrictions to enjoy the foods they love.