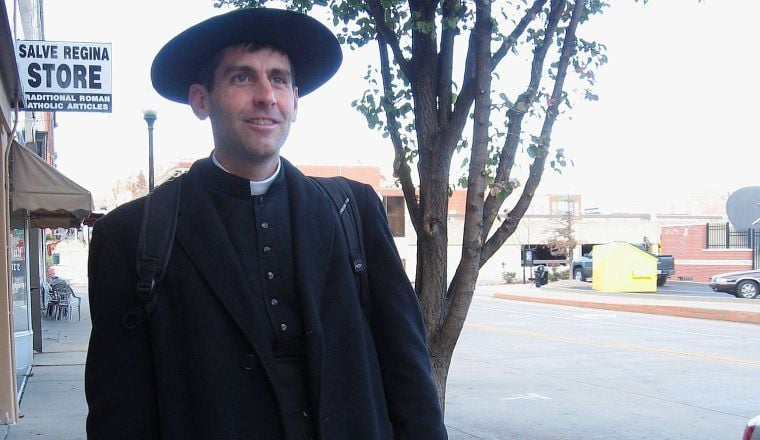 The Rev. Lawrence Carney is a Catholic priest who felt called to walk the streets of St. Joseph praying and helping others pray. 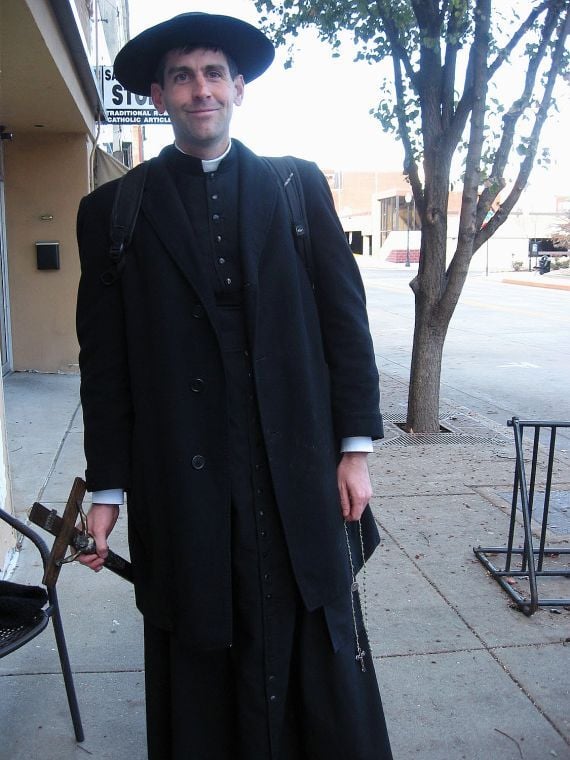 The Reverend Lawrence Carney walks the streets of St. Joseph with a crucifix and Rosary. He felt called to pray and help those he meets pray.

The Rev. Lawrence Carney is a Catholic priest who felt called to walk the streets of St. Joseph praying and helping others pray.

The Reverend Lawrence Carney walks the streets of St. Joseph with a crucifix and Rosary. He felt called to pray and help those he meets pray.

Most afternoons, the Rev. Lawrence Carney can be found walking around St. Joseph. Dressed in black, carrying a crucifix and rosary, he can be hard to miss.

“The name of St. Joseph being one of the three of the Holy Family, a nun and I thought this would be a good town to allow me to walk around and pray,” the Rev. Carney says. “I think God has lots of ideas in mind for this idea of walking around and being a visible sign of the church, as kind of a missionary.”

The Rev. Carney moved to St. Joseph from Wichita, Kan., in January, where he had served as a pastor with the Diocese of Wichita.

“I was invited by the Benedictines of Mary, Queen of Apostles to be their chaplain,” the Rev. Carney says. “From there, I asked if I could live in a city and pray the rosary around the town and meet people along the way. If they wanted to talk about God, I would help them.”

The Rev. Carney spends part of his day with the nuns of Benedictines of Mary, Queen of Apostles in Gower, Mo., saying Mass and praying. Afterward, he returns to St. Joseph to walk, pray and attend Mass at St. Patrick’s Church, where he is staying.

“Our Lord walked so much. So did the Apostles. ... We remember a lot of things in the Bible from walking, where, carrying the cross, the Lord was walking,” the Rev. Carney says.

Much of his inspiration to walk and pray came from the Camino, a pilgrimage made by St. James from the Holy Land to Santiago de Compostela in northern Spain. Many people, including the Rev. Carney, have made the pilgrimage over thousands of years.

“I walked for 35 days, and I slept on the earth with a friend, on the ground, just like our Lord did,” the Rev. Carney says. “Along the way, many people opened themselves up to wanting to learn more about God and Jesus. When I came here, I thought about walking some more.”

While he walks in St. Joseph, the Rev. Carney prays the rosary and talks to people he meets.

“A lot of time, people want me to pray for them, for their general intentions, sicknesses or conversion. And then I teach them how to pray,” he says. “They ask about God and Jesus and Mary.”

He doesn’t have a set route, but he enjoys visiting the soup kitchen and listening to people. While he walks, he carries a crucifix in his right hand and a rosary in his left, an act he calls “fishing.”

“One guy came up to me and said, ‘What are you doing?’ I said, ‘I’m fishing. The crucifix is my hook, my rosary is my line. Allow me to put the rosary around your neck.’ He allowed me, and I said, ‘You’ve just been caught by Jesus,’” the Rev. Carney says.

Later, he saw the man again while walking.

“A month later, I walked by, and there was like 20 kids and they all wanted to ask me, talk about questions of God. This young man just runs out of his house and says, ‘Father Carney, I want a rosary.’ I gave him a rosary. I blessed it and taught him how to pray it,” he says.

The rosary consists of a series of prayers, including the Hail Mary, which are the words of St. Gabriel appearing to Mary to reveal redemption, the Rev. Carney says. When Adam and Eve were kicked out of paradise, God “didn’t owe us anything, but he decided to give us mercy,” the Rev. Carney says.

“When we say those words, we are really being pleasing to God because we are repeating His mercy to us,” he says. “When I say things like that, people understand the rosary in a way that they never have before.”

When he is on the streets, he welcomes anyone who may want to speak with him.

“There are people who are too afraid to step foot in a church, so if I just come out on the streets and pray, I won’t go knocking on people’s doors or preaching in the street, I’ll just pray,” he says. “I pray that good hearts come to me, and if people come to me with a good heart, I try my best to tell them the truth of Jesus because Jesus said the truth will set you free.”

He wears a sacramental black robe, called a cassock, which represents the tunic the priests wore in the Old Testament. He also wears an Italian hat called a saturno, which means “half a Saturn.” It helps keep the sun out of his eyes and protect his face from sun damage.

“We stick to tradition. This hat was required by all clerics who lived in Rome. It was against the law not to wear one until several decades ago. It’s very fitting to the priesthood because it’s what we used to wear all the time,” he says.

The Rev. Carney believes that, through praying and praying with others, he is able to help people achieve their purpose in life — for the soul and body to be united with God.

He is excited to wake up each morning to be able pray and share prayer with people in St. Joseph, the Rev. Carney says. He plans on staying in the community until God calls him elsewhere.

“When I get to walk the streets, I get to practice my union with God. ... It’s fine to be interrupted by people to help them find that kind of peace and that union,” he says. “That’s why I was born. That’s why I was ordained to be a priest — to pray and to teach others to pray.”

Jena Sauber can be reached

God is giving many messages that are not always direct and if you have faith, you should pay attention to everything that is happening around you in order to feel its presence. You can also use some bible verse wall decals in your kitchen or office in order to remind you that God is with you and it is always helpful with those in need.

I'm quite familiar with the "charity" of the Catholic Cult; proselytizing the needy in their most vulnerable moments while ignoring reason, such as condoms, the empowerment of women, and long term education. The Church has done much more harm than good- facilitating abuse, covering up abuse, lying to children, and ultimately abusing it's power for temporal gain. I thank you for your concern about my research, Shan, I would implore you to apply that same critique to yourself.

Seriously, this is news? Let's reflect- if the Catholic Church just here in town opened their coffers to the needy, our homeless problem would immediately disappear.

If you want to talk about eternity have the guts to back it up in this life with actual assistance.

How amazing that you speak on something you have no clue about for the whole world to see. The Catholic Church is the largest charitable organization in the world - doing more to help the poor, the sick, the needy, the homeless, the marginalized than any other charity in the world. In the future, you should actually do some research before posting such inane and uneducated comments. Quit spewing such nonsense - it's tiresome.

Christmas through the years

Plattsburg native achieves dream of being a Rockette

With thanks to Mr. Ripley