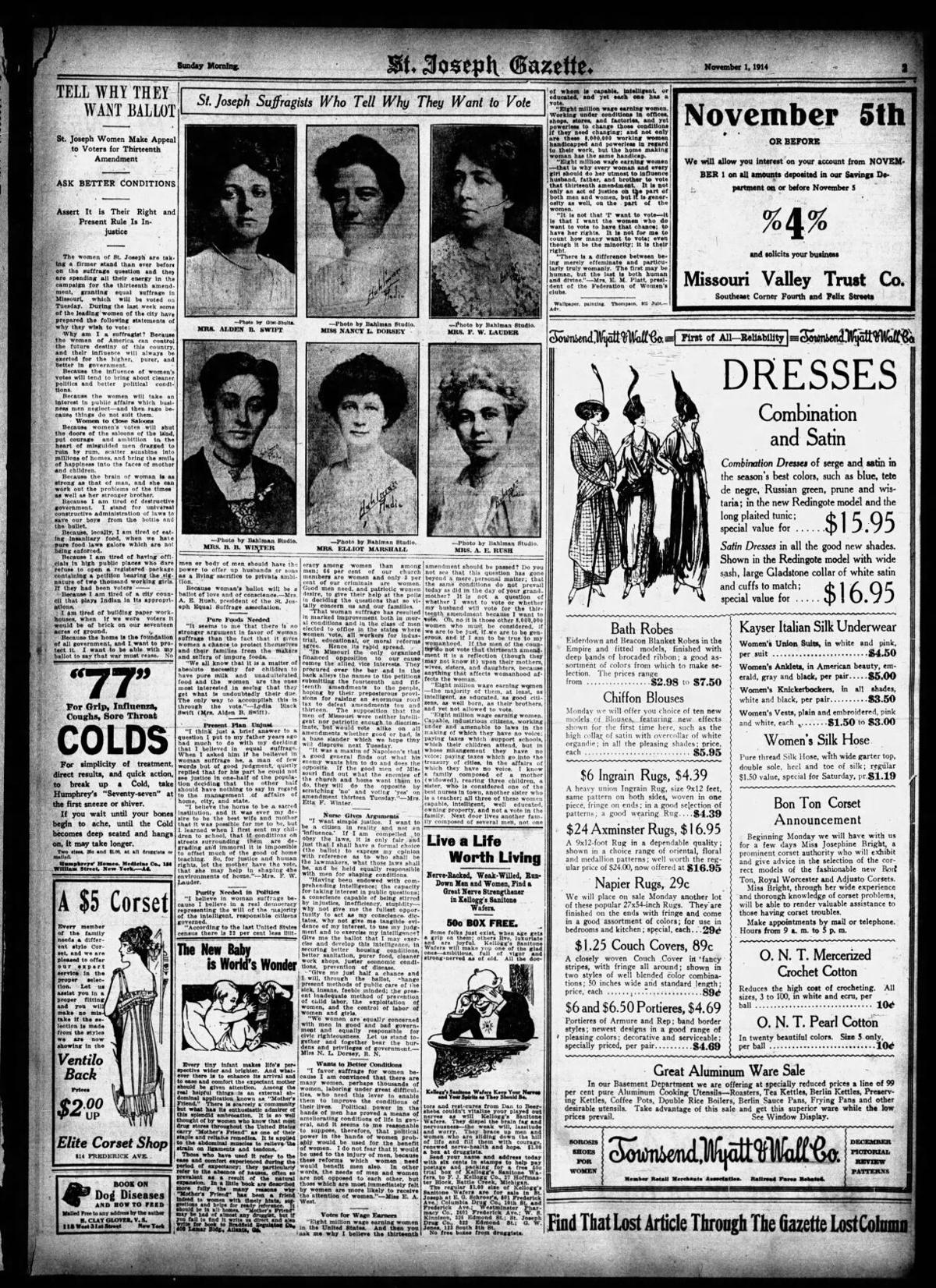 Right now, women are making decisions about local, state and presidential elections. Several St. Joseph women helped us get here. As we mark the 100th anniversary of the 19th Amendment, their grit, perseverance and determination are remembered.

One woman who left her mark on

St. Joseph voting “herstory” is Nancy Dorsey. She came to St. Joseph around 1910 as the head nurse and educator for the Buchanan County Society for the Prevention and Relief of Tuberculosis (Anti-Tuberculosis Society for short).

“She was extremely independent her entire life and a fierce advocate on the behalf of women,” said Jennifer Sanders-Tutt, local history librarian at the St. Joseph Public Library. “She was not afraid to take on anything, whether it was disease or a city government composed of men. She advocated for reform in all aspects of health care, especially for those experiencing poverty, and moreover women experiencing poverty.”

Sanders-Tutt said this led to Dorsey butting heads with the mayor and city government. She was on the Social Welfare Board until late 1914, but the mayor chose not to reappoint her, despite the board’s sitting members’ requesting him to do so.

After she was not reappointed to the Social Welfare Board, she left St. Joseph to do other things, much to the community’s lament.

“Nancy Dorsey wanted equal citizenship and the rights that went along with it for women,” Sanders-Tutt said. “I think a lot of her advocacy and outspokenness came from the fact that she was very competent and capable at what she did and that was many times a job that men were unwilling to do.”

Elizabeth Platt was an expert at public relations for women’s suffrage in St. Joseph.

“This was a time when many women were going up against struggle after struggle to just have their voices heard,” Sanders-Tutt said. “She was really fantastic in the way she crafted the image that was put out there for the public.”

In 1916 when the “Suffrage Special,” a railroad car of nationally known female speakers (including Lucy Burns, who served more time in prison than any other American woman suffragist, according to the National Parks Service), came through town, there was a rift between women’s suffrage organizations on the national and state levels.

When the Missouri Equal Suffrage Association found out that The Suffrage Special was supposed to stop in St. Joseph, they wrote to Della Rush, who was head of the local chapter at the time, and told her not to give the women a reception of any kind.

At this same time, Elizabeth Platt was head of the Federation of Women’s Clubs, and they didn’t really take a political stance.

“Platt ever the suffragist, states that it would be dreadful if no one received the Suff Special, and she’s quoted saying this in the newspapers,” Sanders-Tutt said.

This perhaps influenced a group of businessmen who offered to cover any and all expenses to receive the Suff Special. The women were met by 10 cars at the St. Joseph Union Station, treated to dinner at the Hotel Robidoux followed by an informal meeting at the Scottish Rite Cathedral. The mayor at the time, Elliott Marshall, who had already been openly supportive of suffrage, also attended, Sanders-Tutt said.

“Elizabeth Platt was masterful at PR,” the librarian added. “She organized all of that, which was a big statement in the public eye, all while not officially being able to take a stance on it.”

Rush (who wanted to ignore the nationally known suffragists’ visit) was outspoken when she knew it would have the greatest impact, however.

One of those moments was the Preparedness Day Parade in 1916. Like similar parades around the country, it was held to show support for the United States’ entry into World War I. And even though many suffragists were against war, the parade would be a large public display of women’s ability to organize and show their numbers. Rush knew how important participation would be for the suffrage movement.

“It was the first major event that I found that the women (in St. Joseph) were making a statement in gathering as suffragists,” Sanders-Tutt said.

It was a long route, though, and Rush heard that some women didn’t want to march.

Rush was quoted as saying, “I have heard some women say that it would be too hard to walk so far tomorrow. It may be that you women will be called upon to suffer much greater hardship and sacrifices than to walk a few blocks in support of the cause of national preparedness. Every woman here should be in the parade. You are all urged to form in the women’s division at 2 o’clock tomorrow afternoon at Fourth and Francis streets.”

“St. Joseph was a prominent town at this time, and so (Rush) was also aware that our parade would receive national coverage,” Sanders-Tutt said. “Having suffragists play an active role in that was crucial.”

While white women struggled, voting was even harder for women of color in St. Joseph and around the U.S. For years to come after the 19th Amendment passed, many women of color faced poll taxes, literacy tests, fears for their safety or ridicule and other discriminatory practices when trying to exercise their civic duty.

“Part of the harsh reality of the 19th Amendment was the lack of inclusion and intersectionality,” Sanders-Tutt explained. “Many women resented the fact that African-American men received the right to vote before they did.”

Unfortunately, the names of individual local black women suffragists appear to be left out of documents from the time.

“Black women often were excluded or their stories didn’t always get told,” said Loes Hedge, a hobby historian and St. Joseph Black Archives committee member. “They were the last to be granted any dignity.”

Though she was not able to find mention of specific black St. Joseph suffragists in her research, Hannibal, Missouri’s, Harriet Hampton stands out. She’s thought to be the first Black woman to vote in Missouri following the passage of the 19th Amendment during the Aug. 31, 1920, Hannibal City Council special election.

Another notable figure from Missouri is Victoria Clay Haley Roland, a member of the Mississippi Valley Equal Suffrage Conference (which was composed largely of white women at the time). Newspaper clippings Hedge found promoted Roland and her lecture, “The Emancipation of Woman.” Roland was asked to leave a suffrage conference because she was Black, according to the National Organization for Women (NOW). She refused to do so. The St. Louis native, who was elected to represent her district in the Women’s Auxiliary of the Republican State Committee, also was a teacher and attended law school.

Kelsey Beshears came of age during the women’s suffrage movement and undoubtedly this influenced her work in St. Joseph when she moved to the city in 1946, Hedge said. She soon became involved in civil rights activities and was elected as a delegate to a Democratic National Convention.

“She met several people who would’ve been in the movement then,” Hedge said.

Beshears served as counselor on affirmative action for several local companies and developed the Brookdale East Apartments in the 3400 block of Messanie, which were built to be inclusive for everyone.

“Citizenship was a hard-fought battle for women and was not given freely, but was achieved through hard work, sacrifice and wit,” Sanders-Tutt said. “St. Joseph suffragists were particularly remarkable women. They were able to get the majority of the community on board to support suffrage at a time when many had great difficulties getting community support.

They exemplified how powerful women are and the impact they can make in the world.”