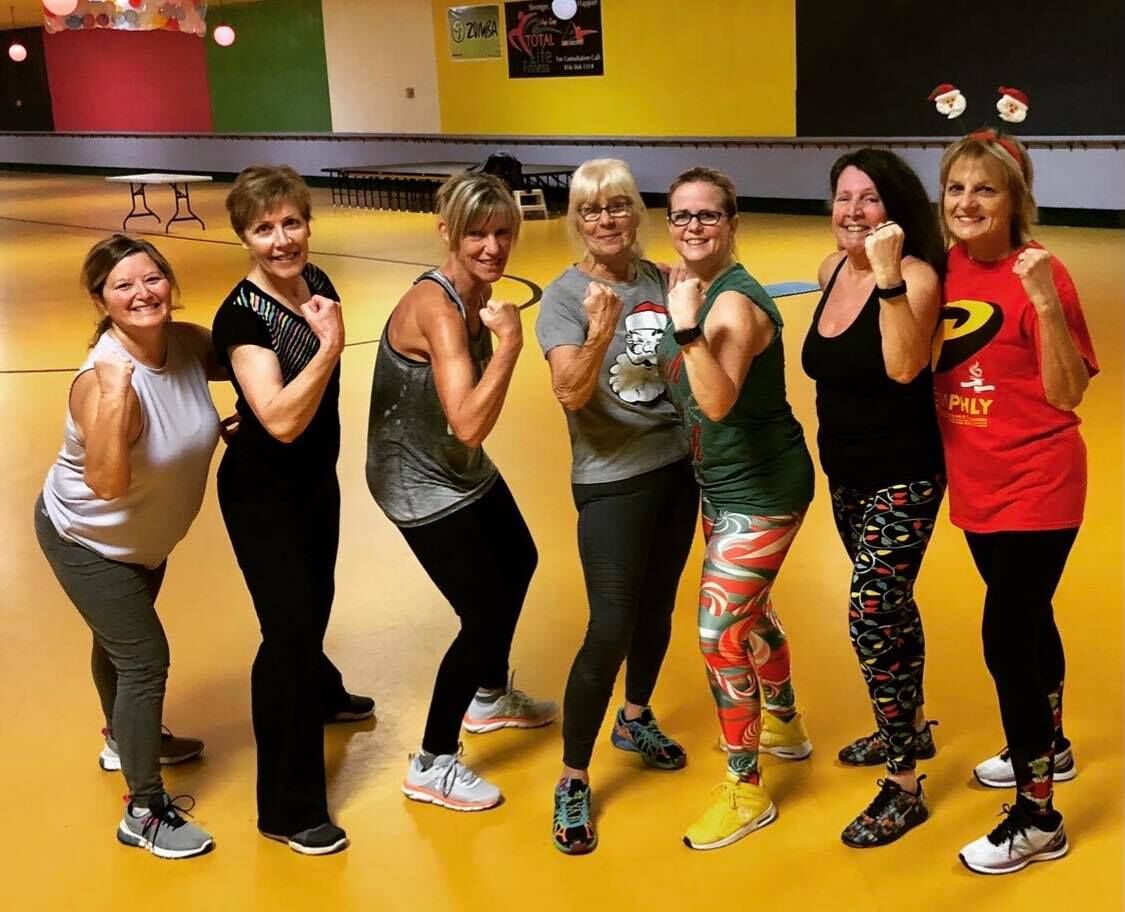 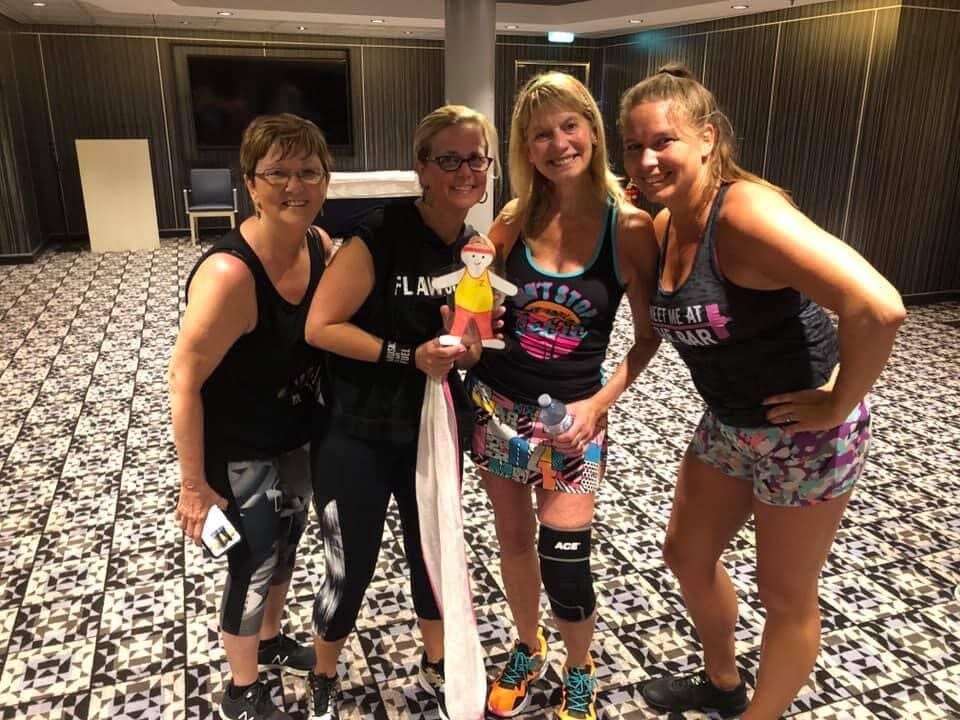 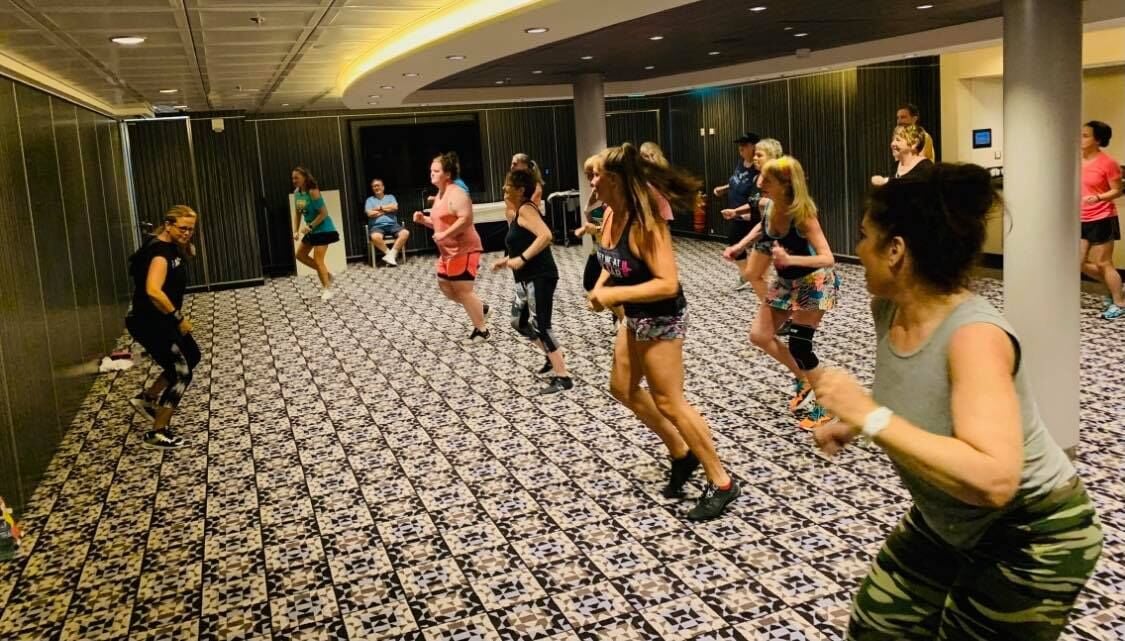 Amy Sharp teaches a Zumba class on board a cruise ship. 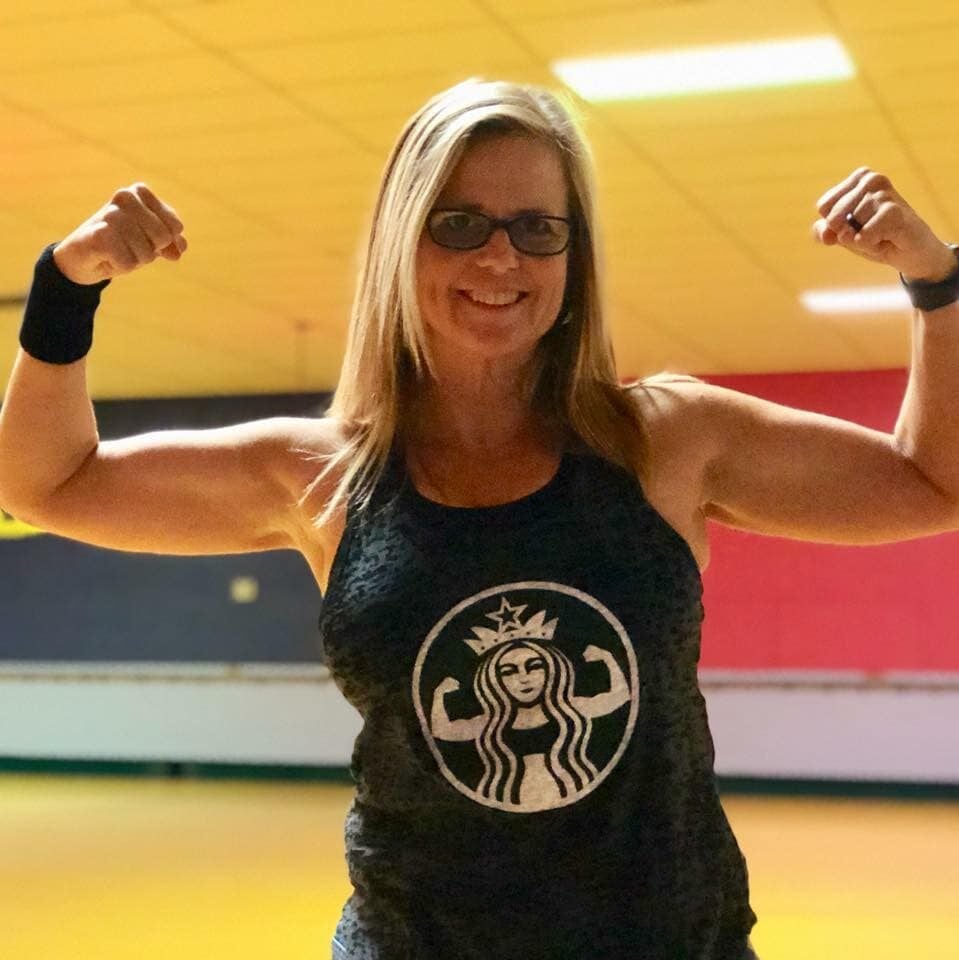 Amy Sharp teaches a Zumba class on board a cruise ship.

Even as St. Joseph boomed with new Zumba enthusiasts, Amy Shores Sharp sensed she wasn’t just jumping on a bandwagon for a short-lived fad when she also got into the Latin-dance-based fitness craze 11 years ago.

She had this sense because from the very beginning she knew the Zumba classes she led at her family’s business, B&J Skate Center, were about more than exercise. And more than a decade in, she’s proven herself more right than she ever expected.

“I never expected to make the friendships that I’ve made from it,” Sharp said. “There’s a bonding women get from exercising together.”

This concept isn’t new as evidenced by the popularity that aerobics classes gained in the 1980s and that other group-fitness phenomena have also seen. But since the COVID-19 pandemic hit, Sharp has definitely seen a new facet to the benefit of group fitness. She began offering Zumba classes for free via Zoom as soon as lockdowns started and found that for many women participating, it was a vital way not only to exercise but also to have a connection to the world outside their homes.

“A lot of people were very isolated during that time,” she said. “The Zoom sessions were something they looked forward to during the day because they weren’t going anywhere.”

Of course, the reason Sharp was able to offer such a helpful pandemic resource was that she’d already spent years building her Zumba experience and community. One of the main things that first drew her to this particular fitness approach was how fun it was, which stood in stark contrast to the exercise she had been doing.

She added that there’s something special about Zumba in the way its Latin music lifts spirits and encourages movement. Classes also offer an added benefit of being accessible to all ages and ability levels, as the aerobic benefits come regardless of a person’s dance skill.

And at Sharp’s classes, just as important as the exercise are the social times before and after. Women give updates on their lives, and as relationships have grown over the years, these Zumba sisters — as they call themselves — have supported each other through major issues. Sharp has even been a recipient of this support herself, with some of her students-turned-friends showing up to go on walks with her as she recovered from surgery last year.

The women also have a lot of fun at local get-togethers like restaurant gatherings and pool parties as well as travel experiences like a couple of Caribbean cruises. More than 50 people came on the most recent one, in 2019, and the ship provided a space for them to have an onboard Zumba class.

Zumba also played an unexpected role on Sharp’s first cruise, in 2013. There she and her husband met a couple from Boston who’d never heard of Zumba. But after learning about it, the wife is now a Zumba instructor herself — and Sharp taught a class alongside her during a recent trip to Boston.

“That’s how relationships just spread,” she said. “You meet the best people in Zumba.”

The importance of connections like this is why Sharp has continued to make her Zumba classes available via Zoom, even with the skating rink reopening a year ago. She plans to continue this as long as there’s a demand, although in-person classes are back in session from 4:30 to 5:30 p.m. on Mondays and Thursdays and from 9:30 to 10:30 a.m. on Saturdays. Classes are free to attend the first time and then $6 afterward, or offered at discounted rates through the purchase of a punch card. More information is available at bjskate.com.

Sharp said that new class members always receive a warm welcome and encouraged all women to find a social approach to fitness, even if Zumba isn’t their preference.

“If you can find positive people to be around, it helps mentally as well as physically,” she said. “That bonding — women helping women — is the best thing ever.”