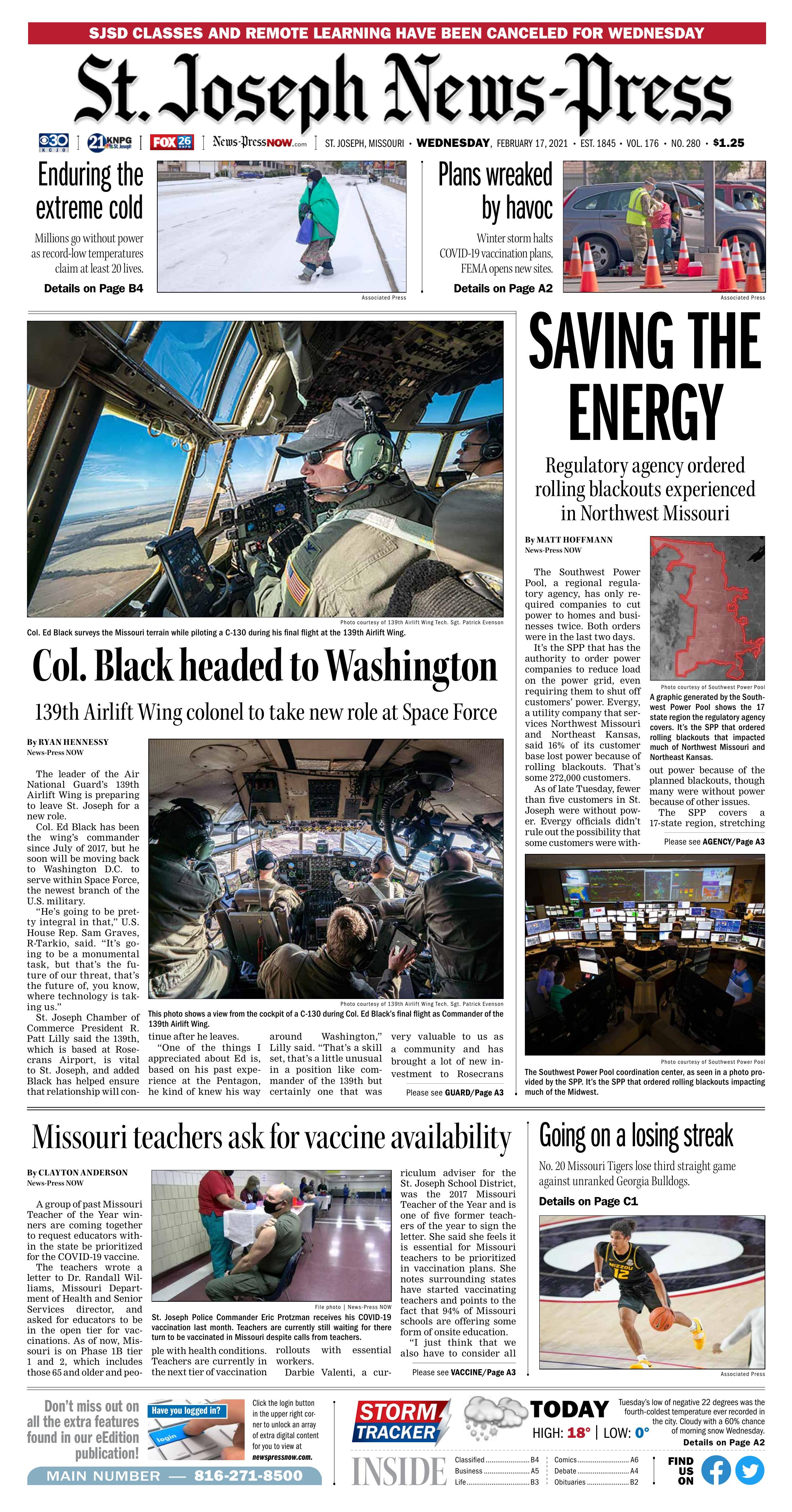 Col. Ed Black surveys the Missouri terrain while piloting a C-130 during his final flight at the 139th Airlift Wing.

This photo shows a view from the cockpit of a C-130 during Col. Ed Black’s final flight as Commander of the 139th Airlift Wing.

The leader of the Air National Guard’s 139th Airlift Wing is preparing to leave St. Joseph for a new role.

Col. Ed Black has been the wing’s commander since July of 2017, but he soon will be moving back to Washington D.C. to serve within Space Force, the newest branch of the U.S. military.

St. Joseph Chamber of Commerce President R. Patt Lilly said the 139th, which is based at Rosecrans Airport, is vital to St. Joseph, and added Black has helped ensure that relationship will continue after he leaves.

“One of the things I appreciated about Ed is, based on his past experience at the Pentagon, he kind of knew his way around Washington,” Lilly said. “That’s a skill set, that’s a little unusual in a position like commander of the 139th but certainly one that was very valuable to us as a community and has brought a lot of new investment to Rosecrans (Memorial Airport).”

Black’s leadership of the 139th included this past year, which has seen the guard’s activation by Missouri Gov. Mike Parson to combat the pandemic caused by COVID-19. The 139th helped set up virus testing sites throughout the state, administered tests, passed out food through Second Harvest Community Food Bank and, more recently, assisted with the vaccine rollout.

Black also has been responsible for helping continue the guard’s move to the north side of Rosecrans. Recently the guard held a groundbreaking ceremony for a new flight simulator building, which will be on the north part of the airport.

“Just take the C-130h upgrade stuff that we did, which is new propellers and avionics and engines. You know, he was tireless on that,” Graves said.

Black was born in St. Joseph and grew up in Rushville, Missouri. For nearly 30 years he has completed a number of assignments for the 139th.

Earlier this month Black took his “fini-flight,” also known as his final fight, as Wing Commander on a C-130.

The Southwest Power Pool, a regional regulatory agency, has only required companies to cut power to homes and businesses twice. Both orders were in the last two days.

It’s the SPP that has the authority to order power companies to reduce load on the power grid, even requiring them to shut off customers’ power. Evergy, a utility company that services Northwest Missouri and Northeast Kansas, said 16% of its customer base lost power because of rolling blackouts. That’s some 272,000 customers.

The SPP covers a 17-state region, stretching from the Canadian border to the Texas panhandle. According to internal SPP metrics, about 46% of the region’s current energy production is based on coal. Another 26% of the energy is coming from natural gas, with 15% coming from wind energy. Hydro energy and other sources accounted for less than 5% each.

Chuck Caisley, Evergy senior vice president and chief customer officer, said each of those energy sources was impacted by the harsh winter weather experienced across the Midwest. Energy plants in Iowa and Oklahoma were offline for at least parts of Tuesday, weather conditions slowed wind turbines and the price of natural gas spiked significantly because of extreme demand.

Caisley warned that further rolling blackouts haven’t been ruled out, with the grid expected to experience more load between the 8 p.m. and 8 a.m. hours overnight Tuesday.

“We hope to avoid what they’re seeing in Texas and other parts of the United States,” Caisley said.

Caisley said the temporary outages will continue through the peak power usage time for the SPP, which is 9 to 10 a.m.

Earlier in the day, at 7 a.m., roughly 3,200 customers in St. Joseph were without power. Evergy’s outage map can be viewed on its website. Customers still experiencing a power outage are urged to call the company.

Evergy has reduced electricity use at Evergy facilities, implemented cold-weather procedures and adapted operations at its power plants to keep equipment working and fuel available to generate electricity for customers.

In addition to the SPP call for reductions, its peers in Texas and the upper Midwest also are facing electricity shortages and are asking customers to conserve by turning down thermostats to at least 68 degrees, taking showers and washing clothes after 10 p.m. and unplugging devices not in use.

During a Tuesday afternoon press conference, Caisley said Evergy would work to spread costs to customers over a longer period of time to reduce rate increases, but he said the company incurred many maintenance, overtime and other expenses to keep power online.

St. Joseph Police Commander Eric Protzman receives his COVID-19 vaccination last month. Teachers are currently still waiting for there turn to be vaccinated in Missouri despite calls from teachers.

A group of past Missouri Teacher of the Year winners are coming together to request educators within the state be prioritized for the COVID-19 vaccine.

The teachers wrote a letter to Dr. Randall Williams, Missouri Department of Health and Senior Services director, and asked for educators to be in the open tier for vaccinations. As of now, Missouri is on Phase 1B tier 1 and 2, which includes those 65 and older and people with health conditions. Teachers are currently in the next tier of vaccination rollouts with essential workers.

Darbie Valenti, a curriculum adviser for the St. Joseph School District, was the 2017 Missouri Teacher of the Year and is one of five former teachers of the year to sign the letter. She said she feels it is essential for Missouri teachers to be prioritized in vaccination plans. She notes surrounding states have started vaccinating teachers and points to the fact that 94% of Missouri schools are offering some form of onsite education.

“I just think that we also have to consider all the sectors of the community that we touch and that we are associated with,” Valenti said. “I think by vaccinating teachers, it not only protects our teachers, which then in turn protects our students, but it also is an extra layer of protection for our students’ families as well.”

Valenti said she knows there is still a limited supply of vaccines and is aware some teachers might not want the shots, but she said she feels having the opportunity to get signed up and receive them would help make schools safer.

“There are states that have not vaccinated as many people as we have and they still have had options for teachers,” Valenti said.

Williams received the letter, and in a statement he said, “We look forward to the day when supply increases to the point where we can vaccinate our teachers and enhance classroom safety. Right now, Missouri remains committed to protecting more than 3 million senior citizens, health-care providers, first responders and (those with) underlying health conditions.”

Mosaic Life Care has seen a continued decrease in COVID-19 hospitalizations. The health system had five COVID patients on Tuesday, with four people being cared for at the St. Joseph campus and one hospitalized in Albany.

Changing Of The Guard