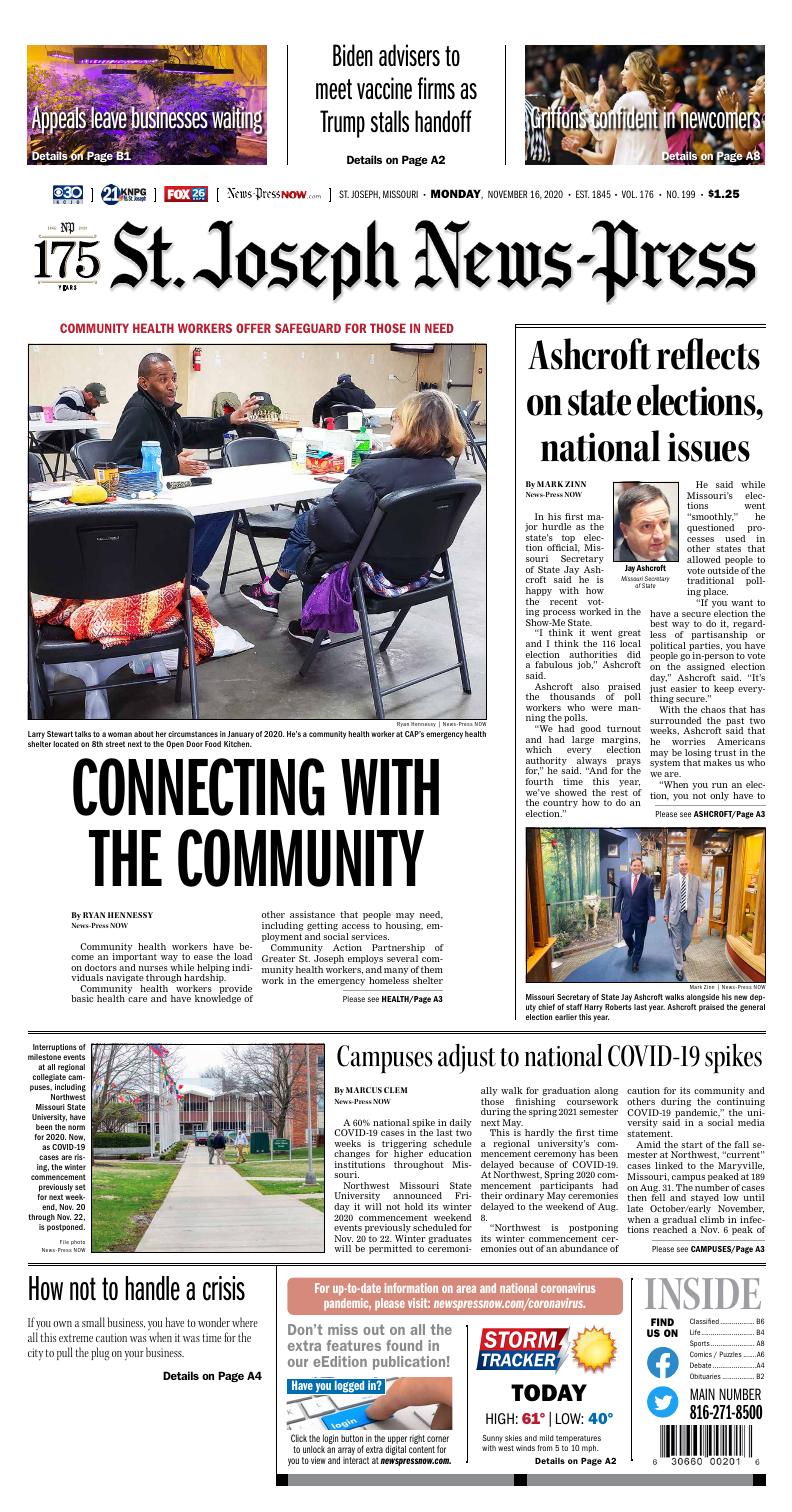 Homeless person sleeping on the sidewalk with bags.

Community health workers have become an important way to ease the load on doctors and nurses while helping individuals navigate through hardship.

Community health workers provide basic health care and have knowledge of other assistance that people may need, including getting access to housing, employment and social services.

Community Action Partnership of Greater St. Joseph employs several community health workers, and many of them work in the emergency homeless shelter on Eighth Street, next to the Open Door Food Kitchen.

“What’s so great about community health workers is that they really are there to build a relationship,” CAP Executive Director Whitney Lanning said. “It’s the humanity of their job – their job is to care about everyone, no matter where they come from.”

Agencies in St. Joseph began sending community health workers out to help individuals living in poverty about a decade ago. They help with barriers that can prevent people from improving their lives, and that’s especially important for the homeless community.

“The community health workers are trained to do this nitty-gritty, ground-level work,” Dr. Bob Stuber said. “One of the things that we ask the patients is that they want to do this.”

That drive to improve one’s life is perhaps the most important factor.

“He documented that determinant that poverty is to one’s health,” Dr. Stuber said.

While bringing the agencies together under the program, aptly named HEALTH, they were able to hire one community health worker, Rachael Bittiker, who is now the public affairs and community development director at CAP and oversees the emergency shelter.

Bittiker estimated she has impacted the lives of 500 individuals, although she’s attempted to help many more. That experience has came in handy as she helped train community health workers in the classroom with Judah.

The clinic located inside the Patee Market Health Center and overseen by the Social Welfare Board can sometimes be a revolving door for patients. However, if community health workers are involved they may be able to improve some dependent variables, like housing and income, which ultimately impact health.

“When a community health worker intervenes, it does a lot of good – not just for the individual, but also for the community,” Bittiker said. “You’re preventing health-care costs from going up, because they’re not, you know, using hospitals like they shouldn’t be for simple things.”

Mosaic got involved early on with the community health worker program after Dr. Stuber gave a presentation to the hospital. That provided funding for additional community health workers for three years through the Community Connect program. Mosaic also financially supported the emergency homeless shelter, but it had to pull funding earlier this year after the COVID-19 pandemic.

“The concept is one door,” Wilson said. “I can sit at my computer and send a referral to those agencies for that patient, and then they and I know that they have either not done it or they have done it, because it stays on my task list until it’s completed.”

Mosaic also endowed a population health program in 2015 at Missouri Western State University. The goal is to teach the next generation about the importance of a community’s overall health.

Catching health issues early on, or as the industry calls it “upstream,” can save money by preventing emergency health issues from arising.

“We’re not the only community doing this, but I think we’re one of first that did it,” Dr. Stuber said. “It should have a downstream effect on making health better for everyone.”

Community Missions has street outreach workers that interact with the homeless, as well.

Missouri Secretary of State Jay Ashcroft is shown in a2018 photo. The Republican praised Missouri's election process and called it a beacon for states across the country.

Former State Rep. Pat Conway, left, visits with Missouri Secretary of State Jay Ashcroft before a meeting in 2017. Ashcroft was encouraged by how elections went in Missouri.

Former Arkansas Gov. Mike Huckabee, left, listens to Jay Ashcroft, the Republican candidate for Missouri Secretary of State in 2016. Ashcroft was encouraged by how elections went in Missouri in 2020's general election.

In his first major hurdle as the state’s top election official, Missouri Secretary of State Jay Ashcroft said he is happy with how the recent voting process worked in the Show-Me State.

“I think it went great and I think the 116 local election authorities did a fabulous job,” Ashcroft said.

Ashcroft also praised the thousands of poll workers who were manning the polls.

“We had good turnout and had large margins, which every election authority always prays for,” he said. “And for the fourth time this year, we’ve showed the rest of the country how to do an election.”

He said while Missouri’s elections went “smoothly,” he questioned processes used in other states that allowed people to vote outside of the traditional polling place.

“If you want to have a secure election the best way to do it, regardless of partisanship or political parties, you have people go in-person to vote on the assigned election day,” Ashcroft said. “It’s just easier to keep everything secure.”

With the chaos that has surrounded the past two weeks, Ashcroft said that he worries Americans may be losing trust in the system that makes us who we are.

“When you run an election, you not only have to make sure that it runs well, but you have to run it in such a way that people understand that it was run well and we don’t have that,” said Ashcroft. “When people can’t have faith in how the election was run, your “winner” doesn’t have the mandate and the legitimacy that they should have attached to their victory.”

The GOP election chief also pointed to a Missouri law which allows local election officials to begin counting absentee and mail-in ballots five days before the day of the election.

“I think our election authorities did a fabulous job of getting those absentee and mail-in ballots counted in that same five-day period,” Ashcroft said. “For the most part, I don’t think people could even see a delay. And if there was, it was maybe 15 minutes or a half of an hour, which is awesome.”

Another differentiating factor that Ashcroft pointed to was a relatively simple and transparent process to ensure every vote in Missouri is counted on election day (or night). In some cases, a recount can be requested or automatically performed when two contending candidates finish within a 0.5% margin of each other.

Recount or not, Ashcroft said the voting apparatus in Missouri is sound.

“We do have audits that are required to verify that our equipment is counting the same way we count when we look at the ballots,” said Ashcroft, who added audits are performed by each county’s clerk.

No matter the outcomes in other states, Ashcroft said right now the election process needs stability.

Interruptions of milestone events at all regional collegiate campuses, including Northwest Missouri State University, have been the norm for 2020. Now, as COVID-19 cases are rising, the winter commencement previously set for next weekend, Nov. 20 through Nov. 22, is postponed.

A 60% national spike in daily COVID-19 cases in the last two weeks is triggering schedule changes for higher education institutions throughout Missouri.

Northwest Missouri State University announced Friday it will not hold its winter 2020 commencement weekend events previously scheduled for Nov. 20 to 22. Winter graduates will be permitted to ceremonially walk for graduation along those finishing coursework during the spring 2021 semester next May.

This is hardly the first time a regional university’s commencement ceremony has been delayed because of COVID-19. At Northwest, Spring 2020 commencement participants had their ordinary May ceremonies delayed to the weekend of Aug. 8.

“Northwest is postponing its winter commencement ceremonies out of an abundance of caution for its community and others during the continuing COVID-19 pandemic,” the university said in a social media statement.

Amid the start of the fall semester at Northwest, “current” cases linked to the Maryville, Missouri, campus peaked at 189 on Aug. 31. The number of cases then fell and stayed low until late October/early November, when a gradual climb in infections reached a Nov. 6 peak of 116. The pace has since decreased to about 80 current cases.

Missouri Western State University has never exceeded 100 active COVID-19 cases and reported 48 current cases linked to the campus on Nov. 11. For its part, Western anticipated months ago that COVID-19 might hinder normal activities in colder months — when people are more likely to be in tighter spaces indoors. It has gone through the whole semester with academics scheduled to conclude by Dec. 2.

Across the river, Highland Community College in Doniphan County, Kansas, went to all-online learning through the end of the semester on Friday, Dec. 18. In the broader region, the University of Missouri-Columbia in Boone County, Missouri, will commence all-online education after Thanksgiving break, on Monday, Nov. 30, and will not return to in-person classes until mid-January. Missouri Southern University in Joplin, Missouri, has adopted similar plans. 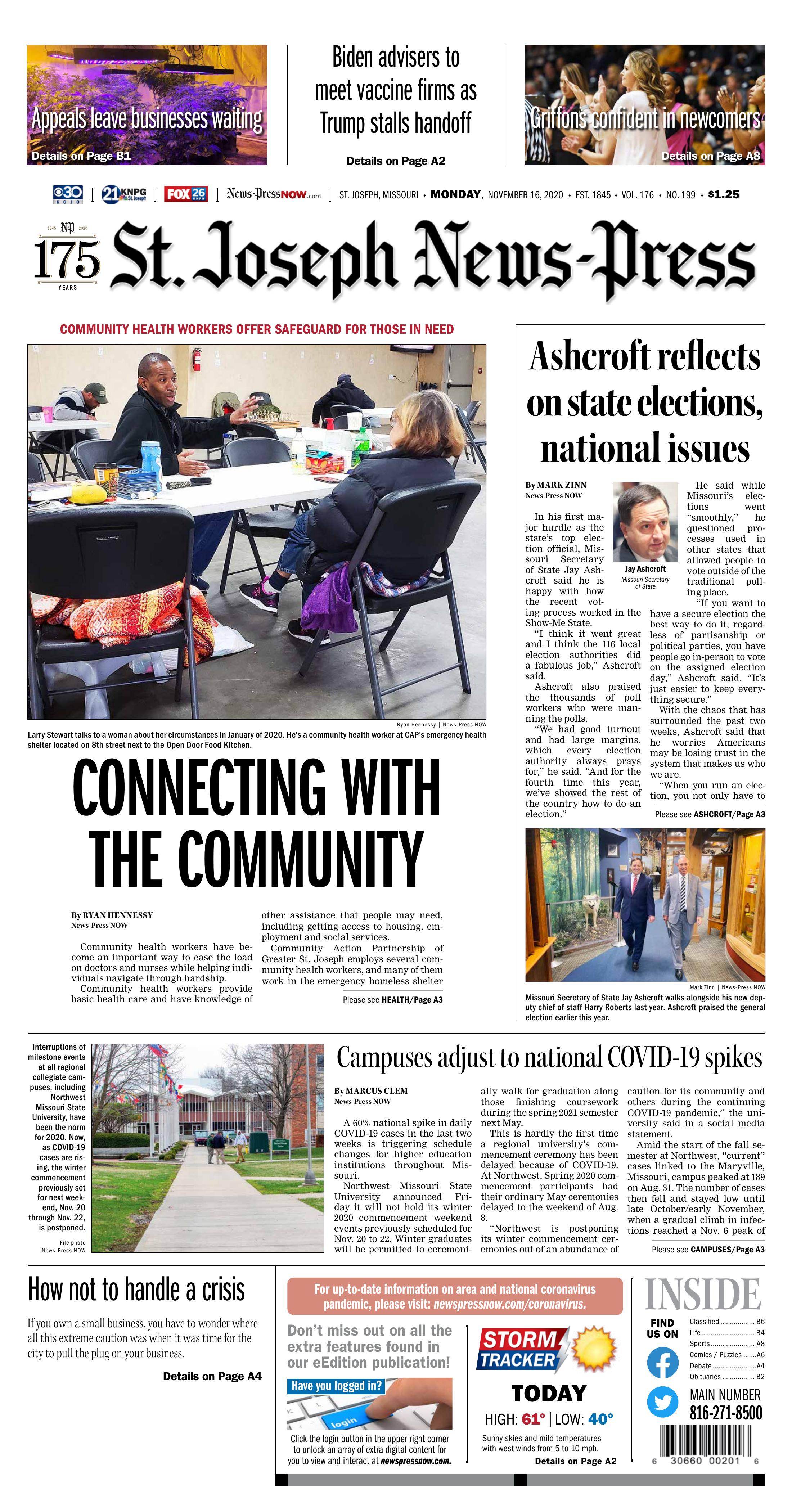