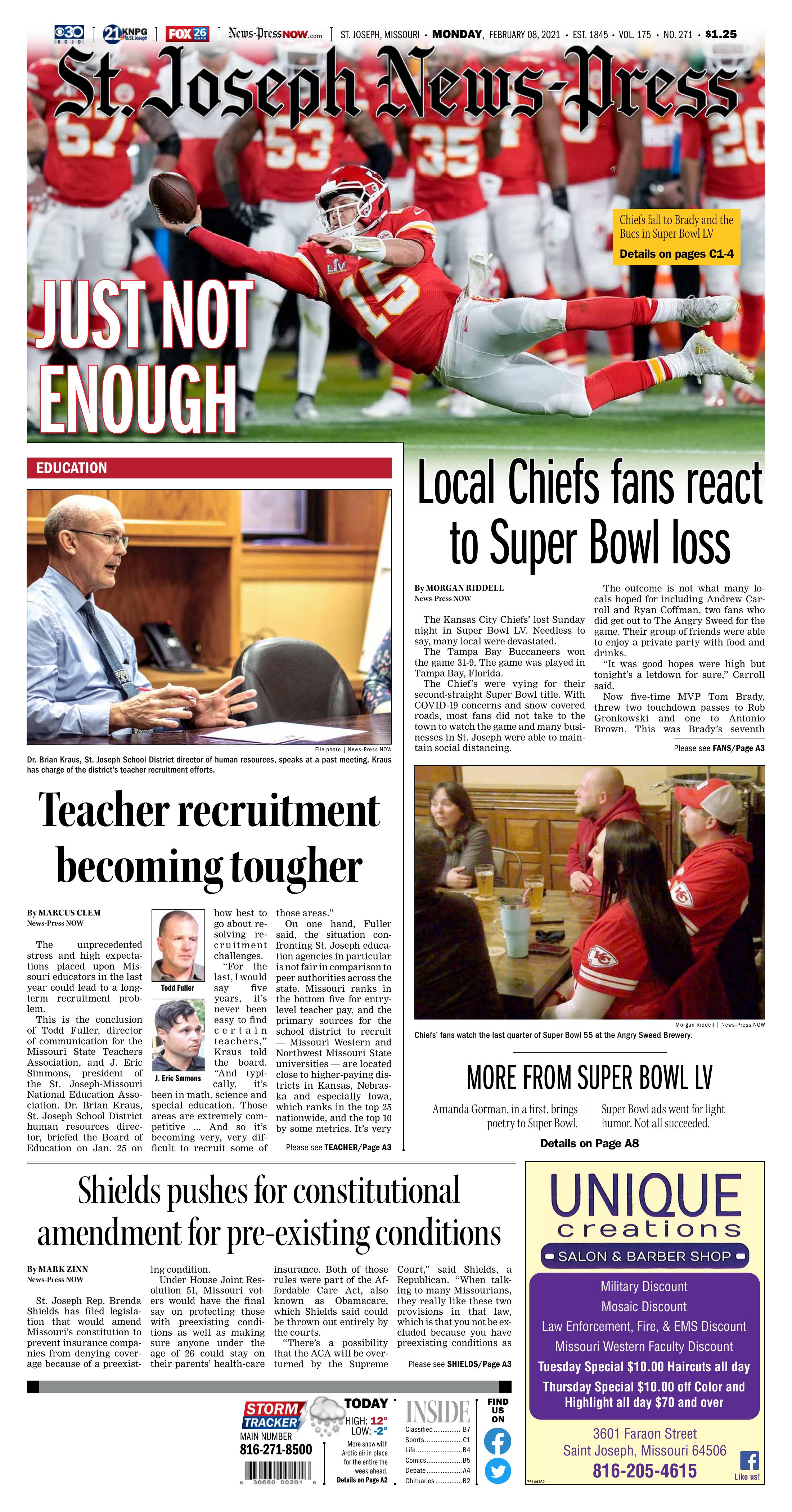 The Tampa Bay Buccaneers won the game 31-9, The game was played in Tampa Bay, Florida.

The Chiefs were vying for their second-straight Super Bowl title. With COVID-19 concerns and snow covered roads, most fans did not take to the town to watch the game and many businesses in St. Joseph were able to maintain social distancing.

The outcome is not what many locals hoped for including Andrew Carroll and Ryan Coffman, two fans who did get out to The Angry Swede for the game. Their group of friends were able to enjoy a private party with food and drinks.

“It was good hopes were high but tonight’s a letdown for sure,” Carroll said.

“It’s disappointing. I know the Chief’s came out really wanting to win, especially after last year. But I guess a GOAT like Brady, that makes it tough,” Coffman said.

There was some injuries that held some starters out of the big game, and the two hope they will get taken care of before next season, and are hopeful the Chiefs could get back to the Super Bowl.

“Go Chiefs we’re ready for next year,” both Carroll and Coffman said.

Tampa’s victory prevented Mahomes and the Chiefs (16-3) from becoming the first repeat champions since Brady’s Patriots did it in 2003-04.

Last year, his second year in the NFL, Mahomes brought the Chiefs back from a 10-point deficit in the fourth quarter of the Super Bowl against San Francisco. He earned MVP honors in leading Kansas City to its first championship win in a half-century.

The unprecedented stress and high expectations placed upon Missouri educators in the last year could lead to a long-term recruitment problem.

This is the conclusion of Todd Fuller, director of communication for the Missouri State Teachers Association, and J. Eric Simmons, president of the St. Joseph-Missouri National Education Association. Dr. Brian Kraus, St. Joseph School District human resources director, briefed the Board of Education on Jan. 25 on how best to go about resolving recruitment challenges.

“For the last, I would say five years, it’s never been easy to find certain teachers,” Kraus told the board. “And typically, it’s been in math, science and special education. Those areas are extremely competitive ... And so it’s becoming very, very difficult to recruit some of those areas.”

On one hand, Fuller said, the situation confronting St. Joseph education agencies in particular is not fair in comparison to peer authorities across the state. Missouri ranks in the bottom five for entry-level teacher pay, and the primary sources for the school district to recruit — Missouri Western and Northwest Missouri State universities — are located close to higher-paying districts in Kansas, Nebraska and especially Iowa, which ranks in the top 25 nationwide, and the top 10 by some metrics. It’s very easy for someone to graduate and hop across the border to enjoy greener pastures.

On the other hand, Fuller said, Missouri as a whole has a persistent mindset in which education authorities are too often fearful of political blowback from improving teacher pay.

Simmons is pushing for aggressive action to tackle the problem locally.

“The Missouri NEA publishes a salaries and benchmarks document every year,” he said. “It breaks it down so that you can see, in a district with more than 10,000 students, where does St. Joe fall? And St. Joe falls 20th out of 20 in the minimum bachelor’s degree salary. When you look at the maximum salary schedule, we ranked 19th out of 20. When you look at just the Kansas City-area schools that have more than 10,000 students, we ranked seventh out of seven in the bachelor’s-minimum category. So, it’s pretty consistent all across the board.”

The path to address this may be challenging. Kraus has said the district spends roughly $250,000 per class day on teaching salaries in an environment where losses in state funding and tax revenues due to the economic impacts of COVID-19 have left the district pulling out all the stops to avoid deficit spending.

“The overarching goal of our HR department is to recruit, train and retain the very best teachers that we possibly can for our students,” Kraus said. “And not only teachers, everybody that works for us.”

Missouri state Rep. Brenda Shields stands in a gallery overlooking the Missouri House chamber on the opening day of the legislative session earlier this month. Shields was picked by House Speaker Rob Vescovo to chair the House Higher Education Committee.

St. Joseph Rep. Brenda Shields has filed legislation that would amend Missouri’s constitution to prevent insurance companies from denying coverage because of a preexisting condition.

Under House Joint Resolution 51, Missouri voters would have the final say on protecting those with preexisting conditions as well as making sure anyone under the age of 26 could stay on their parents’ health-care insurance. Both of those rules were part of the Affordable Care Act, also known as Obamacare, which Shields said could be thrown out entirely by the courts.

“There’s a possibility that the ACA will be overturned by the Supreme Court,” said Shields, a Republican. “When talking to many Missourians, they really like these two provisions in that law, which is that you not be excluded because you have preexisting conditions as well as the comfort that parents have knowing that they can insure their child up to age 26 on their health insurance.”

Shields said the ongoing pandemic was something on her mind as the resolution was being drafted.

“We have about 1.2 million Missourians who have preexisting conditions, but we also know with COVID that number could really increase dramatically,” she said. “So I think that individuals want to know just because they’ve had COVID that they would not be excluded from being able to get health insurance.”

If approved by the Legislature, the proposed amendment would head to voters in 2022 for the final approval. Shields said more than 30 states have implemented similar measures.

“We want to make sure in the state of Missouri that we are ahead of the game if the ACA is thrown out,” she said. “And that Missourians have the opportunity to vote and make a decision if they want to see these two provisions put in the constitution.”

The proposed ballot language reads, “Shall the Missouri Constitution be amended to provide health insurance protections for children and adults with preexisting conditions and to require insurance companies to allow children to retain dependent coverage until the age of twenty-six, except as precluded by federal law and in excepted benefit plans?”