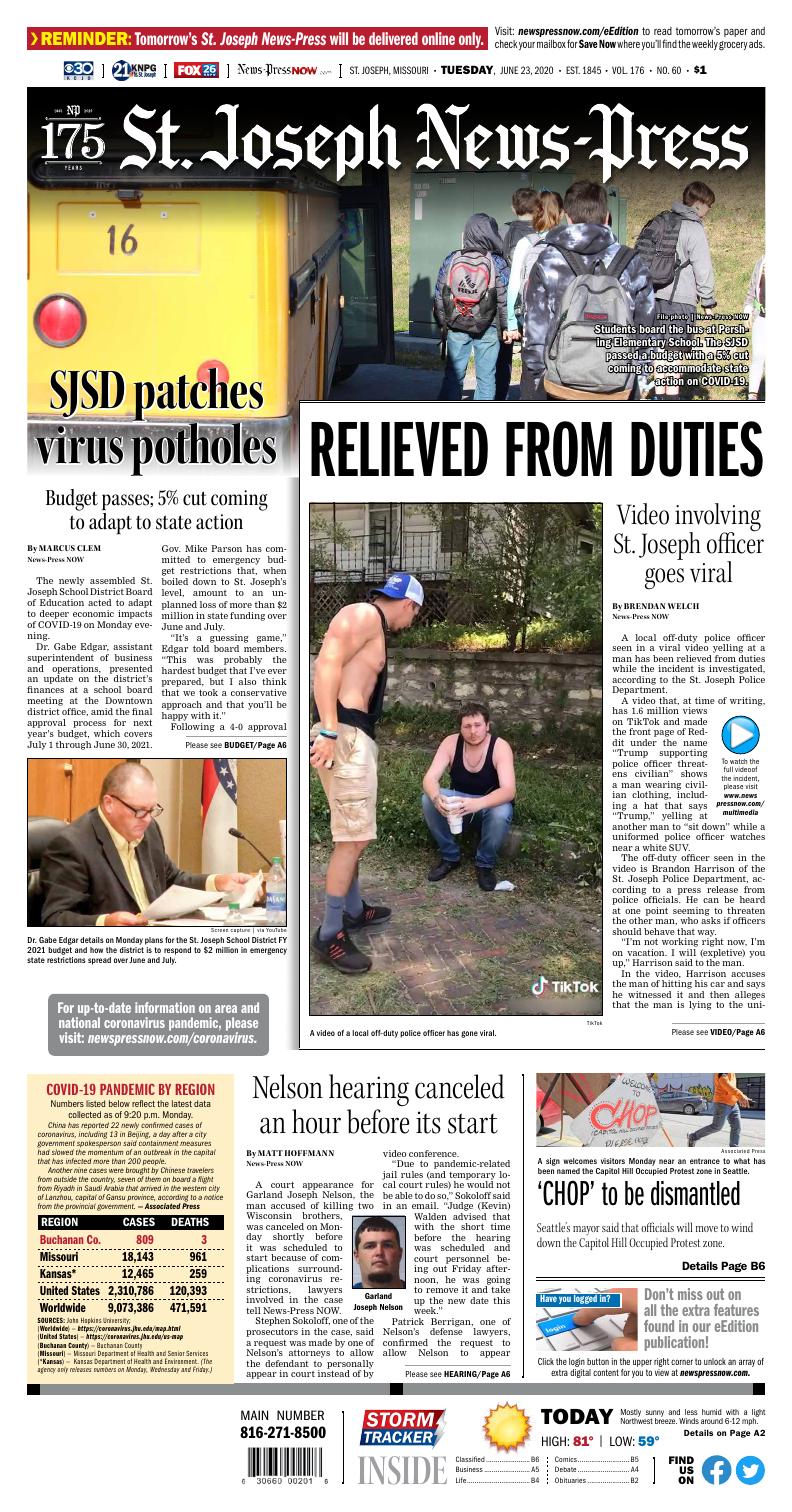 Dr. Gabe Edgar details on Monday plans for the St. Joseph School District FY 2021 budget and how the district is to respond to $2 million in emergency state restrictions spread over June and July.

Students board the bus at Pershing Elementary School. The SJSD passed a budget with a 5% cut coming to accommodate state action on COVID-19.

The newly assembled St. Joseph School District Board of Education acted to adapt to deeper economic impacts of COVID-19 on Monday evening.

Dr. Gabe Edgar, assistant superintendent of business and operations, presented an update on the district’s finances at a school board meeting at the Downtown district office, amid the final approval process for next year’s budget, which covers July 1 through June 30, 2021. Gov. Mike Parson has committed to emergency budget restrictions that, when boiled down to St. Joseph’s level, amount to an unplanned loss of more than $2 million in state funding over June and July.

“It’s a guessing game,” Edgar told board members. “This was probably the hardest budget that I’ve ever prepared, but I also think that we took a conservative approach and that you’ll be happy with it.”

Following a 4-0 approval vote for the budget, which featured ayes from board Vice President Lute Atieh, board President Tami Pasley, new board member Lori Witham and board member Larry Koch, the conversation turned to how the district is adapting to financial impacts it can’t plan for.

Chiefly, a 5% across-the-board cut will be detailed on Tuesday, while the budget itself is being treated as a “working document” more than at any time in Edgar’s previous experience, as he described it. Edgar observed how the district entered the COVID-19 crisis with stable finances and a budget surplus, and how the measures being taken now leave the district in a “pretty good” place from a financial perspective.

Edgar explained how the state would be prudent to reform the process by which funding is supplied based on student headcounts.

The financial discussion happened without the presence of departed board president Seth Wright, who did not seek the presidency in favor of Pasley earlier this month and resigned from the board last Thursday. The formal acceptance of Wright’s resignation letter took place at Monday’s board meeting.

A replacement process will be opened up Tuesday, with board members laying out a schedule to appoint someone by the end of July to serve out Wright’s three-year term. Whoever was selected would have to step down in spring 2021 or run for a three-year term of their own in the municipal general election for the year, likely to take place in April.

A video of a local off-duty police officer has gone viral.

A local off-duty police officer seen in a viral video yelling at a man has been relieved from duties while the incident is investigated, according to the St. Joseph Police Department.

A video that, at time of writing, has 1.6 million views on TikTok and made the front page of Reddit under the name “Trump supporting police officer threatens civilian” shows a man wearing civilian clothing, including a hat that says “Trump,” yelling at another man to “sit down” while a uniformed police officer watches near a white SUV.

The off-duty officer seen in the video is Brandon Harrison of the St. Joseph Police Department, according to a press release from police officials. He can be heard at one point seeming to threaten the other man, who asks if officers should behave that way.

“I’m not working right now, I’m on vacation. I will (expletive) you up,” Harrison said to the man.

In the video, Harrison accuses the man of hitting his car and says he witnessed it and then alleges that the man is lying to the uniformed officer.

“You don’t lie to her about that ... I just watched you hit me,” Harrison can be heard saying in the video, which contained profanity. “Tell that to a ... judge and see who they ... believe.”

Capt. Jeff Wilson of the SJPD said he could not go into details about the incident while the investigation is ongoing, but he said a vehicle was struck. Officials did not say when the incident happened.

A press release sent to News-Press NOW from Wilson states that an investigation is underway. It added that Harrison has been moved to non-police duties.

“The details of this incident are currently being investigated by the department and the involved officer has been relieved from official police duties and placed on administrative duty, pending the outcome of the investigation,” it reads.

The department also commented on the responsibility to police professionally in the statement.

“Police officers are the most conspicuous representatives of government and, to the majority of people, they are a symbol of stability and authority upon which they can rely,” the release states. “Unbecoming conduct on the part of police officers adversely affects the operations of the department and ultimately destroys public confidence in it. All matters involving officer misconduct allegations are and will be investigated by the department.”

Harrison has been a member of the St. Joseph Police Department since January of last year.

No records of tickets or a probable cause statement were available at the Buchanan County courthouse regarding the incident Monday, but an employee of the City Prosecutor’s Office said tickets sometimes take several days to process.

News-Press NOW reached out to the original poster of the video via social media and has not received a response.

A court appearance for Garland Joseph Nelson, the man accused of killing two Wisconsin brothers, was canceled on Monday shortly before it was scheduled to start because of complications surrounding coronavirus restrictions, lawyers involved in the case tell News-Press NOW.

Stephen Sokoloff, one of the prosecutors in the case, said a request was made by one of Nelson’s attorneys to allow the defendant to personally appear in court instead of by video conference.

“Due to pandemic-related jail rules (and temporary local court rules) he would not be able to do so,” Sokoloff said in an email. “Judge (Kevin) Walden advised that with the short time before the hearing was scheduled and court personnel being out Friday afternoon, he was going to remove it and take up the new date this week.”

Patrick Berrigan, one of Nelson’s defense lawyers, confirmed the request to allow Nelson to appear personally.

“Unfortunately, the coronavirus pandemic makes in-person court appearances difficult, at least for now,” Berrigan said in an email. “Judge Walden decided to postpone the hearing a few weeks (no new date yet) to see if conditions improve to the point where Mr. Nelson can safely come to court.”

A new date has not been set for the hearing, according to online court records. Lawyers for both sides were scheduled to argue a motion brought by Nelson’s defense team that the venue for his trial should be changed.

“Current practice is for the persons confined in the county detention facility to appear by interactive video technology,” Judge Kevin Walden, the assigned judge for the case, said in an online court order. “It has been represented by the defendant’s counsel that attorneys are not allowed contact visits with clients in the detention facility and attorneys are not allowed to bring cell phones into the secure areas of the facility.”

Walden also wrote that the matters scheduled for Monday’s hearing were “procedural in nature” and “should not impact of this case.”

Berrigan told News-Press NOW that Nelson had not accepted a plea deal.

Nelson has been held without bail since last July in the deaths of Nicholas and Justin Diemel. He faces several felony charges, including two murder charges. 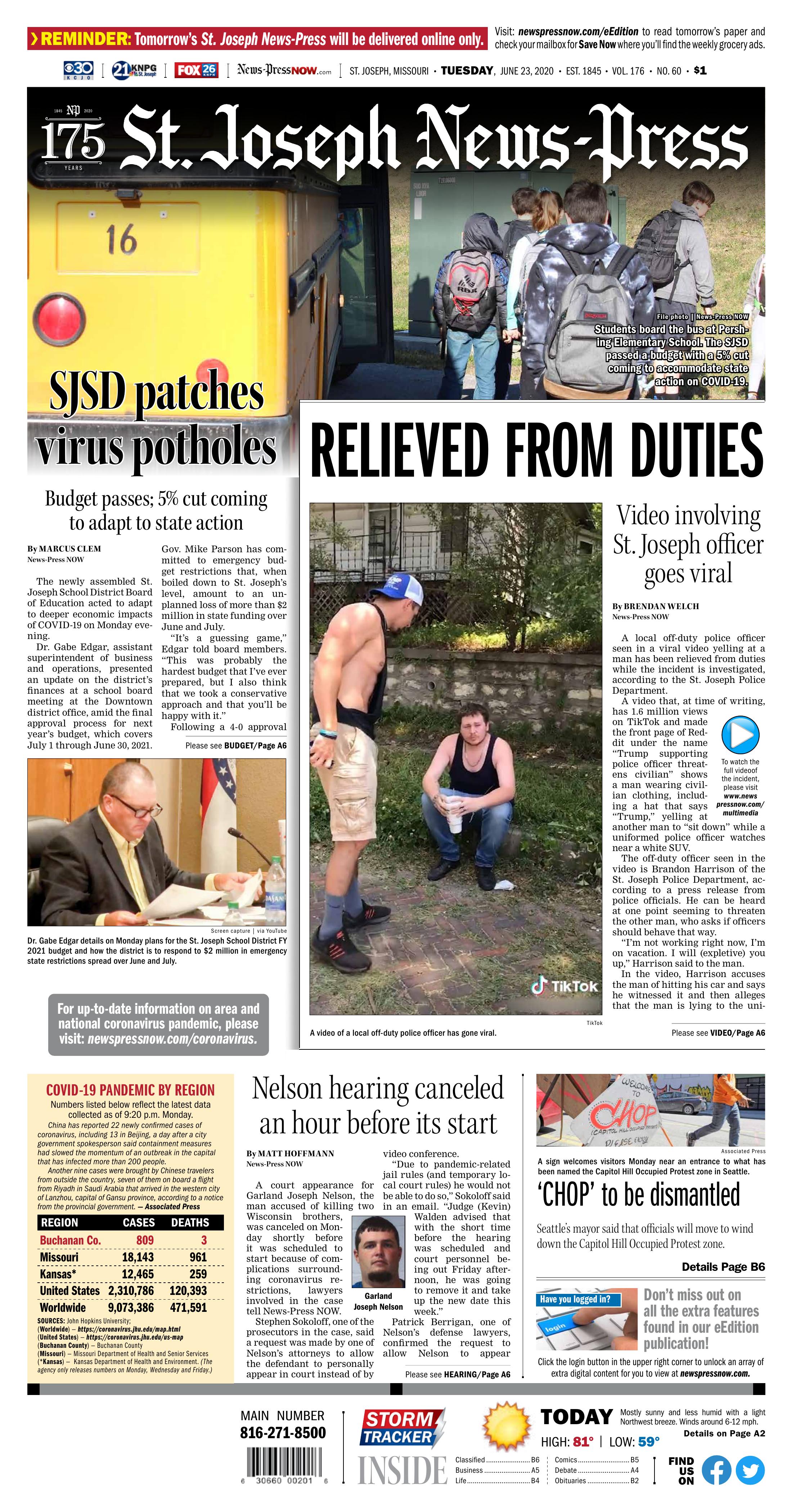