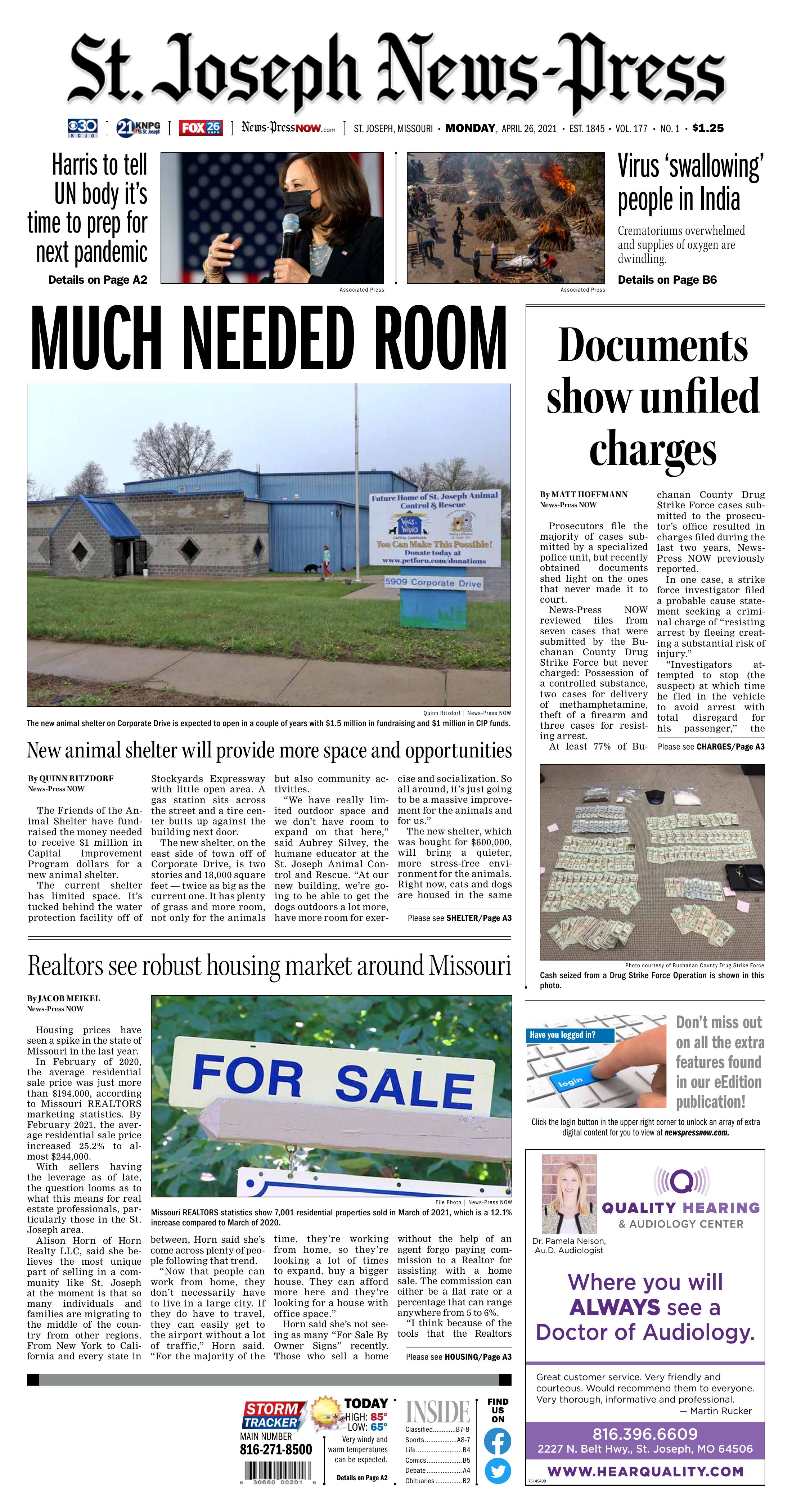 The new animal shelter on Corporate Drive is expected to open in a couple of years with $1.5 million in fundraising and $1 million in CIP funds.

The Friends of the Animal Shelter have fundraised the money needed to receive $1 million in Capital Improvement Program dollars for a new animal shelter.

The current shelter has limited space. It’s tucked behind the water protection facility off of Stockyards Expressway with little open area. A gas station sits across the street and a tire center butts up against the building next door.

The new shelter, on the east side of town off of Corporate Drive, is two stories and 18,000 square feet — twice as big as the current one. It has plenty of grass and more room, not only for the animals but also community activities.

“We have really limited outdoor space and we don’t have room to expand on that here,” said Aubrey Silvey, the humane educator at the St. Joseph Animal Control and Rescue. “At our new building, we’re going to be able to get the dogs outdoors a lot more, have more room for exercise and socialization. So all around, it’s just going to be a massive improvement for the animals and for us.”

The new shelter, which was bought for $600,000, will bring a quieter, more stress-free environment for the animals. Right now, cats and dogs are housed in the same room, which isn’t ideal, but the new shelter will be able to separate them.

“We’re going to have areas that are dedicated for intake of animals versus here we just have one entrance, so everything comes through the front door and can get kind of crazy and stressful for the animals that are coming in,” Silvey said.

But funds for the new facility weren’t just handed to the Friends of the Animal Shelter. The group had to prove to the city that it had skin in the game too. To receive the $1 million in CIP funds, the volunteer group had to fundraise $1.5 million.

“I think they just wanted to make sure that we were serious,” said Whitney Zoghby, the president of Friends of the Animal Shelter. “I think it’s a little bit scary for them to give a city project to a nonprofit, and they wanted to make sure that it was something that we really could fundraise for. I think we surprised everyone, and it really shows how much support we have from businesses and individuals in the community.”

The Friends of the Animal Shelter have raised about $1.7 million through the usual annual events, but they also had to be clever during the pandemic.

“We’ve put together a lot of annual fundraisers as well as kind of creative, unique ones, especially during COVID,” Zoghby said. “A lot of the large fundraisers that we usually do couldn’t happen last year, so we did a lot of social media campaigning, a lot of virtual type fundraising activities.”

The CIP funds won’t be available until fiscal year 2023, which means the new shelter won’t be renovated and open for a couple more years. Yet, staff and volunteers are excited about what the new shelter will mean for the animals.

“We knew that this was something that the community and its animals needed,” Zoghby said. “The current shelter is just not adequate for what our community needs now. Meeting best sheltering practices is really important, not only for the staff, but the volunteers who go down there and spend time with those animals on a daily basis.”

Cash seized from a Drug Strike Force Operation is shown in this photo.

Prosecutors file the majority of cases submitted by a specialized police unit, but recently obtained documents shed light on the ones that never made it to court.

News-Press NOW reviewed files from seven cases that were submitted by the Buchanan County Drug Strike Force but never charged: Possession of a controlled substance, two cases for delivery of methamphetamine, theft of a firearm and three cases for resisting arrest.

In one case, a strike force investigator filed a probable cause statement seeking a criminal charge of “resisting arrest by fleeing creating a substantial risk of injury.”

“Investigators attempted to stop (the suspect) at which time he fled in the vehicle to avoid arrest with total disregard for his passenger,” the investigator wrote in the statement. “Attempts were made to deploy stop sticks ... but he avoided the sticks by fleeing onto gravel county roads at high rates of speed.”

The charge was turned down as an “inappropriate prosecution,” according to previously internal “submission reports” obtained through public record laws.

News-Press NOW is not publishing the names of people listed in the reports because they were never charged with the crime sought by investigators.

In another report, which was submitted by a deputy with the Buchanan County Sheriff’s Office, prosecutors declined to file theft of a firearm and unlawful possession of a firearm charges.

Those charges were turned down for having insufficient evidence.

“I was investigating a stealing report of a firearm,” the deputy wrote in a probable cause statement. “Upon further investigation and victim statements, it was found (the suspect) stole a black Ruger from the center console of the truck, thereby depriving the victim of his property.”

The probable cause statement indicates the suspect and the alleged victim were recently in a domestic relationship.

In another Drug Strike Force case, a charge for delivering methamphetamine wasn’t filed.

According to the submission report, the declination was listed as “other reason.”

Holliday previously told News-Press NOW that prosecutors must select a reason for declining a charge in the software his office uses, meaning different categories may have different meanings to each prosecutors.

“(The suspect) knowingly met with and sold approximately 2.40 grams of methamphetamine to a confidential police informant,” the strike force investigator wrote in a probable cause statement. “The informant purchased the meth using police buy money under the direction of the DSF.”

According to an additional narrative report, the confidential informant was provided video and audio recording equipment. However, no audio was apparently recorded, leaving law enforcement with just video.

Images attached to the case file show five $20 bills, a baggie on a scale containing a while substance and an apparent screen grab of two men sitting in a car.

Prosecutors also declined another drug case for insufficient evidence. In that case, an investigator with the strike force sought a charge for “possession of a controlled substance.”

In a probable cause statement, an investigator wrote that they were searching for a suspect with an “active felony” warrant. They observed the suspect standing on her front porch but she moved inside as the police closed in.

“(The suspect) was located hiding in the basement,” the investigator wrote. “She discarded her purse when she was arrested. The purse contained several items of paraphernalia.”

“(The suspect) told us she does not sell meth but will get it for her friends,” the investigator wrote.

Missouri REALTORS statistics show 7,001 residential properties sold in March of 2021, which is a 12.1% increase compared to March of 2020.

Housing prices have seen a spike in the state of Missouri in the last year.

With sellers having the leverage as of late, the question looms as to what this means for real estate professionals, particularly those in the St. Joseph area.

Alison Horn of Horn Realty LLC, said she believes the most unique part of selling in a community like St. Joseph at the moment is that so many individuals and families are migrating to the middle of the country from other regions. From New York to California and every state in between, Horn said she’s come across plenty of people following that trend.

“Now that people can work from home, they don’t necessarily have to live in a large city. If they do have to travel, they can easily get to the airport without a lot of traffic,” Horn said. “For the majority of the time, they’re working from home, so they’re looking a lot of times to expand, buy a bigger house. They can afford more here and they’re looking for a house with office space.”

Horn said she’s not seeing as many “For Sale By Owner Signs” recently. Those who sell a home without the help of an agent forgo paying commission to a Realtor for assisting with a home sale. The commission can either be a flat rate or a percentage that can range anywhere from 5 to 6%.

“I think because of the tools that the Realtors have to help someone be able to advertise their property with the internet, with the virtual tools, things like that, I think sellers are more leaning on listing their property to help them get it sold,” Horn said.

While permits in the Kansas City metro area are outpacing the number of new jobs, according to statistics from the National Association of Realtors, Jo Ann Cobb of Jo Ann Cobb Realtors said the shortage of houses in the St. Joseph area had her working a lot in 2020 and now into 2021. She said offers for many houses roll in once a property is listed.

“When I get an offer on one of my houses, I get like five offers within one day. The big thing for all of us Realtors right now is the shortage of houses to sell,” said Cobb.

While it’s still advantageous to be a seller as the demand for homes increases, Cobb said low interest rates make things favorable for buyers as well. According to data from NerdWallet, interest rates for 15-year home loans hovered around 3.3% this time last year. Those rates dropped to 2.8% as of 2021.

With new technologies such as 3D displays of homes used by real estate agencies to sell homes, buyers don’t have to be present inside a home in order to be enticed to purchase. Both Cobb and Horn have had to adjust to the new ways of selling during the COVID-19 pandemic, but Cobb said she is anxious to get back to the old ways of selling.

“I am very traditional,” said Cobb. “I’m not going to write a contract unless I’ve walked the person through a home for fear I would make a mistake on the contract or something. I want to do a person-to-person service.”