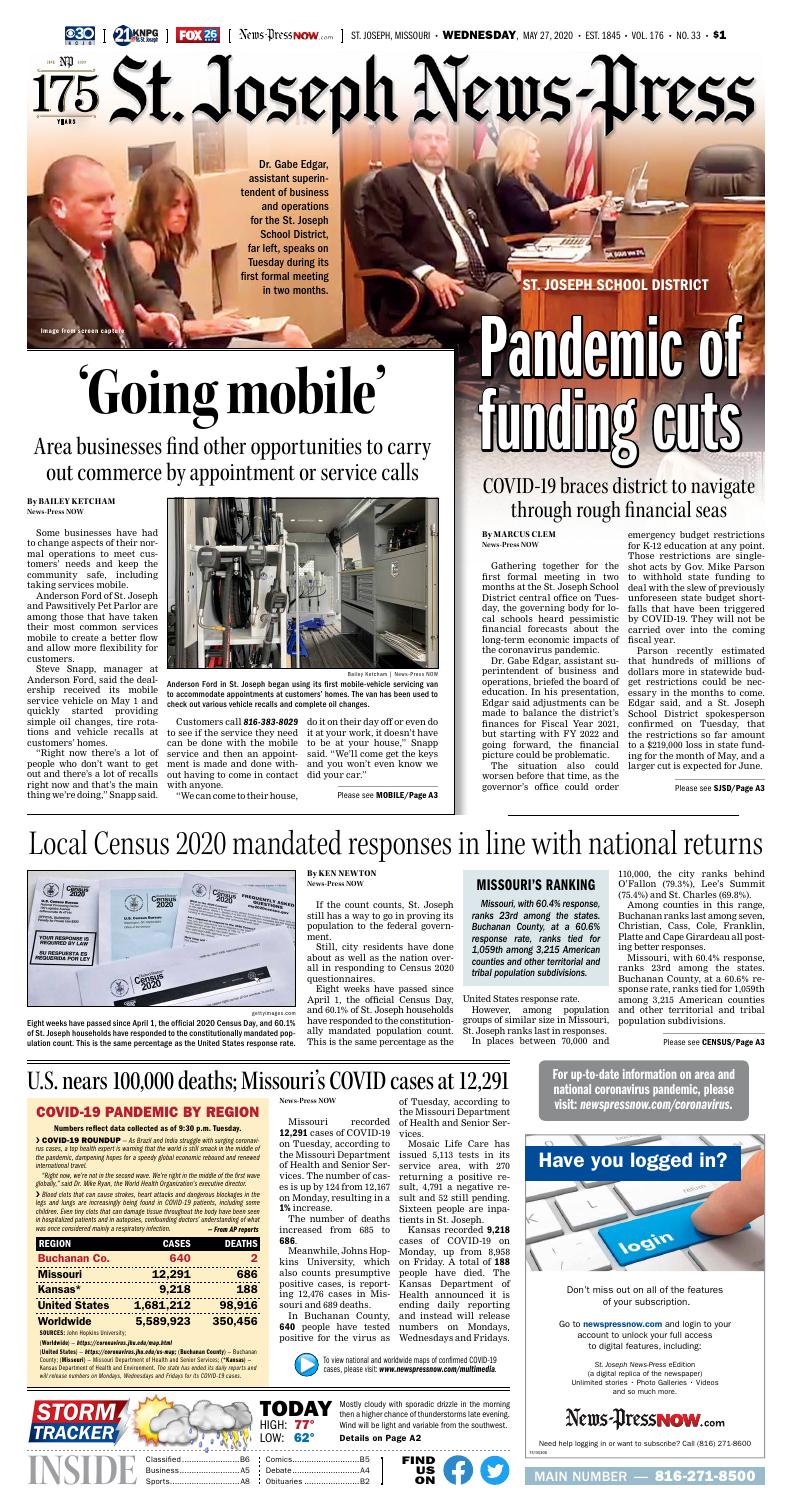 Gathering together for the first formal meeting in two months at the St. Joseph School District central office on Tuesday, the governing body for local schools heard pessimistic financial forecasts about the long-term economic impacts of the coronavirus pandemic.

Dr. Gabe Edgar, assistant superintendent of business and operations, briefed the board of education. In his presentation, Edgar said adjustments can be made to balance the district’s finances for Fiscal Year 2021, but starting with FY 2022 and going forward, the financial picture could be problematic.

The situation also could worsen before that time, as the governor’s office could order emergency budget restrictions for K-12 education at any point. Those restrictions are single-shot acts by Gov. Mike Parson to withhold state funding to deal with the slew of previously unforeseen state budget shortfalls that have been triggered by COVID-19. They will not be carried over into the coming fiscal year.

Parson recently estimated that hundreds of millions of dollars more in statewide budget restrictions could be necessary in the months to come. Edgar said, and a St. Joseph School District spokesperson confirmed on Tuesday, that the restrictions so far amount to a $219,000 loss in state funding for the month of May, and a larger cut is expected for June.

Yet those are cuts that are well understood right now, and the path to dealing with them is likewise certain. The future is much more uncertain, especially if Parson follows up, as the governor has indicated will likely occur, with cuts from FY 2021 that boil down to losses in state aid for school districts.

Last year, Edgar explained, the district budgeted for a situation in which 96% of local property taxpayers met their obligations. This year, he said, it is best to prepare for a situation where no more than 90% of taxpayers are able to avoid delinquency because of the economic situation, which could deprive the district of cash it ordinarily is able to count on.

Edgar warned that district leaders, who have become accustomed to making difficult decisions on the fly, should be prepared to continue in that vein as they make calls about how to make up for financial holes. He emphasized that for the immediate future, savings likely can be found by attrition and efforts to eliminate expenses without cutting jobs. For the more distant future, he said, the budget process will be a “guessing game.”

“This guessing game, it’s been pretty hard,” he said. “What’s that little machine with the red and green and blue, where you had to hit it, like red red red. ‘Simon Says’? Yeah, Simon. Well, Simon’s getting pretty tough right now.”

Dr. Doug Van Zyl, superintendent of schools, complemented Edgar’s presentation with his own assessment of how state funding levels are likely to make a significant difference. The federal government could possibly assuage some of the pain with increased emergency relief of the kind that has been distributed via legislation like the Coronavirus Aid, Relief and Economic Security Act (CARES), which was signed into law by President Donald Trump in late March.

But that’s not something prudent budget planners can count on.

“As I’ve shared with you, (the state) funding stream is drying up,” Van Zyl said. “Unless the feds come up with a bunch of money, nobody knows how much revenue’s coming from the state. They’re struggling, and they’re saying it’s not only this fall ... but probably the next year.”

Anderson Ford in St. Joseph began using its first mobile-vehicle servicing van to accommodate appointments at customers’ homes. The van has been used to check out various vehicle recalls and complete oil changes.

Some businesses have had to change aspects of their normal operations to meet customers’ needs and keep the community safe, including taking services mobile.

Anderson Ford of St. Joseph and Pawsitively Pet Parlor are among those that have taken their most common services mobile to create a better flow and allow more flexibility for customers.

Customers call 816-383-8029 to see if the service they need can be done with the mobile service and then an appointment is made and done without having to come in contact with anyone.

“We can come to their house, do it on their day off or even do it at your work, it doesn’t have to be at your house,” Snapp said. “We’ll come get the keys and you won’t even know we did your car.”

Employees will pull up the history of the vehicle to see if anything else needs to be loaded onto the van beforehand and sanitize the vehicle before and after the appointment.

Snapp hopes in the next year there will be more service vehicles in St. Joseph because it’s simple, convenient and safe for customers.

“We’ve gotten so accustomed to getting our food and groceries delivered to us right now and now you can get your service delivered,” Snapp said.

Amy Beaty, owner of Pawsitively Pet Parlor, decided to take the most popular service her business was providing, nail trimming, and make it mobile.

“We knew we wouldn’t be able to do walk-in nail trimmings, but we did attempt to do a drive-through service a couple times, but because it was so popular we were not able to accommodate that many vehicles in the time frame scheduled,” Beaty said.

“It’s such a common service for both vets and groomers, and right now because of a lot of the restrictions and safety stuff it’s just not doable so it has caught on pretty quick,” Beaty said.

In addition to her home visits, Beaty still is offering drive-through nail trimmings from 5 to 6 p.m. on Thursdays at UPCO, located at 3705 Pear St. The first Thursday included getting through 39 dogs in the hour.

In order to continue limiting foot traffic inside, Pawsitively Pet Parlor will stay with curbside drop-off and pick-up for services outside of nail trimmings.

If the count counts, St. Joseph still has a way to go in proving its population to the federal government.

Still, city residents have done about as well as the nation overall in responding to Census 2020 questionnaires.

Eight weeks have passed since April 1, the official Census Day, and 60.1% of St. Joseph households have responded to the constitutionally mandated population count. This is the same percentage as the United States response rate.

However, among population groups of similar size in Missouri, St. Joseph ranks last in responses.

Missouri, with 60.4% response, ranks 23rd among the states. Buchanan County, at a 60.6% response rate, ranks tied for 1,059th among 3,215 American counties and other territorial and tribal population subdivisions.

Last September, Missouri Gov. Mike Parson put in place a state Complete Count Committee, a panel to raise awareness about the importance of getting all Missourians accounted for with the U.S. Census Bureau.

In addition to the provision in the U.S. Constitution calling for a decennial population count (Article 1, Section 2) and the subsequent use of those numbers to determine legislative representation, the census information creates formulas for distribution of federal money sent from the states to Washington.

“For every adult and every child that is not counted in the census, our state will lose $1,300 in federal dollars every year,” the committee noted in its formation. “When every Missourian is counted, we get more money for roads and bridges, hospitals and schools.”

Mary Robertson, St. Joseph communications and public relations manager, said Tuesday that the importance of an accurate count has particular relevance now as the city deals with the coronavirus pandemic.

“Those very services, we’re being able to provide through funding from the federal government, which is allocated based on census counts,” she said.

Robertson said that social media, not a major communications force in the 2010 census, has been useful in getting out information this time around. But she added, “COVID-19 has pretty much offset everything that we’re doing ... census is not a priority right now for folks.”

Timetables have been extended for this census because of the pandemic, with field operations restarting in some parts of the country and the boots-on-the-ground enumeration still to come. Robertson said local responses can still climb.

“It’s not too late to respond, and it’s still very critical to respond,” she said.

The census questionnaire has a dozen questions. Areas in the northeastern and eastern parts of St. Joseph have the best response rates.

Census Tract 2, an area generally west of Belt Highway from the north county line down to Gene Field Road, has 1,861 households, according to 2018 census estimates. It has the top local response rate at 77.8%.

Tract 7.01, roughly the area of Stonecrest and Missouri Western State University, with 1,650 households, has a 74.1% return.

On the other end of the scale, Tract 10, approximately bounded by 22nd Street on the east and Frederick Boulevard and Messanie Street north and south, has a 36.6% response rate.

Households that have yet to answer the 12 questions on the Census 2020 questionnaire can do so by going to the website my2020census.gov.

Missouri recorded 12,291 cases of COVID-19 on Tuesday, according to the Missouri Department of Health and Senior Services. The number of cases is up by 124 from 12,167 on Monday, resulting in a 1% increase.

In Buchanan County, 640 people have tested positive for the virus as of Tuesday, according to the Missouri Department of Health and Senior Services.

Mosaic Life Care has issued 5,113 tests in its service area, with 270 returning a positive result, 4,791 a negative result and 52 still pending. Sixteen people are inpatients in St. Joseph.

Kansas recorded 9,218 cases of COVID-19 on Monday, up from 8,958 on Friday. A total of 188 people have died. The Kansas Department of Health announced it is ending daily reporting and instead will release numbers on Mondays, Wednesdays and Fridays. 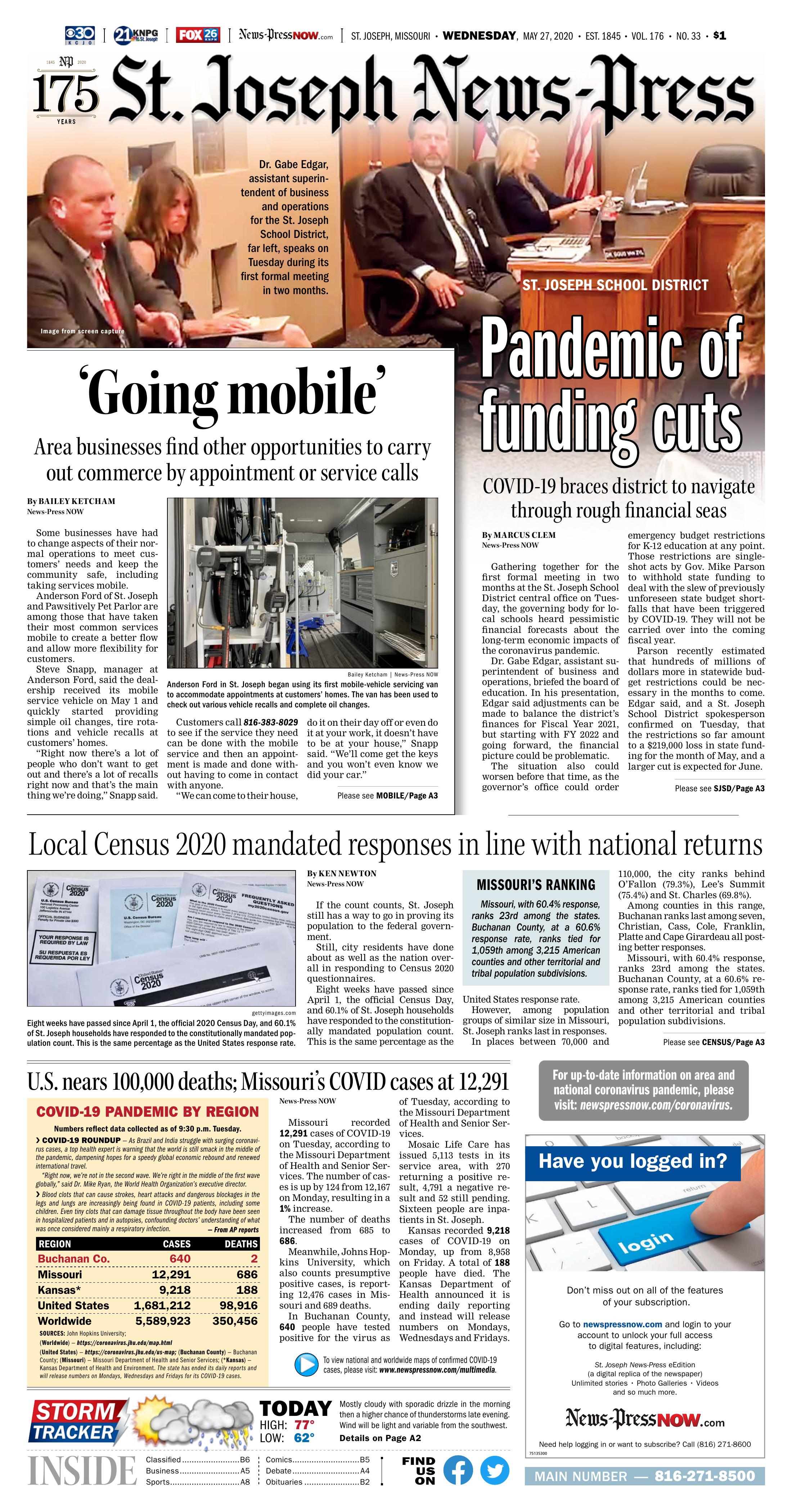