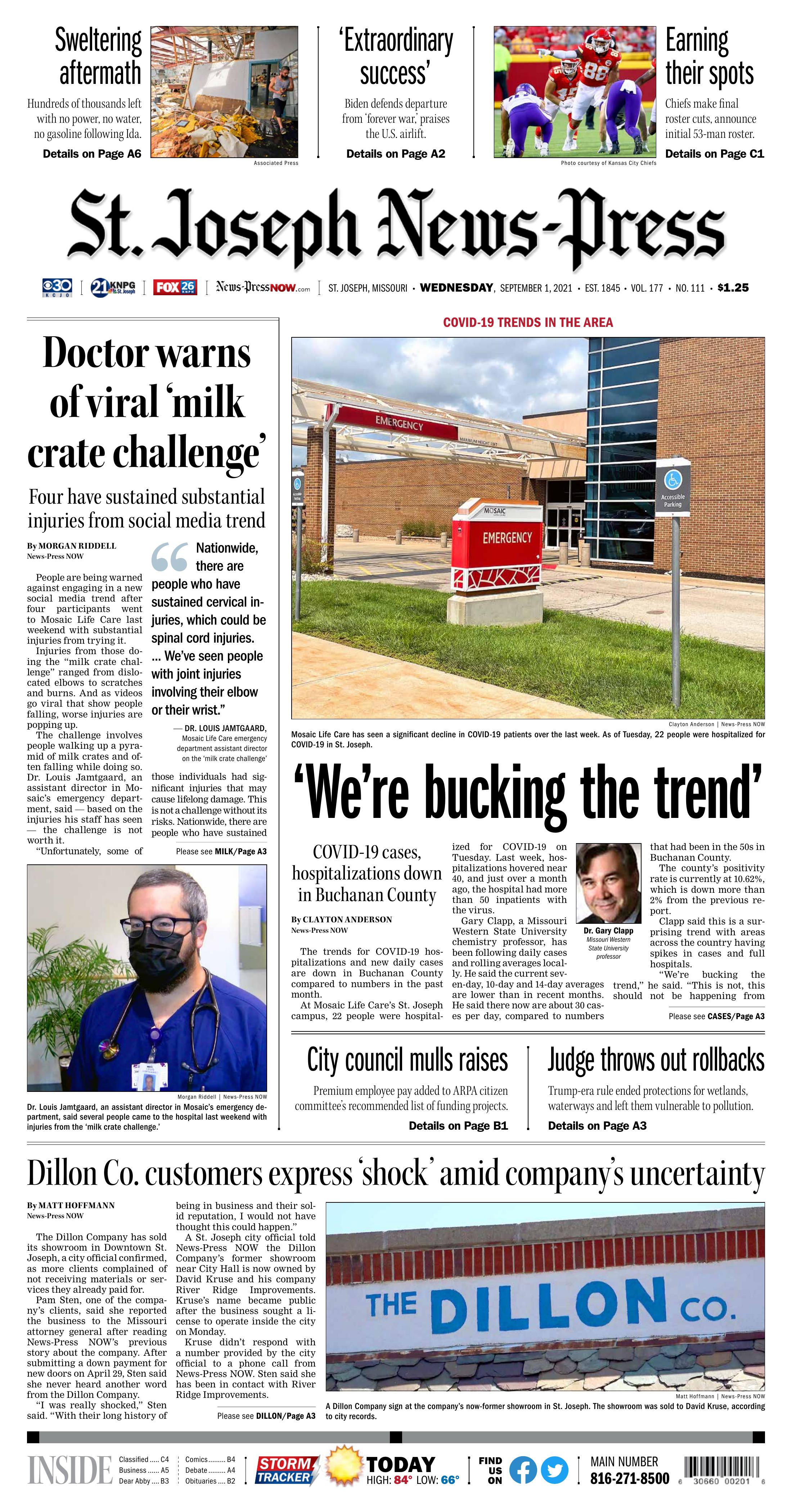 Mosaic Life Care has seen a significant decline in COVID-19 patients over the last week. As of Tuesday, 22 people were hospitalized for COVID-19 in St. Joseph.

The trends for COVID-19 hospitalizations and new daily cases are down in Buchanan County compared to numbers in the past month.

At Mosaic Life Care’s St. Joseph campus, 22 people were hospitalized for COVID-19 on Tuesday. Last week, hospitalizations hovered near 40, and just over a month ago, the hospital had more than 50 inpatients with the virus.

Gary Clapp, a Missouri Western State University chemistry professor, has been following daily cases and rolling averages locally. He said the current seven-day, 10-day and 14-day averages are lower than in recent months. He said there now are about 30 cases per day, compared to numbers that had been in the 50s in Buchanan County.

The county’s positivity rate is currently at 10.62%, which is down more than 2% from the previous report.

Clapp said this is a surprising trend with areas across the country having spikes in cases and full hospitals.

“We’re bucking the trend,” he said. “This is not, this should not be happening from what we’re seeing in other parts of the country, which have higher vaccine rates and yet people are ending up in the hospital.”

“With the low vaccine rates, I don’t have a direct understanding of (declining cases) unless it raged through us already,” Clapp said.

Clapp said he understands the mask mandate for the St. Joseph School District is controversial but said he believes it is probably smart to have people masked when in close quarters. With schools back in session, the masks can be helpful in ensuring a spike of COVID-19 does not reemerge, he said.

“School only started for elementary and secondary schools a week and two days ago, so if (the delta variant) is working its way through the population, we should see an increase the end of this week,” Clapp said.

A Dillon Company sign at the company’s now-former showroom in St. Joseph. The showroom was sold to David Kruse, according to city records.

The Dillon Company has sold its showroom in Downtown St. Joseph, a city official confirmed, as more clients complained of not receiving materials or services they already paid for.

Pam Sten, one of the company’s clients, said she reported the business to the Missouri attorney general after reading News-Press NOW’s previous story about the company. After submitting a down payment for new doors on April 29, Sten said she never heard another word from the Dillon Company.

“I was really shocked,” Sten said. “With their long history of being in business and their solid reputation, I would not have thought this could happen.”

A St. Joseph city official told News-Press NOW the Dillon Company’s former showroom near City Hall is now owned by David Kruse and his company River Ridge Improvements. Kruse’s name became public after the business sought a license to operate inside the city on Monday.

Kruse didn’t respond with a number provided by the city official to a phone call from News-Press NOW. Sten said she has been in contact with River Ridge Improvements.

“(A salesperson) explained to me that River Ridge is interested in establishing a relationship with the St. Joseph community, and that they wanted to honor the contracts that the Dillon Company had with the community,” said Sten.

Chris Bennett took ownership of the Dillon Company in 2018 after a sale from the previous owner, Pat Dillon. Missouri Secretary of State records confirm the sale.

Bennett hasn’t responded to multiple requests for comment about the disaffected customers. A News-Press NOW reporter left a note on his home last week, and that note was gone the next morning. Several phone calls also were not returned, including a call on Tuesday. Sten told News-Press NOW she hadn’t heard from Bennett after her deposit in the spring.

According to Sten’s complaint filed with the Missouri attorney general and an interview, Sten believed the delay in installing her doors from April until August was due to supply chain issues. After she saw other customers were complaining about not receiving services already paid for, she complained.

Previously, News-Press NOW spoke with two other clients who paid for various remodels to their home. In one case, Charles Daniel paid the Dillon Company some $24,000 for a bathroom remodel. He never received any work and still must pay the loan he took out to fund the project.

In another case, Elaine Stoll last heard from the Dillon Company on Aug. 11. She told News-Press NOW that she paid $7,000, some of which was to be used for materials she never received.

People are being warned against engaging in a new social media trend after four participants went to Mosaic Life Care last weekend with substantial injuries from trying it.

Injuries from those doing the “milk crate challenge” ranged from dislocated elbows to scratches and burns. And as videos go viral that show people falling, worse injuries are popping up.

The challenge involves people walking up a pyramid of milk crates and often falling while doing so. Dr. Louis Jamtgaard, an assistant director in Mosaic’s emergency department, said — based on the injuries his staff has seen — the challenge is not worth it.

“Unfortunately, some of those individuals had significant injuries that may cause lifelong damage. This is not a challenge without its risks. Nationwide, there are people who have sustained cervical injuries, which could be spinal cord injuries. The ones we’ve seen, we’ve seen people with joint injuries involving their elbow or their wrist,” he said. “I don’t know much about what exactly the purpose of it is, but I know it’s pretty dangerous.”

Jamtgaard said an influx of patients to the emergency room suffering from milk crate challenge injuries like they saw on Sunday is hurting staff there as they continue to fight COVID-19.

“Right now, I’m treating several COVID patients. We have limited resources with nursing and beds. Shortages are nationwide. Every additional trauma or individual, they require treatment from nurses and physicians to expend resources,” he said. “So when you take that risk, not only do you injure yourself, but you could be displacing another individual who could be receiving care here. So ... additional patient load is unnecessary, and I’d highly recommend against doing (the challenge.)”

Jamtgaard said he suggests parents speak with their kids about the dangers of the challenge, especially if it is something their peers are doing.

COVID-19 TRENDING DOWN IN BUCHANAN COUNTY