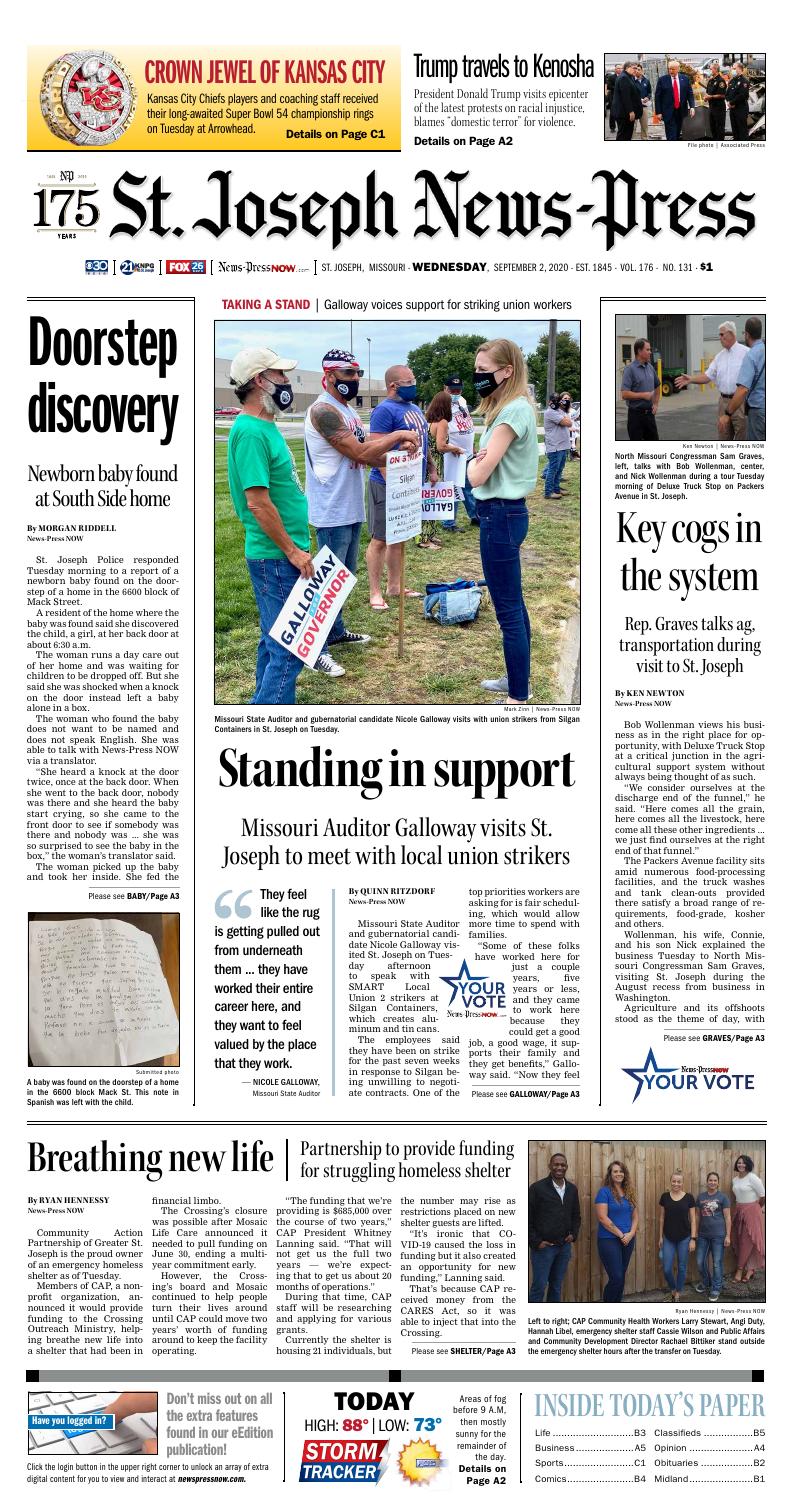 Missouri State Auditor and gubernatorial candidate Nicole Galloway speaks with a union worker, who is on strike, at Silgan Containers, .

The employees said they have been on strike for the past seven weeks in response to Silgan being unwilling to negotiate contracts. One of the top priorities workers are asking for is fair scheduling, which would allow more time to spend with families.

“Some of these folks have worked here for just a couple years, five years or less, and they came to work here because they could get a good job, a good wage, it supports their family and they get benefits,” Galloway said. “Now they feel like the rug is getting pulled out from underneath them.”

“I’ve also visited with some folks out here that have been working here for over 40 years. This means something to them because they have worked their entire career here, and they want to feel valued by the place that they work. What’s going on right here with this company, they’re not seeing that value.”

“These are the folks that make our economy work,” Galloway said. “All the materials that we use, from our cars to cans to what we buy in the store, they are built by these working people, and they deserve our support.”

Strikers didn’t just receive support from Galloway. Throughout the afternoon, commercial trucks and other workers from the nearby factories honked their horns in support.

These workers said they are proud to be a part of such a close group. They also said they were grateful for the support they have received from the community and other local unions.

“Unions are the backbone of the middle class,” Galloway said. “My family worked their way into the middle class with the support they had from a union and I am proud of that. So these fights that these guys and gals out on this line, what they’re fighting for, that is personal to me and impacts my family.”

Galloway asks that Silgan comes to the table to sit down with these workers.

Silgan Containers was unable to be reached for comment Tuesday evening.

A baby was found on the doorstep of a home in the 6600 block Mack St. This note in Spanish was left with the child.

St. Joseph Police responded Tuesday morning to a report of a newborn baby found on the doorstep of a home in the 6600 block of Mack Street.

A resident of the home where the baby was found said she discovered the child, a girl, at her back door at about 6:30 a.m.

The woman runs a day care out of her home and was waiting for children to be dropped off. But she said she was shocked when a knock on the door instead left a baby alone in a box.

The woman who found the baby does not want to be named and does not speak English. She was able to talk with News-Press NOW via a translator.

The woman picked up the baby and took her inside. She fed the baby and called the police. The baby was taken to Mosaic Life Care.

“(She) said the baby, she looked very good (she) made two ounces of formula she said the baby looked good ... the umbilical cord was just cut off and was there, but the baby she looked OK, she was in good condition,” the translator said.

There was a note written in Spanish left with the newborn, asking that the woman at the house care for the baby. Parts of the letter translated read:

A “safe haven” option for new or expecting parents does exist without prosecution in Missouri, but there are conditions. The baby must be under 45 days old, be dropped at a designated location and be directly handed to a qualified person.

“There’s a Missouri safe-place to newborns law and it allows for newborns up to 45 days old to be taken to those locations and those include a fire station, EMT, law enforcement, police stations, hospitals and places like pregnancy centers,” Libby Owens, executive director of the St. Joseph Pregnancy Resource Center, said.

There are resources for expecting parents through the Pregnancy Resource Clinic. Parents who can’t care for an infant also can look for signs indicating a safe haven at any fire station in town.

The child found Tuesday morning currently is being treated at the hospital and the children’s division of the Missouri Department of Social Services is involved. An investigation in the case is underway.

Bob Wollenman views his business as in the right place for opportunity, Deluxe Truck Stop at a critical junction in the agricultural support system without always being thought of as such.

The Packers Avenue facility sits amid numerous food-processing facilities, and the truck washes and tank clean-outs provided there satisfy a broad range of requirements, food-grade, kosher and others.

Wollenman, his wife, Connie, and his son Nick explained the business Tuesday to North Missouri Congressman Sam Graves, visiting St. Joseph during the August recess from business in Washington.

Agriculture and its offshoots stood as the theme of day, with Graves also gathering with farmers from the region and visiting the St. Joseph port.

Graves serves as the top-ranking Republican on the House Transportation and Infrastructure Committee. The tour of the trucking facility, which has 44 employees and has undertaken more than $1 million in capital improvements since last year, spoke to the lawmaker about the needs of the industry.

"No matter if something travels by rail or ship or barge or pipeline, ultimately it has to get on a truck and go to the final destination," the lawmaker said.

Members of Congress return to Washington after the August recess for three weeks of work before shutting down again for a pre-election period. Many items, including those related to the coronavirus, will occupy the agenda, but one will get a lot of Graves' attention.

"We've got an issue too when it comes to the reauthorization of the surface transportation bill," he said. "That's wrapped up in Infrastructure right now, but we have to do something in regards to that before Sept. 30. That's when the deadline comes up."

With the 6th Congressional District stretching across the top of Missouri, Graves has two of the nation's largest rivers, the Missouri and Mississippi, as part of his representation. The port facility in St. Joseph has been a long-range project and has become "a great asset" for the city, he said.

"It's just another opportunity ... for shipping product both in and out. And so anytime you can do that, it spurs competition and allows for cheaper shipping, which is good for customers and consumers all over the country," Graves said.

"We've seen the port here in St. Joe, it's adjusted and shifted and had to do that as a result of, obviously, navigation issues on the Missouri River and particularly this far north. But they've adapted and adapted well."

Wollenman said he appreciated the visit by the congressman.

"When Sam comes, being from the agricultural background that he's from, he recognizes us as an integral part of what goes on in Northwest Missouri and Northeast Kansas," the businessman said.

Graves, first elected to the House in 2000, is seeking another term in the November election.

Community Action Partnership of Greater St. Joseph is the proud owner of an emergency homeless shelter as of Tuesday.

Members of CAP, a non-profit organization, announced it would provide funding to the Crossing Outreach Ministry, helping breathe new life into a shelter that had been in financial limbo.

The Crossing’s closure was possible after Mosaic Life Care announced it needed to pull funding on June 30, ending a multi-year commitment early.

However, the Crossing’s board and Mosaic continued to help people turn their lives around until CAP could move two years’ worth of funding around to keep the facility operating.

“The funding that we’re providing is $685,000 over the course of two years,” CAP President Whitney Lanning said. “That will not get us the full two years — we’re expecting that to get us about 20 months of operations.”

During that time, CAP staff will be researching and applying for various grants.

Currently the shelter is housing 21 individuals, but the number may rise as restrictions placed on new shelter guests are lifted.

“It’s ironic that COVID-19 caused the loss in funding but it also created an opportunity for new funding,” Lanning said.

That’s because CAP received money from the CARES Act, so it was able to inject that into the Crossing.

Rachael Bittiker handles many of the homeless initiatives at CAP as its director of public affairs and community development.

“We’re going to be able to bring in resources to where they are right at the shelter to help with employment, and income, and IDs and birth certificates,” Bittiker said.

Prior to taking over the emergency shelter, CAP implemented a work program so homeless individuals could earn above minimum wage to clean up St. Joseph. The organization also has had a community health worker working at the facility for the past year. On Tuesday, it added another health worker and a supervisor to the operation.

“It’s basically showing someone a new way and how to break the cycle of poverty,” Bittiker said.

Bittiker added that people living at the shelter could qualify to live in one of the tiny homes CAP plans to develop over the next year. A couple of those qualifications would include being able to afford the rent and also abiding by the community’s rules.

CAP is seeking a partner to help them provide breakfast throughout the week. If you are interested in helping contact Rachael Bittiker at rbittiker@capstjoe.org 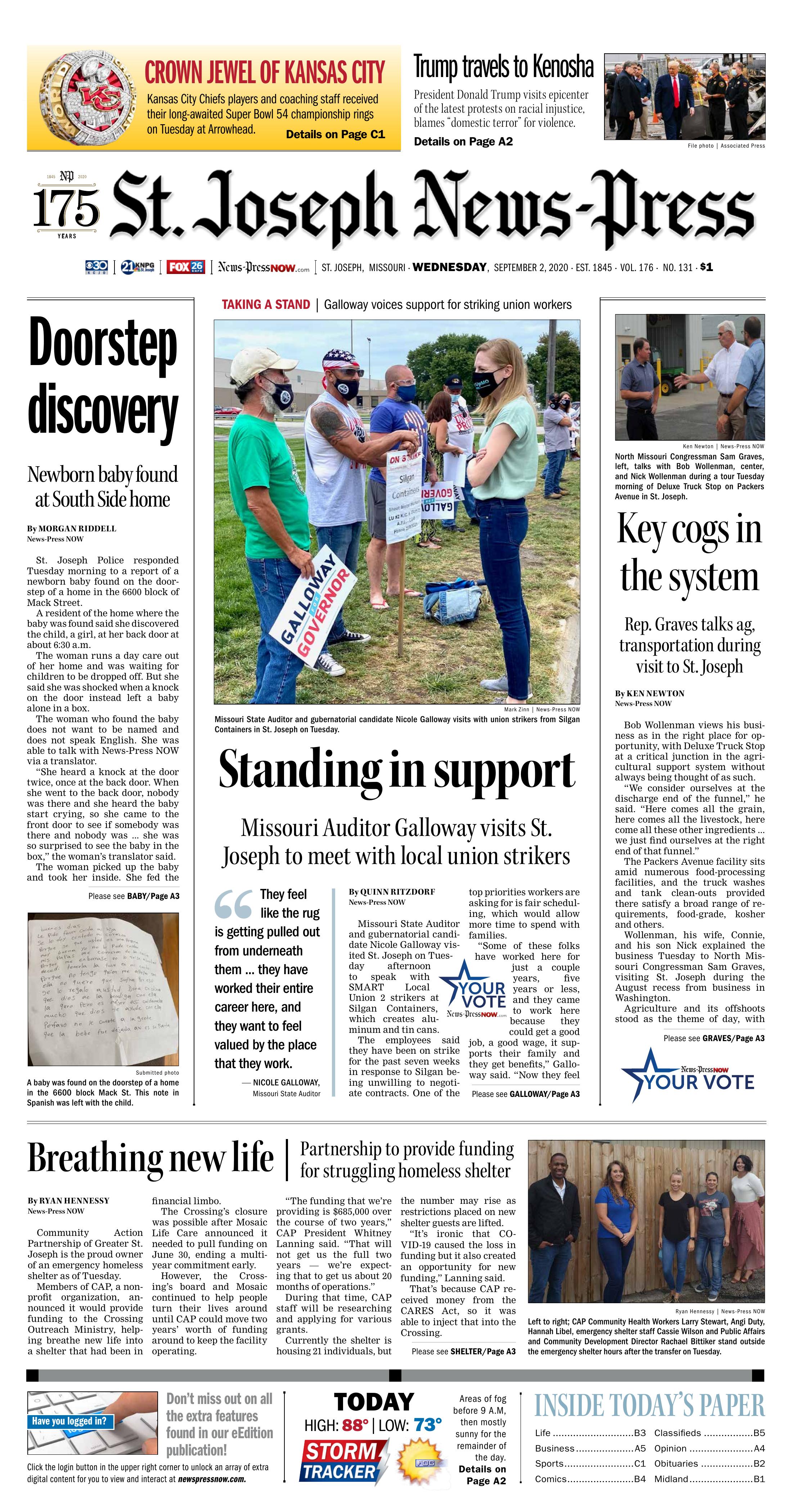