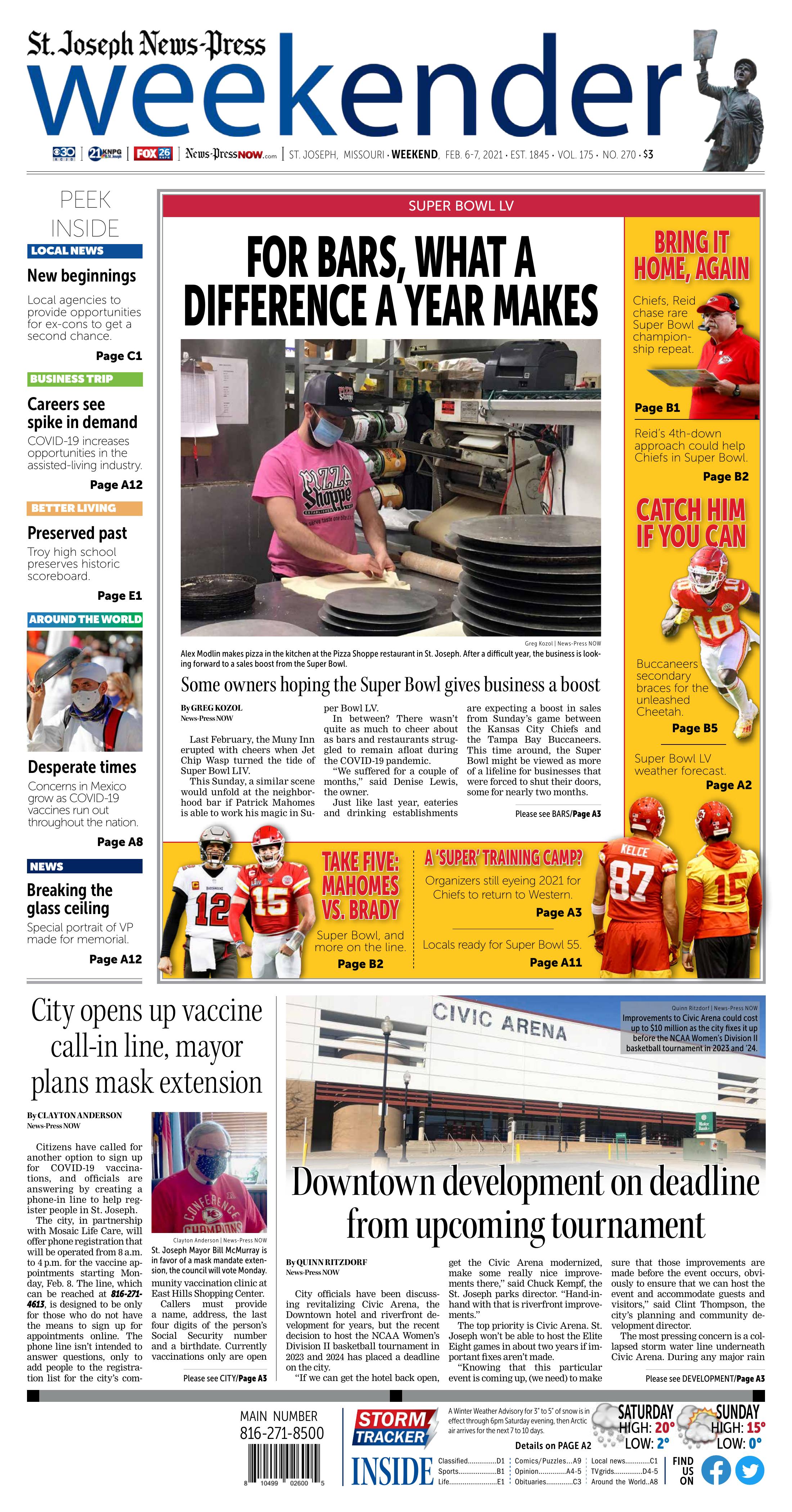 Alex Modlin makes pizza in the kitchen at the Pizza Shoppe restaurant in St. Joseph. After a difficult year, the business is looking forward to a sales boost from the Super Bowl.

This Sunday, a similar scene would unfold at the neighborhood bar if Patrick Mahomes is able to work his magic in Super Bowl LV.

In between? There wasn’t quite as much to cheer about as bars and restaurants struggled to remain afloat during the COVID-19 pandemic.

“We suffered for a couple of months,” said Denise Lewis, the owner.

Just like last year, eateries and drinking establishments are expecting a boost in sales from Sunday’s game between the Kansas City Chiefs and the Tampa Bay Buccaneers. This time around, the Super Bowl might be viewed as more of a lifeline for businesses that were forced to shut their doors, some for nearly two months.

“Everyone’s business took a hit,” said Ridge Morgan, owner of Norty’s. “I am hoping this catapults us and jump starts us for the year.”

A lot has happened in between the last two Super Bowls. Ridge remembers a good crowd for last year’s game, played at a time when the coronavirus was still a story lingering in the background. Three months later, bars in St. Joseph were among the last non-essential businesses allowed to reopen following a citywide shelter-in-place order issued in late March.

“We got through it,” Morgan said. “That kind of stung.”

Bars like Norty’s and Muny Inn, as well as restaurants that also plan to do a brisk business Sunday, can count themselves as survivors. The National Restaurant Association estimates that 17% of restaurants have closed, many of them family owned establishments.

“Restaurants are break-even and just kind of getting by,” said Bill Teel, executive director of the Greater Kansas City Restaurant Association. “Those that adapt and do more curbside do better.”

The U.S. Centers for Disease Control and Prevention issues guidance on the operation of bars and restaurants, including the wearing of masks, keeping tables 6 feet apart and placing barriers at cash registers. More specific restrictions are up to state and local authorities.

In St. Joseph, the latest emergency order sought to limit the spread of COVID-19 at bars and restaurants without resorting to business closures or limiting capacity and hours of operation. The city requires 6 feet of social distancing and face coverings for anyone who is not part of the same household, except while eating and drinking. There is no medical exemption for wearing a mask in a bar or restaurant.

Lewis, at the Muny Inn, said she’s expecting a larger crowd for this year’s Super Bowl, so she’s focused on complying with health requirements while trying to provide a gathering place for customers who are starved for a sense of community.

“It’s a chance to get together with your family and friends,” she said. “That matters to a lot of people.”

Some are hoping that this year’s Super Bowl marks a turnaround, sort of the business equivalent of Mahomes connecting with Tyreek Hill on a third and 15. Pizza Shoppe, a restaurant on the Belt Highway, won’t be open Sunday evening but plans to do pizza deliveries up until 5 p.m. for private watch parties.

After a difficult period in 2020, initial interest offers a sign of encouragement for Pizza Shoppe.

“The Super Bowl is actually coming at a really great time,” said Paige Mazur, general manager of Pizza Shoppe. “We’ve already begun to pick up our business. COVID was definitely a weird year for everybody.”

Improvements to Civic Arena could cost up to $10 million as the city fixes it up before the NCAA Women’s Division II basketball tournament in 2023 and ‘24.

The vacant hotel downtown is the only one in the area, which isn’t ideal for hosting events at Civic Arena. But a company recently bought the building and plans on opening it in 2022.

The riverfront development would add additional amenities and activities to downtown. While some of the projects on the riverfront are almost complete, many will take years to finish.

City officials have been discussing revitalizing Civic Arena, the Downtown hotel and riverfront development for years, but the recent decision to host the NCAA Women’s Division II basketball tournament in 2023 and 2024 has placed a deadline on the city.

“If we can get the hotel back open, get the Civic Arena modernized, make some really nice improvements there,” said Chuck Kempf, the St. Joseph parks director. “Hand-in-hand with that is riverfront improvements.”

The top priority is Civic Arena. St. Joseph won’t be able to host the Elite Eight games in about two years if important fixes aren’t made.

“Knowing that this particular event is coming up, (we need) to make sure that those improvements are made before the event occurs, obviously to ensure that we can host the event and accommodate guests and visitors,” said Clint Thompson, the city’s planning and community development director.

The most pressing concern is a collapsed storm water line underneath Civic Arena. During any major rain storm, water collects in the building. Aside from structural fixes, Kempf mentioned a laundry list of aesthetic improvements: New lighting, seating, restrooms, scoreboard and technology. He also said modernizing the building’s facade would help.

“It’s concrete, metal and plastic, you can’t change that a whole lot, but there are some things that we could do to soften that up just a little bit to make it a little more of an inviting environment,” Kempf said.

All these improvements would cost a “huge number.” But Kempf said anywhere between $5 to $10 million would significantly improve the arena. With these funds, he said the building would be ready in time for the basketball tournament.

But it’s hard to hold any large events without a nearby hotel. The Red Lion Hotel, the only one Downtown, closed in 2019 and has sat vacant since.

“We need that hotel,” Kempf said. “There are certain events that have to have that element to be successful. That’s really critical for us to have that partnership. It’s not really a financial partnership, but it’s a neighboring partnership. We really need that.”

The hotel was recently bought by HDDA, which plans to refurbish and open it in 2022.

“We sure want to have that hotel operational, then we don’t want to have to shuttle people away from the Downtown,” said St. Joseph Mayor Bill McMurray.

Additional amenities also would revitalize the area, especially the riverfront development. The master plan includes three steps. The first is the River Bluff Trail, which is to be completed this year. An RV park is also part of the plan that is expected to be done soon, too.

Another project, Robidoux Landing, has been delayed as the city decides how to move forward with the Interstate 229 bridge.

The cost of the entire plan is about $90 million, with both private investment and public assistance. Public funding for the project is about $25 million.

“The city’s position in trying to encourage the revitalization of the riverfront is to stimulate private investment with public assistance,” Thompson said. “It’s a long-term plan. We anticipate once there’s a couple activities that kickoff within the area that’ll help attract other private investment.”

While some parts of the plan should be completed by the tournament, a full revitalization of the riverfront will take much longer.

“We as a city have to market our opportunities, as we are competing against other cities, regionally, for the same types of events,” Thompson said. “How do we attract these events to consider St. Joseph as a location, one based on meeting and event size? How many hotel rooms do you have within close proximity? What do you have to entertain those residents who are experiencing, attending an event or those who are visiting St. Joseph?”

Right now, the answers to those questions are slim. However, the Downtown development of Civic Arena, the hotel and the riverfront development will help. And now because of the women’s basketball tournament, the clock is ticking, and the city will have to beat the buzzer.

“The Civic Arena becomes a really attractive venue with those elements around it,” Kempf said. “The business community benefits from it. Downtown’s already improving, and I think that just kind of gives it a little boost.”

St. Joseph Mayor Bill McMurray is in favor of a mask mandate extension, the council will vote Monday.

Citizens have called for another option to sign up for COVID-19 vaccinations, and officials are answering by creating a phone-in line to help register people in St. Joseph.

The city, in partnership with Mosaic Life Care, will offer phone registration that will be operated from 8 a.m. to 4 p.m. for the vaccine appointments starting Monday, Feb. 8. The line, which can be reached at 816-271-4613, is designed to be only for those who do not have the means to sign up for appointments online. The phone line isn’t intended to answer questions, only to add people to the registration list for the city’s community vaccination clinic at East Hills Shopping Center.

Callers must provide a name, address, the last four digits of the person’s Social Security number and a birthdate. Currently vaccinations only are open to those who are 65 and older or who have high-risk health complications.

Even with increased vaccinations, COVID-19 mitigation remains a top priority for St. Joseph Mayor Bill McMurray. He said medical experts have asked for a 120-day mask mandate extension, which will be voted on by the St. Joseph City Council Monday.

McMurray said he knows four council members agree regarding the 120-day extension, while potentially three others would want a 60-day addition to the current mandate, which is set to expire Sunday, Feb. 14. Two remaining council members are for the removal of the mask mandate, he said.

McMurray said he is encouraged about the downward trend in COVID hospitalization numbers. Currently there are 27 people hospitalized with the illness at Mosaic’s St. Joseph campus. Positive cases per day also have been going down, but McMurray said he believes the mask mandate needs to stay in place until potentially early summer.

“We’re making some good progress, but we’re not out of the woods yet,” McMurray said.

An extension of 60 or 120 days would bring the community well in to spring or even early summer, which would give time for more people to get vaccinated, the mayor said. Buchanan County is currently at a 5.8% rate of people who have received a first dose of a COVID vaccine.

“Don’t run around without a mask on ... try to protect yourself and others and we’re almost there,” McMurray said. “I think maybe I am hoping by the summer that that will be the point where we can say ‘All right, let’s relax.’”

The council and the mayor receive graphs with 14-, 10- and seven-day rolling averages pf COVID cases. The seven-day average is starting to flatten out, but all graphs signify a downward trend in daily cases.

“Take it easy on the Super Bowl parties. I’m gonna stay home, I understand some of you younger people want to go out, but wear the mask and try to socially distance and let’s just get through this thing here,” McMurray said.