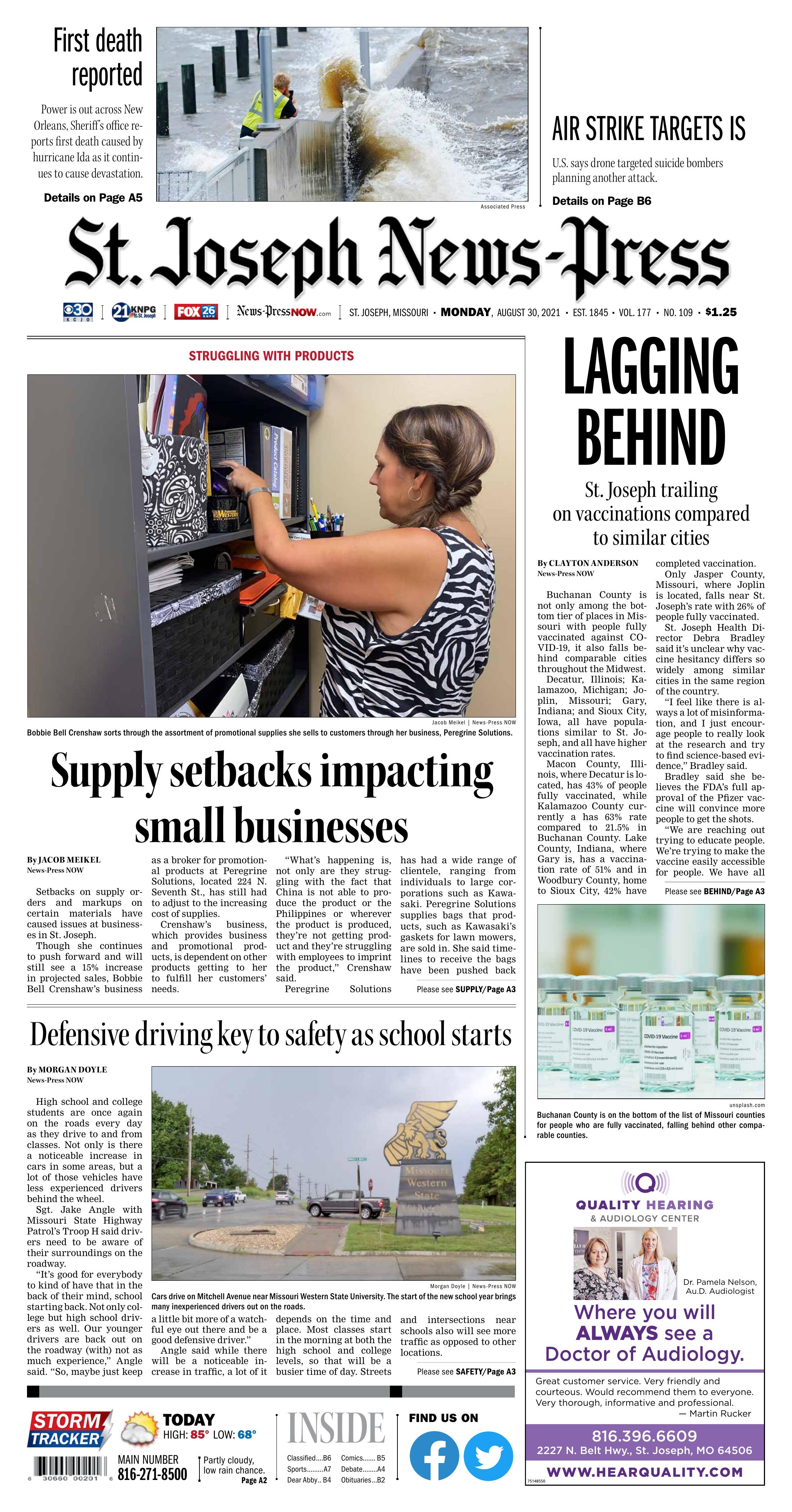 Bobbie Bell Crenshaw sorts through the assortment of promotional supplies she sells to customers through her business, Peregrine Solutions.

Setbacks on supply orders and markups on certain materials have caused issues at businesses in St. Joseph.

Though she continues to push forward and will still see a 15% increase in projected sales, Bobbie Bell Crenshaw’s business as a broker for promotional products at Peregrine Solutions, located 224 N. Seventh St., has still had to adjust to the increasing cost of supplies.

Crenshaw’s business, which provides business and promotional products, is dependent on other products getting to her to fulfill her customers’ needs.

Crenshaw said March is when she noticed products starting to take much longer to be received, and she can’t forecast how long products, mostly plastic products, are going to be delayed. In the 20-plus years she has been brokering promotional products, she has never said it’s not her fault when a customer’s needs are not met, regardless of whether manufacturers can do their part in a customer’s ordering process.

“It ultimately is my fault because you trusted me,” Crenshaw said. “I hate not being able to fill their needs. There’s just nothing else I can do about it.”

Peregrine Solutions has had to mark up the price on products based on cost hikes on products that are being shipped in from manufacturers.

“As I see an increase, I pass that along,” Crenshaw said. “But I have a set markup that I always charge on my products so that when my cost has increased, I just continue to pass on the same markup that I’ve always had. I’ve been very fortunate no one has questioned the markups.”

Crenshaw still sits comfortably in her position as a middle man for customers and manufacturers. She said there’s one thing she’s had to adjust to the most given the circumstances of having products back ordered: losing a lot of business because products are not able to be shipped in as quickly as a customer needs.

“I’ve added a tagline to my emails so everybody sees, ‘turnarounds are just taking longer so you have to plan ahead.’ Of course, I hate not being able to fulfill my customers’ needs,” Crenshaw said.

Buchanan County is on the bottom of the list of Missouri counties for people who are fully vaccinated, falling behind other comparable counties.

Buchanan County is not only among the bottom tier of places in Missouri with people fully vaccinated against COVID-19, it also falls behind comparable cities throughout the Midwest.

Macon County, Illinois, where Decatur is located, has 43% of people fully vaccinated, while Kalamazoo County currently a has 63% rate compared to 21.5% in Buchanan County. Lake County, Indiana, where Gary is, has a vaccination rate of 51% and in Woodbury County, home to Sioux City, 42% have completed vaccination.

Only Jasper County, Missouri, where Joplin is located, falls near St. Joseph’s rate with 26% of people fully vaccinated.

“I feel like there is always a lot of misinformation, and I just encourage people to really look at the research and try to find science-based evidence,” Bradley said.

Bradley said she believes the FDA’s full approval of the Pfizer vaccine will convince more people to get the shots.

“We are reaching out trying to educate people. We’re trying to make the vaccine easily accessible for people. We have all the pharmacies in town who are providing it,” Bradley said. “It just comes down to people making that decision for themselves.”

Marisa Hosier, a spokeswoman for the Macon County, Illinois, Health Department, said one of the main strategies her agency has used is meeting people where they are by going out to the community and having Wednesday walk-in clinics.

“We held a panel with local medical experts who were willing to discuss the vaccine and specifically vaccinating children and then shared it to the community,” Hosier said.

Hosier said Macon County ranks at No. 42 out of Illinois’ 102 counties for full COVID-19 vaccination. She said she thinks they encounter the same barriers to getting people vaccinated in her county that take place across the nation.

“I still encourage people to talk to their family and friends who received the vaccine to find out how they responded to the vaccine and what they did to help it make themselves feel better,” she said.

Cars drive on Mitchell Avenue near Missouri Western State University. The start of the new school year brings many inexperienced drivers out on the roads.

High school and college students are once again on the roads every day as they drive to and from classes. Not only is there a noticeable increase in cars in some areas, but a lot of those vehicles have less experienced drivers behind the wheel.

Sgt. Jake Angle with Missouri State Highway Patrol’s Troop H said drivers need to be aware of their surroundings on the roadway.

“It’s good for everybody to kind of have that in the back of their mind, school starting back. Not only college but high school drivers as well. Our younger drivers are back out on the roadway (with) not as much experience,” Angle said. “So, maybe just keep a little bit more of a watchful eye out there and be a good defensive driver.”

Angle said while there will be a noticeable increase in traffic, a lot of it depends on the time and place. Most classes start in the morning at both the high school and college levels, so that will be a busier time of day. Streets and intersections near schools also will see more traffic as opposed to other locations.

Missouri Western brings a large number of drivers to the east side of the city. According to the official fall 2020 Missouri Western Fact Sheet, the university saw 4,911 students enrolled in 2020. Of those, 3,518 were 21 or younger, meaning they’d been fully licensed drivers for five years or less.

And while many of those students come from around St. Joseph and likely are familiar with the area around the college, 1,445 students are from elsewhere and potentially still learning about traffic patterns there.

“The biggest thing for our younger drivers is not giving 100% of our attention to the job of driving,” Angle said. “They’re so connected to their phones and things like that. I think their inattention is a big factor in a lot of crashes when we’re talking about our younger drivers.”

Officials with the Missouri Western Police Department estimate about two-thirds of the student population has cars registered on campus, adding up to about 3,274 younger drivers.

Angle said the best way to be a good defensive driver is to pay attention, wear a seat belt and obey traffic laws.

While younger drivers are usually associated with riskier driving habits, Angle said people of all ages are pulled over and arrested. However, due to their inexperience, he said younger drivers might not have some of the healthy driving habits that seasoned drivers have learned over the years, such as knowing not to overcorrect.

No matter how young or old the driver next to you is, Angle said drivers can’t control anything but their own actions while behind the wheel.

“You can be the best driver in the world, but what can’t you control? You can’t control the other driver,” Angle said. “So, paying attention, buckling up in case maybe that other driver does pull out in front of you, and maybe it can’t be avoided, but you need to put all the odds in your favor to reduce injury and maybe save your lives.”

Angle said if you have a new driver in your family, make sure to teach him or her to give all of their attention to driving, put phones down, obey traffic laws and wear a seat belt.