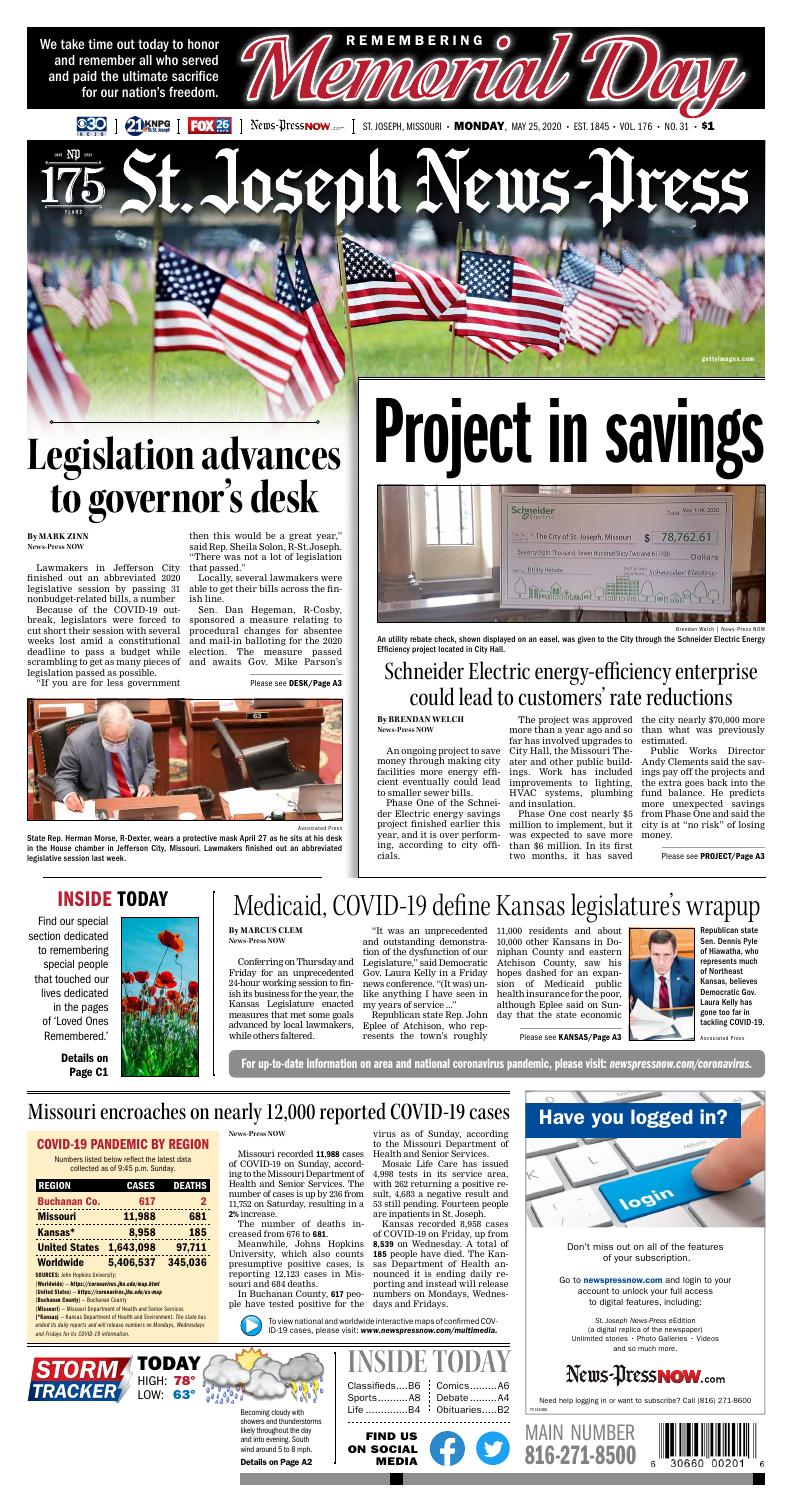 An utility rebate check, shown displayed on an easel, was given to the City through the Schneider Electric Energy Efficiency project located in City Hall.

An ongoing project to save money through making city facilities more energy efficient eventually could lead to smaller sewer bills.

Phase One of the Schneider Electric energy savings project finished earlier this year, and it is over performing, according to city officials.

The project was approved more than a year ago and so far has involved upgrades to City Hall, the Missouri Theater and other public buildings. Work has included improvements to lighting, HVAC systems, plumbing and insulation.

Phase One cost nearly $5 million to implement, but it was expected to save more than $6 million. In its first two months, it has saved the city nearly $70,000 more than what was previously estimated.

Public Works Director Andy Clements said the savings pay off the projects and the extra goes back into the fund balance. He predicts more unexpected savings from Phase One and said the city is at “no risk” of losing money.

“Under the contract if, for some reason, there was a bad guess of what the savings would be, Schneider’s on the hook then to cut a check for the difference for the duration of the contract, which is 15 years,” Clements said.

Last week, the City Council saw a presentation from Schneider Electric’s Peter Hinkle who said the city is on track for big savings. The city also saw a rebate check from utility companies presented by Schneider for more than $78,000.

“Many of them have state-approved programs where, if an owner will make improvements to an energy conservation effort and prove they are done correctly, they will then rebate a certain amount of money,” he said.

Phase Two, which could see an analyzation step begin next month, will involve making energy-friendly upgrades at the water protection facility, which treats all of St. Joseph’s wastewater.

“We’ve been looking for awhile at big energy consumers, like blowers and along those lines, and those have certainly the opportunity, with some new technology, to really make some investments there to save money,” Clements said.

Clements said these upgrades eventually could lead to an decrease in sewer rates as the projects are paid off.

Lawmakers in Jefferson City finished out an abbreviated 2020 legislative session by passing 31 nonbudget-related bills, a number

Because of the COVID-19 outbreak, legislators were forced to cut short their session with several weeks lost amid a constitutional deadline to pass a budget while scrambling to get as many pieces of legislation passed as possible.

“If you are for less government then this would be a great year,” said Rep. Sheila Solon, R-St.Joseph. “There was not a lot of legislation that passed.”

Locally, several lawmakers were able to get their bills across the finish line.

Sen. Dan Hegeman, R-Cosby, sponsored a measure relating to procedural changes for absentee and mail-in balloting for the 2020 election. The measure passed and awaits Gov. Mike Parson’s approval. Hegeman also was able to pass a controversial provision that makes significant changes to a redistricting plan approved by voters in 2018.

Solon was successful in her bid to pass significant reforms to the state’s foster care system. She said the system is in desperate need of improvements, including bringing back a risk-assessment tool for social workers.

“It’s something we used in the past to help social workers know whether children should stay in the home or should be removed,” she said. “It’s something that all of the child-care advocates and experts support.”

Republican Sen. Tony Luetkmeyer saw two pieces of legislation that he ushered through the legislative bodies succeed. Senate bills 600 and 676 both were passed by the Missouri Legislature.

SB 600 enacts a variety of provisions that are aimed at toughing penalties for violent offenders, including increasing sentencing requirements and making it more difficult for certain offenders to get probation.

“I think Senate Bill 600 is going to go a long way to making our communities and our entire state a lot safer place to live,” Luetkemeyer said.

Luetkemeyer’s other successful bill primarily related to property tax assessments, but it also includes a provision that would prevent the state from taxing COVID-19 stimulus checks issued by the federal government.

While not passing as a stand-alone bill, State Rep. Brenda Shields, R-St. Joseph, was able to add an amendment to different bill that would enable first responders impacted by the terrorist attacks of Sept. 11, 2001 to be eligible for tax refunds from the state.

Despite the lower number of bills passed this session, Shields said it was still a successful one.

“It was a very low number (of bills passed), but don’t let that number fool you,” she said. “We passed a lot of legislation.”

Notable items that didn’t make it to the governor’s desk include locally sponsored measures including a prescription drug monitoring database and a bill from Rep. Bill Falkner, R-St. Joseph, that would put in place a framework in which the state could start collecting an online sales tax.

Find our special section dedicated to remembering special people that touched our lives dedicated in the pages of ‘Loved Ones Remembered.’

Conferring on Thursday and Friday for an unprecedented 24-hour working session to finish its business for the year, the Kansas Legislature enacted measures that met some goals advanced by local lawmakers, while others faltered.

“It was an unprecedented and outstanding demonstration of the dysfunction of our Legislature,” said Democratic Gov. Laura Kelly in a Friday news conference. “(It was) unlike anything I have seen in my years of service ...”

Republican state Rep. John Eplee of Atchison, who represents the town’s roughly 11,000 residents and about 10,000 other Kansans in Doniphan County and eastern Atchison County, saw his hopes dashed for an expansion of Medicaid public health insurance for the poor, although Eplee said on Sunday that the state economic situation had changed to the point where Medicaid expansion, for understandable reasons, likely won’t be debated for some time.

“I do think now that it was an impossible reach to try to go forward with Medicaid expansion in this session, with COVID-19 at the same time. It’s just not financially responsible to do that,” Eplee said. “There’s just too much unknown about the costs that are gonna be incurred as relates to COVID-19.”

Eplee had worked extensively with state Senate Majority Leader Jim Denning of Overland Park, a fellow Republican, and Kelly to advance a compromise Medicaid expansion measure. The compromise plan was designed to rely on a cost-share scheme that would have been heavily borne by the federal government and by a surcharge on Kansas hospitals.

The Kansas Hospital Association backed that surcharge to help ensure Kansas, which budgets for just under $20 billion in public expenses as of Fiscal Year 2021, would evade anything more than a nominal share of the Medicaid cost.

Because the compromise plan failed, Kansas will remain one of 14 states that has not expanded Medicaid since such measures were first authorized by the U.S. Patient Protection and Affordable Care Act of 2010, better known as Obamacare. Missouri and Oklahoma also haven’t expanded Medicaid, but a referendum measure that could bring about such reform was certified for the Tuesday, Nov. 3, general election ballot. Iowa expanded Medicaid in 2015; Nebraska followed suit in 2019.

Eplee and fellow Republican Dennis Pyle, a state senator who represents much of Northeast Kansas, voted in favor of legislation that came together within the last week on COVID-19 emergency response.

The plan ultimately made it to the floor on Thursday, the formal Sine Die, “without day,” which refers to how legislative business is not supposed to occur after that day. Notwithstanding that tradition, lawmakers worked all day Thursday, throughout the midnight hours, and continued into late Friday morning to produce House Bill No. 2054.

The bill strips Kelly of unilateral authority to continue Kansas’ state of emergency beyond the end of May, and reduces the impact of her emergency powers in various ways. Under the legislation, Kelly now has to consult with a legislative panel chaired by Wichita Republican Susan Wagle, the president of the Kansas Senate, if there is — as is broadly expected — a determination that emergency measures must continue into June.

As an example of the other reforms, if a business defies a COVID-19 shutdown order in the future, it would face civil penalties, and not the misdemeanor criminal previously authorized by statute.

Kelly has not said if she will sign HB 2054, passed by 27-11 in the Kansas Senate and 76-34 in the Kansas House. If she vetoes it, the situation is not clear. Two thirds of lawmakers in each chamber must vote to override a veto; if each lawmaker who voted in favor of the bill follows up with an override, that effort would likely succeed. But, they would have no such opportunity if Kelly does not call the Legislature back into the session following her veto. There is a procedure for lawmakers to call themselves back, but that would be completely uncharted territory.

It is possible that because the original votes were taken on Friday, after the “last day” of the legislative session, HB 2054 may not pass constitutional muster. In recent years, the Kansas Supreme Court has repeatedly overridden the Legislature — which has limited input on which jurists serve on the court — on measures relating to education, taxation and health care.

Kelly is among a number of governors who has faced significant backlash for promoting containment measures to deal with COVID-19; Back in March, Kansas was among the first states to prohibit in-person K-12 education, a move Missouri later emulated after initially leaving school closures up to local officials. Pyle has told state media he believes Kelly broadly exceeded her authority with such moves, and that some means of recalling her from office ought to be studied. However, the recall effort didn’t seem to gain any traction before the Legislature finished its business on Friday.

Pyle and Eplee both acknowledged that they don’t know what would happen if Kelly vetoes the bill. For Pyle, at the end of the day, what matters is that the governor is kept in check.

“This is a free country, and (my constituents) for the most part are gonna take the precautions they want to ... We just don’t want big government telling us we can’t live our lives normally, the way we have been.”

Missouri recorded 11,988 cases of COVID-19 on Sunday, according to the Missouri Department of Health and Senior Services. The number of cases is up by 236 from 11,752 on Saturday, resulting in a 2% increase.

In Buchanan County, 617 people have tested positive for the virus as of Sunday, according to the Missouri Department of Health and Senior Services.

Mosaic Life Care has issued 4,998 tests in its service area, with 262 returning a positive result, 4,683 a negative result and 53 still pending. Fourteen people are inpatients in St. Joseph.

Kansas recorded 8,958 cases of COVID-19 on Friday, up from 8,539 on Wednesday. A total of 185 people have died. The Kansas Department of Health announced it is ending daily reporting and instead will release numbers on Mondays, Wednesdays and Fridays. 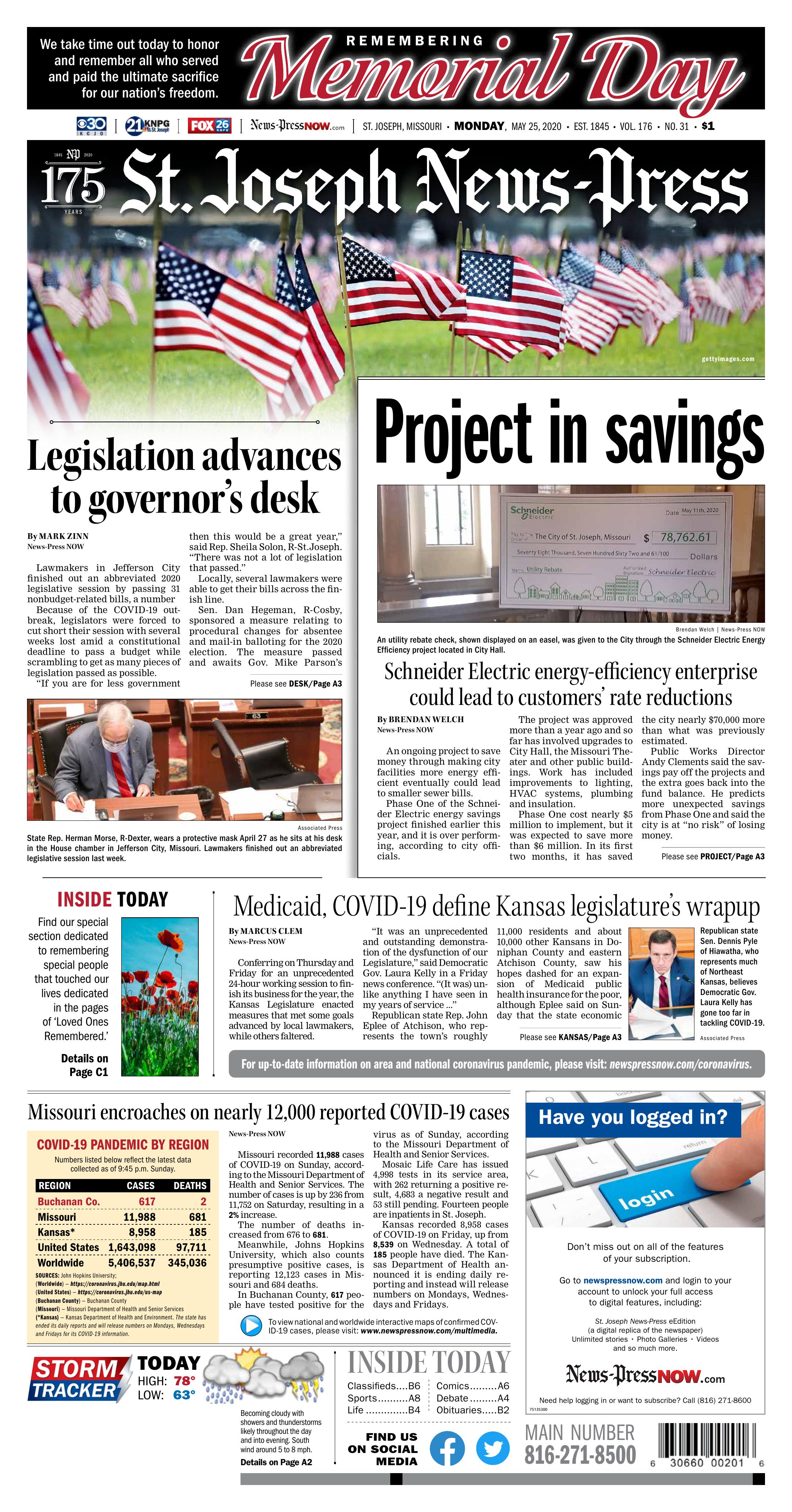