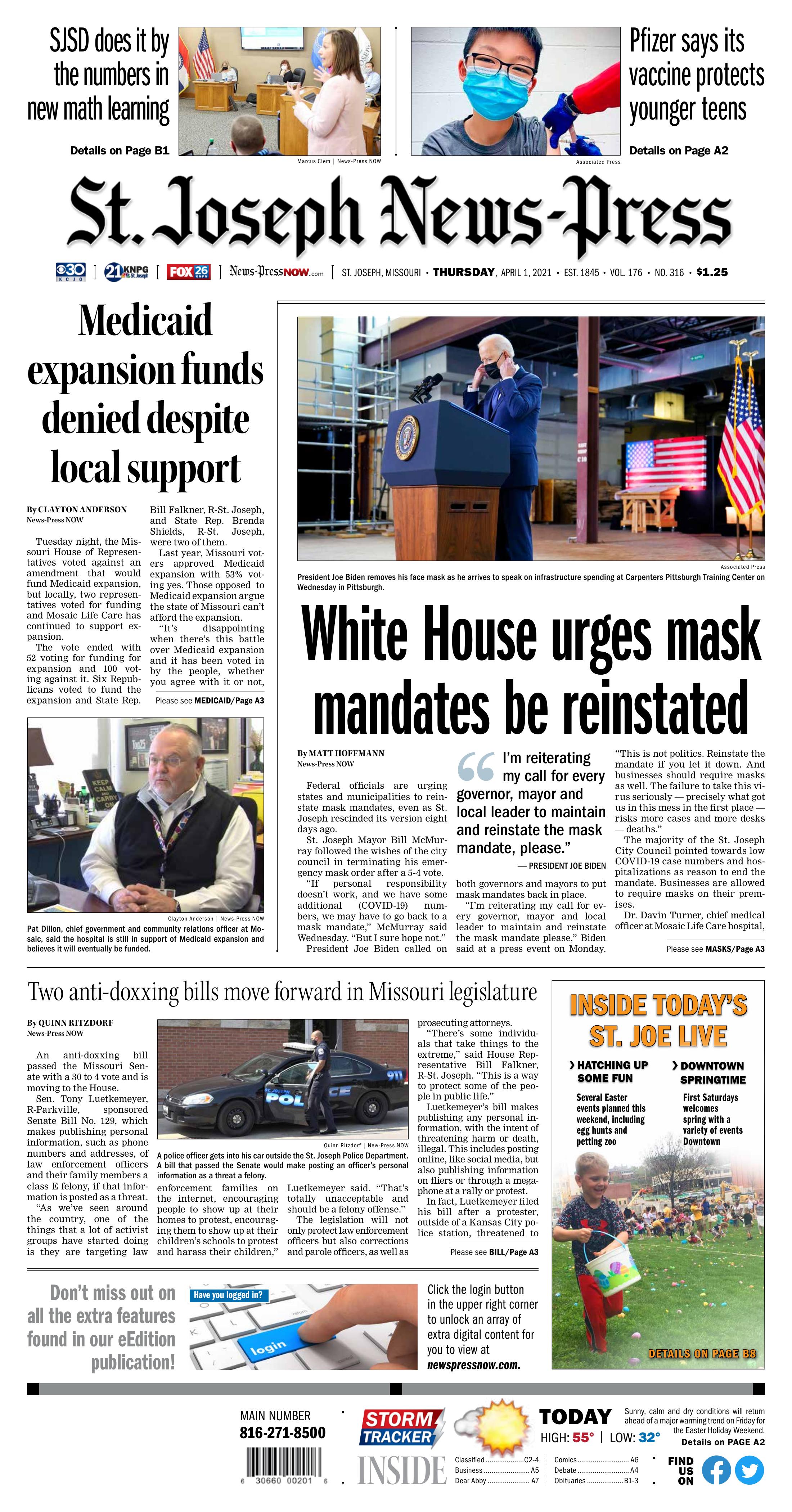 President Joe Biden removes his face mask as he arrives to speak on infrastructure spending at Carpenters Pittsburgh Training Center on Wednesday in Pittsburgh.

Federal officials are urging states and municipalities to reinstate mask mandates, even as St. Joseph rescinded its version eight days ago.

St. Joseph Mayor Bill McMurray followed the wishes of the city council in terminating his emergency mask order after a 5-4 vote.

“If personal responsibility doesn’t work, and we have some additional (COVID-19) numbers, we may have to go back to a mask mandate,” McMurray said Wednesday. “But I sure hope not.”

President Joe Biden called on both governors and mayors to put mask mandates back in place.

“I’m reiterating my call for every governor, mayor and local leader to maintain and reinstate the mask mandate please,” Biden said at a press event on Monday. “This is not politics. Reinstate the mandate if you let it down. And businesses should require masks as well. The failure to take this virus seriously — precisely what got us in this mess in the first place — risks more cases and more desks — deaths.”

The majority of the St. Joseph City Council pointed towards low COVID-19 case numbers and hospitalizations as reason to end the mandate. Businesses are allowed to require masks on their premises.

Dr. Davin Turner, chief medical officer at Mosaic Life Care hospital, told assembled media on Tuesday that he had some “concern” about the city ending its mandate.

“You know, we’re always going to have some concern,” Turner said. “That’s why we continue to require masking at our facility.”

Only two people were hospitalized with COVID-19 at the hospital in St. Joseph as of Wednesday. Seven new cases of COVID-19 were reported from Tuesday into Wednesday by the St. Joseph Health Department.

Dr. Rochelle Walensky, director for the Centers for Disease Control and Prevention, had strong words for the nation earlier this week about the continued danger from the virus.

Turner pushed back, saying the nation didn’t need to hear harsh rhetoric after a year of masking up with fatigue setting in.

“When the CDC director is on TV, almost crying for people to wear a mask, people really need a calm and cool voice,” Turner said. “We are just encouraging people to wear their masks.”

Pat Dillon, chief government and community relations officer at Mosaic, said the hospital is still in support of Medicaid expansion and believes it will eventually be funded.

“It’s disappointing when there’s this battle over Medicaid expansion and it has been voted in by the people, whether you agree with it or not, there’s been the vote and it’s now part of the constitution for the state,” Pat Dillon, chief government and community relations officer said.

Dillon said he does not agree with the sentiment that expansion will cost the state too much money as the Federal Government now will fund 95% of the cost.

“If you look at our state right now, I believe we maybe have the highest surplus we’ve ever had in the state, and that’s due to COVID money that is coming in,” Dillon said.

Gov. Mike Parson, who opposed the ballot measure, has said he would honor the result and move ahead with implementing the expansion, including money for it in his budget request. The money was removed by the House Budget Committee last week.

It has become the most contentious matter in the Missouri House this year, with many of the issues raised during the ballot initiative campaign being re-debated.

The Missouri Hospital Association last week circulated to lawmakers an independent survey it commissioned in January showing 18% of those who voted against the expansion now support its implementation. A Koch backed campaign has been urging legislators not to vote for the funding.

Dillon said he still believes the expansion eventually will go through, although it might be a lengthy battle.

“I think it could go to court, and that may be part of the strategy by the legislators who don’t like it by trying to get it in court and drag it out,” Dillon said. “I think Nebraska took two years to get theirs implemented after it passed, so you could see that in Missouri.”

A police officer gets into his car outside the St. Joseph Police Department. A bill that passed the Senate would make posting an officer’s personal information as a threat a felony.

An anti-doxxing bill passed the Missouri Senate with a 30 to 4 vote and is moving to the House.

Sen. Tony Luetkemeyer, R-Parkville, sponsored Senate Bill No. 129, which makes publishing personal information, such as phone numbers and addresses, of law enforcement officers and their family members a class E felony, if that information is posted as a threat.

“As we’ve seen around the country, one of the things that a lot of activist groups have started doing is they are targeting law enforcement families on the internet, encouraging people to show up at their homes to protest, encouraging them to show up at their children’s schools to protest and harass their children,” Luetkemeyer said. “That’s totally unacceptable and should be a felony offense.”

The legislation will not only protect law enforcement officers but also corrections and parole officers, as well as prosecuting attorneys.

“There’s some individuals that take things to the extreme,” said House Representative Bill Falkner, R-St. Joseph. “This is a way to protect some of the people in public life.”

Luetkemeyer’s bill makes publishing any personal information, with the intent of threatening harm or death, illegal. This includes posting online, like social media, but also publishing information on fliers or through a megaphone at a rally or protest.

In fact, Luetkemeyer filed his bill after a protester, outside of a Kansas City police station, threatened to disclose the school of an officer’s child.

“It’s really important that we protect our law enforcement and their families from any retribution that people might have for law enforcement officers just doing their job,” said House Representative Brenda Shields, R-St. Joseph.

A similar bill, House Bill No. 59, passed the House and will be moving to the Senate. However, this bill differs from Luetkemeyer’s in that it increases the act from a class C misdemeanor to a class A misdemeanor.

Sergeant Brad Kerns, the president of the local Fraternal Order of Police, said this anti-doxxing legislation is a step in the right direction. Some St. Joseph police officers have had their personal information posted online and received threats because of it. Kerns said no officer should have to go through that for just doing their job.

Luetkemeyer said he expects his bill to pass the House before the session ends on May 15.