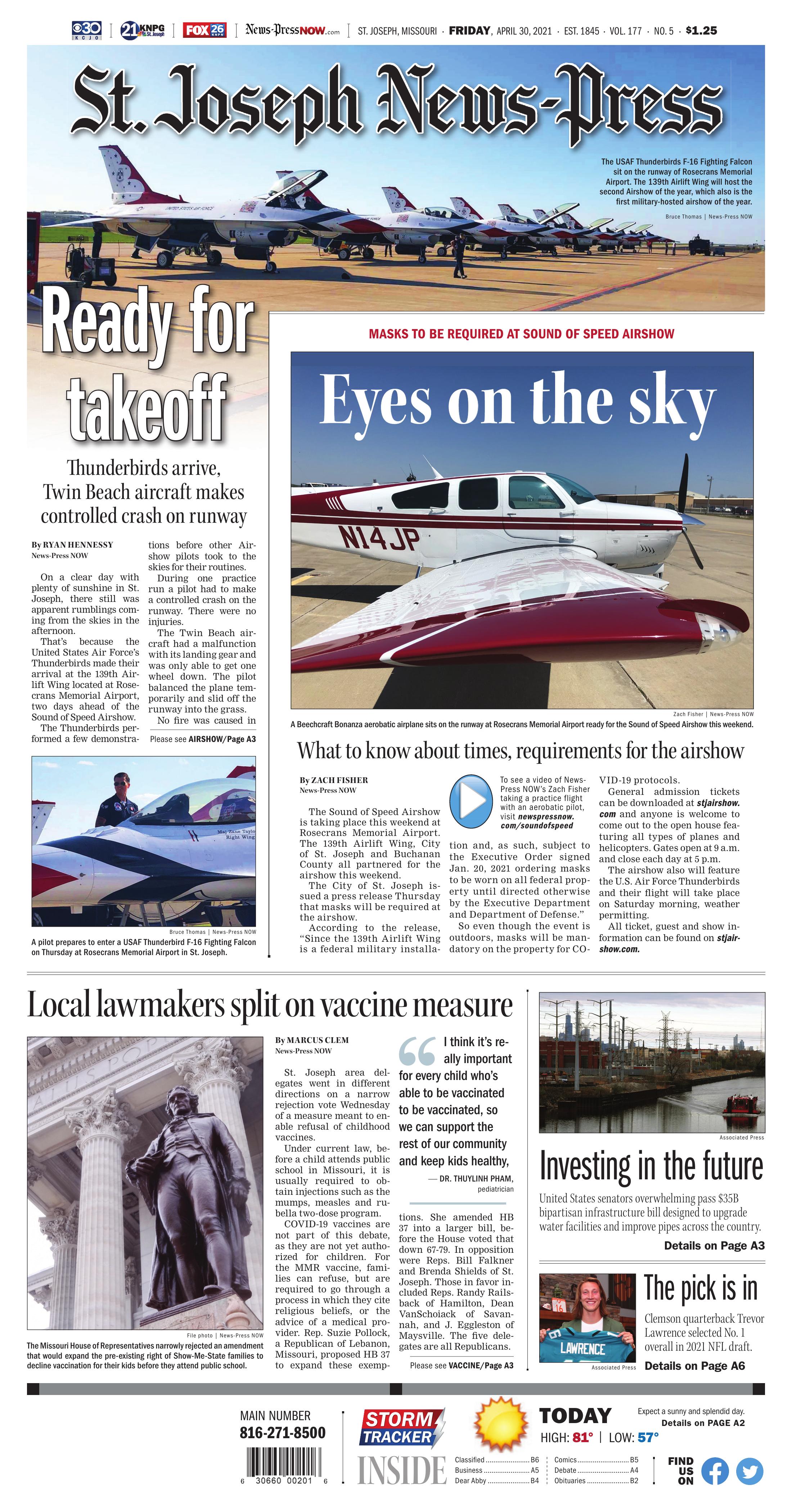 A controlled crash occurred at Rosecrans Memorial Aircraft due to a maintenance issue with the landing gear. Two individuals emerged from the rear side of the Twin Beach Aircraft shortly after sliding off the runway.

The USAF Thunderbirds F-16 Fighting Falcon sit on the runway of Rosecrans Memorial Airport. The 139th Airlift Wing will host the second Airshow of the year, which also is the first military-hosted airshow of the year.

On a clear day with plenty of sunshine in St. Joseph, there still was apparent rumblings coming from the skies in the afternoon.

That’s because the United States Air Force’s Thunderbirds made their arrival at the 139th Airlift Wing located at Rosecrans Memorial Airport, two days ahead of the Sound of Speed Airshow.

The Thunderbirds performed a few demonstrations before other Airshow pilots took to the skies for their routines.

During one practice run a pilot had to make a controlled crash on the runway. There were no injuries.

The Twin Beach aircraft had a malfunction with its landing gear and was only able to get one wheel down. The pilot balanced the plane temporarily and slid off the runway into the grass.

No fire was caused in the accident, however the fire department responded in under 60 seconds since they were aware that the controlled crash was taking place.

Military officials on the base reported the pilot was not injured, and the aircraft did not overturn.

To understand some of the things the Thunderbird pilots’ bodies undergo, consider a centrifuge amusement park ride that spins in a circle. The weight put on your body causes you to feel additional gravity. It’s known as g-force.

“The F-16 is capable of 9 gs, and so our demo actually displays some of that,” Brewer said. “It’s nine times the force of gravity, so you’re really fighting the gorilla that is sitting on your lap, and so your face distorts.

Turner has largely been involved in the fight against COVID-19, from the early days of responding to the outbreak, to planning a mass vaccination site that is responsible for giving around 30,000 doses of the vaccine to date.

He spoke to News-Press NOW ahead of his flight.

“Exciting, exciting, nothing like getting strapped into a rocket with wings,” Dr. Turner said. “I watched videos on how to breathe and hopefully not pass out or throw up.”

Other notable performances at the Airshow include a B52 flyover, Shetterly Squadron, Jim Pietz Aerobatic Bonanza, Aftershock Jet Truck, C-130 Airdrop Demonstration, among others to lead into the main act of the USAF Thunderbirds.

A Beechcraft Bonanza aerobatic airplane sits on the runway at Rosecrans Memorial Airport ready for the Sound of Speed Airshow this weekend.

The Sound of Speed Airshow is taking place this weekend at Rosecrans Memorial Airport. The 139th Airlift Wing, City of St. Joseph and Buchanan County all partnered for the airshow this weekend.

The City of St. Joseph issued a press release Thursday that masks will be required at the airshow.

According to the release, “Since the 139th Airlift Wing is a federal military installation and, as such, subject to the Executive Order signed Jan. 20, 2021 ordering masks to be worn on all federal property until directed otherwise by the Executive Department and Department of Defense.”

So even though the event is outdoors, masks will be mandatory on the property for COVID-19 protocols.

General admission tickets can be downloaded at stjairshow.com and anyone is welcome to come out to the open house featuring all types of planes and helicopters. Gates open at 9 a.m. and close each day at 5 p.m.

The airshow also will feature the U.S. Air Force Thunderbirds and their flight will take place on Saturday morning, weather permitting.

All ticket, guest and show information can be found on stjairshow.com.

The Missouri House of Representatives narrowly rejected an amendment that would expand the pre-existing right of Show-Me-State families to decline vaccination for their kids before they attend public school.

Under current law, before a child attends public school in Missouri, it is usually required to obtain injections such as the mumps, measles and rubella two-dose program.

COVID-19 vaccines are not part of this debate, as they are not yet authorized for children. For the MMR vaccine, families can refuse, but are required to go through a process in which they cite religious beliefs, or the advice of a medical provider. Rep. Suzie Pollock, a Republican of Lebanon, Missouri, proposed HB 37 to expand these exemptions. She amended HB 37 into a larger bill, before the House voted that down 67-79. In opposition were Reps. Bill Falkner and Brenda Shields of St. Joseph. Those in favor included Reps. Randy Railsback of Hamilton, Dean VanSchoiack of Savannah, and J. Eggleston of Maysville. The five delegates are all Republicans.

“I think it’s really important for every child who’s able to be vaccinated to be vaccinated, so we can support the rest of our community and keep kids healthy, and in school,” said Dr. Thuylinh Pham.

Pham, a pediatrician and Missouri legislative chair for the American Academy of Pediatrics, said the MMR vaccine doesn’t always immunize a patient; she herself had to receive four rounds of MMR vaccine before tests showed she had developed immunity. For this reason, it is advised for as many to get the vaccine as possible, so as to shield those who cannot or did not get immunized for some reason. This is the concept of “herd immunity.”

Falkner, who represents the heart of St. Joseph, said the main reason for his “no” vote is the common practice of taking unrelated, “controversial” ideas and folding them into omnibus legislation, so as to make the new ideas easier to pass. The outcome, intended or not, is to bog down mainstream bills most people will support with detritus that could sink the entire bill. Therefore a “no” vote is needed to strip them back out.

The underlying cause — parental choice for their own children’s medical needs — is one Falkner said he agrees with. However, any possible support for this idea would require further consultations with public education leaders.

“You have to put yourself in the shoes of those in public education who are trying to protect our kids,” he said.

Railsback, who represents Clinton County and his own Caldwell County, said he personally believes public officials have a duty to promote vaccination as much as possible, but it needs to be implemented through persuasion and public education.

“Most of the time, if people look at this objectively, learn the facts, they’re going to decide the right thing to do is get vaccinated,” he said. “But if we say, right off the bat, ‘You have to,’ then the reaction by some people is, ‘You can’t make me.’ And we go right past their ability to be educated and persuaded.”

Preparing For The Air Show