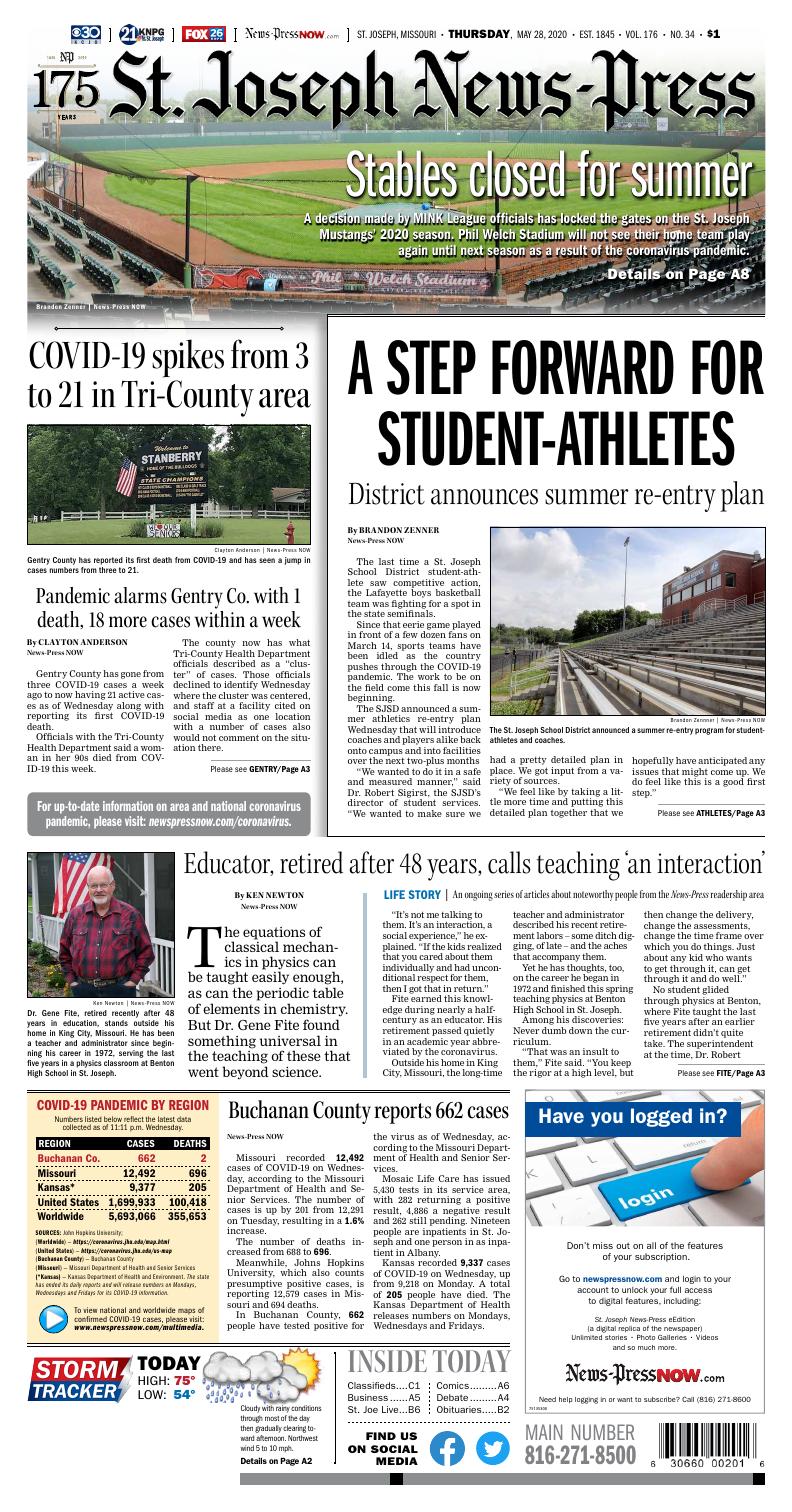 A decision made by MINK League officials has locked the gates on the St. Joseph Mustangs’ 2020 season. Phil Welch Stadium will not see their home team play again until next season as a result of the coronavirus pandemic.

Details on Page A8

The last time a St. Joseph School District student-athlete saw competitive action, the Lafayette boys basketball team was fighting for a spot in the state semifinals.

Since that eerie game played in front of a few dozen fans on March 14, sports teams have been idled as the country pushes through the COVID-19 pandemic. The work to be on the field come this fall is now beginning.

“We wanted to do it in a safe and measured manner,” said Dr. Robert Sigirst, the SJSD’s director of student services. “We wanted to make sure we had a pretty detailed plan in place. We got input from a variety of sources.

“We feel like by taking a little more time and putting this detailed plan together that we hopefully have anticipated any issues that might come up. We do feel like this is a good first step.”

The district will have two phases of openings — which apply to Central, Lafayette and Benton — in June and July to “help our student-athletes workout and compete in the safest manner possible,” as the official plan states.

Phase one will include only outdoor conditioning from June 15-28. A maximum of 60 athletes will be allowed per session and must be split in three groups of 20. Those groups will split off into weight and strength activities, conditioning and agilities. No balls or sport-specific work will be allowed with reacclimating students to fitness as the priority.

“I think it’s a big step for the district,” Central athletics director Dave Lau said. “It gives hope to our student-athletes. August is gonna be here sooner than later. We hope things return to somewhat normal.”

Measures are being taken to ensure the proper preparation is done. That will include daily temperature checks of participants, no water fountain or locker room usage, and physical distancing will be enforced.

“We wanna take all those steps we can to make sure our students our safe but at the same time allow them to start to get back to some level of activities,” Sigrist said.

The SJSD made the decision in coordination with the MEC and Suburban Conferences, though schools will be allowed to continue if others must suspend activities.

But hopefully come fall, athletes will return to the field and court with a sense of normalcy returned.

“At some point we’ve gotta take the first steps to getting back. We hope that nothing happens that would cause any derailment to the plan or cause any steps backward,” Sigrist said. “We hope the steps that have been taken … slowed the spread of the disease to the point where we are able to get back to some normalcy later on.”

Gentry County has reported its first death from COVID-19 and has seen a jump in case numbers from three to 21.

Gentry County has gone from three COVID-19 cases a week ago to now having 21 active cases as of Wednesday along with reporting its first COVID-19 death.

Officials with the Tri-County Health Department said a woman in her 90s died from COVID-19 this week.

The county now has what Tri-County Health Department officials described as a “cluster” of cases. Those officials declined to identify Wednesday where the cluster was centered, and staff at a facility cited on social media as one location with a number of cases also would not comment on the situation there.

Tri-County Health Department officials said the all active cases in Gentry County are resulting in mild symptoms and added they have performed contact tracing for those who have tested positive in the jump of new cases.

Lilli Parsons, director in Stanberry for the Tri-County Health Department, said staff have been informing citizens about social distancing through their Facebook page.

Parsons said she hopes the jump of numbers within the rural community will reinforce the need for people to be serious and cautious about what they are doing in regards to social distancing.

Dr. Gene Fite, retired recently after 48 years in education, stands outside his home in King City, Missouri. He has been a teacher and administrator since beginning his career in 1972, serving the last five years in a physics classroom at Benton High School in St. Joseph.

The equations of classical mechanics in physics can be taught easily enough, as can the periodic table of elements in chemistry. But Dr. Gene Fite found something universal in the teaching of these that went beyond science.

“It’s not me talking to them. It’s an interaction, a social experience,” he explained. “If the kids realized that you cared about them individually and had unconditional respect for them, then I got that in return.”

Fite earned this knowledge during nearly a half-century as an educator. His retirement passed quietly in an academic year abbreviated by the coronavirus.

Outside his home in King City, Missouri, the long-time teacher and administrator described his recent retirement labors – some ditch digging, of late – and the aches that accompany them.

Yet he has thoughts, too, on the career he began in 1972 and finished this spring teaching physics at Benton High School in St. Joseph.

Among his discoveries: Never dumb down the curriculum.

“That was an insult to them,” Fite said. “You keep the rigor at a high level, but then change the delivery, change the assessments, change the time frame over which you do things. Just about any kid who wants to get through it, can get through it and do well.”

No student glided through physics at Benton, where Fite taught the last five years after an earlier retirement didn’t quite take. The superintendent at the time, Dr. Robert Newhart, brought him on board. Newhart had many years ago been one of Fite’s students.

You won’t find physics among the required courses for graduation at Benton. Still, 130 students had been enrolled in six sections at the school.

“That tells you that you make it hard and you make it challenging and you give the kids the support they need, and they will take those difficult classes because they want something worthwhile,” the teacher said.

In 1968, Fite graduated from Savannah High School, an athlete in addition to being a curious student. He would eventually get a trio of science and education-related degrees from Northwest Missouri State University, later completing his doctorate in school administration at the University of Missouri-Kansas City.

Teaching science at a number of schools in the region, including at Bode Middle School in St. Joseph, he worked for years in college classrooms and became a principal in the Savannah district and a superintendent at Union Star.

Between 1998 and 2013, he held a series of positions at the school district in Kansas City, Kansas, finally as principal of the Sumner Academy of Arts and Sciences.

“It was like being in a candy shop,” Fite said of the job offerings in his field. “You know, all these opportunities there, and it took a lot to keep me mentally occupied. If something opened up and it was a new experience, I just jumped on it.”

He earned accolades along the way, most recently as a St. Joseph School District Teacher of the Year finalist this year. But Fite said his greatest reward came in being around the students.

“It was a blessing, to be able to get up in front of a group of kids and interact with them. I consider each of those children special, unique creations. Every one different from me,” he said.

“It turned out that in the classroom, working with the kids, that was the most rewarding for me. I’d keep doing it, but it takes a lot of energy.”

Missouri recorded 12,492 cases of COVID-19 on Wednesday, according to the Missouri Department of Health and Senior Services. The number of cases is up by 201 from 12,291 on Tuesday, resulting in a 1.6% increase.

In Buchanan County, 662 people have tested positive for the virus as of Wednesday, according to the Missouri Department of Health and Senior Services.

Mosaic Life Care has issued 5,430 tests in its service area, with 282 returning a positive result, 4,886 a negative result and 262 still pending. Nineteen people are inpatients in St. Joseph and one person in as inpatient in Albany.

Kansas recorded 9,337 cases of COVID-19 on Wednesday, up from 9,218 on Monday. A total of 205 people have died. The Kansas Department of Health releases numbers on Mondays, Wednesdays and Fridays. 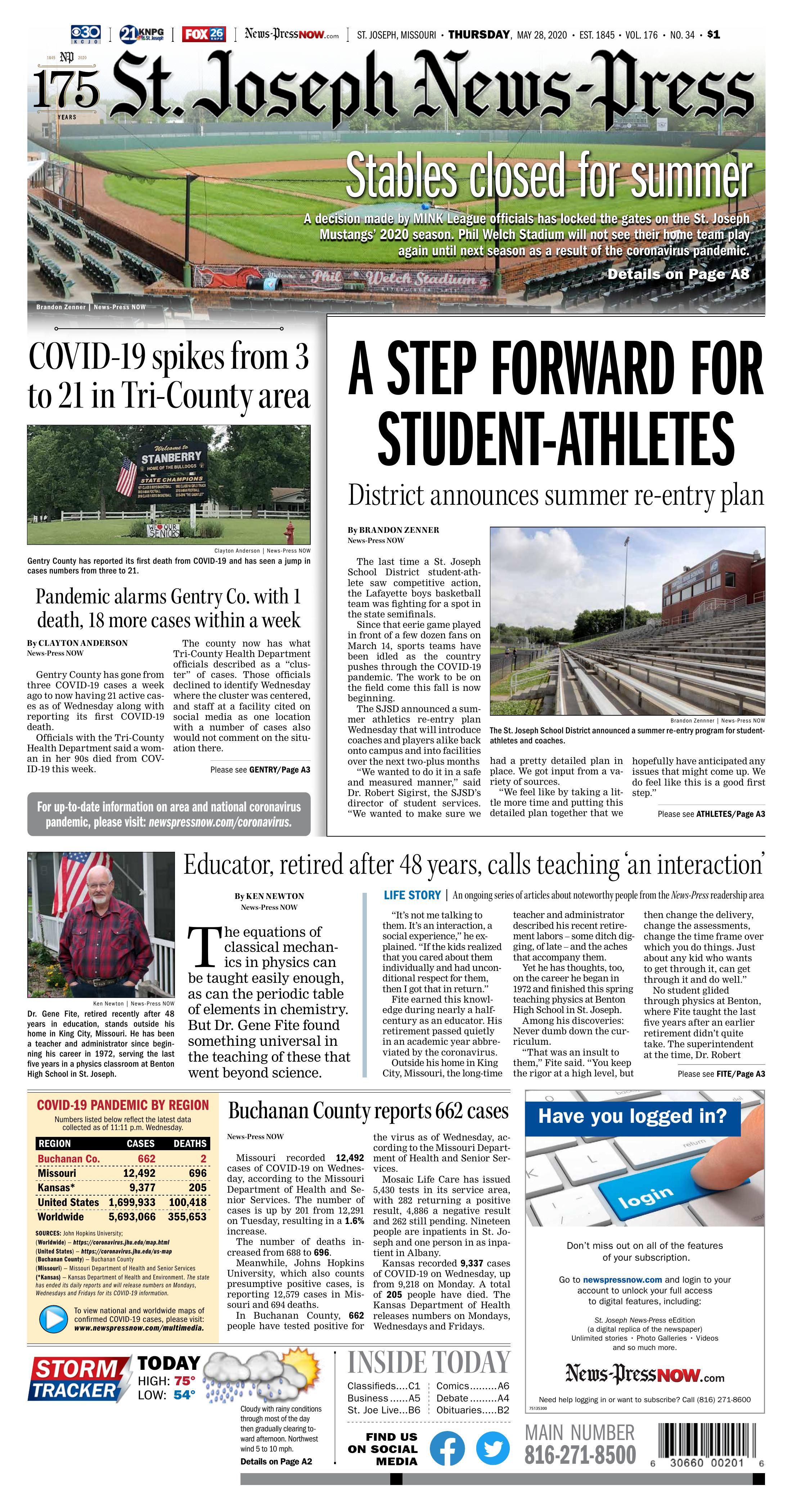