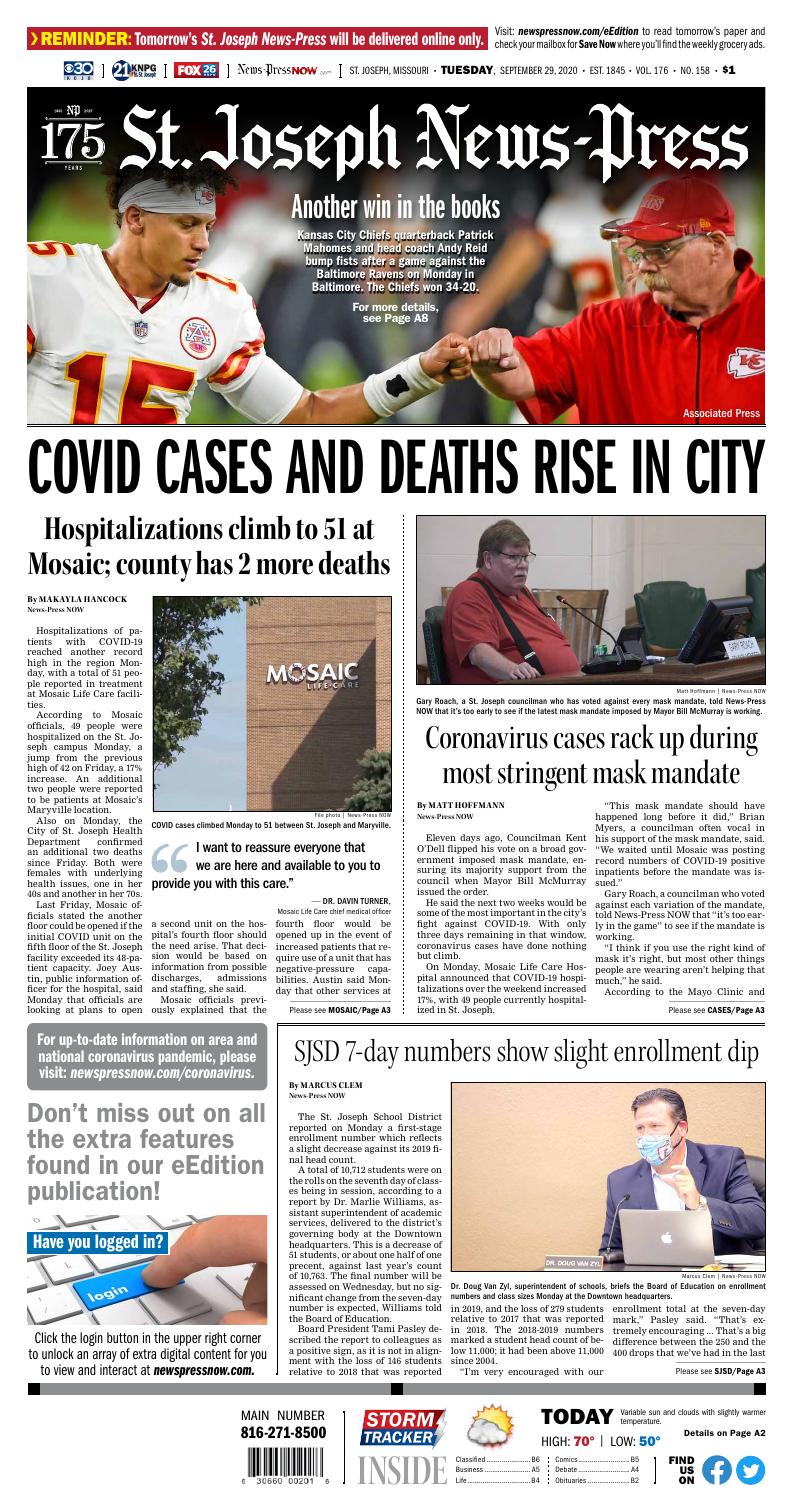 COVID cases climbed Monday to 51 between St. Joseph and Maryville.

Hospitalizations of patients with COVID-19 reached another record high in the region Monday, with a total of 51 people reported in treatment at Mosaic Life Care facilities.

According to Mosaic officials, 49 people were hospitalized on the St. Joseph campus Monday, a jump from the previous high of 42 on Friday, a 17% increase. An additional two people were reported to be patients at Mosaic’s Maryville location.

Also on Monday, the City of St. Joseph Health Department confirmed an additional two deaths since Friday. Both were females with underlying health issues, one in her 40s and another in her 70s.

Last Friday, Mosaic officials stated the another floor could be opened if the initial COVID unit on the fifth floor of the St. Joseph facility exceeded its 48-patient capacity. Joey Austin, public information officer for the hospital, said Monday that officials are looking at plans to open a second unit on the hospital’s fourth floor should the need arise. That decision would be based on information from possible discharges, admissions and staffing, she said.

Mosaic officials previously explained that the fourth floor would be opened up in the event of increased patients that require use of a unit that has negative-pressure capabilities. Austin said Monday that other services at Mosaic are not being impacted by the increased number of COVID-19 patients and that elective surgeries are continuing at this time.

In a video posted on the hospital’s Facebook page Friday, Dr. Davin Turner, Mosaic Life Care chief medical officer, said other parts of the hospital are being used to house COVID-19 patients.

“You will see us utilizing this extra space in our E.R. as we did early on in the COVID pandemic. This allows [our] caregivers to be able to triage and place folks that are coming here to receive their care in a more rapid fashion,” Turner said.

Turner went on to say that the hospital still is able to accept all patients at this time.

“I want to reassure everyone that we are here and available to you to provide you with this care. It would be very important to not delay care, because the number of positive patients in the community with COVID has gone up,” Turner said. “Again, as a facility we are able to accept patients and we are not turning patients away.”

Dr. Doug Van Zyl, superintendent of schools, briefs the Board of Education on enrollment numbers and class sizes Monday at the Downtown headquarters.

The St. Joseph School District reported on Monday a first-stage enrollment number which reflects a slight decrease against its 2019 final head count.

A total of 10,712 students were on the rolls on the seventh day of classes being in session, according to a report by Dr. Marlie Williams, assistant superintendent of academic services, delivered to the district’s governing body at the Downtown headquarters. This is a decrease of 51 students, or about one half of one precent, against last year’s count of 10,763. The final number will be assessed on Wednesday, but no significant change from the seven-day number is expected, Williams told the Board of Education.

“I’m very encouraged with our enrollment total at the seven-day mark,” Pasley said. “That’s extremely encouraging ... That’s a big difference between the 250 and the 400 drops that we’ve had in the last couple of years.”

YMCA won’t be sold to SJSD

Ron Hook, in his capacity as chair of the YMCA of St. Joseph Board of Directors, with local YMCA CEO Sue White, attended the Monday meeting to get the official word: The school district won’t be buying the Downtown YMCA building at 315 S. Sixth St., at least not now.

Larry Koch, chair of the board’s Facilities Planning Committee, thanked White and Hook for bringing the opportunity to them. The board reviewed how various committee research efforts have revealed that between $1 million and $3 million would need to be invested in the YMCA building to bring it up to the purposes the district had in mind. It has been determined that the district’s current financial position means such a move wouldn’t be prudent.

“As much as I would like to see that building stay open, because I think it is a great asset for the community, I think at this time it’s actually beyond ... our mission of educating children, and I don’t see that,” Koch said. “We don’t have the finances for it. I don’t think we should let them hang on anymore, we should let them know what our intentions are.”

Hook said the YMCA appreciates the school board “doing your due diligence.”

“You’re looking after the taxpayers’ money, and that’s the right thing to do,” he said. “We appreciate everything you guys have done and the intensive overview of going down and looking at the building ... We were definitely up front with it, we knew that it was going to be a costly fix and repair.”

Gary Roach, a St. Joseph councilman who has voted against every mask mandate, told News-Press NOW that it’s too early to see if the latest mask mandate imposed by Mayor Bill McMurray is working.

Eleven days ago, Councilman Kent O’Dell flipped his vote on a broad government imposed mask mandate, ensuring its majority support from the council when Mayor Bill McMurray issued the order.

He said the next two weeks would be some of the most important in the city’s fight against COVID-19. With only three days remaining in that window, coronavirus cases have done nothing but climb.

“This mask mandate should have happened long before it did,” Brian Myers, a councilman often vocal in his support of the mask mandate, said. “We waited until Mosaic was posting record numbers of COVID-19 positive inpatients before the mandate was issued.”

Gary Roach, a councilman who voted against each variation of the mandate, told News-Press NOW that “it’s too early in the game” to see if the mandate is working.

“I think if you use the right kind of mask it’s right, but most other things people are wearing aren’t helping that much,” he said.

According to the Mayo Clinic and public health authorities, even cloth masks help prevent the spread of COVID-19. The Centers for Disease Control and Prevention has called for mask usage among the general public since at least April.

Roach told News-Press NOW that he’ll support McMurray’s order for now, and will reassess his position when the order comes up for renewal in just over two weeks.

So far, the Buchanan County Commission has resisted issuing a government-imposed mandate. But after the release of Monday’s coronavirus figures, Commissioner Ron Hook said he would support a countywide order.

That style of order would apply to those areas outside the St. Joseph city limits but still inside Buchanan County. The commission previously declined to issue such a mandate on the day the city’s order went into effect. A county mandate could create duplicative orders for those inside the city limits.

Presiding Commissioner Lee Sawyer said he “strongly encourages” people wear masks, but he did not directly say whether or not he’d vote for a government mandate. Commissioner Scott Burnham didn’t respond to a request for comment for this story. 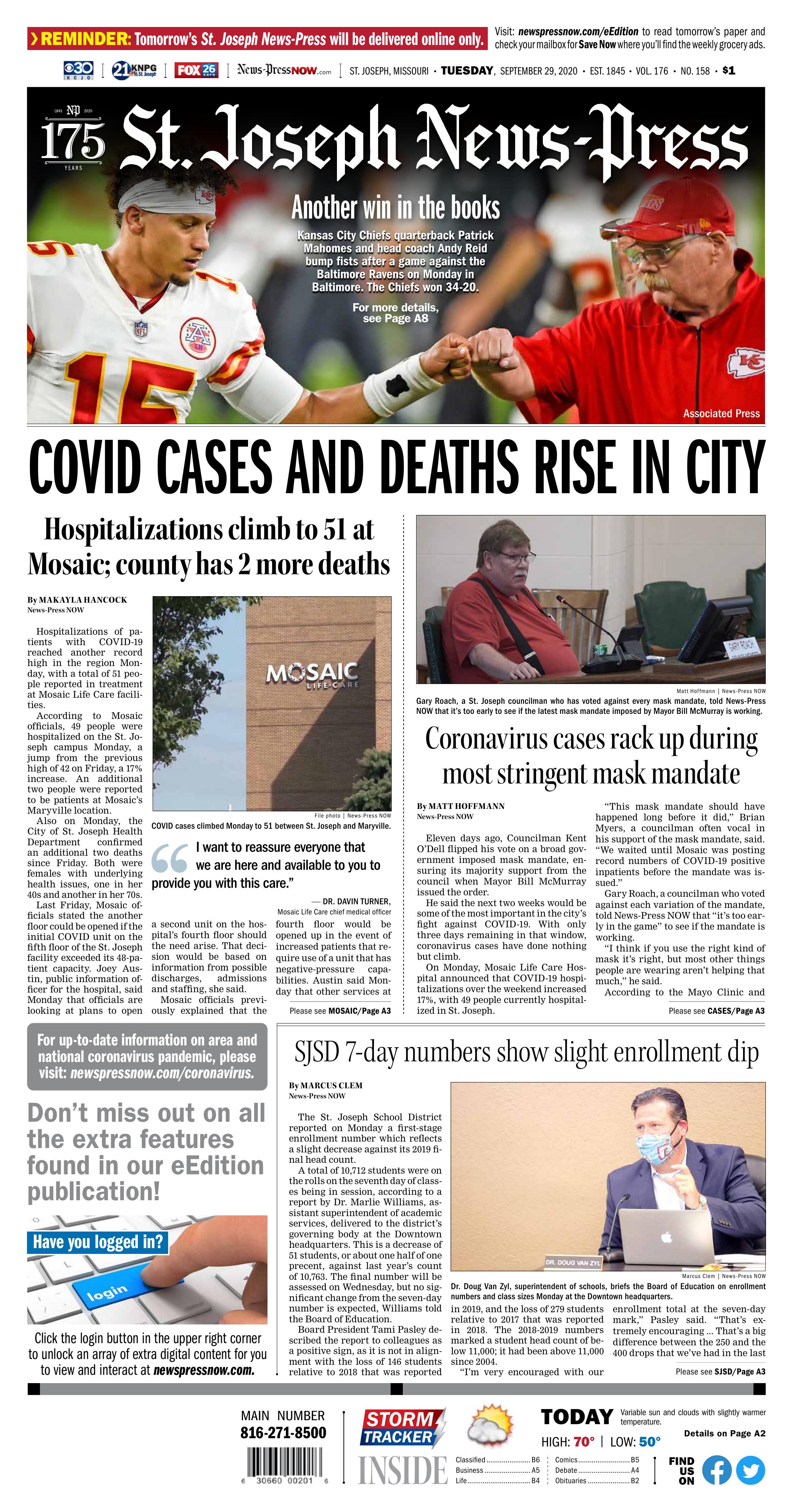